Net immigration to Britain was 212,000 in the year to June – as Jeremy Corbyn faces fresh pressure over failure to pledge an end to EU free movement rules

Net immigration is running at over 200,000 – amid fresh pressure on Jeremy Corbyn over his failure to pledge an end to free movement.

Official figures show net long-term inflow to the UK was 212,000 in the year to June.

That was down from 260,000 in the 12 months to March – but still well above the government’s previous aspiration of the ‘tens of thousands’.

The news emerged as the Tories stepped up their attack on Labour over its flip-flopping on immigration.

The party promised at the 2017 election that EU free movement rules would end when the UK leaves the EU.

But its manifesto this time makes no such commitment, and instead suggests free movement could continue because of the ‘social and economic benefits’. 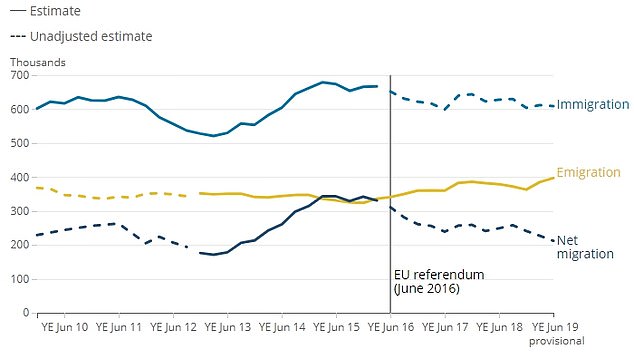 Official figures show net long-term inflow to the UK was 212,000 in the year to June

Pressed repeatedly on the issue during an interview this week, Mr Corbyn said there would ‘obviously movement of people, probably related to economic and social needs’.

Pushed again on whether free movement would continue, he said there would be ‘a lot of movement’.

The Office for National Statistics (ONS) figures show 609,000 people moved to the UK intending to stay more than 12 months in the year to June, and 397,000 people left.

This is largely because of a fall in EU immigration, which remains at its lowest level since the year ending March 2013, according to the release.

Since 2016, there has been a decline in immigration for work while people coming to the UK to study has gradually increased, the report added.

The figures are classed as experimental estimates after the ONS admitted earlier this year it had been underestimating some EU net migration data since 2016.

An ONS spokesman said: ‘Our best assessment using all data sources is that long-term immigration, emigration and net migration have remained broadly stable since the end of 2016. However, we have seen different patterns for EU and non-EU citizens.

The Tories claimed today that failure to leave the EU and end free movement could increase the UK’s benefits bill by £4billion over the next decade. 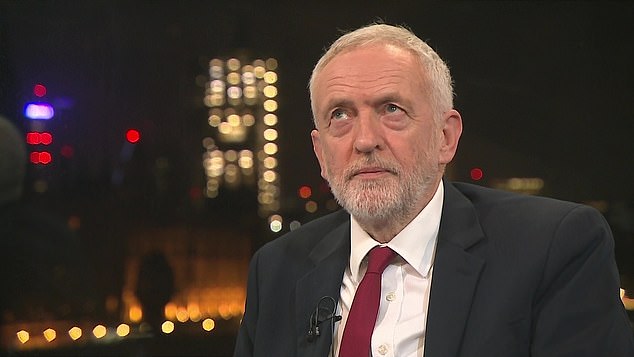 Jeremy Corbyn repeatedly refused to rule out keeping free movement rules in a BBC interview this week, saying there would ‘obviously be movement of people, probably related to economic and social needs’

Work and Pensions Secretary Therese Coffey said: ‘Jeremy Corbyn has no plan for Brexit. The only policy he has committed to is maintaining free movement in all circumstances. He is completely out of touch with the concerns of ordinary voters.

‘This analysis highlights the cost of Corbyn’s immigration policy to our public services.’