Media giants Netflix and Disney are being urged to boycott Northern Ireland as the abortion row in Hollywood spread to the UK.

The powerful broadcasters have come under pressure from pro-choice campaigners to stop filming there because of it’s strict laws on terminating a pregnancy.

In the US both Netflix and Disney have joined more than 100 film stars by threatening to withdraw from the state of Georgia over a proposed abortion ban.

But women’s rights groups in the UK have pointed out that many actors and the two media giants had been happy to work in Northern Ireland, where woman who have an abortion can face life in jail.

Kerry Abel, chairman of the Abortion Rights charity in the UK said filmmakers should consider Northern Ireland in ‘the same light’ as Georgia. 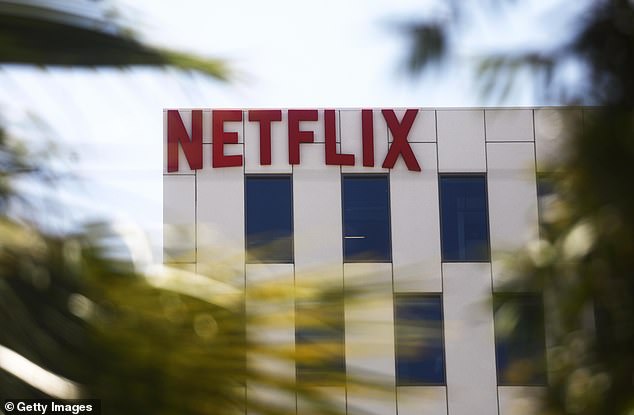 In the US both Netflix (pictured, its offices in Los Angeles) and Disney have joined more than 100 film stars by threatening to withdraw from the state of Georgia over a proposed abortion ban. 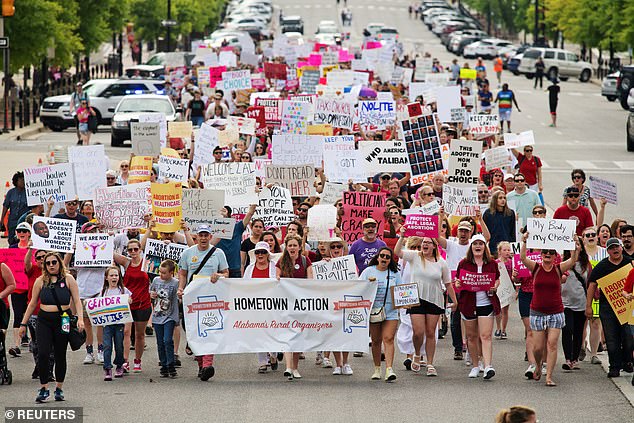 The row over new anti abortion laws has sparked mass protests across the US. Pictured: Activists in Montgomery, Alabama

The film industry has boomed in Northern Ireland since it was chosen as the setting for Game of Thrones.

Recent movies have included The Lost City of Z, and High-Rise.

Ms Abel told the Daily Telegraph: ‘Those benefiting from tax breaks in Northern Ireland, the likes of Netflix and Disney, should know that women who pay their taxes are not getting access to healthcare on the NHS for their abortions.

‘If they think that it is not acceptable to operate in Georgia they should consider Northern Ireland in the same light.’

Abortions are illegal in Northern Ireland except in cases where a woman’s health is at risk, or if having a baby would leave her a ‘physical or mental wreck’. 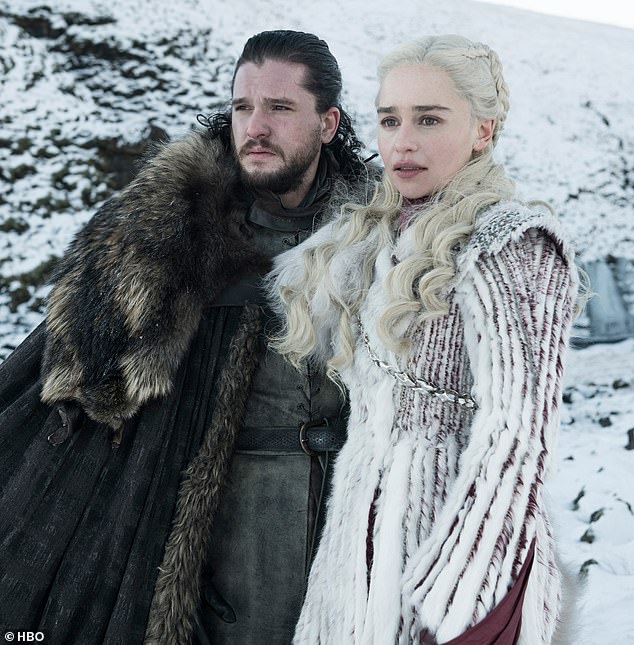 In 2017 almost 1,000 women from Northern Ireland travelled to England and Wales to terminate their pregnancies.

According to the Telegraph it is understood that Netflix executives believe the situation is different in Northern Ireland because women have been denied abortions there for hundreds of years, while women in Georgia stand to have their rights taken away.

Georgia’s Republican governor Brian Kemp signed the ‘heartbeat bill’ into law on May 7 and it is due to take effect on January 1 if it survives court challenges.

The passage of the bill in Georgia has sparked outrage in Hollywood, as it is the country’s top movie-making location with a film industry worth £7.5billion a year and which generates 92,000 jobs. 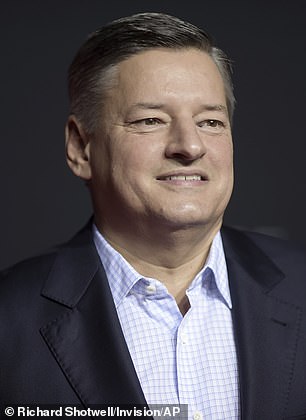 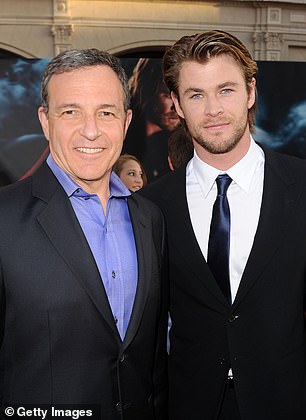 Chief content officer Ted Sarandos (left) said that Netflix would ‘rethink our entire investment in Georgia ‘if legislation known as the ‘heartbeat bill’ came into effect. Walt Disney Co Chief Executive Bob Iger (pictured with the actor Chris Hemsworth, right) said it would be ‘very difficult’ for the company to keep filming in Georgia if the abortion law went through 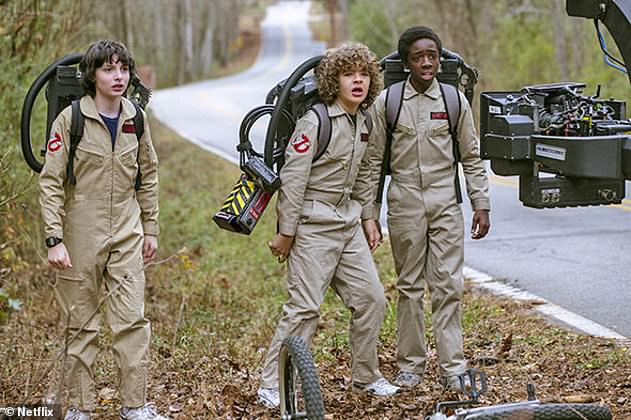 The popular Netflix series Stranger Things was filmed in Georgia

Producers of movies including box-office smashes Black Panther, The Hunger Games and Avengers: Infinity War have been lured there by tax breaks.

Actors including Amy Schumer, Ben Stiller and Alec Baldwin have signed a letter warning they would ‘do everything in our power to move our industry to a safer state for women.’

Netflix have said it will be ‘rethinking’ its entire operation and would wok with groups to contest the law in court.

It currently has five projects filming in the state: The Liberator, Christmas on the Square, Holidate, Season 2 of Insatiable and Season 3 of Ozark. 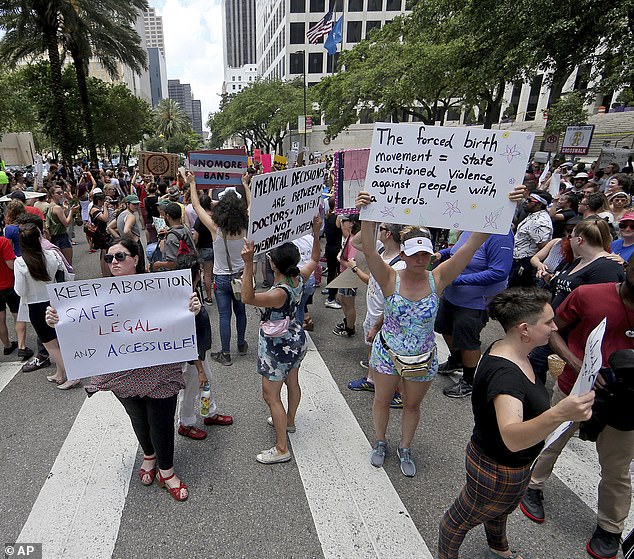 On Wednesday hundreds of abortion-rights advocates took to the streets to protest the anti-abortion legislation. Protesters pictured on May 22 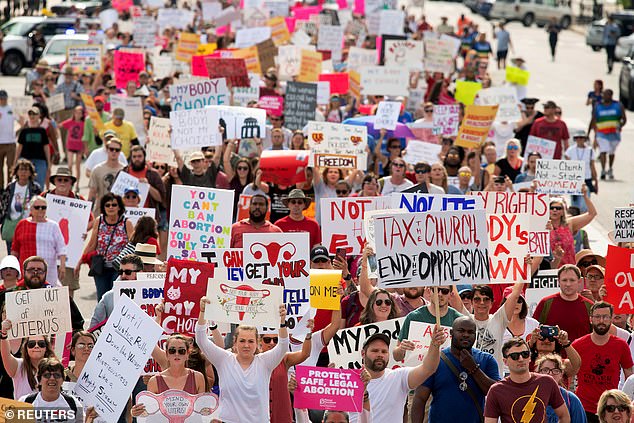 The money-spinning hit series Stranger Things has previously used Atlanta and Jackson in Georgia as locations for filming.

Netflix executive Ted Sarandos said: ‘We have many women working on productions in Georgia whose rights, along with millions of others’, will be severely restricted by this law.’

Disney’s chief executive Bob Iger said: ‘Many people who work for us will not want to work there and we will have to heed their wishes. We are watching it very carefully.’

Yesterday WarnerMedia and NBCUniversal become the latest major Hollywood players to threaten to boycott Georgia as a filming location should its new restrictive abortion law be upheld.

WarnerMedia, which includes HBO, Turner, and Warner Bros. among its subsidiaries, is currently filming HBO’s ‘The Outsider’ and ‘Lovecraft Country,’ and Warner Bros. film ‘The Conjuring 3’ in the state. 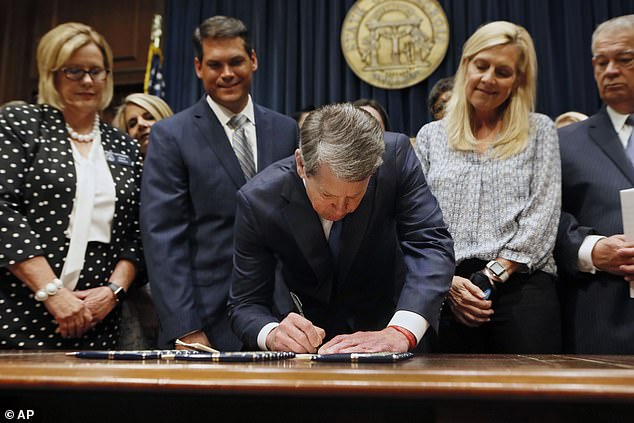 In a statements, WarnerMedia said: ‘We will watch the situation closely and if the law holds we will reconsider Georgia as the home to any new productions.

‘We operate and produce work in many states and within several countries at any given time and while that doesn’t mean we agree with every position taken by a state or a country and their leaders, we do respect due process.’

Comcast Corp’s NBCUniversal said in a separate statement: ‘If any of these laws are upheld, it would strongly impact our decision making on where we produce our content in the future.

‘We fully expect that the heartbeat bills and similar laws in various states will face serious legal challenges and will not go into effect while the process proceeds in court.’

Georgia is one of eight states to pass anti-abortion legislation this year for the purpose of inducing the U.S. Supreme Court to overturn Roe v. Wade, the 1973 landmark case that established a woman’s right to terminate her pregnancy.

In 1973, the U.S. Supreme Court recognized a woman’s constitutional right to an abortion in Roe v. Wade. The landmark ruling legalized abortion nationwide but divided public opinion and has been under attack ever since.

The case was filed in 1971 by Norma McCorvey, a 22-year-old living in Texas who was unmarried and seeking a termination of her unwanted pregnancy.

Because of state legislation preventing abortions unless the mother’s life is at risk, she was unable to undergo the procedure in a safe and legal environment.

So McCorvey sued Henry Wade, the Dallas county district attorney, in 1970. The case went on to the Supreme Court, under the filing Roe vs Wade, to protect McCorvey’s privacy.

The Supreme Court handed down the watershed 7-2 decision that a woman’s right to make her own medical decisions, including the choice to have an abortion, is protected under the 14th Amendment.

In particular, that the Due Process Clause of the the 14th Amendment provides a fundamental ‘right to privacy’ that protects a woman’s liberty to choose whether or not to have an abortion.

The landmark ruling saw abortions decriminalized in 46 states, but under certain specific conditions which individual states could decide on. For example, states could decide whether abortions were allowed only during the first and second trimester but not the third (typically beyond 28 weeks).

Among pro-choice campaigners, the decision was hailed as a victory which would mean fewer women would become seriously – or even fatally – ill from abortions carried out by unqualified or unlicensed practitioners. Moreover, the freedom of choice was considered a significant step in the equality fight for women in the country. Victims of rape or incest would be able to have the pregnancy terminated and not feel coerced into motherhood.

However, pro-lifers contended it was tantamount to murder and that every life, no matter how it was conceived, is precious. Though the decision has never been overturned, anti-abortionists have prompted hundreds of states laws since then narrowing the scope of the ruling.

One such was the Partial-Birth Abortion Ban Act signed by President George W. Bush in 2003, which banned a procedure used to perform second-trimester abortions.

Following the ruling, McCorvey lived a quiet life until the 1980s when she revealed herself to be Jane Roe. McCorvey became a leading, outspoken pro-abortion voice in American discourse, even working at a women’s clinic where abortions were performed.

However,  she performed an unlikely U-turn in 1995, becoming a born again Christian and began traveling the country speaking out against the procedure.

In 2003, a she filed a motion to overturn her original 1973 ruling with the U.S. district court in Dallas. The motion moved through the courts until it was ultimately denied by the Supreme Court in 2005.

McCorvey died at an assisted living home in Texas in February 2017, aged 69.

Georgia’s Republican governor signed legislation outlawing abortion if a doctor can detect a fetal heartbeat, part of a concerted effort to restrict abortion rights in states across the country.

Under the ban doctors will be prosecuted for flouting the rules.

Abortion-rights supporters see the heartbeat bills as virtual bans because fetal heartbeats can be detected as early as six weeks, when women may not be aware they are pregnant.

Anti-abortion campaigners have intensified their efforts since Donald Trump was elected president and appointed two conservative justices to the US Supreme Court, hopeful they can convince the right-leaning court to re-examine Roe v. Wade.

Courts have blocked the Iowa and Kentucky laws, and the others face legal challenges.