The Victorian government is considering its options for a purpose-built accommodation hub outside the CBD, to replace the existing hotel quarantine scheme, Premier Daniel Andrews says.

“It’s more than just scoping it, we are going to get on and build a facility,” Mr Andrews said. 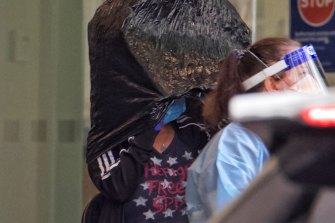 A Holiday Inn guest leaves the hotel with a bag over their head on Tuesday morning. Credit:Luis Ascui

Mr Andrews said the proposed quarantine facility would be a cabin-style environment where there is ample fresh air.

“I think there is a compelling argument for this,” he said.

“The two obvious candidates – Avalon Airport, you’ve got space and you’ve got an international terminal and of course Melbourne Airport as well. We will pursue both of those, do that work, it’s well and truly underway and we will report progress as that happens but I think we do have to have a proper conversation at a National Cabinet level.”

The new facility would contain single-storey structures, separate ventilation systems for each room, including windows, surfaces that are easy to clean, and separate staff facilities.

“We are actively pursuing and examining the construction of a purpose-built quarantine centre, a centre that would serve to replace … maybe not entirely but in significant part, the work of inner-city hotels,” Mr Andrews told reporters.

“This will be based in large part on the [Northern Territory] Howard Springs model. People would be in the same location but not sharing the same spaces, so they’re not under the same roofline.

“That work is ongoing and a delegation of senior officials will travel to the Northern Territory as soon as is practicable to see first hand how the Howard Springs facility is set up.” 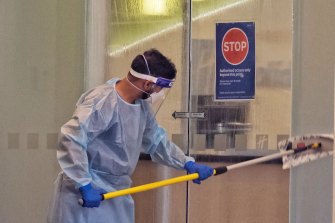 Hotel guest were removed from the Holiday Inn in Melbourne on Tuesday.Credit:Luis Enrique Ascui

The Premier said there was more land to build a purpose-built quarantine facility at Avalon Airport than Melbourne Airport, but he stressed it was too early to determine which site would be more feasible.

Mr Andrews said he will be requesting assistance from the federal government and private sector, but could not provide a timeline on when the proposed facility would be built.

“We’ll have some conversations with the Commonwealth and the private sector about how this can be a partnership and a joint venture,” he said.

“But it’s too early for us to say here is a plot of land. There is obviously space there (at Melbourne Airport), but there’s not as much space as there is at Avalon. The Federal Government and the NT Government are currently in partnership to boost quite significantly the Howard Springs set-up so it absolutely can be done again.”