A new Star Wars spin-off novel published by Disney has whipped fans into a frenzy as they believe it suggests that Obi-Wan Kenobi is bisexual.

Written for teens and young adults, the spin-off new book ‘Star Wars Padawan’ by Kiersten White explores the Jedi’s younger years and readers were quick to speculate his sexuality.

The much-loved character was played by Sir Alec Guinness in the original films and Ewan McGregor in the prequel trilogy and the Disney+ miniseries.

And now he features in Padawan, where he attempts to prove himself to Jedi master Qui-Gon Jinn, who is played by Liam Neeson on screen. 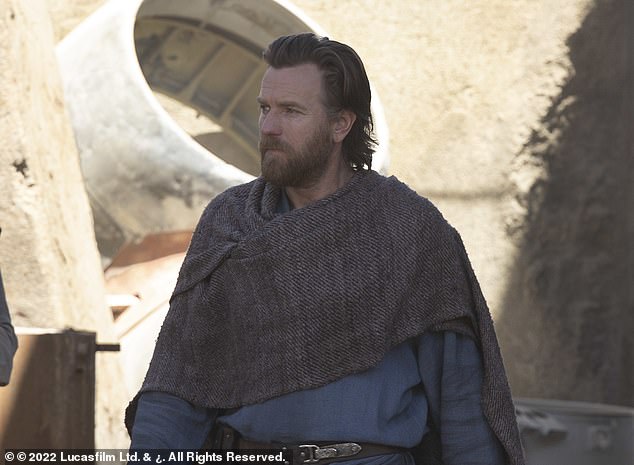 Obi-Wan Kenobi, played here by Ewan McGregor, is a character in the new spin-off novel Star Wars Padawan, in which some fans believe his sexuality is questioned 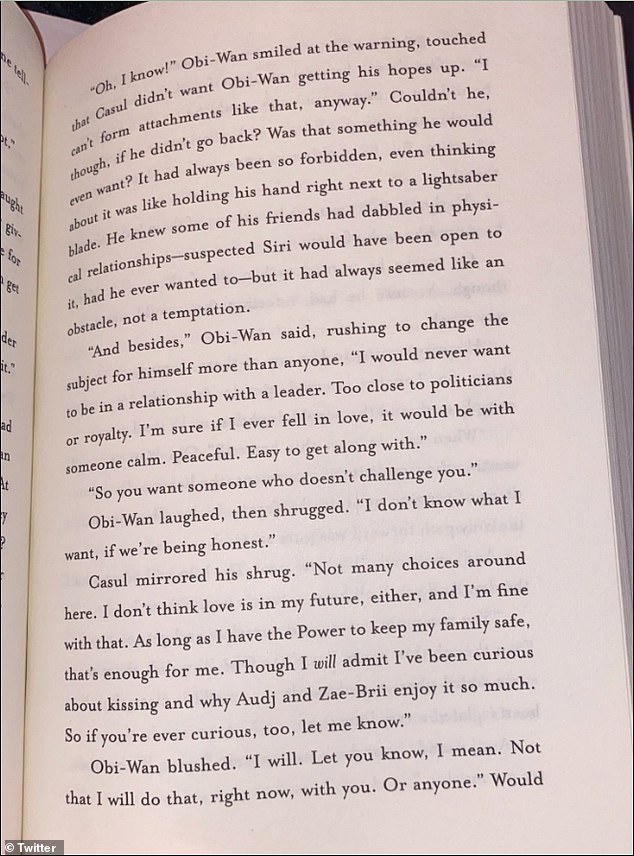 Excerpts from the new spin-off have set fans into a frenzy, as they believe that the novel shows Obi-Wan Kenobi is bisexual or asexual 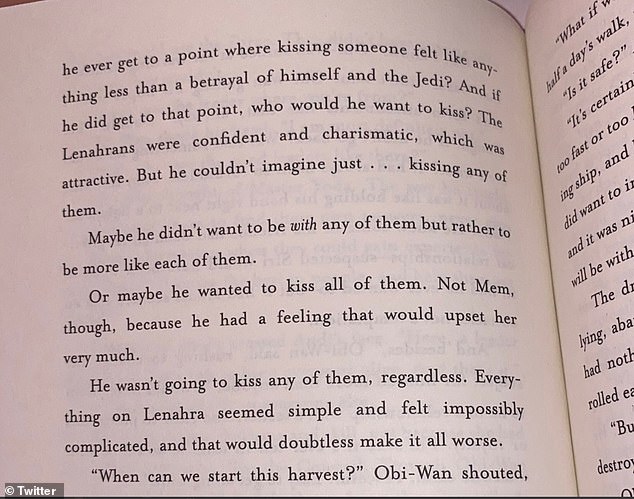 According to Disney Books’ description of the novel, it includes: ‘Romantic complications, startling revelations, and a looming threat to both the planet and his new friends will bring Obi-Wan face-to-face with his worst fear: that maybe he was never supposed to be a Jedi at all.’

In one ambiguous scene in the book – published by Disney-Lucasfilm Press – Obi-Wan speaks to another teen Casul about the idea of kissing another boy, while also showing signs of his pious Jedi beliefs.

Casul says: ‘Not many choices around here. I don’t think love is in my future, either, and I’m fine with that. As long as I have the Power to keep my family safe, that’s enough for me.

‘Though I will admit I’ve been curious about kissing and why Audj and Zae-Brii enjoy it so much. So if you’re ever curious, too, let me know.’

The novel, published last week, then continues: ‘Obi-Wan blushed. ‘I will. Let you know, I mean. Not that I will do that, right now, with you. Or anyone.’

‘Would he ever get to a point where kissing someone felt like anything less than a betrayal of himself and the Jedi? And if he did get to that point, who would he want to kiss? The Lenahrans were confident and charismatic, which was attractive.

‘But he couldn’t imagine just … kissing any of them. Maybe he didn’t want to be with any of them but rather to be more like each of them. Or maybe he wanted to kiss all of them.’

Young fans have taken to social media in a frenzy – believing that this means Obi-Wan would be open to kissing a man and therefore, understanding that he is a bisexual character. 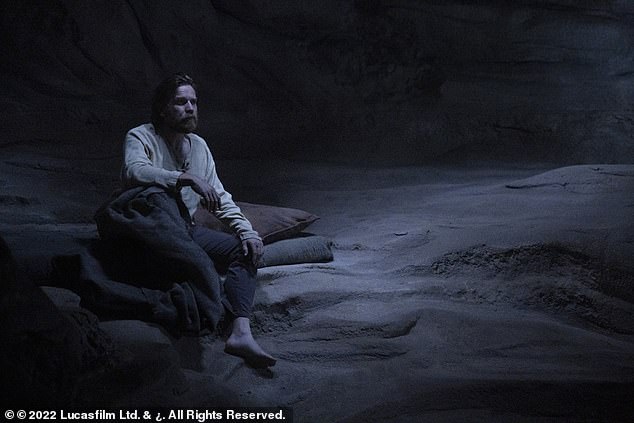 McGregor playing Obi-Wan in the Disney+ series, which aired earlier this year 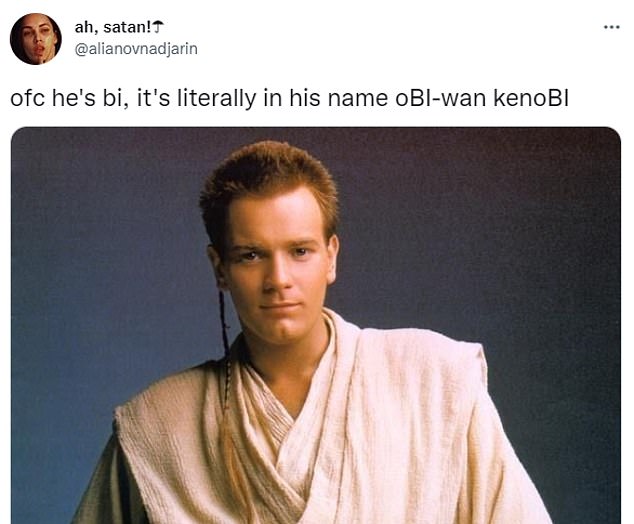 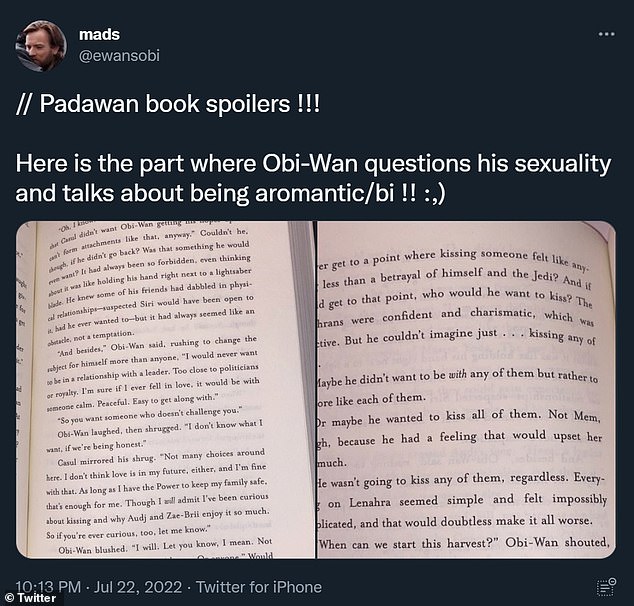 Others believed that this may mean the character is asexual as he quipped that he may not want to kiss ‘anyone.’

One fan wrote: ‘Obi-Wan Kenobi having bi in his name twice was not a coincidence I can confirm.’

Another added: ‘In a cute, relatable scene in which Obi tries to figure out his attraction, any gender goes but he’s not sure if romance is for him at all. No clear label but definitely on the bi or asexual/aromantic spectrum.’

A third, measured, fan wrote: ‘One side of me thinks his sexuality shouldn’t be something explored due to his Jedi Code and it somewhat cheapens how special Satine was to him.

‘The other thinks it’s feasible for a Padawan who’s been told since day 1 not to love to be very curious about his own sexuality.’

Another said: ‘This is by no means a big deal, but is this really necessary? To change an established character’s sexuality?

‘Again not a big deal, I’m all for inclusion and all that, but they should probably make one of their new characters bi instead of an established character.’

White has not yet commented on the conclusions readers are drawing from her new novel.