Here is what you need to know about the US-backed Syria force reportedly in the making in the country’s northeast. 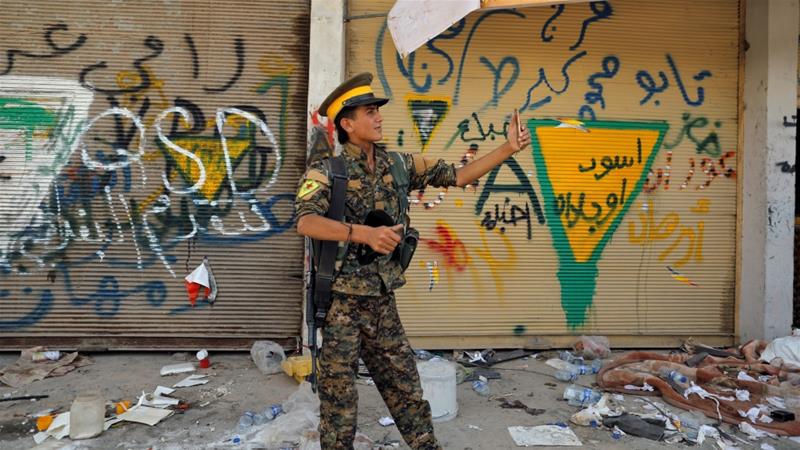 A US plan to form a new border security force in the northeast of Syria has drawn condemnation from major powers in the region, including Turkey and Russia.

Under the plan, the US-led coalition fighting against ISIL in the war-torn area would recruit 30,000 fighters into the new force, according to US officials.

Turkish President Recep Tayyip Erdogan said the US was working to form a “terror army” on his country’s southern border by training and supplying the force that would include Kurdish fighters.

Purpose of the force

“Currently, there are approximately 230 individuals training in the BSF’s inaugural class, with the goal of a final force size of approximately 30,000,” he said.

Dillon said efforts were taken to ensure individuals served in areas close to their homes.

“Therefore, the ethnic composition of the force will be relative to the areas in which they serve.

Around half of the new force will reportedly be recruited from the SDF, an umbrella group of fighters dominated by the Kurdish People’s Protection Units (YPG) in control of the northeast of Syria.

The US views the YPG as a highly effective fighting force against the Islamic State of Iraq and the Levant (ISIL, also known as ISIS) and President Donald Trump decided to arm YPG fighters earlier this year.

The US arms shipments began before the launch of a months-long offensive to remove ISIL from the Syrian city of Raqqa, its self-declared capital. The YPG played a prominent role in the eventual defeat of the group later in 2017.

The YPG is considered a “terrorist group” by Turkey over its ties to the banned Kurdistan Workers’ Party (PKK), which has waged a decades-long fight inside the country.

The PKK is also blacklisted as a “terrorist organisation” by Turkey and its Western allies. More than 40,000 people in Turkey have been killed since the 1980s after the PKK launched its rebellion.

The PKK’s initial aim was achieving an independent Kurdish state, but later changed it to a demand for equal rights and Kurdish autonomy in Turkey.

Ankara is furious over US plans to form the new force with Kurdish fighters and has responded by reinforcing the border with Syria with more of its troops.

A military operation in northern Syria against the city of Afrin – controlled by the Syrian Kurdish armed group YPG – will be launched “in the days ahead”, Erdogan said on the issue, accusing the US of forming a “terror army”.

He claimed that the Trump administration “did not want to keep Syria as a state in its current borders”.

“What it would mean is that vast swaths of territory along the border of Turkey and Iraq would be isolated, it’s to the east of the Euphrates River. There are difficult relations between Kurds and Arabs there,” Lavrov said.

“There is a fear that they are pursuing a policy to cut Syria into several pieces,” he added.

The Syrian government denounced the new border force in northern Syria as a “blatant assault” on its sovereignty.

“Syria strongly condemns the US announcement on the creation of militias in the country’s northeast, which represents a blatant attack on the sovereignty and territorial integrity and unity of Syria, and a flagrant violation of international law,” a government source, cited by state news agency SANA, said.

“Syria considers any Syrian who participates in these militias sponsored by the Americans as a traitor to their people and nation, and will deal with them on this basis,” the official was cited as saying.