A billionaire who quit his job over links to paedophile Jeffrey Epstein has bought a Grade II listed apartment in London for £21million.

New York financier Leon Black, 70, quit his investment group Apollo Global Management in January this year following intense scrutiny after he was found to have paid the convicted sex offender $158million in fees for ‘professional services’.

His company, Apollo Global Management, said no evidence was found of any wrongdoings in Black’s past relationship with Epstein, including allegations of any knowledge that Epstein was running an international sex trafficking ring. 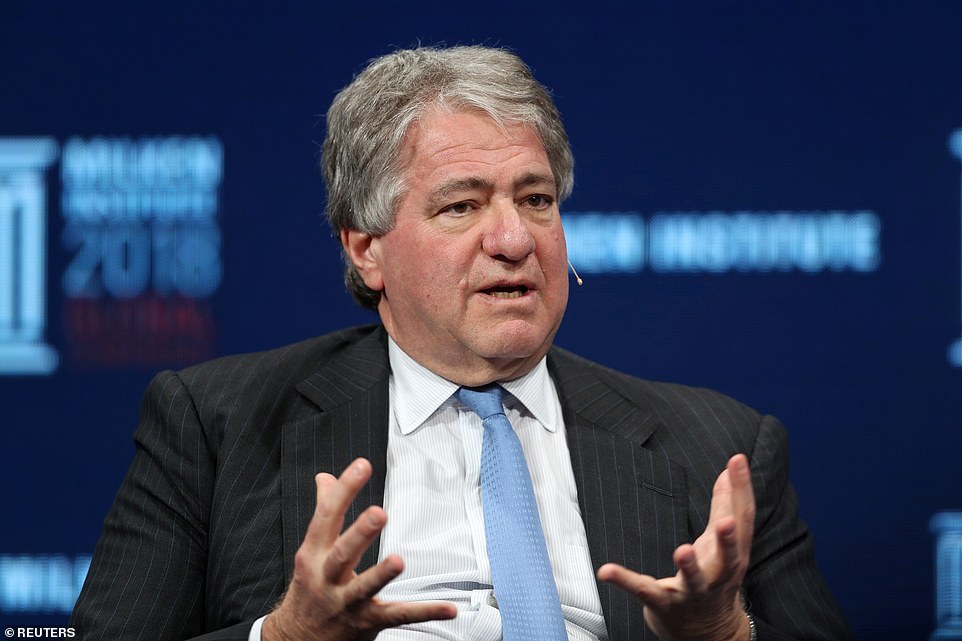 Soon after stepping down as CEO at Apollo, he left his position as chair at New York’s Museum of Modern Art.

He has agreed to buy the home in London’s lavish Belgravia neighbourhood for £21million, £2million below the asking price.

The house once belonged to three-time Prime Minister Stanley Baldwin and wife Lucy from 1913 to 1937, where the couple entertained politicians Winston Churchill and Neville Chamberlain.

Chamberlain lived just across the square from them, at number 37.

They also had Royal Guests including the Price of Wales who became King Edward VIII – and it is rumoured that they weren’t a fan of one another. 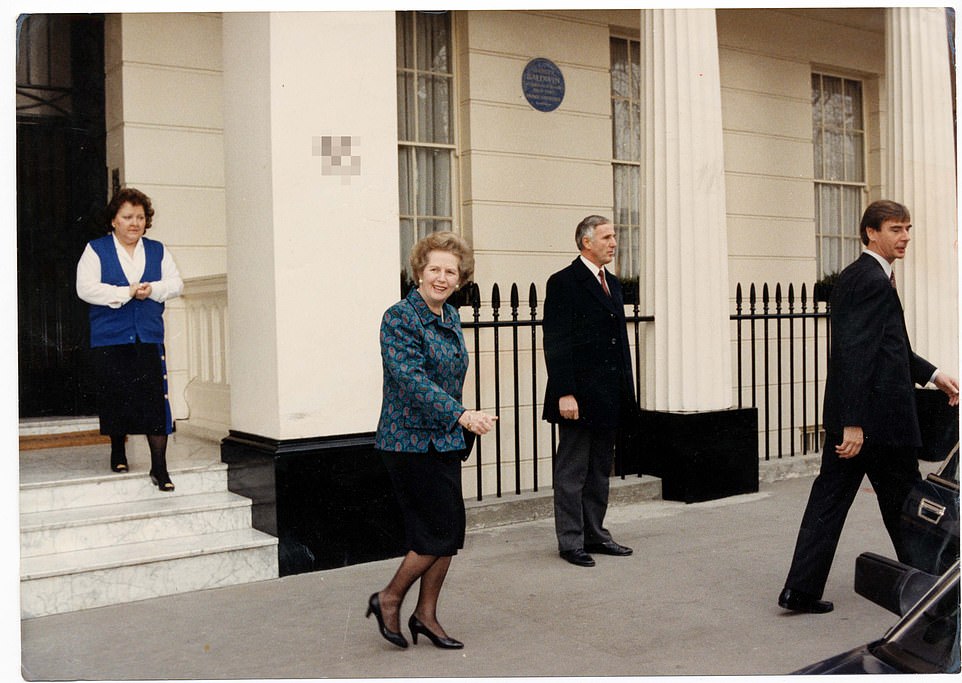 When Margaret Thatcher left her post as Prime Minister in 1990, owner of Eaton Square, Kathleen DuRoss Ford let her and her husband Denis live in the property until they bought their nearby home in Chester Square in 1991. Pictured leaving the Belgravia property in 1991 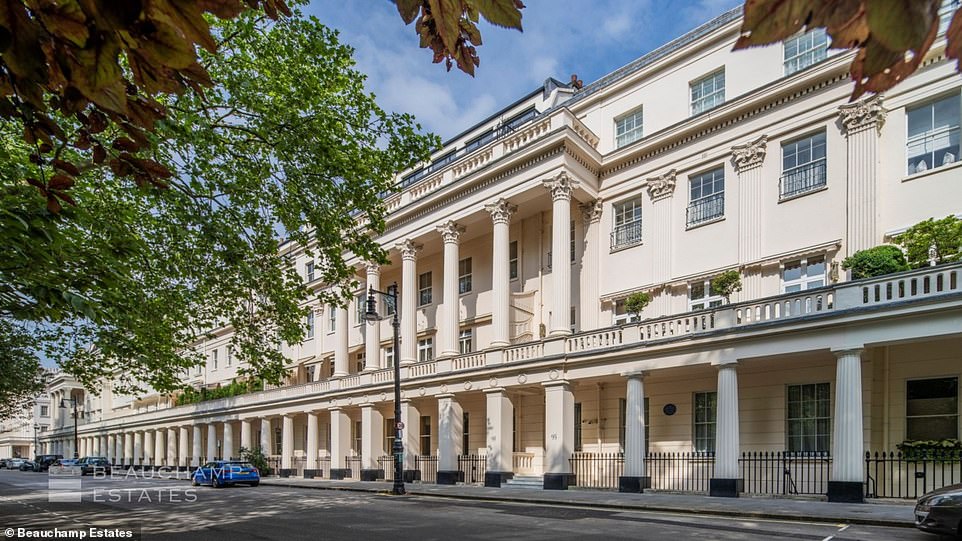 The home, in London’s Belgravia, was later owned by former head of carmaker Ford and grandson of its founder, Henry Ford II, and his wife, Kathleen DuRoss Ford

The home was later owned by former head of carmaker Ford and grandson of its founder, Henry Ford II, and his wife, Kathleen DuRoss Ford.

When Mrs DuRoss Ford died in May 2020, the property was passed on to her lawyer and caregiver Frank Chopin. 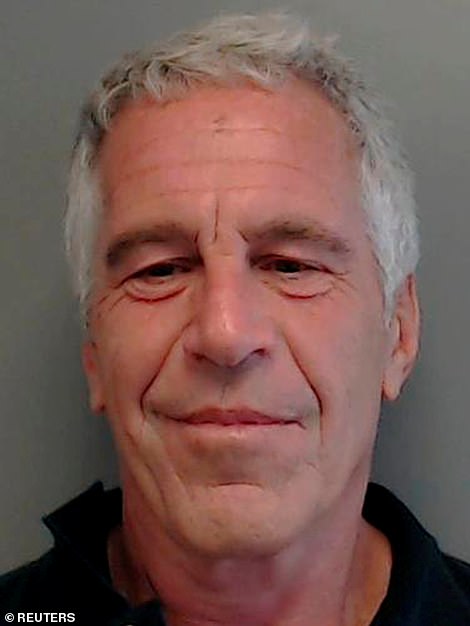 Leon Black, 70, quit his group Apollo after he was found to have paid convicted sex offender Jeffrey Epstein, pictured, $158million in fees for ‘professional services’

But in the year leading to her death, her children tried but failed to sue Chopin to gain back the control of their mother’s finances.

When Margaret Thatcher left her post as Prime Minister in 1990, Mrs DuRoss Ford let her and her husband Denis live in the property until they bought their nearby home in Chester Square in 1991.

The deal to snap up the Eaton Square property was signed in the past few days, according to the Financial Times.

Dating back to 1827, the Grade II listed house was designed by master builder Thomas Cubitt, and to this day retains many of its Regency period features.

This includes a reception room with a 14-ft-high ceiling, three full-height sash windows overlooking the garden square and a Regency feature fireplace.

The Blue Plaque home is arranged over the two lower floors of the mansion, hosting four bedrooms, and a mews house with another two.

Combining the main residence and the mews house, there is a total of 7,489sq ft of living accommodation which includes an entrance hall, three reception rooms, a main family kitchen, mews kitchen and eight bathrooms.

In the principal bedroom suite, there is direct access to a spacious patio garden, a study, bathroom and walk-in wardrobe.

The mews house has its own entrance on Eaton Mews North with a lower ground floor wine cellar, integral garage, kitchen, ground and first floor reception rooms, with both bedrooms featuring their own en-suite bathrooms.

Beauchamp Estates, who are listing the property, note that planning could be sought to extend the mews house by 600 sq ft.

This would expand the existing cellar to create a lower ground floor, linking to the lower floor of the main residence.

Other properties in the area have been extended to do the same, and Beauchamp estimate an extension and refurbished version of this home could make it worth up to £30million. 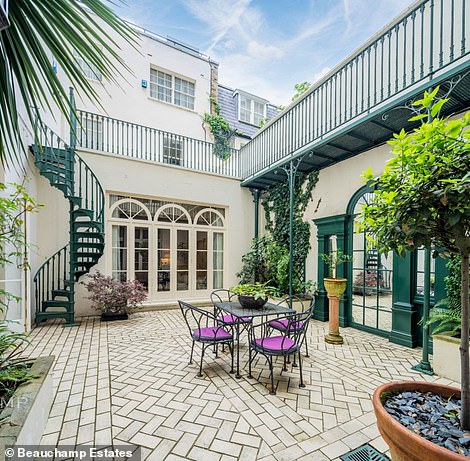 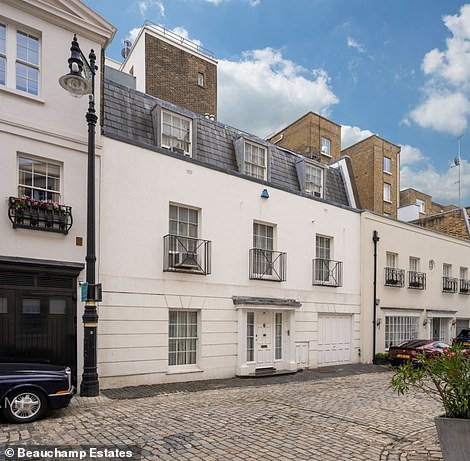