Nicola Sturgeon has blasted Boris Johnson’s texts with Sir James Dyson as having ‘a powerful stench of sleaze’.

The First Minister, who has been wrapped up in her own scandal over the Alex Salmond inquiry in the last year, condemned the Tories for ‘behind-the-scenes deals’.

But she conceded the beginning of the pandemic last March was a desperate time to keep people safe.

Her withering comments came after Boris Johnson made ‘absolutely no apology at all’ for text message exchanges with Sir James.

The vacuum cleaner tycoon had asked about the tax status of his employees if they working in Britain to help with the pandemic.

The PM personally promised the businessman he would ‘fix’ the issue after he was directly lobbied by the entrepreneur. 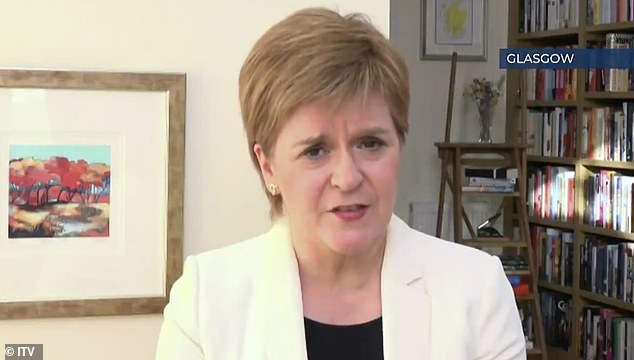 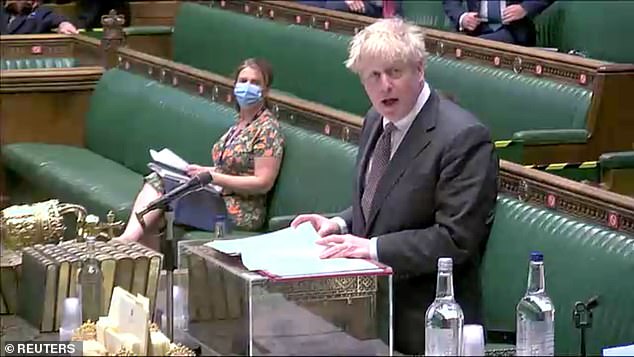 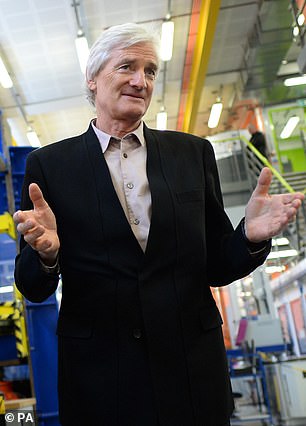 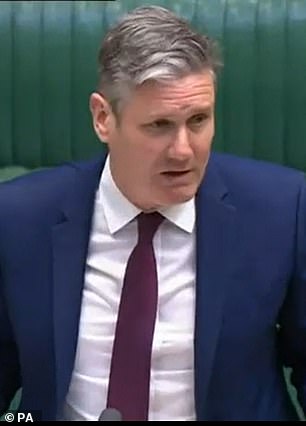 Boris Johnson (right) promised Sir James Dyson (left) that tycoon’s staff would not have to pay additional tax if they came to the UK to make ventilators for the NHS, reports claim

Ms Sturgeon was asked about the messages when she appeared on ITV’s Peston on Wednesday night.

She said: ‘Well I think there are two things. Firstly, it was a desperate time and we were all trying to do all of the right things to keep people safe.

‘So I do think we should think about that very carefully. And then there’s just the almost sort of behind the scenes you know deals being done.’

She added: ‘Look, there is I think a quite powerful stench of sleaze starting to surround this Tory government, and I think they really need to open it up to some fresh air.

‘My colleague Ian Blackford has rightly called for a full inquiry into all of this today and it’s a call that I fully back.’ 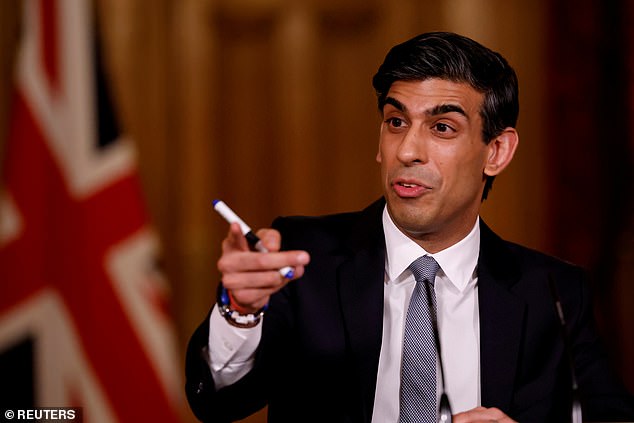 Two weeks after the text exchange, Chancellor Rishi Sunak told MPs that those coming into the UK to offer help during the pandemic would not see a change in their tax status

Mr Johnson said during Prime Minister’s Questions earlier he made ‘absolutely no apology at all’ for the messages between him and Sir James.

The businessman had raised concerns about the tax status of his employees if they worked in Britain during the pandemic.

The PM told Sir James he would ‘fix’ the issue after he was directly lobbied by the entrepreneur, who was seeking to build ventilators at the height of the Covid crisis.

Mr Johnson said he was ‘happy to share all the details’ of the exchanges as there was ‘nothing to conceal’.

Labour leader Sir Keir Starmer suggested it was ‘one rule for those that have got the Prime Minister’s phone number, another for everybody else’.

Dyson: ‘We are ready. But nobody seems to want us to proceed. Sadly, James’

Johnson: ‘I will fix it tomo! We need you. It looks fantastic’

Johnson: ‘Rishi says it is fixed!! We need you here’

Dyson: ‘Thanks! I will give the ventilator our all. James’

Dyson: ‘Dear Boris, I’m afraid that we need a response to our letter below from Rishi please? We really need Rishi to answer the letter we sent (attached) – now. Or to make the position clear. Rishi has fixed the Country Day Count issue but not Work Days. The former is now covered under an ‘Exceptional Circumstances’ umbrella, Work Days are not. So, he has freed up your ability to be in the UK but not to work there – even in support of this National emergency.’

Johnson: ‘James I am first lord of the treasury and you can take it that we are backing you to do what you need.’

Just two weeks later, Chancellor Rishi Sunak told MPs that those coming into the UK to offer help during the pandemic would not see a change in their tax status.

The BBC said it has seen messages between Mr Johnson and Sir James after the businessman was unable to get the assurances he was seeking from the Treasury.

The exchanges took place last March, when the Government was appealing to firms to supply ventilators amid fears the NHS could run out.

Sir James, whose firm is now based in Singapore, wrote to the Treasury asking for an assurance his staff would not have to pay additional tax if they came to the UK.

But when he failed to receive a reply, the BBC said he took up the matter directly with the Prime Minister.

He said in a text the firm was ready but ‘sadly’ it seemed no-one wanted them to proceed. Mr Johnson replied: ‘I will fix it tomo! We need you. It looks fantastic.’

The Prime Minister texted him again saying: ‘[Chancellor] Rishi [Sunak] says it is fixed!! We need you here.’

When Sir James sought a further assurance, the PM replied: ‘James, I am First Lord of the Treasury and you can take it that we are backing you to do what you need.’

Two weeks later, Mr Sunak told the Commons Treasury Committee the tax status of people who came to the UK to provide specific help during the pandemic would not be affected.

Labour has claimed there is ‘evidence’ Mr Johnson may have breached the ministerial code with the texts.

A spokesman for Sir Keir told reporters: ‘There is evidence that the code may very well have been breached and we will be following that up in the coming days.’

But Downing Street insisted Mr Johnson informed his officials of the exchanges in a ‘timely manner’ in line with the provisions of the code.

‘He alerted officials after his contact with Dyson and then that passed on to officials to work up the advice.’

Challenged about the issue at PMQs, Mr Johnson said: ‘I make absolutely no apology at all for shifting heaven and earth and doing everything I possibly could, as I think any prime minister would in those circumstances, to secure ventilators for the people of this country.’

The PM said: ‘There’s absolutely nothing to conceal about this and I am happy to share all the details with the House, as indeed I have shared them with my officials immediately.’

Sir Keir compared the way Mr Johnson responded to Sir James’ concerns with the Government’s treatment of steelworkers, nurses and three million self-employed people who have been left out of coronavirus support schemes.

Workers at Liberty Steel face uncertainty following the collapse of financial backer Greensill Capital – a firm former PM David Cameron lobbied ministers on behalf of – but ‘the Prime Minister hasn’t fixed that – in fact, he has done nothing to help steelworkers’.

Nurses ‘didn’t get a text from the Prime Minister, they got a kick in the teeth’ with a below-inflation NHS pay rise.

On the self-employed, there was ‘an open door for those with the Prime Minister’s number, a closed-door to the three million’.

Sir Keir said: ‘What this shows once again is the extent of the sleaze and the cronyism that is at the heart of his Conservative government.’

Mr Johnson insisted the Government ‘is doing the right thing at the right time’ and ‘we take the tough decisions to procure thousands – tens of thousands – of ventilators in record time, which apparently he (Sir Keir) now opposes’.

Sir James said he was ‘hugely proud’ of his firm’s response in ‘the midst of a national emergency’, and that he would ‘do the same again if asked’.

He told the BBC: ‘When the Prime Minister rang me to ask Dyson to urgently build ventilators, of course, I said yes.

‘Our ventilator cost Dyson £20 million, freely given to the national cause, and it is absurd to suggest that the urgent correspondence was anything other than seeking compliance with rules, as 450 Dyson people – in UK and Singapore – worked around the clock, seven days a week to build potentially life-saving equipment at a time of dire need.

‘Mercifully, they were not required as medical understanding of the virus evolved. Neither Weybourne (Dyson’s holding company) nor Dyson received any benefit from the project; indeed commercial projects were delayed, and Dyson voluntarily covered the £20 million of development costs.’

Sir James also said his company had not claimed ‘one penny’ from governments in any jurisdiction in relation to Covid.

But on Wednesday night Labour demanded the Liaison Committee of MPs holds an urgent probe into the PM’s conduct.

Ms Reeves called for an investigation to be launched by Sir Bernard Jenkin, chair of the Commons Liaison Committee comprised of select committee chairs.

The shadow chancellor of the Duchy of Lancaster said the Prime Minister must give evidence before the cross-party group of MPs.

She called for all correspondence from Mr Johnson’s phone about Government business to be released and for No 10 to release details of communications between ministers, officials and lobbyists.

In a statement, Ms Reeves added: ‘Revelations today seem to confirm a growing feeling that if one has access to a telephone number of someone like the Prime Minister or the Chancellor of the Exchequer, then they are able to gain special treatment, potentially even significant financial ones.

‘We need the Prime Minister to appear before the Liaison Committee immediately and for a thorough investigation into his conduct on this matter.’