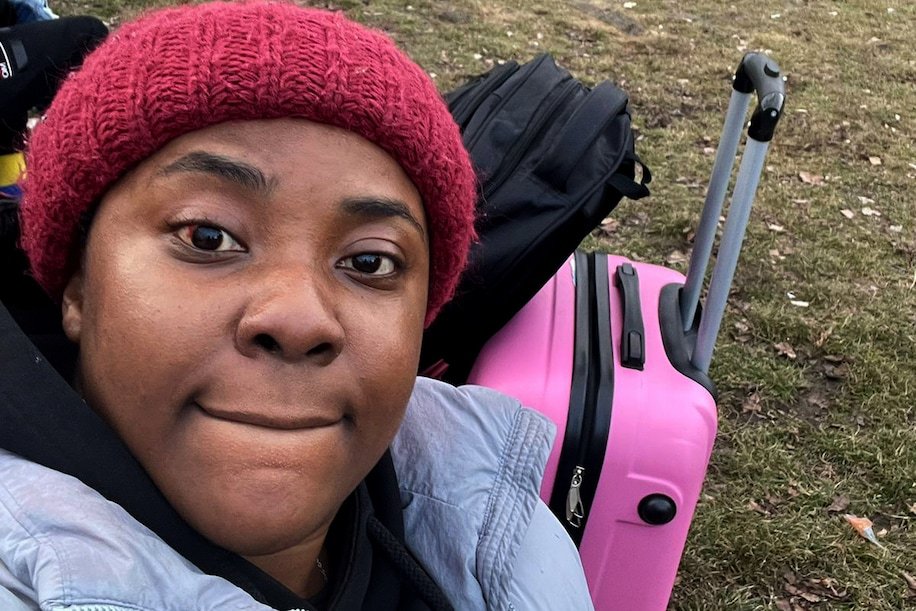 A Nigerian medical student who recently fled the war in Ukraine said she and other Africans were turned away by bus station workers when trying to reach the Polish border.

Jessica Orakpo, 23, accused Ukrainian bus staff of only permitting white people to board shuttles and said a group of more than 20 Africans were left stranded at the station, People reported.

Many other ethnic minorities have shared similar stories of racism over the past few weeks, as they tried to escape Ukraine.

So far, a total of 2.5million have fled Ukraine since Vladimir Putin’s invasion began on February 24 – in Europe’s largest exodus since WWII.

Jessica, a student at Ternopil National Medical University, has lived in Ukraine since 2016.

She was set to graduate in June with a general medicine degree and she hoped to take up residency in the US and specialise in rheumatology.

The 23-year-old started her journey on February 26 with just one small piece of luggage, a backpack and a few essentials such as water, juice, sweets and a blanket.

Along with a friend, Nataizya Nanyangwe of Zambia, she headed west in a taxi towards the border crossing at Medyka, Poland.

Their pair were forced to walk a considerable part of the journey after the driver, who was stuck in traffic, said he could go no further.

More than 10 hours later, Jessica said: ‘I was super tired and I just needed somewhere to sleep because I was even considering sleeping by the roadside.

‘We were literally limping.’

A traffic warden offered them a ride to a shelter where they stayed for night and told them there were buses available to take them straight to Poland.

After waking up early the next morning and arriving at a bus station in Mostyska, Ukraine, near the western border, to catch a bus taking evacuees to Medyka, Poland, the pair were stopped from getting on as station workers prioritised white Ukrainians, Jessica said.

‘He wouldn’t even look at you if you were black,’ she said. ‘They were judging based on skin colour.’

Russia-Ukraine war: Everything you need to know

Since Russia’s invasion of Ukraine began on February 24, the country has suffered widespread damages and loss of life amid a major bombing campaign.

Countries have retaliated by imposing sanctions on Russia and oligarchs such as Roman Abramovich, while large companies like Disney, Starbucks, McDonald’s, and Coca-Cola have suspended business in the country.

However, despite these economic blows, Russian President Vladimir Putin hasn’t shown any signs of calling off the attack anytime soon, with a convoy moving closer to the capital Kyiv.

Jessica says a group of more than 20 Africans were left stranded at the station, despite her pleading in Ukrainian to be allowed onto the bus.

At one point, she said another worker indicated she would have a spot on another bus by writing a number on her hand, but when it came time to get on they told her: ‘Just Ukrainians, no international person’.

She said: ‘It was so dehumanising. It was like we lost hope. People broke down crying. Some other Africans were shouting “Why, why just white people? Why not us as well?”‘

Despite this, Jessica managed to escape Ukraine by returning to Ternopil, before trying a second evacuation through Hungary.

A friend had booked a private bus for about 10 of them.