No10 staff were told to leave ‘lockdown breaching’ Christmas Quiz via the back door and team names included ‘Professor Quiz Whitty’, it is revealed

No10 staff who stayed in Downing Street to take part in an alleged ‘lockdown-busting’ Christmas quiz last year were told to ‘go out the back’, it has been claimed.

Downing Street is accused of holding four parties that broke Covid restrictions last year, including a quiz attended by dozens of staff and which the Prime Minister helped to host on December 15 – three days before another Christmas party which is being investigated.

No10 previously insisted that Downing Street were ‘often required to be in the office to work on the pandemic response’ during the various lockdowns, and therefore ‘those who were in the office for work may have attended virtually from their desks’.

But the Mirror said a message sent by No10’s head of HR on the night of the quiz advised that those who had stayed behind to take part ‘go out the back’ when they left.

The paper also unearthed the team names used that night, including ‘Professor Quiz Whitty’, ‘Rebels without a Claus’, and ‘Hands, Face, First Place’.

The quiz night is one of at least six parties across Whitehall from November to December last year when the Government was ordering the public to stay at home and protect the NHS. Tier 2 restrictions in London on December 15 said there could be no mixing of households indoors, apart from support bubbles, and a maximum of six people outside.

A Government spokesman told the paper: ‘Given there is an ongoing review, it would be inappropriate to comment while that is ongoing.’

Pictures obtained by the Sunday Mirror show Boris Johnson on a TV screen flanked by colleagues, one draped in tinsel and another wearing a Santa hat, in the No10 library. A source claimed many staff were huddled by computers in their Downing Street offices, conferring on questions and drinking alcohol while the quiz was taking place.

It comes as the former Conservative mayoral hopeful Shaun Bailey quit as chairman of the London Assembly’s Police and Crime Committee earlier today – shortly before The Mirror published a photo of him and other Tory aides at a party in Conservative HQ.

The image showed 24 people with drinks, and buffet food laid out. The Tories previously admitted the party had taken place on December 14, when London was in Tier 2 restrictions, and said that staff had been disciplined. 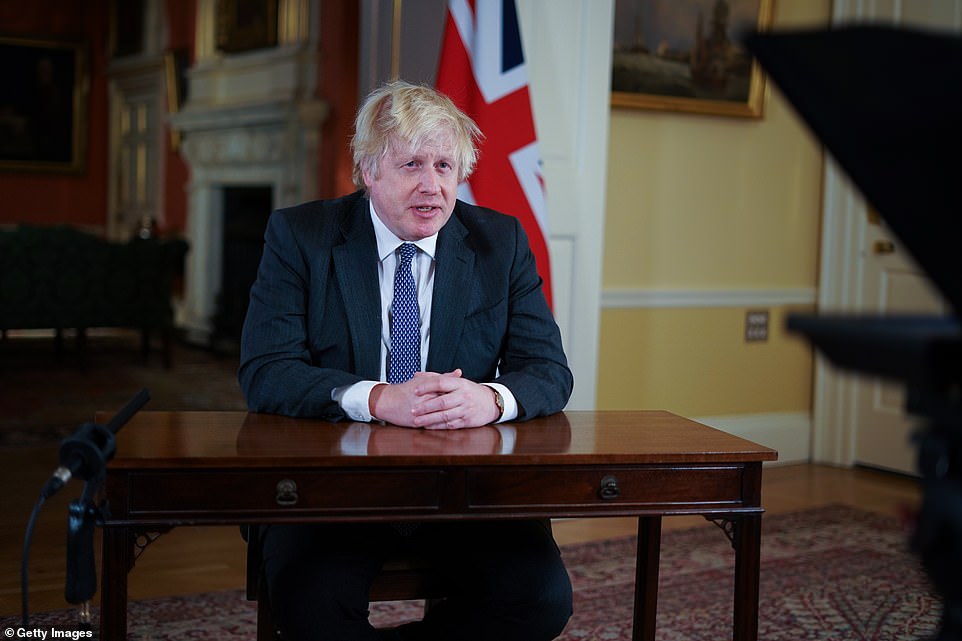 Downing Street is accused of holding four parties that broke Covid restrictions last year, including a quiz attended by dozens of staff and which the Prime Minister helped to host on December 15 – three days before another Christmas party which is being investigated 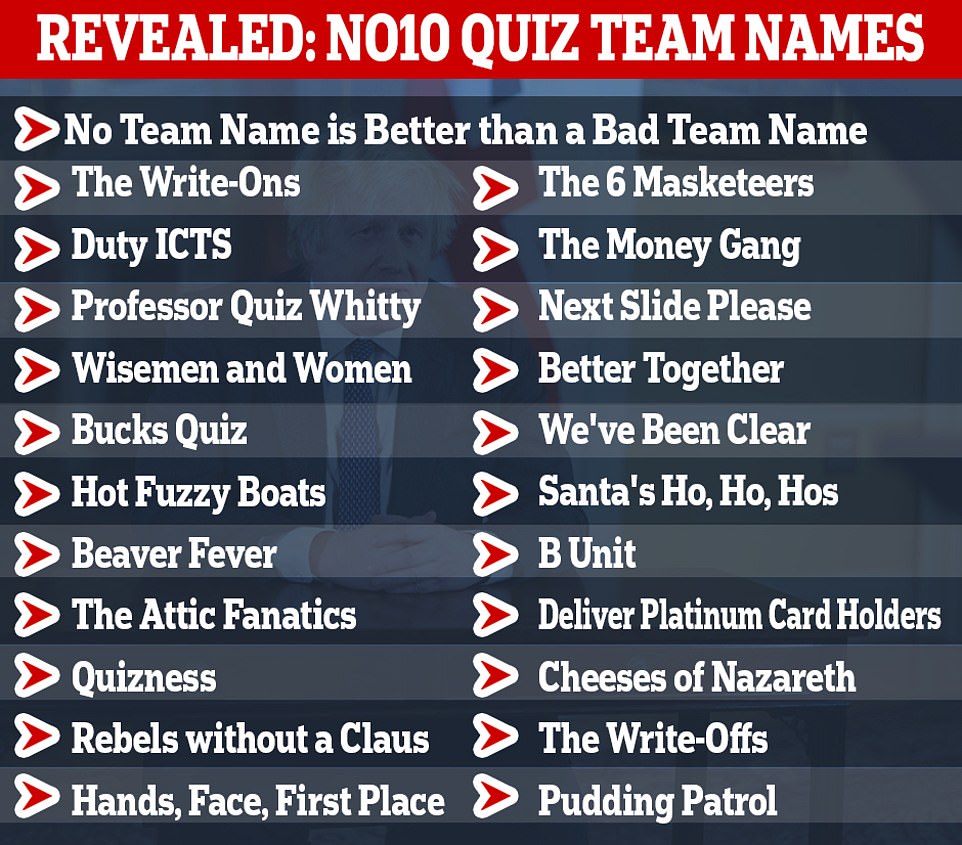 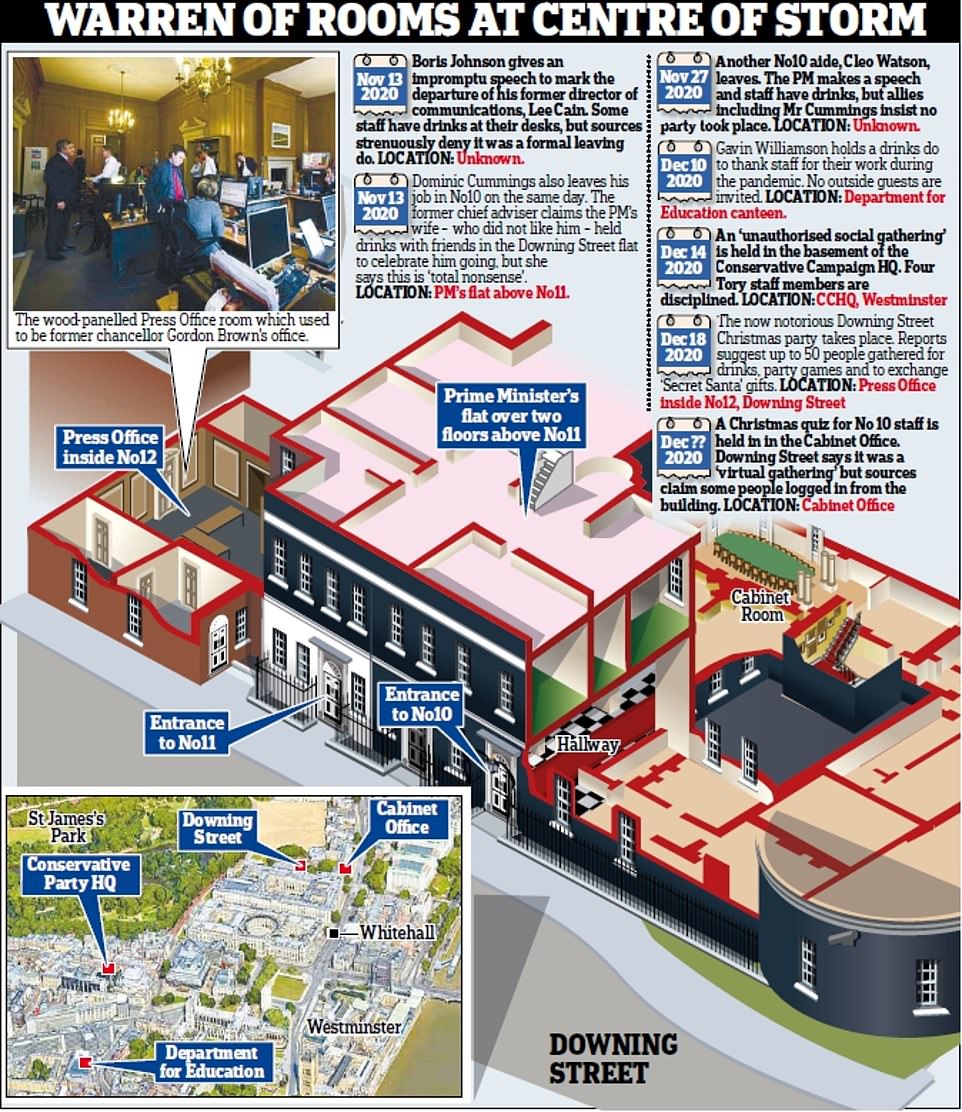 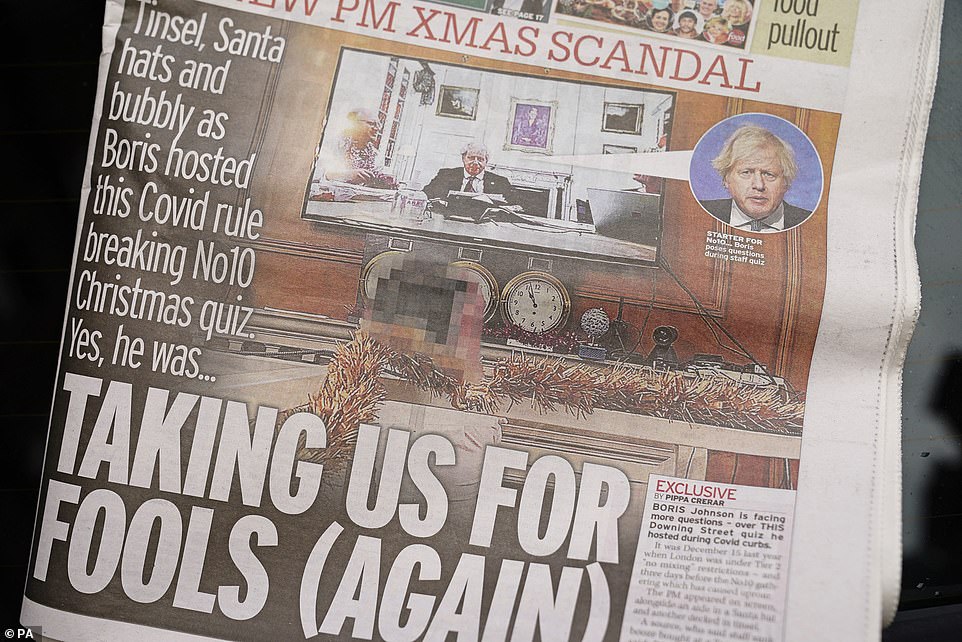 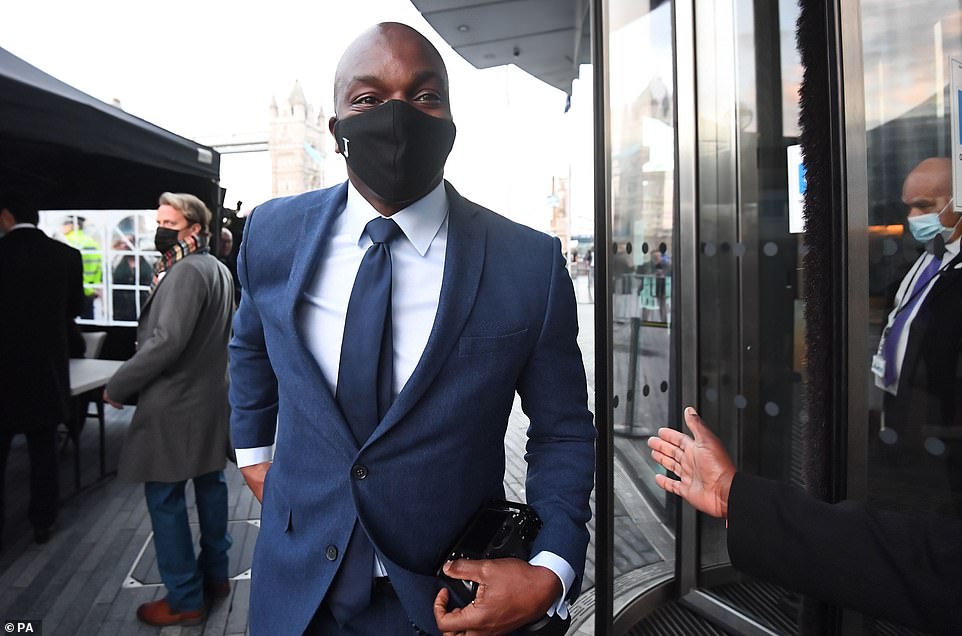 Dom’s Gone bash – November 13: Dominic Cummings alleges that the PM held a gathering at his grace-and-favour flat on November 13 last year, the day the adviser was ousted from Downing Street. Mr Cummings also suggested there had been ‘other flat parties’.

Leaving do – November 27: The Prime Minister reportedly gave a speech at a packed Number 10 leaving do for a ‘senior aide’. Sources claimed that ’40 or 50 people’ were present.

Christmas party – December 18: Staff in Downing Street are believed to have held a Christmas party, with reports that dozens of people attended the event, some wearing festive jumpers and exchanging Secret Santa presents. London had been placed into Tier 3 restrictions on December 16 – the highest level of curbs on freedoms at the time which banned people from different households mixing indoors. Downing Street has said Boris Johnson did not attend the event.

Quiz night – December: Sources told the BBC that a separate Christmas quiz event was held for Number 10 staff at some point in December. Everyone was apparently invited to attend and to form teams. One source said some people attended virtually via Zoom but others did attend in person and sat in groups of six. Downing Street has insisted the quiz was ‘virtual’.

… AND ELSEWHERE IN WHITEHALL

December 10: Then-education secretary Gavin Williamson hosted a Department for Education party for ‘up to 24 people’ on December 10. The gathering, which included food and drink, took place in the department’s canteen. The department has admitted the event happened.

December 14: About 25 people gathered in the basement of the Conservative party’s Matthew Parker St offices in Westminster. The Times reported that advisers at Conservative campaign headquarters held an event with Shaun Bailey, the party’s unsuccessful candidate for mayor of London this May.

And the GLA Conservatives confirmed that Mr Bailey had stepped back from the role. In a statement, they said: ‘Shaun Bailey AM has today stood aside as chairman of the London Assembly’s Police and Crime Committee.

‘He does not want an unauthorised social gathering involving some former members of the London mayoral campaign team last December to distract from the committee’s important work holding the Mayor of London to account.

‘He will continue to speak up for Londoners who no longer feel safe in our city and push for a strategy to tackle the disproportionate level of crime in London’s black community.’

Cabinet Secretary Simon Case has been tasked with investigating alleged gatherings or parties held in Government buildings during restrictions. It has been suggested he could come back with his findings as early as this week.

According to the Daily Mirror’s Political Editor Pippa Crerar – who also broke the story about the December 18 Christmas Party – one source said around 70 staff stayed in No10 after work to play the quiz, that was initially supposed to be virtual.

Official guidance at the time said: ‘You must not have a work Christmas lunch or party, where that is a primarily social activity and is not otherwise permitted by the rules in your tier.’

On December 15, 459 people died from coronavirus, while another 33,828 were infected, according to official data.

The latest revelations further call into question Downing Street’s assertion that no Christmas parties had taken place in No10 last year.

The Mirror reports that staff were invited to the virtual quiz, that was put on to raise money for charity. The invites were sent a couple of weeks earlier, it said.

Citing their source, the newspaper said dozens signed up to take party online, but at 6.30pm that evening, many staff opted to stay in No10 instead.

Among the teams to take part were teams from the Prime Minister’s private office, the press office and the policy unit, it has been reported, with questions ranging from the history of Downing Street to Christmas song lyrics.

At the halfway point of the quiz, Mr Johnson surprised staff by appearing on screen to act as the quiz-master for one round that lasted 10 to 15 minutes, which the pictures obtained by the newspaper reportedly show.

‘It was just part of the culture. The PM turned a blind eye. He seemed totally comfortable with gatherings,’ the Mirror’s source said.

Mr Johnson has found himself facing criticism on a number of fronts in recent weeks from the funding of the refurbishment of his Downing Street flat to a claim he intervened to ensure pets were evacuated from Kabul during the chaotic Western withdrawal in August.

But by far the most damaging has been reports that a party was held at Downing Street during a 2020 Christmas lockdown when such festivities were banned, with a video emerging this week which showed staff laughing and joking about it.

The Prime Minister relented and allowed an apology of sorts when video emerged of aides joking about holding such a bash last year despite repeated official denials.

The Mirror was first to report last week that a festive bash took place in No10 on December 18 last year as London was under Tier 3 restrictions.

Those measures explicitly banned Christmas lunches or parties where they are ‘a primarily social activity’, as a Government Twitter account pointed out to the public a day earlier. 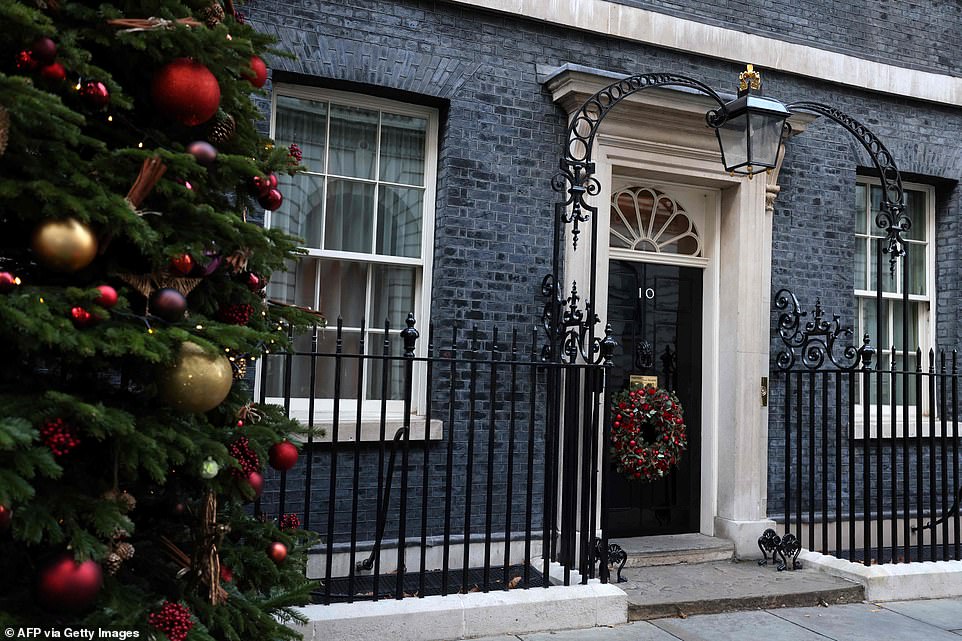 Cabinet Secretary Simon Case has been tasked with investigating alleged gatherings or parties held in Government buildings during restrictions. It has been suggested he could come back with his findings as early as this week 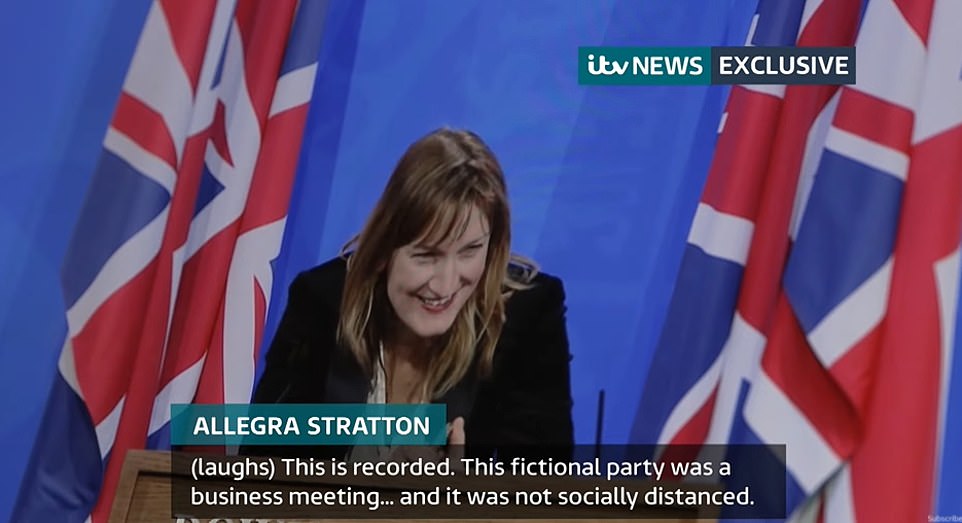 In the bombshell video a No 10 aide asks a question about ‘a Downing Street Christmas party on Friday night’, to which Allegra Stratton laughed and replied: ‘I went home’

Downing Street bluntly rejected the allegations, with official statements insisting ‘there was no Christmas party’ and no rules were broken.

Mr Johnson told reporters: ‘I am satisfied myself that the guidelines were followed at all times.’

Hours after the Prime Minister tried to quell allegations of wrongdoing, ITV News published damning footage that gave increased weight to reports of the party.

In the rehearsal for televised briefings that were ultimately axed, they discussed a supposedly ‘fictional’ Downing Street party on ‘Friday’, which would have been December 18.

After the video was made public, Mr Johnson warned there will be ‘disciplinary action’ for any members of staff who broke the rules, but the first departure over the affair was not over attendance at any party.

In a tearful statement outside her north London home, Ms Stratton apologised over her remarks that ‘seemed to make light of the rules’.

‘To all of you who lost loved ones, who endured intolerable loneliness and who struggled with your businesses, I am truly sorry and this afternoon I am offering my resignation to the Prime Minister,’ she added.