Northern Ireland has today officially expanded its coronavirus vaccine drive to people under the age of 50, becoming the first home nation to move onto the next phase of the roll-out.

The country’s NHS is now inviting everyone over 45 to book their appointment at a vaccination centre or one of 350 pharmacies deploying the jabs.

Confirming the latest expansion, Northern Irish Health Minister Robin Swann said: ‘I would encourage everyone who is eligible to get the jab as soon as possible.

The 49-year-old added: ‘I have something of an interest to declare with today’s announcement as I fall into the 45-49 age group. I am looking forward to getting my jab very shortly.’

It comes despite warnings Britain’s vaccine drive will slow down in April because of a shortfall of five million AstraZeneca jabs from India.

Britons were told the holdup meant the jab scheme would need to focus on meeting second dose windows next month and reaching unvaccinated over-50s.

It killed off the Government’s ambition of having all Britons over 40 invited for their first dose by Easter. But with Moderna’s Covid vaccine finally set to come on stream within weeks, the UK could still be in a position to move onto the next phase of the roll-out in April.

A Department of Health source told MailOnline the devolved nations had been given their doses according to a ‘set schedule’ and that it was up to their governments to decide who they give them to.

Northern Ireland also lags behind the other nations in the UK in terms of percentage of the population vaccinated, adding to confusion about why the nation been able to expand its programme first. 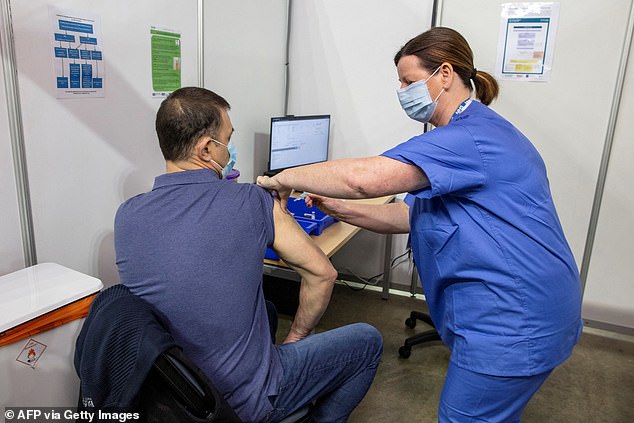 Northern Ireland has today officially expanded its coronavirus vaccine rollout to people under the age of 50, becoming the first home nation to do so. Pictured, a vaccine centre in Belfast 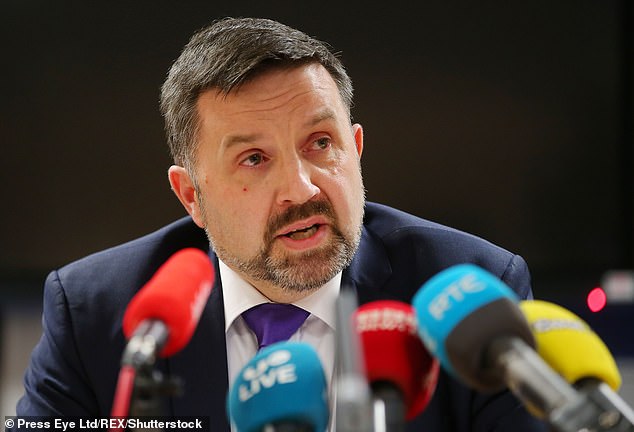 Confirming the latest expansion, Northern Irish Health Minister Robin Swann said: ‘I would encourage everyone who is eligible to get the jab as soon as possible’ 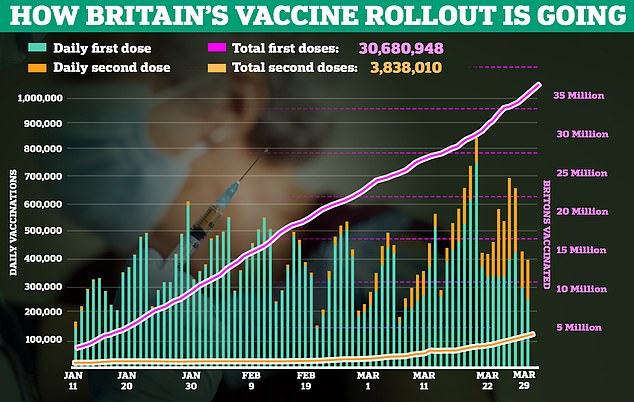 Who is being invited for a jab? Everyone over 45

As of yesterday, 740,729 people in Northern Ireland had received one dose of a Covid vaccine — about 39 per cent of its total population.

England is leading the way at 46 per cent, followed by 44 per cent in Scotland and 45 per cent in Wales.

Only people over 50 are officially being invited for their vaccines in the rest of the home nations — but some GP surgeries where uptake is high have chosen to invite younger age groups.

Meanwhile, data shows that Covid deaths among the over-70s across the UK have plunged by 97 per cent in ten weeks thanks to the vaccine rollout.

In the past week there has been an average of just 32 daily deaths in the over-70s.

At the peak of the crisis in mid-January, deaths among this age group had topped 1,000 a day in England.

Yet last Thursday – the most recent day with complete data – only seven people in their 70s and 15 over-80s died from Covid.

Yesterday another 56 deaths and 4,040 cases were recorded around the UK.

Nine in ten pensioners, and 54 per cent of the entire population, now have antibodies to fight off Covid.

Analysis of death rates show they have fallen most rapidly among groups which have been vaccinated.

Less than half of all deaths are now in the over-80s, compared to nearly two-thirds before the vaccine was rolled out.

Data covering the week up to March 19 shows that deaths fell by 44 per cent among those in their 50s.

This compares to a 28 per cent drop among those under-50, most of whom are still waiting for their jabs.

It comes as scientists warned today that Europe’s suspension of the AstraZeneca vaccine will erode public confidence in the jab and cause more coronavirus deaths in Britain.

Pfizer says testing trials have shown its Covid vaccine is 100 per cent effective in children aged 12 to 15 years old, paving the way for them to seek US emergency use authorization in weeks.

The company data from a Phase 3 trial of children between the ages of 12 and 15 showed the vaccine ‘demonstrated 100 per cent efficacy and robust antibody responses’.

Most Covid vaccines being rolled out worldwide are for adults, who are at higher risk from the virus. Pfizer’s vaccine is currently authorized for ages 16 and older.

Pfizer’s initial trials among adults showed a 95 per cent efficacy rate among its 20,000 participants.

The company said at the time that only eight people out more than 20,000 who got the vaccine caught Covid, compared to 162 who were given a fake jab. A total of 10 people got severe Covid, one of whom had been given the real vaccine.

Germany last night became the latest EU member state to halt the rollout of the jab to people under 60 while it probes a link between the vaccine and a small number of cases of blood clots.

UK experts claimed the decision to withhold the British-made jab on the continent due to an extremely rare risk of clotting would lead to fewer Britons coming forward for their vaccine.

Dr Simon Clarke, a microbiologist at the University of Reading, told MailOnline it ‘seems likely’ there will be some ‘avoidable deaths’ in the UK on the back of the EU bans.

His comments were echoed by Dr Peter English, a former British Medical Association chief, who slammed EU nations for stoking fears about the vaccine.

He said there was ‘no evidence’ vaccination was behind the clotting, adding: ‘Any decision to withhold the vaccine will directly cause excess, avoidable Covid deaths.’

Meanwhile, Communities Secretary Robert Jenrick today pleaded with Brits to keep their faith in the AZ jab, pointing out that ‘study after study’ had shown it was safe.

When concerns were first raised about the vaccine’s link to clots earlier this month, GPs in England warned as many as one in 10 patients were either not showing up, asking to cancel or double-checking which jab they were getting before attending their appointment.

There are fears the problem will become more widespread as countries on the continent continue to revolt against the jab.

The EU is currently battling a third Covid wave which has sent several countries back into national lockdowns and is struggling to get its vaccination programme up to speed.

Yet several member states have paused rollouts of the AstraZeneca vaccine after a tiny number of inoculated people, predominantly women under 55, suffered deadly brain clots.

The World Health Organization said today it continues to monitor the jab’s safety but the benefit-risk assessment ‘weighs heavily in favour of its use’.