Our live coverage of the extreme weather is free for all readers. Please consider supporting our journalism with a subscription.

As of 5am on Friday, there was a severe thunderstorm warning for parts of the Mid North Coast and the Hunter, with residents warned that heavy rain could lead to flash flooding.

“An east coast low lies off the Mid North Coast and is pushing a near stationary area of rain onto the coast, along with some isolated embedded thunderstorms,” the warning said. 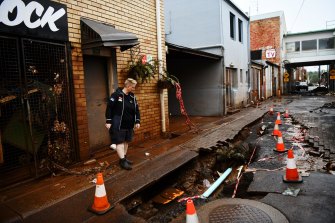 The bureau cancelled its severe weather warning for much of the NSW including Sydney, Northern Rivers, Central Tablelands, Snowy Mountains and the Lower Western.

“A few thunderstorms remain possible over the NSW central coast and adjacent inland, with a small risk of more localised heavy rainfall – severe thunderstorm warnings will be issued if this eventuates,” the bureau said.

For those who may be returning to their homes after being evacuated, the SES has issued a guide.

While Sydney was spared the worst of the flooding on Thursday, major flooding still occurred on the city’s fringe, where the water peaked at 12.2 metres at Windsor last night as it headed downstream toward Wisemans Ferry.

The expected spillover from Warragamba Dam was also revised down from 600 gigalitres to 300 or 350.

“We are not going to see a worsening of the situation which was originally feared … thanks to the weather tracking further north than the bureau expected,” said State Emergency Service (SES) spokesman Phil Campbell.

Along the Georges River in the south-west, locals said floodwaters peaked at about midnight and were receding by Thursday afternoon. The SES had “a much more reasonable day” with 1200 calls between 8am and 5pm and 13 flood rescues, compared to hundreds on Wednesday.

The water was likely to hang around western Sydney for some time, and it was unlikely evacuated residents would be cleared to return before the weekend, Mr Campbell said.

Hello and welcome to our live coverage of the disastrous floods that in recent days have inundated and devastated communities in NSW and Queensland.

Sydney dodged a bullet yesterday as the much-feared “rain bomb” spared the city and dumped its heaviest falls to the north and south. Floodwaters in the nation’s biggest city remained below the worst-case scenario that authorities feared. 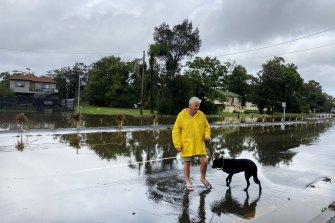 But the crisis is still unfolding for some communities in the state’s north, even as much of the floodwater has receded to reveal the full extent of the damage.

We’ll bring you the latest information as it comes in throughout the day.

You can read Thursday’s liveblog here.