He’s at it again! Cheeky orangutan squeezes another woman’s breasts at Bangkok zoo weeks after groping another female visitor

A cheeky orangutan in Thailand has made a habit of groping women who come to visit his enclosure.

The promiscuous primate greeted tourist Angel Orangelor, 27, by wrapping her in his embrace when she approached him in Bangkok’s Safari World on August 15.

The great ape placed its hands on her cleavage then pulled her towards him and planted a kiss on the girl’s cheek.

He then flashed a toothy grin to amused tourists while posing in front of his charge’s friends.

It came weeks after the animal pulled a similar stunt with another female visitor.

Orangutans are among the smartest primates, and as one of the least aggressive great apes are generally non-violent to humans.

But they are extremely strong and have a bite force close to that of a lion, meaning any tourist willing to interact physically with an orangutan is at risk of serious harm. 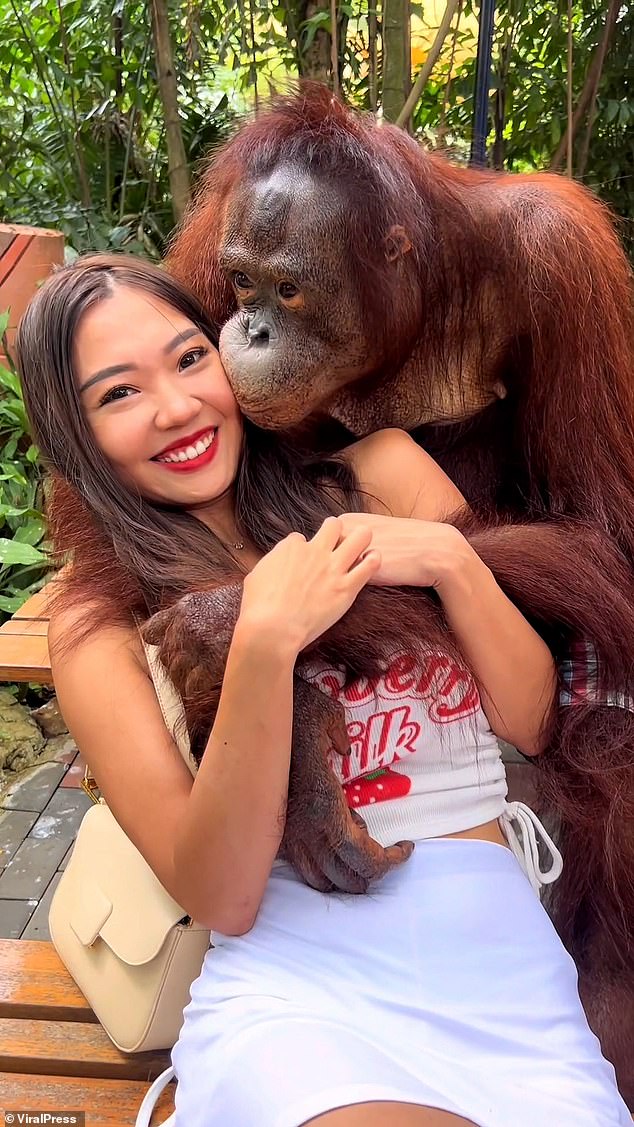 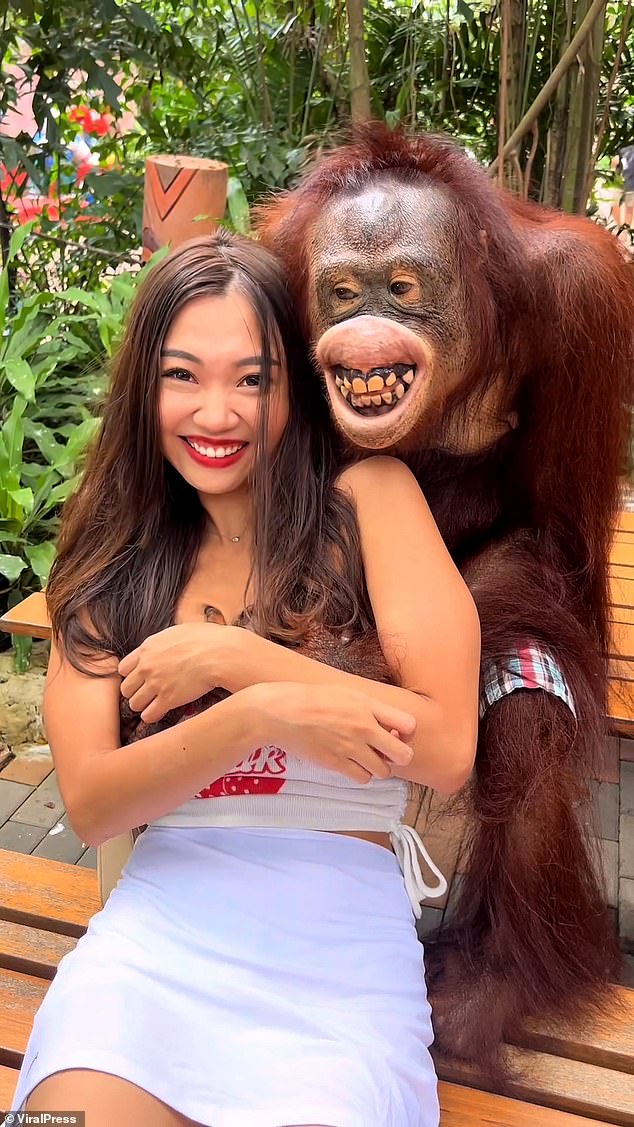 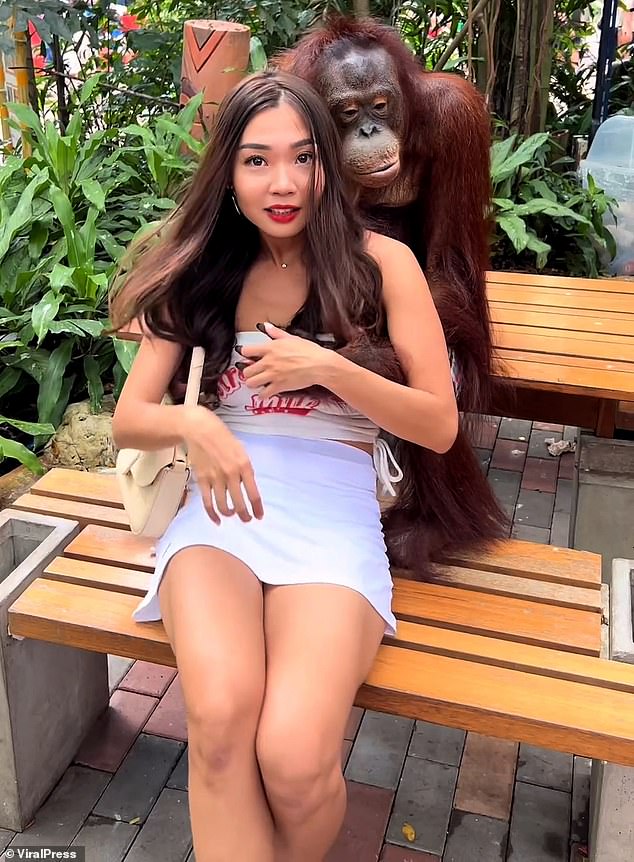 Angel, who was visiting the park while on holiday, said: ‘The orangutan was just trying to show me some love. He looked very cute. He didn’t hurt me and he was being friendly.

‘My friends thought it was funny. We had a real bond.’

Angel was visiting the safari park on a trip with friends when the incident happened last week.

Her friend Fran said: The last moment where you’re looking at him and he was sticking out his tongue, is so precious.’

Another pal added: ‘He knows he can’t get into trouble for doing this, that’s why he’s laughing.’

The same orangutan pulled a similar stunt on June 27, when he sidled up behind a visitor and cupped her breasts, before grinning and kissing her cheek.

Onlooker Dararat Suwanmai, 24, said of the incident: ‘I burst out laughing when I realised what the woman was doing. He was such a friendly creature.’

The Bangkok Safari Park has a number of orangutans that visitors can pose with.

However, they have developed bad habits which include touching and kissing female visitors.

It is unclear whether the animals have been trained to perform the act, or whether they are doing so of their own volition. 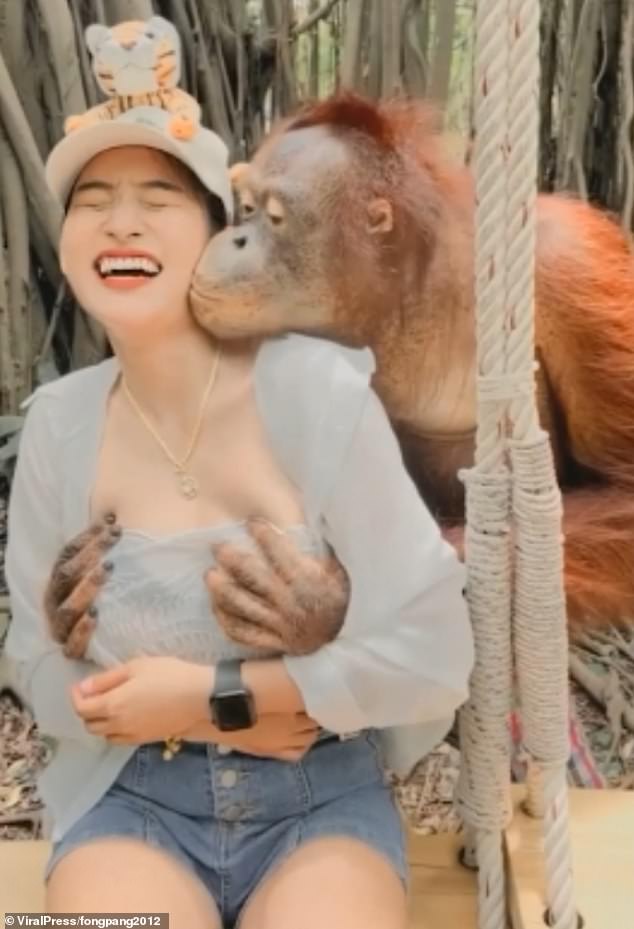 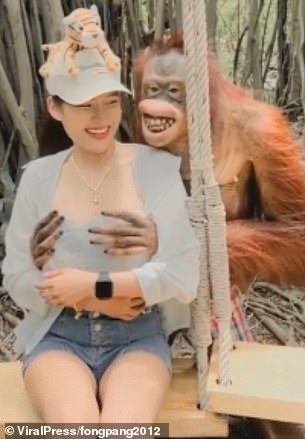 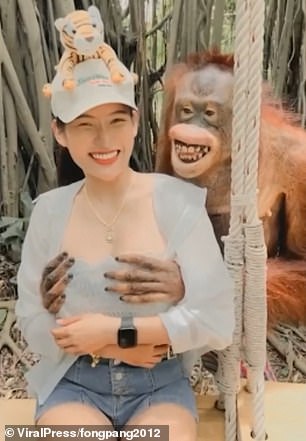 He pulled a wide grin to other tourists as he fondled her. The surprised tourist could only smile and laugh at the great ape’s antics

Orangutans are the largest tree-dwelling mammals in the world, and are the only great ape to live primarily among the trees.

They are very intelligent and are able to master the use of a variety of tools to construct sleeping nests from branches and leaves.

In the wild they play a key role in seed dispersal throughout the forest.

However, incredibly low reproduction rates in recent years off the back of deforestation, poachers and the illegal pet trade have led to a drastic decline in the wild orangutan population.

At one time the animals could be found throughout south east Asia, but now there are only a few hundred thousand found living in the wild of Borneo and Sumatra, and all three species of orangutan are critically endangered.

Orangutans are members of the ‘Great Apes’ family of animals along with gorillas, bonobos, chimpanzees and humans.

Known as ‘gardeners’ of the forest, they are primarily arboreal and play a vital role in seed dispersal in their habitats.

They are found only in the rain forests of the Southeast Asian islands of Borneo and Sumatra and prefer to live close to river valleys and floodplains of their respective islands.

They spend nearly their entire lives in trees.

Females give birth to one infant at a time about every 3-5 years, so these species can take a long time to recover from population declines.

However, most orangutans live for 30-40 years in the wild, while those in captivity are known to live even longer. With human pressure only increasing, orangutans face an increasing risk of extinction.

The name orangutan means literally ‘man of the forest’ in the Malay language.

In the lowland forests in which they reside, orangutans live solitary existences.

They feast on wild fruits like lychees, mangosteens, and figs, and slurp water from holes in trees.

They make nests in trees of vegetation to sleep at night and rest during the day. Adult male orangutans can weigh up to 200 pounds.