Britain’s panic-buying frenzy peaked in the week before lockdown as sales hit 80% above average but supermarket rationing did not work because people were only buying a little more than usual, says report

Supermarket rationing when the coronavirus pandemic swept across Britain failed to work because households were not stockpiling, a new report has found today.

In the four weeks before lockdown demand increased by more than 100% for soap, by 75% for soup, by 64% for cold treatments and by 45% for toilet roll.

As sales figures soared, supermarket bosses imposing stringent limits on goods for the first time since the Second World War.

But the measures failed to stop shelves emptying because the spike in sales were driven by many more households than usual choosing to buy moderate amounts, rather than a minority of households buying excessively large quantities. 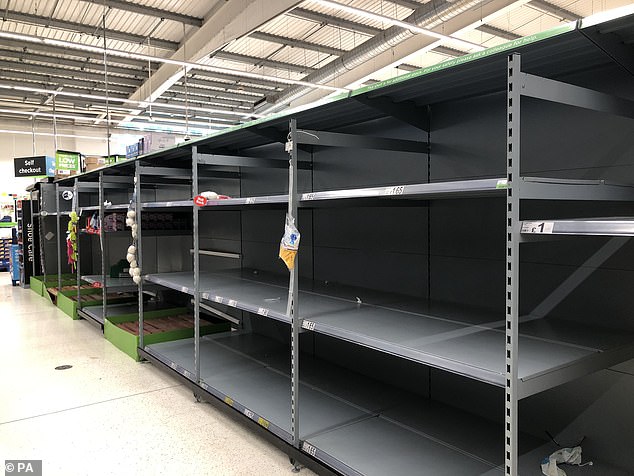 Empty shelves as toilet roll and kitchen roll sold out in an Asda supermarket in Bearsden, East Dunbartonshire on March 11 – before the UK-wide lockdown 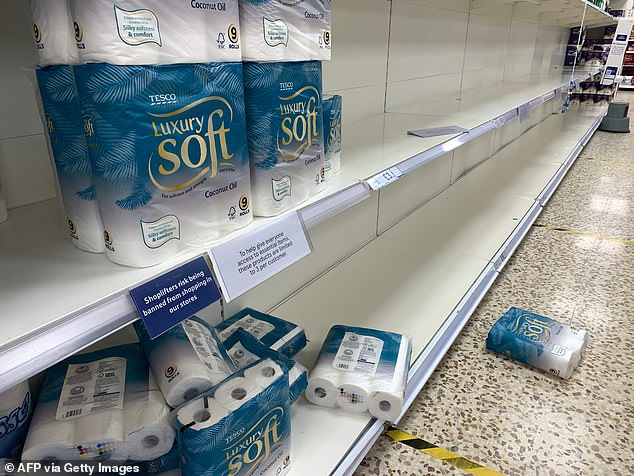 A sign limiting shoppers to one item per customer is displayed on near-empty shelves for toilet paper rolls in a supermarket in Birkenhead, Merseyside on September 29

Ocado: The online-only grocer, which started a new partnership with Marks & Spencer on September 1, remained the fastest growing supermarket overall, recording 41.9pc growth in the 12 weeks to October 4.

Waitrose: The upmarket supermarket’s online business grew even faster, thanks to rapid expansion in its own delivery slots following the end of its deal with Ocado.

Morrisons: Continued to be the best performer among the ‘big four’ with 11.5pc sales growth.

Tesco: Tesco held fast to its 26.9pc market share with 9.2pc sales growth, after its new boss Ken Murphy said it had gained customers from the German discounters.

Sainsbury’s and Asda: The giants, which were bought this month by the Issa brothers, lost share with relatively lacklustre revenue growth of just 6.8pc and 5.4pc respectively.

Aldi and Lidl: The pandemic has halted the march of the discounters, with Aldi and Lidl unable to make gains due to the fact they do not have online businesses.

The new data has emerged in a report by the Institute for Fiscal Studies (IFS) today, which used real-time data on millions of grocery transactions up until 8 August.

The analysis shows that daily spending on storable food staples peaked on 14 March 2020 at over 80% above the daily average seen in January and February.

Over the four weeks before lockdown there was more than a 25% increase in demand for 30 (out of 138) product categories, including soap, soup, and toilet roll.

Stark pictures when Britain was in the grip of the pandemic in March showed empty shelves at supermarkets across the country.

Corner shops hiked prices on items including flour, eggs and toilet roll while Tesco, Sainsbury’s, Asda and Waitrose were among the giants to impose restrictions on certain items.

But the study has shown that more households than normal were buying supplies – rather than families panic buying and stockpiling hoards of items.

It says that limits on the number of packs of each product that people are allowed to buy per visit ‘are unlikely to have prevented the spikes in demand and subsequent shortages.’

And wealthier households stocked up by more than less well-off households, the report revealed.

Kate Smith, Associate Director at IFS and an author of the research, said: ‘Given current uncertainty, it is especially important to understand how households responded in the run-up to the lockdown in March.

‘Shopping behaviour changed well before government policy. Panic in the weeks before lockdown led to huge spikes in demand for several storable products, such as soap, toilet roll, dried rice and pasta.

‘This was mainly driven by many more people than usual choosing to buy these categories, not by unreasonably large purchases by a small number of households.’

This comes as the end of the Eat Out To Help Out scheme and new Covid-19 restrictions last month saw shoppers flock to supermarkets in huge numbers once more – although without the same panic-buying seen in March, according to new data. 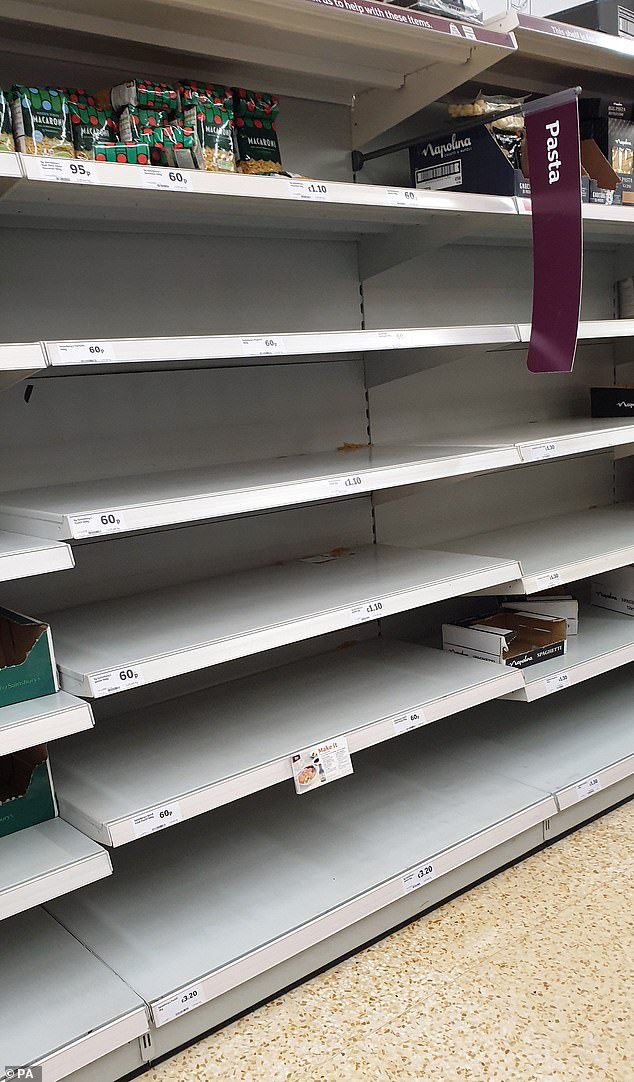 A view of empty shelves of pasta in a supermarket in Folkestone, Kent, on March 12 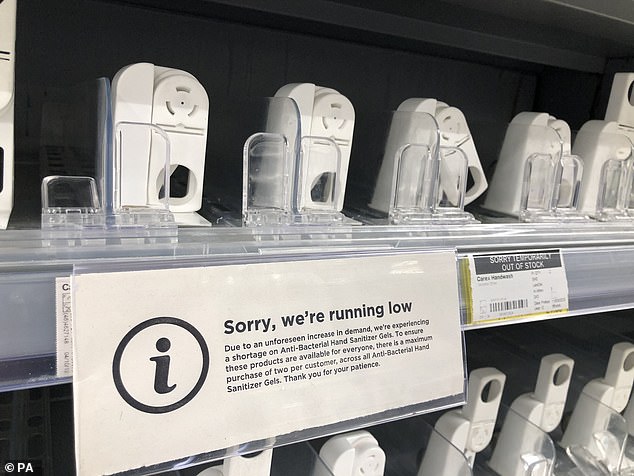 Empty shelves as hand sanitiser and hand soap completely sold out in an Asda supermarket in Bearsden, East Dunbartonshire on March 11

The surge came in the four weeks to October 4, with sales increasing 10.6% – above the 9.4% recorded across the 12-week period to October 4, according to Kantar.

With the new 10pm curfew on bars and pubs also coming into effect, alcohol sales in supermarkets rose to £261 million during the past month.

Some supermarkets had been concerned that, with a second wave, panic-buying could set in.

There were some signs of concern, with toilet roll and flour sales up 64% and 73% during the final week in September, but this is thought to have been because there were more shoppers in stores, rather than because of stockpiling.

Kantar added that online sales in the past month were up 76% on a year ago, with one in five households ordering groceries via the internet.

The proportion of sales made digitally remains unchanged from last month at 12.5%, suggesting that many shoppers are choosing to stick with deliveries as the pandemic develops.