Tagum City, Philippines: For nearly eight hours they were whipped into a frenzy as they waited for a glimpse of the man most likely to be their next president.

Finally, after they sang, danced and shouted their way through an afternoon downpour, Ferdinand “Bongbong” Marcos Jr appeared on stage to a rock-star reception.

The son and namesake of the Philippines’ late dictator is the overwhelming favourite to win Monday’s election in the south-east Asian nation of 112 million and you only needed to witness his grand rally here on the southern island of Mindanao for an indication why.

The tens of thousands assembled on a field in front of the Tagum city hall created a sea of red and green, the colours of Marcos and his running mate in the separate vice-presidential race, Sara Duterte. Helicopters flew in low to shower confetti – red and green, of course – on the masses as a full bill of performers, from dance troupes to famous artists, teased out the arrival of the main attraction all day.

The location was on the turf of the daughter of outgoing president Rodrigo Duterte – she was after all until recently the mayor of Davao City, 90 minutes down the highway, as her father was for 22 years before her. 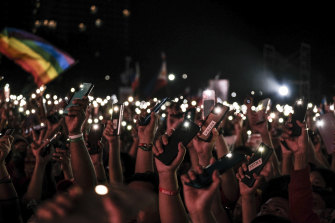 Supporters of Marcos and Sara Duterte have come out in force.Credit:Bloomberg

Even in a country whose politics has been dominated by dynasties over the years the Marcos-Duterte double act is a compelling ticket for millions of Filipinos, aligning the forces of the south and north, where the Marcoses have been prominent in government since returning from exile in Hawaii three decades ago.

However, on the cusp of a stunning reclaiming of the Malacanang, the presidential palace, in the name of his notorious family, this was Marcos’ night.

“It is our responsibility to cast our votes to help our country,” the 64-year-old said, greeting supporters to chants of “BBM! BBM!“, the acronym taken from his nickname and surname. “We are promising you we will work to the best of our ability so that we can rise again.”

Political campaign stops can more closely resemble pop concerts in the high-octane Philippines, with the crowd revved up between musical performances before anyone sees the candidates. Senators and congressmen often fulfil ultimate karaoke fantasies by taking to the microphone and belting out tunes themselves.

The Marcos rallies in the lead-up to election day have been even more outsized and carefully choreographed affairs, part of the vote-wooing machinery that has careered him to frontrunner status

The most recent Pulse Asia survey in April had Marcos leading polling with 56 per cent, well ahead of the next closest contender, current vice-president and opposition frontwoman Leni Robredo (24 per cent), who narrowly beat him in the VP’s race six years ago.

Victory this time around would complete the most astounding of rehabilitations for the Marcoses.
They are still being pursued for most of the $US10 billion ($14 billion) they were alleged to have plundered from the state before leaving in a hurry in 1986 when Ferdinand Marcos Snr was deposed by the people power revolution.

Marcos’ candidacy has for victims revived distressing memories of martial law under his father, a period during which groups say 34,000 people were tortured and over 3000 were killed or disappeared. There have been attempts to have him disqualified from the race over a 1997 conviction for failing to file tax returns. 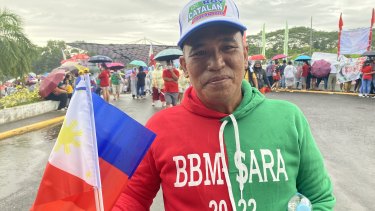 Arnold Napoles, 54, at the rally in Tagum City.Credit:Chris Barrett

But in a country whose startling inequality has been hammered home by the struggles endured during the COVID-19 pandemic, the Marcos legacy has been anything but a hindrance to his chances if you listen to his supporters.

“So many beautiful things happened before during the reign of his father, during martial law,” said Arnold Napoles, 54, an attendee in Tagum on Thursday night. “It was a good time, very progressive.

“I don’t think bad things about martial law. I think Ferdinand Marcos Jr, he will rehabilitate all the bad things happening now in the Philippines.”

Ichelle Jane Talaboc, a 20-year-old physical education student at the University of Mindanao and a first-time voter in this election, said she hadn’t been taught about the era of Marcos Snr’s rule when she was at school. 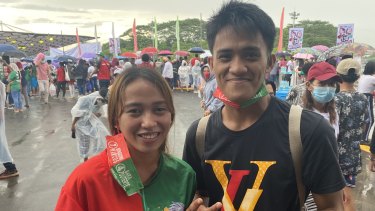 Ichelle Jane Talaboc with Mike Joy Leonar, both 20, turn out to see Marcos in Mindinao.Credit:Chris Barrett

“But I really support [Marcos]. I feel that he is a good person, a good leader,” she said. “They [Marcos and Duterte] help a lot of us people here”.

She nominated poverty and education as the two biggest issues facing her region. Evidence of both was very noticeable at Marcos’ grand rally in Mindanao.

When the son-in-law of the mayor turned up in a pick-up truck there to distribute bread rolls donated by sponsors, there was a mad rush. Many were teenagers and young adults, jumping on the Bongbong bandwagon after an excruciating two years in which schools and universities have been closed for face-to-face learning and for a long time children were ordered to stay indoors.

Experts fear thee will be a devastating long-term impact for a whole generation across the country as a result.

It’s not clear how Marcos would address that or myriad other social ills confronting the Philippines. Light on policy, the BBM bid for the presidency leans heavily on a picture of his father’s leadership as a heyday of economic prosperity and stability, whitewashing the rights abuses and corruption that marked his time in charge.

Opponents and analysts have hit out what they say is a re-writing of history aided by a well-executed and sustained disinformation campaign on social media, which Filipinos use as much as just about any other population on the planet.

While Duterte has not endorsed Marcos or any other of the contenders to succeed him, the current president has also played a role in the restoration of the family’s image. Long after Marcos Snr’s death in Hawaii in 1989, he permitted his burial at the Manila National Heroes Cemetery.

Marcos has said previously that he “cannot apologise for what somebody else has done”. But after dodging media questions and skipping public debates in the run-up to the election, he used a rare interview last week to describe his father was a “genius”.

Richard Heydarian, a political scientist at the Polytechnic University of the Philippines in Manila, argues the Marcos camp has been “trafficking in the politics of nostalgia, appealing to imagined glories of the past”. 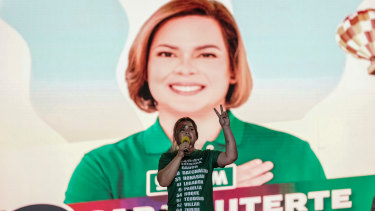 Sara Duterte had been the presidential frontrunner before deciding to vie for the vice-presidency instead.Credit:Bloomberg

The TikTok soundbites and Facebook clips, coupled with the pact with Sara Duterte, appear to have worked. If the polls are right, Marcos is headed for an historic majority when as many as 67 million voters cast their ballots next week.

Robredo, 57, will make a last push to upset him with a final rally of her own in Metro Manila on Saturday, shutting down a section of the metropolis in the expectation of a giant turnout of her own in pink, her adopted colour.

Should Marcos prevail next week, though, Heydarian fears a further and long-lasting slide into the brand of populist authoritarianism that has characterised Duterte’s constitutionally limited single six-year term.

“I think the Philippines is moving in a very troubling, perilous direction,” he said.

“President Duterte over the past six years has undermined all the foundations of the Philippines’ liberal democratic institutions but he hasn’t had enough time or focus or discipline to really push it over the edge. Should the Marcoses win, I think they’ll be in a position to do that.”

The urbane and westernised Marcos – he attended Oxford University, although there has been dispute over whether he graduated – is unlikely to shoot from the hip the way Duterte has, calling then US President Barack Obama “a son of a bitch” and telling reporters they were “not exempted from assassination”.

Marcos has also forecast a more targeted approach while continuing Duterte’s war on drugs, which rights organisations estimate has led to as many as 30,000 extra-judicial killings, focusing on kingpins rather than street dealers. The Australian government will also be watching where he lands on dealing with China over territorial rows in the South China Sea, having indicated he has no other choice but to work with Beijing.

But the election of Marcos would, for obvious reasons, almost certainly hinder the pursuit by Philippine authorities to recover more than $US6 billion in ill-gotten wealth from the Marcoses, be it from properties held abroad or cash in Swiss bank accounts.

And with presumptive vice-president Sara Duterte positioned to be next in line for the top job in 2028 after joining with Marcos this year, power may end up being concentrated in the same two clans for many years to come.

“I think we’re going to be a hybrid regime, more like Malaysia and Singapore, if not Turkey, where we have elections and there’s a facade of free press and all,” Heydarian said.

“But we know which dominant party, or in the case of the Philippines, which cartel, will essentially run the show.”