Has Omicron spread worldwide already? At least 61 passengers out of 600 who landed in Holland from South Africa yesterday ‘have Covid’ – and Belgian super-variant case had NEVER been to southern Africa

At least 61 new cases of Covid have entered the Netherlands from South Africa, the Dutch health ministry has revealed as fears mount over the new super mutant variant Omicron.

Around 600 passengers arrived on two planes in Schipol Airport, near Amsterdam, from Johannesburg — the epicentre for the new strain which experts fear is 40 per cent more vaccine evasive than Delta — hours after travel bans were put in place.

Countries across Europe closed their borders to countries in southern Africa yesterday as a measure against the variant but cases have already been detected in Israel and Belgium — despite the woman who tested positive for the strain there never having been to southern Africa.

The US has joined the growing list of countries, with President Joe Biden saying the pandemic will not end until global vaccinations ‘are in place’. And Australian authorities — who also banned travel to nine countries in the region — fear the variant may have already entered the country.

The passengers in the Netherlands have been placed in quarantine hotels while the authorities investigate whether they have been infected with the variant. Some complained at being left on the plane for hours with no snacks or water.

Authorities in the country have just announced the early closure of bars, restaurants and some shops due to the record-breaking surge of Covid sweeping through the country.

It comes as Boris Johnson prepares to implement fresh travel bans on a host of countries, after Britain halted flights to South Africa, Namibia, Lesotho, Botswana, Eswatini and Zimbabwe yesterday.

Experts warned Britain could face restrictions being reintroduced in the country this Christmas but the Prime Minister hopes travel bans could prevent the need for another lockdown.

England’s Chief Medical Officer Professor Chris Whitty said he fears Britons will not accept lockdown rules to fight off the variant over the winter because of ‘behavioural fatigue’ caused by two years of restrictions.

No cases have been recorded in Britain so far but  Dr Susan Hopkins, chief medical adviser of the UK’s Health and Security Agency (UKHSA), warned it was ‘possible’ the strain’ is already in the country. 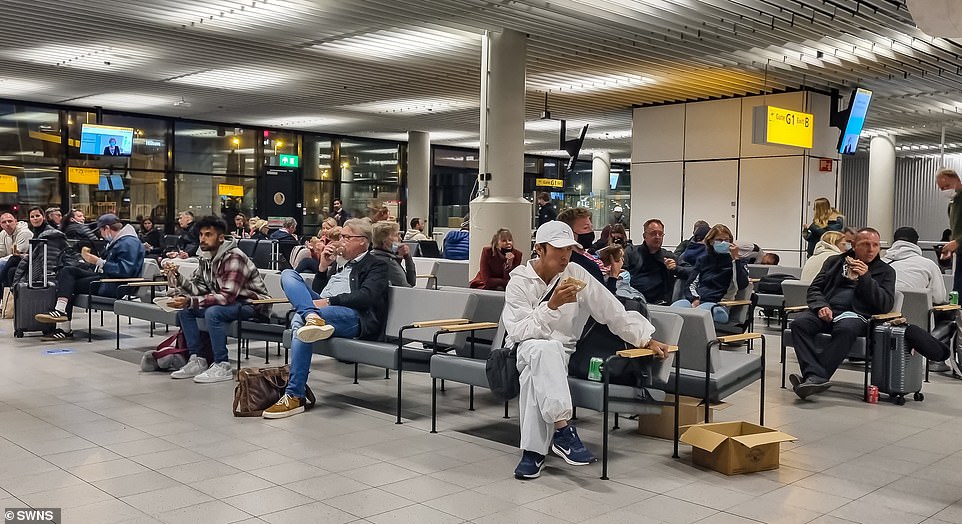 Passengers from KLM flight KL598 from Cape Town, South Africa wait to be screened at Amsterdam Airport, the Netherlands, yesterday 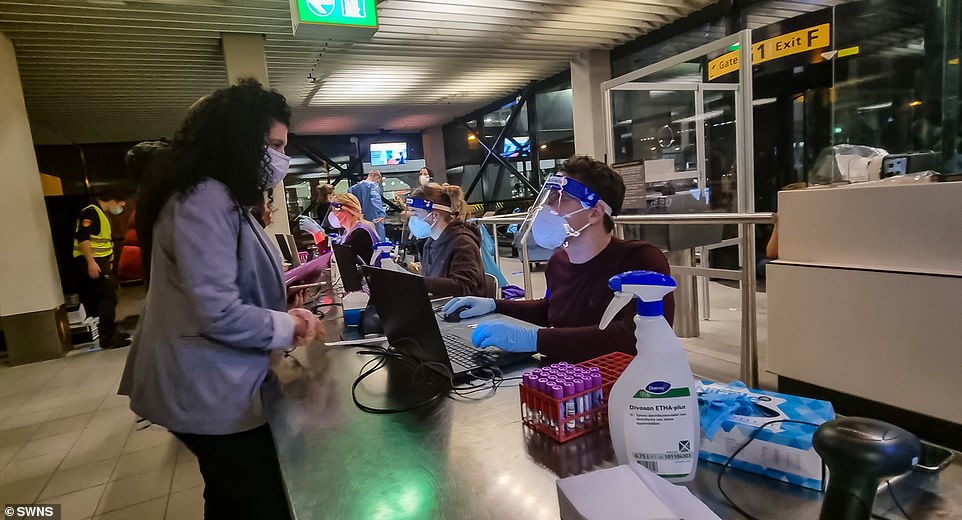 A woman from the KLM flight KL598 from Cape Town, South Africa, queues for her Covid test at Amsterdam Airport last night 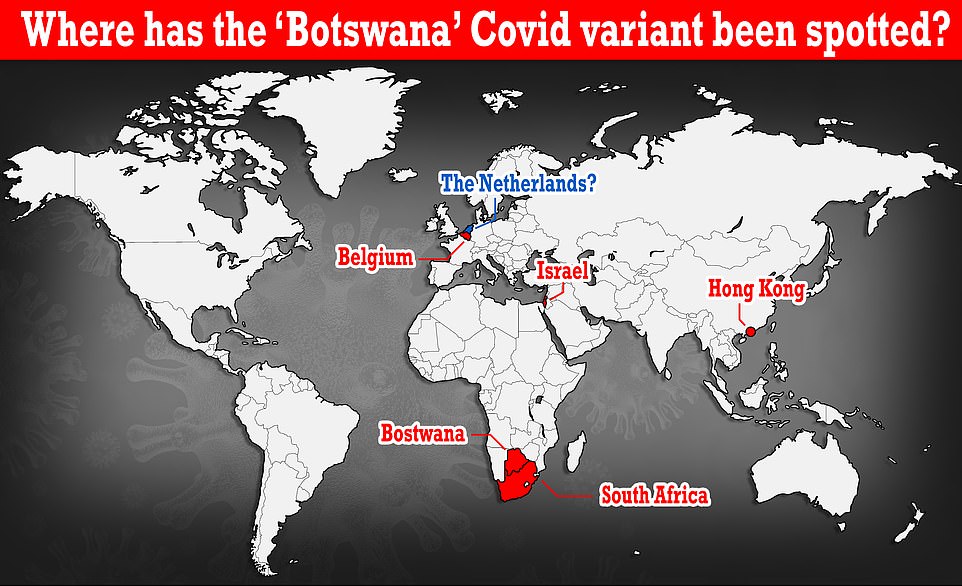 Cases of Omicron have already been picked up in South Africa, Botswana, Hong Kong, Israel and Belgium. It is not yet known whether the variant arrived in the Netherlands yesterday but Dutch authorities are sequencing passengers’ tests 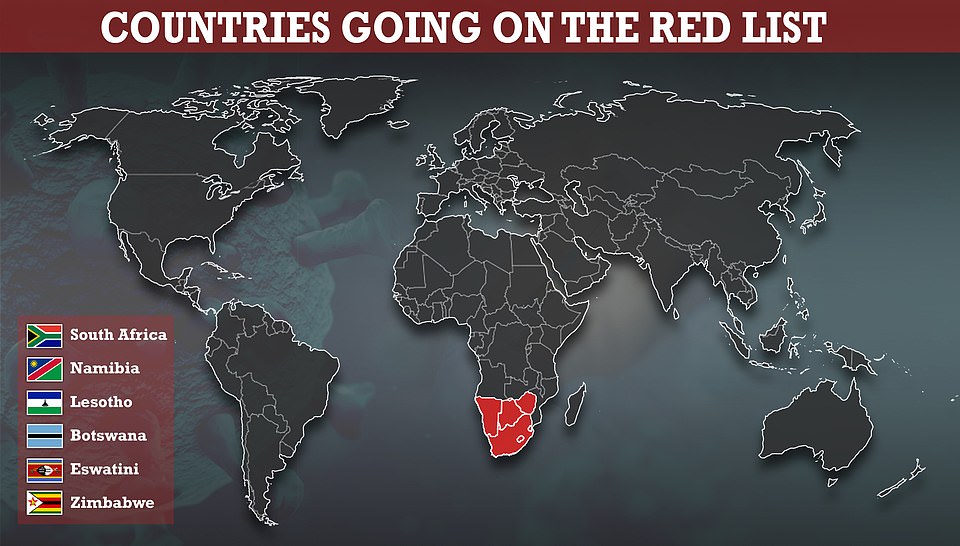 Scientists have said they are concerned about the B.1.1.529 variant, named by the World Health Organisation as Omicron, as it has around 30 different mutations – double the amount present in the Delta variant. The mutations contain features seen in all of the other variants but also traits that have not been seen before.

UK scientists first became aware of the new strain on November 23 after samples were uploaded on to a coronavirus variant tracking website from South Africa, Hong Kong and then Botswana.

On Friday, it was confirmed that cases had been identified in Israel and Belgium but currently there are no known cases in the UK.

Professor Adam Finn, a member of the Joint Committee on Vaccination and Immunisation (JCVI), told Good Morning Britain on Friday that sequencing is being carried out around the UK to determine if any cases have already been imported.

Work is also under way to see whether the new variant may be causing new infection in people who have already had coronavirus or a vaccine, or whether waning immunity may be playing a role.

Professor James Naismith, director of the Rosalind Franklin Institute in Oxford, has said the new variant will ‘almost certainly’ make vaccines less effective, though they would still offer protection.

Pfizer/BioNTech, which has produced a vaccine against Covid-19, is already studying the new variant’s ability to evade vaccines.

On another day of coronavirus chaos:

The 61 people testing positive for Covid in Amsterdam are currently in isolation while officials sequence their tests for Omicron.

‘We now know that 61 of the results were positive and 531 negative,’ the Dutch Health Authority (GGD) said in a statement

‘Travellers with a positive test result will be placed in isolation at a hotel at or near Schiphol.

‘Of the positive test results, we are researching as quickly as possible whether they are the new variant of concern, now named Omicron.’

The Dutch government banned all air travel from southern Africa early on Friday. Health Minister Hugo de Jonge said that passengers already en route to the Netherlands would have to undergo testing and quarantine upon arrival.

Passengers on the two KLM flights, from Cape Town and Johannesburg, said they were kept waiting on the tarmac for hours.

Stephanie Nolen, a New York Times journalist and passenger on the flight, wrote on social media: ‘Vigorous applause because there is a bus that has come to take us somewhere.’

In a later Tweet, she said: ‘Bus to a hall to a huge queue. I can see Covid testers in bright blue PPE far on the distance. Still no snacks for the sad babies.’

A spokesperson for the health authorities in Kennemerland, the Dutch region that oversees Schiphol, said the positive cases were being analysed by a Dutch academic medical hospital to determine whether they are the new strain.

South African experts yesterday moved to calm the wave of panic over the variant, describing it as a ‘storm in a tea cup’, despite fears

Meanwhile, British vaccine task force member said travel bans will not keep the new variant away from British shores but could delay a potential surge in cases beyond the festive period to protect the NHS from further pressure.

Experts however have insisted there is ‘no plausible scenario’ in which Omicron will take the UK back to ‘square one’, and called for ‘calm heads’ despite the halting of flights from southern Africa. 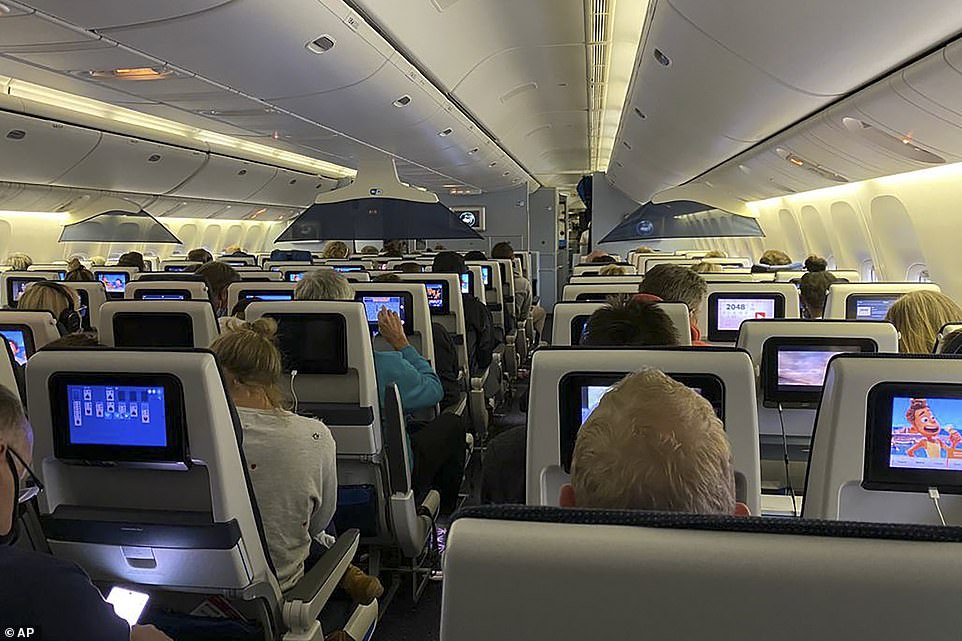 Passengers sit in their seats aboard KLM Flight 598 on the tarmac at Schipol airport in Amsterdam after it landed from Cape Town, South Africa, yesterday 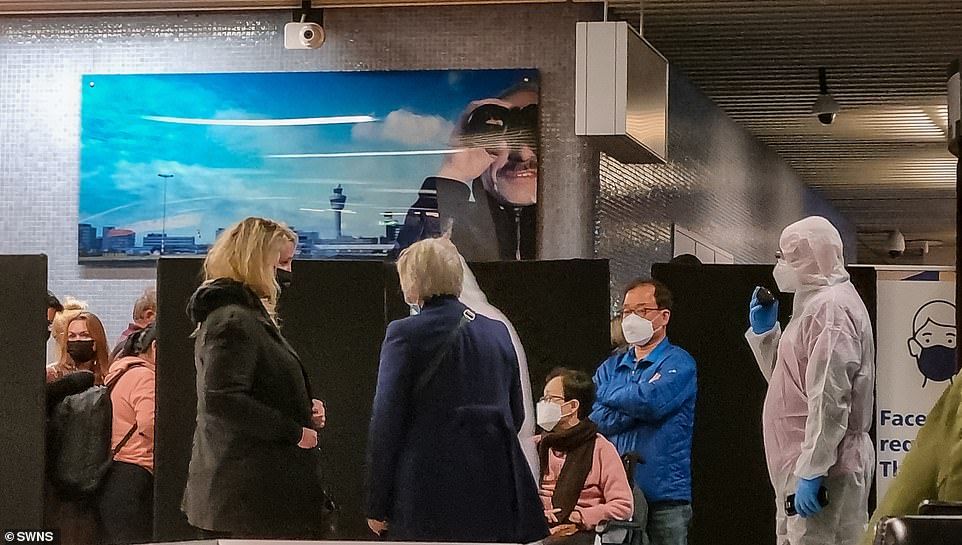 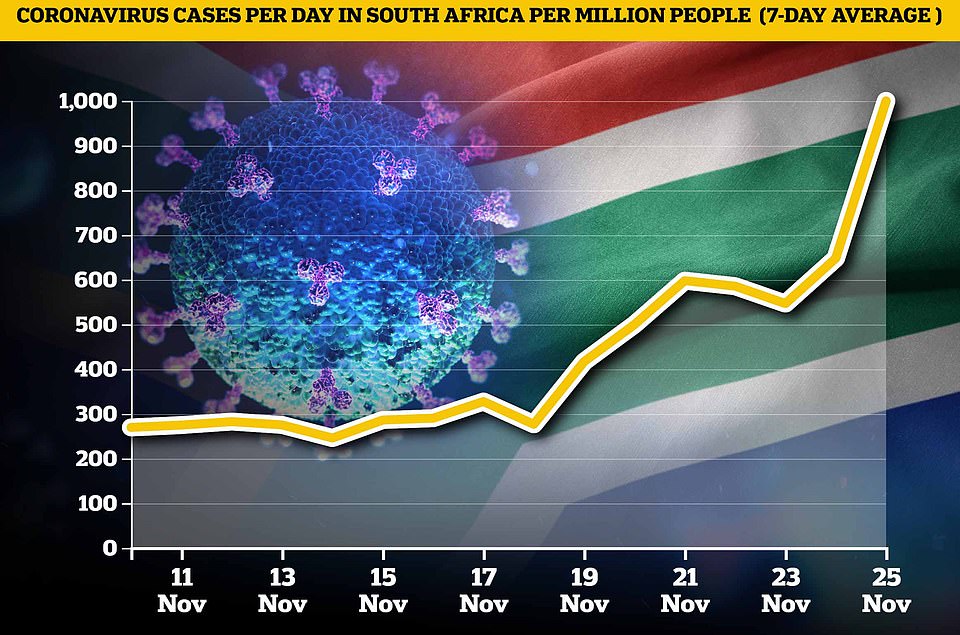 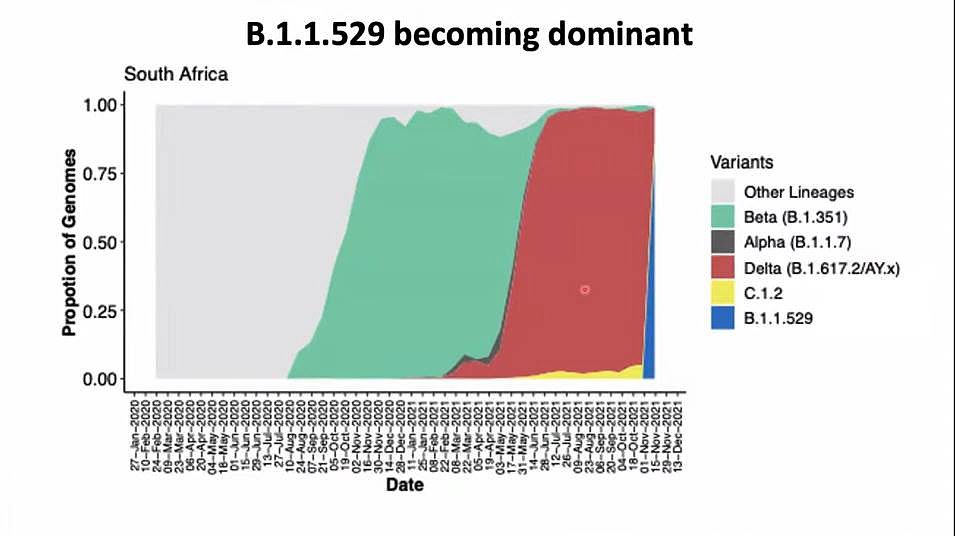 This chart shows the proportion of cases that were the B.1.1.529 variant (blue) and Indian ‘Delta’ variant (red) over time in Guateng province in South Africa, where the virus is most prevalent. It suggests that the mutant strain could outcompete Delta in the province within weeks

Scientists in South Africa are scrambling to combat the lightning spread of the highly transmissible new Omicron variant of Covid that was first detected in the country.

In two weeks, the variant has sent South Africa from a period of low transmission to rapid growth of new confirmed cases.

‘We’re seeing a marked change in the demographic profile of patients with Covid,’ Rudo Mathivha, head of the intensive care unit at Soweto’s Baragwanath Hospital, told an online press briefing.

‘Young people, in their 20s to just over their late 30s, are coming in with moderate to severe disease, some needing intensive care. About 65 per cent are not vaccinated and most of the rest are only half-vaccinated,’ she said.

‘I’m worried that as the numbers go up, the public health care facilities will become overwhelmed.’

Health Secretary Sajid Javid told MPs that, while there was ‘huge international concern’, vaccines had put Britain in a strong position.

Scientists said existing jabs could be tweaked to tackle the variant. And a World Health Organisation representative said that resorting to ‘Plan B’ measures so quickly, such as working from home or vaccine passports, would be an over-reaction.

But news of the variant saw the FTSE 100 — the UK’s leading share index — suffer its sharpest drop since January, closing down at 3.7 per cent, spelling alarm for travel companies banking on winter bookings.

A senior aviation source told the Times there were ‘serious jitters’ in all corners of the industry, adding: ‘There is now a massive question mark over Christmas. It is clear the red list will expand and that will have a massive knock on.’

Meanwhile, Government sources said ministers ‘want to restrict travel to avoid restrictions at home at all costs’, even if it means risking a serious blow to the travel industry.

Originally known as the ‘Botswana’ variant, the strain was last night named ‘Omicron’ by the WHO and officially designated a ‘variant of concern’.

Its discovery earlier this week was so significant because it has around 30 mutations, including some linked to an increased risk of transmission. One expert described it as the ‘worst’ variant so far.

In a rush to limit the spread, the EU suspended all flights to southern Africa after the first case was confirmed in Europe. Britain had already put six nations on the travel ‘red list’ – and was poised to add two more last night.

A government adviser suggested that the public should be ‘ready for the possibility’ of a return to Covid restrictions. But a senior government source told the Mail: ‘People should not panic.’

It come after former Prime Minister Gordon Brown warned rich nations that not sharing vaccines is ‘coming back to haunt us’.

Mr Brown also blasted the European Union for ‘neocolonialism’ over the bloc’s move to buy up jabs made in South Africa.

The former Labour leader claimed the emergence of new strains such as Omicron, a super-mutant variant first reported in South Africa on November 24, could have been avoided if the West had properly shared vaccine supplies.

He said the West had been ‘forewarned’ of the failure to do share vaccine doses but that still only three per cent of people in low income countries had been jabbed compared to around 60 per cent in rich nations.

‘In the absence of mass vaccination, Covid is not only spreading uninhibited among unprotected people but is mutating, with new variants emerging out of the poorest countries and now threatening to unleash themselves on even fully vaccinated people in the richest countries of the world,’ Mr Brown wrote.