Vulnerable women with steady but low incomes could have a path to home ownership under a new model of property development backed by the National Housing Finance and Investment Corporation. 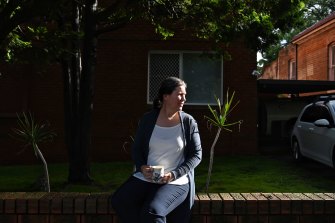 Karen was a working professional until she was made redundant in her 40s and fell into homelessness.Credit:Nick Moir

The concept is a twist on “build-to-rent”, where the developer becomes the landlord and manages the property rather than selling the apartments to owner-occupiers and investors. Instead, it is dubbed as “build-to-rent-to-buy” because the women will also have the right to buy their homes.

The corporation’s chief executive Nathan Dal Bon said the proposed pilot study was in Canberra, but he hoped to replicate it nationally.

“With the model, the idea is to translate and scale it across the country,” Mr Dal Bon said. “There’s still a bit of work to do, but we’re in dialogue with other stakeholders across other jurisdictions who are also looking to pilot housing initiatives for vulnerable women, so my hope is there’ll be more initiatives next year.”

The project, which is still in the planning stages with a goal to start construction later this year, would mean a woman would pay affordable rent to a community housing provider over a 10-year period and then have the right to buy it.

The corporation has signed a memorandum of understanding with Ginninderry – a joint venture between the ACT government’s Suburban Land Agency and Riverview Developments – and community housing provider Community Housing Canberra, to deliver a “proof of concept” for vulnerable and at-risk women.

The exact model is to be determined, but it is likely that the rent would be capped at 74.9 per cent of market rent and the woman would be granted a share in capital growth and the savings from the operational efficiencies and cheaper finance.

Mr Dal Bon said the option to buy the property and take on a mortgage would be more suited to younger women, so the project partners were also considering shared equity models to include older women.

The project was targeted at women because official figures show older women are the fastest-growing group at risk of homelessness.

Housing for the Aged Action Group executive officer Fiona York said older women faced ageism in the workforce and were less likely to have achieved home ownership, or may have lost it in a divorce.

Projects like the proposed build-to-buy-to-rent scheme are “particularly good for the working poor or women who have a small amount of savings that means that they’re ineligible for social housing, but they can’t afford to get into the market,” Ms York said.

“Providing security of tenure for people who are falling through the gaps is a great initiative, but it doesn’t address the most vulnerable older women who are on welfare payments like JobSeeker or the pension.”

The action group estimated in 2020 there were 405,000 women nationally aged 45 and over at risk of homelessness, based on figures from the Household, Income and Labour Dynamics in Australia survey. That includes 110,000 women in NSW and 120,000 in Victoria.

Figures from the Australian Institute of Health and Welfare suggest the COVID-19 pandemic and associated lockdowns have exacerbated the problem because of the heightened incidence of family violence.

Karen, who requested her last name withheld, is a 54-year-old woman who became homeless after being made redundant 15 years ago. She is living in social housing in Ashfield, in Sydney’s inner west.

Karen previously worked as a personal assistant for a small engineering firm and rented a two-bedroom apartment. After she lost her job, she completed further training but found she was unable to work full time because of debilitating migraines.

“There’s no lease and you’re at the mercy of the caretaker who has the key and can go in your room at any time,” she said.

“The [second boarding] house was full of bed bugs and I couldn’t sleep. The owner was unwilling to get a pesticide person in because one of the other tenants who had a mental health issue was collecting them in a jar and was really proud of them.”

Ms York said Karen’s experience was common. “It’s quite horrifying actually the number of older women that come to us that were working professionals until their mid-50s and then, all of a sudden, find themselves unable to re-enter the workforce,” she said.

In December, the NSW Ageing on the Edge Forum, a coalition of groups in the homelessness and community housing sector including the Housing for the Aged Action Group, launched the Home At Last: Solutions to End Homelessness in NSW report.

The report recommended the NSW government fund a specialist older person’s housing information and support service that offers both an early intervention and crisis response. This could be modelled on the “Home at Last” model in Victoria, found by Ernst & Young to deliver social benefit worth $2.30 for every $1 invested.

The report also called for the government to urgently lower the priority age for social housing eligibility from 80 years, and build 5000 social and affordable homes a year for 10 years, with 1000 of them dedicated to older people.

A spokesperson for the NSW Department of Communities and Justice said the government offered rent assistance for people in the private rental market and prioritised social housing for people who are homeless, escaping domestic violence or with severe and ongoing medical conditions.