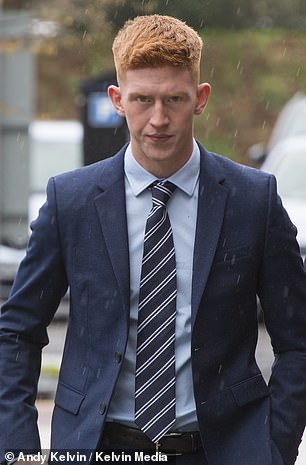 The son of Paul Scholes has been pictured arriving with his father as the teenager prepares to be sentenced for assault.

He left his victim with blood shot eyes and bruises all over his face after the unprovoked attack on the day of England’s 2-1 victory over Tunisia in last year’s World Cup.

Arron Scholes has been found guilty of beating up the former school friend then taking pictures of his injuries during a ‘happy slap-style’ attack.

During the attack at the Granby Arms in Uppermill, Greater Manchester, Mr Kemper – who was drunk – was seen lying flat on his back and offering no resistance while Scholes beat him about the face.

The incident occurred on June 18 last year after Mr Kemper had been drinking heavily after watching world cup match with friends. 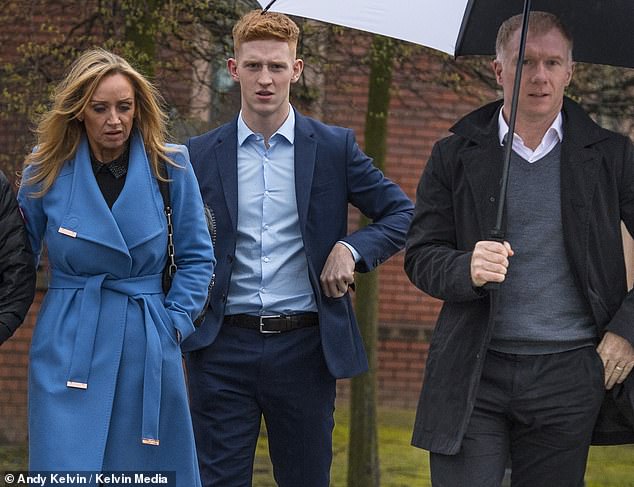 Arron is pictured arriving at Tameside Magistrates’ Court this morning with his father, Manchester United legend Paul Scholes, and his mother Claire

The teenager – eldest of three children to the Old Trafford favourite – was then seen ‘jumping up and down and laughing hysterically’ before taking a picture of the victim’s injuries on his mobile phone. 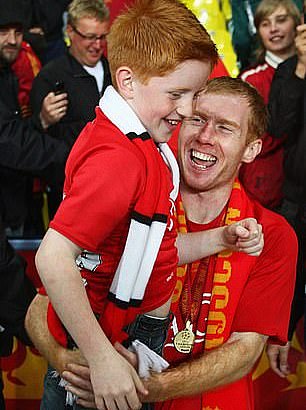 Mr Kemper remembered little of the attack himself – but previously said in the moments leading up to the assault he recalled saying ‘hello- alright mate!’ only to get ‘very little response.’

Scholes, a striker for Manchester league club Royton Town, denied assault by beating claiming he was acting in self defence but he was convicted on March 18 after a trial.

The sports marketing management student at Manchester Metropolitan University who lives with his family in a luxury property in the village of Grasscroft.

He looked crestfallen as his 43-year old father and also his mother Claire watched from the public gallery when the verdict was reached.