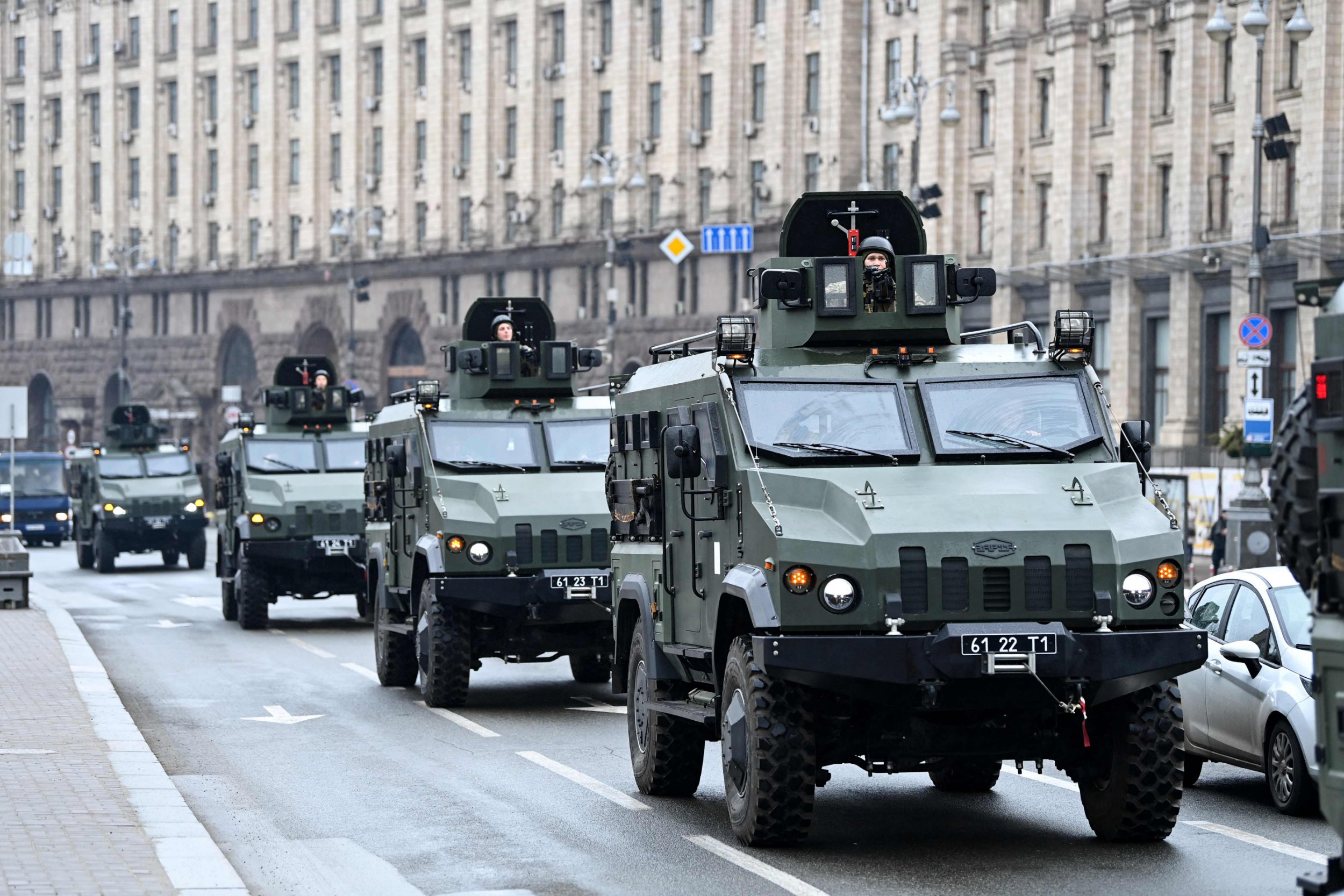 NATO has agreed to increase its land, sea and air forces on its eastern flank near Ukraine and Russia as a humanitarian crisis looms.

It comes after President Vladimir Putin ordered a full-scale invasion, in what has been described by Boris Johnson as a ‘catastrophe’ for Europe.

NATO Secretary-General Jens Stoltenberg told a news conference: ‘Peace on our continent has been shattered.

‘Russia is using force to try to rewrite history, and deny Ukraine its free and independent path.’

In a statement following emergency talks held today, NATO ambassadors said: ‘We have increased the readiness of our forces to respond to all contingencies.’

While some of the alliance’s 30 member countries are supplying arms, ammunition and other equipment to Ukraine, the organisation itself is not.

NATO will not launch any military action in support of Ukraine, which is not a member.

But countries closest to the conflict – Estonia, Latvia, Lithuania and Poland – are among those to have triggered rare consultations under Article 4 of NATO founding treaty.

This can be launched when ‘the territorial integrity, political independence or security of any of the (NATO) parties is threatened’.

In a statement, envoys said: ‘We have decided, in line with our defensive planning to protect all allies, to take additional steps to further strengthen deterrence and defence across the alliance.

‘Our measures are and remain preventive, proportionate and non-escalatory.’

The three countries added: ‘We would need to urgently provide Ukrainian people with weapons, ammunition and any other kind of military support to defend itself as well as economic, financial and political assistance and support, humanitarian aid’.

Describing Moscow’s attack as a ‘threat to the entire world and to all NATO countries’, Estonian Prime Minister Kaja Kallas tweeted: ‘The most effective response to Russia’s aggression is unity.’

NATO is planning to create battle group structures like it already has in Baltic states for the countries on its eastern flank, Slovak Foreign Minister Ivan Korcok said.

He said the move would involve his country, which has given its agreement ‘to start planning such steps, which are necessary to do for the defence of the alliance and Slovakia’.

Russia’s invasion comes after amassing as many as 190,000 troops on its neighbour’s borders since January.

It continually denied plans to invade, branding the West hysterical over its concerns and dismissing its intelligence as nonsense.

Vladimir Putin did demand legal guarantees that Ukraine is never allowed to join NATO, fearing the military alliance has expanded too close to its country.

But Western leaders, including Boris Johnson, argued Ukraine is an independent country that can join whatever military alliances it chooses, and said Russia is very clearly the aggressor in this scenario.

Putin’s address to Russia on Wednesday night suggests there is more to this than Ukraine’s prospective NATO membership.

He claimed Ukraine has ‘never had a tradition of genuine statehood’ and claimed the country was an integral part of Russia’s ‘own history, culture, spiritual space’.

But political science professor at New York University and Russia expert Joshua A. Tucker said: ‘We can be clear that Putin was not trying to engage in a historical debate about the intertwined histories of the Russian and Ukrainian peoples.’

He told the New York Times that Putin was laying the groundwork for the argument ‘that Ukraine is not currently entitled to the sorts of rights that we associate with sovereign nations’.

He added: ‘It was a signal that Putin intends to argue that a military intervention in Ukraine would not be violating another country’s sovereignty.’