One evening every week, Penny Lancaster slips out of the Essex mansion she shares with husband Sir Rod Stewart and catches the train, alone, to London. She leaves the veteran rocker at home to put their two young sons to bed.

For she’s training to become a police officer and is due to qualify as a special constable shortly after her 50th birthday in March. Her training for the City of London Police takes place on one weeknight every week and from 9am to 5pm on Saturday and Sunday every other weekend.

The couple have been together for two decades and Rod doesn’t try to dissuade her. ‘He knows better than to try,’ Penny says. It’s an eight-month course and will end with her taking the oath of allegiance – promising to do her duty with fairness, integrity, diligence and impartiality. She’ll then be qualified to head out on the beat, in protective armour with a baton and handcuffs.

Penny explains her motivation to become a key worker. ‘This is who I am. I could be walking the red carpet with Rod, or I could be in our stable with my goats. But there comes a time when everyone questions themselves and asks, “Who am I? Who am I at my core?” This is what I feel I should always have been doing. It’s about identity.’

It’s not as if Penny’s life isn’t already full to the brim. The dazzling 6ft 1in former lingerie model is a regular panellist on ITV chat show Loose Women, an accomplished photographer, a ferocious charity fundraiser, has done work for the Prince’s Trust and is a busy mother. She was also a contestant on Strictly Come Dancing in 2007.

Currently, she is focusing on the British Heart Foundation (BHF) and its launch of a sweepstake to raise money for the charity in which someone will win a £3 million London townhouse.

This is the kind of headline-grabbing initiative Penny’s mother Sally thought her daughter meant when she said it was time to do something to help society – not clocking on at the nick.

Penny says: ‘I told Mum that it wasn’t enough. Being a police officer is giving back to society in the most profound way. That’s true of all the emergency services – fire and ambulance, too.’ She says she never considered becoming a police officer when she was growing up.

‘I didn’t know I’d be tough enough. But as you mature, you realise you are capable of a lot more than you think.

‘Policing requires so many different skills. For example, I’m not great with computers so I couldn’t fight cyber-crime, but I know I am good with people.’

Her passion was ignited when she was invited on to a Channel 4 series, Famous And Fighting Crime, in 2019 in which celebrities tried their hand at crime-busting. ‘It was supposed to be me stepping out of my comfort zone but, in fact, it felt like it was where I was supposed to be. It was a revelation.’ 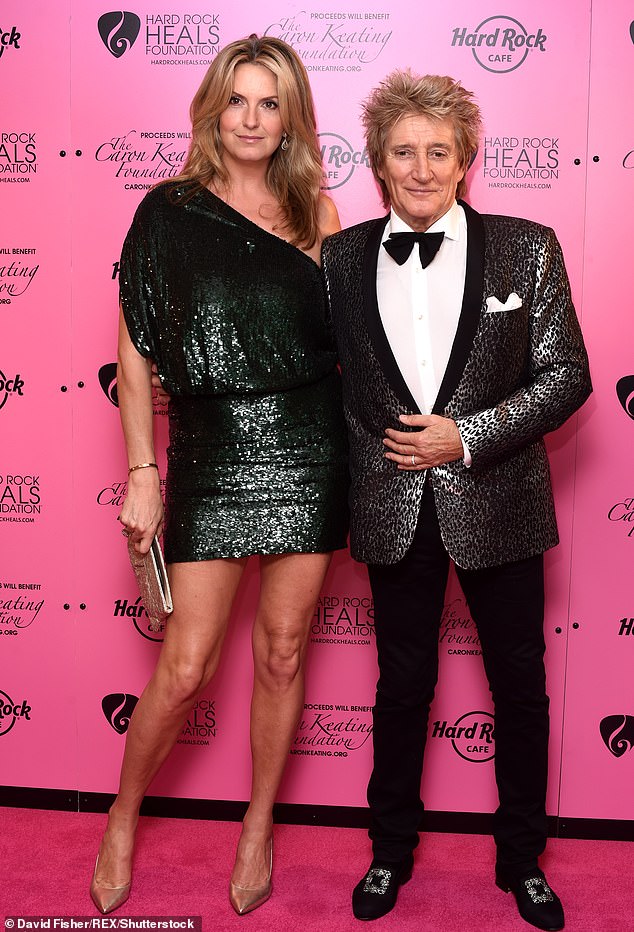 Currently, she is focusing on the British Heart Foundation (BHF) and its launch of a sweepstake to raise money for the charity in which someone will win a £3 million London townhouse. Pictured, Penny with Rod Stewart

Of course Rod and the couple’s sons – Alastair, 15, and Aiden, nine – have voiced concerns for her safety. ‘They have their anxieties,’ she admits.

‘But they know me well enough that when I put my mind to something – if they hear that passion in my voice – that I’ll do it.’

Her training has had an interesting side effect. Sometimes, when she lays down the parental law at home, her boys groan: ‘Oh Mum! You wouldn’t be like this if you weren’t a police officer!’

Currently, Rod, 75, has been shielding at home because his shows have been cancelled until next summer. A survivor of prostate cancer, he had knee-replacement surgery in January and a follow-up operation on his ankle. He will be having the Covid vaccine as soon as he’s eligible.

Penny says: ‘It’s been hard for Rod because he has almost gone into retirement – and retirement is not a word he would ever let cross his lips. He catches up with the band – which he can’t wait to go out on tour with – by Zoom and has been writing a new album. He’s always writing.’ 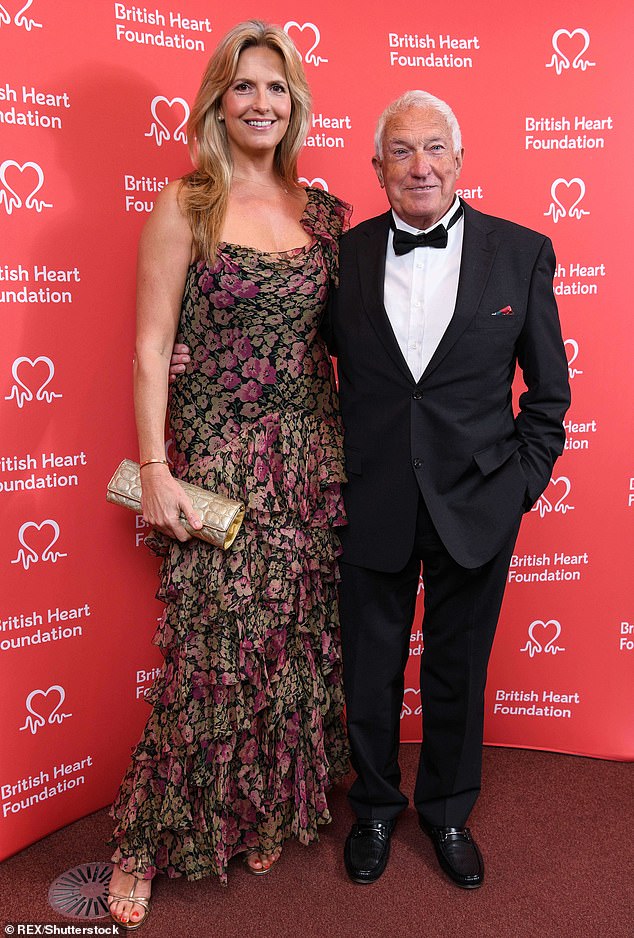 Currently, Rod, 75, has been shielding at home because his shows have been cancelled until next summer. Pictured, Penny and Graham Lancaster at the British Heart Foundation’s Heart Hero Awards last year

The new songs are nostalgic and sentimental – appropriate to the lost pandemic months in which he wrote them. Penny’s favourite is called Touchline, a reflection on family ties.

‘It’s about football but it’s symbolic – it talks about Rod as a young lad and his father watching from the touchline supporting little Roddy in the wind and rain,’ she says. ‘Now Rod has gone full circle. He’s the older dad standing in the wind and rain on the touchline, watching his boys play. Nothing gives him a bigger thrill.’ The Stewart family has a fitness room, which is a shrine to Rod’s beloved Celtic.

It’s densely hung with shirts and scarves in the team’s green and white hoops, and pictures and mementoes of his half-century association with the Glasgow club. (Though judging by the full-size snooker table and the popcorn machine, the space is not used solely for working up a sweat.)

Penny is on her own health-awareness mission to stress the importance of a strong heart and the necessity of cardiovascular exercise. She has raised money for the BHF ever since she was a young girl. She remembers once losing a jar of coins and notes she had collected as the proceeds of a charity swimming gala in a burglary at her childhood home. It’s not the trauma she recalls, but the fury of finding someone had nicked a pot bearing the foundation’s distinctive logo.

Today, she is supporting the BHF’s partnership with Omaze, an American for-profit fundraising company that estimates it has given away £100 million globally, including £4 million in the UK, since being founded in 2012. The British arm of the Los Angeles-based business handed over a £1 million house in Cheshire to a British winner last month after a similar partnership with the Teenager Cancer Trust. Now there’s the £3 million house in London up for grabs in the new sweepstake, with Omaze pledging 80 per cent of the net proceeds to the BHF. The winner won’t have to pay any conveyancing fees or stamp duty and they’ll get a £10,000 settling-in cheque.

Penny says: ‘Whoever gets it can sell it, rent it out or live there in luxury, having helped raise money for the British Heart Foundation. It’s a win-win.’

She has a special reason to be grateful to the charity. Her father Graham, a retired City lawyer, is one of the 1.4 million Britons who has survived a heart attack. (Even before the pandemic, heart disease caused more than a quarter of deaths in the UK, killing someone every three minutes, and sufferers are more vulnerable to Covid-19.)

‘When I got the call, I felt my whole world turn upside down,’ she remembers of her father’s heart attack. ‘Dad was an ox – the protector, the strong one you turned to. He had always taken care of himself, pumping iron.

‘But he still developed heart disease. He had keyhole surgery with the surgeon literally holding his heart – his life – in his hand. Physically, he recovered but psychologically it took longer.’

For Penny, the trauma coincided with the discovery of Rod’s fast-growing prostate cancer.

They kept the 2017 diagnosis secret from their sons and only told them ‘when there was a happy ending.’ As for the impact on Penny herself, she says: ‘I kept positive for Rod, but there were moments of panic. Our tenth wedding anniversary was not just a renewal of our vows – it was us reaffirming our strength as a couple, getting through it together. No one else there that day knew.’

And now? ‘It’s all good. Rod has check-ups every three months, blood tests to monitor his hormone levels. His testosterone, the food for prostate cancer, was suppressed, it shrank the cancer, you can’t detect it at all.’

She’s very proud that he’s open about what he’s been through.

‘Rod was adamant he wanted to be honest,’ reveals Penny.

‘If Rod Stewart, Da Ya Think I’m Sexy, the man on stage with women throwing their underwear at him, can say, “Yes, I was affected by prostate cancer. Yes, I have had the doctor’s finger up my bum, but I can talk about it” then all men should be able to.’

Penny applies the same principle to her own life (‘I’m raw, truthful, transparent’), announcing in the summer that she’d hit the menopause midway through lockdown –at first thinking the hot sweats and scattiness were symptoms of Covid-19. However, she now says: ‘My periods have come back. Apparently I’m not there just yet.’

She offset her hormonal low moods by embracing nature – walking her dogs, Bubbles (a cavapoo) and Lily (a labradoodle rescued from Battersea Dogs & Cats Home), playing with her three pygmy goats and caring for her chickens. She had high hopes for pig-keeping and borrowed a couple to try it out.

‘Ugh no! I found them aggressive, ugly and smelly – not for me. But the goats, I adore them.’

The goats wear collars and Penny hopes they’ll be sufficiently trained to go into the house on Christmas Day to join Rod and the boys.

Like most of the country, she’s eager for New Year and to see 2020 give way to 2021 with the prospect of reunions with friends and family. It will also be the year when she qualifies as a special police officer. Special constables are unpaid volunteers who use their spare time to work as an officer for a minimum of 200 hours a year – two eight-hour shifts a month. They wear the same uniform and have the same powers as regular officers.

Penny has completed the physical tests – you can see her on Instagram overpowering an instructor in a drill – has been issued with her uniform and had her medical.

She describes her husband as the kind of man for whom ‘issues are black and white, one thing or the other’, and herself as the opposite – someone who inhabits the centre ground, ‘thinking of every different scenario and point of view’.

She believes this ability to weigh and counter-weigh – as well as being a mother – will help her enforce the law with a gentle touch. And she clearly can’t wait to get started. ‘Rod’s career takes priority over everything,’ she says. ‘I have never felt like I can give back enough. Out on patrol, I feel as if I can make a difference.’

Indeed, if she is an officer for 20 years as she plans, Rod would be 96 when she retires.

‘He has always seen himself as a pillar of strength,’ she says. ‘He sailed through cancer like it was a cold. Rod lets everyone else do the worrying. Whereas I will eventually retire, Rod never will. He’ll still be alive and kicking footballs.’