Pfizer appears to be far less effective at protecting children aged five to 11 against infection with COVID-19 than it is for adolescents or adults, with experts speculating the Omicron variant or a lower dose of the vaccine could be to blame for its rapidly decreasing protection.

New data collected during the Omicron wave by New York state health officials suggests that while Pfizer strongly prevented severe illness and hospitalisation in children, it offered virtually no protection against infection, even within a month of full immunisation. 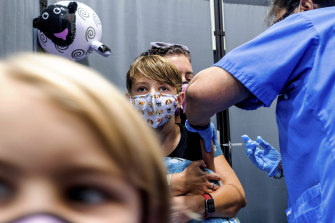 The findings of the not-yet-peer-reviewed and pre-print study, published on Monday, follow preliminary indications from early clinical trials that the vaccine fared poorly in children aged two to four, who received an even smaller dose.

Vaccine effectiveness against infection in the older children decreased to 51 per cent from 66 per cent during the period, while in the younger children, it dropped sharply to just 12 per cent from 68 per cent.

Pfizer effectiveness was also significantly different between ages 11 and 12. The researchers found that at the end of January, the vaccine’s effectiveness against infection was 67 per cent in 12-year-olds, compared with just 11 per cent in 11-year-old children.

Australian infectious disease physicians and paediatricians still strongly recommend the Pfizer vaccine for children, arguing that despite a drop in protection against infection, the vaccine does its most crucial job: providing robust protection against severe disease.

University of Sydney infectious disease paediatrician and expert in vaccinology Robert Booy believed the sharp drop in Pfizer’s performance in young children may stem from the fact they receive one-third the dose given to older children and adults.

He said the biological difference between the two age groups was minimal but the difference in protection against infection was drastic. Children aged 12 received 30 micrograms of the vaccine – the same dose given to adults – while children aged 11 received only 10 micrograms.

“It appears in reducing the dose for a potentially better safety outcome they appear they have lost an immunogenicity protection outcome,” he said. “Using a third of the dose in people who are only a few kilos lighter invariably will have an impact.”

Professor Booy said the findings highlighted the need to gather more information on the best dose for young children and raised further questions on the number and timing of shots given.

But other experts are not convinced a smaller dose is the culprit.

Paul Griffin, director of infectious diseases at Mater Health Services in Brisbane, suspects the drop in efficacy detected by the US researchers could be a factor of the Omicron variant, which can better evade the body’s immune response to a vaccine than its predecessor, Delta.

“What may be different in this case is Omicron, as it mirrors what we saw two doses do across the board with that variant, where protection against milder disease and infection reduced in adults, so perhaps that is what it reflects,” he said.

He added the research was preliminary and more evidence was needed to draw firm conclusions.

New York State Department of Health deputy director for science Eli Rosenberg, who led the study, told The New York Times: “It is disappointing, but not entirely surprising, given this is a vaccine developed in response to an earlier variant.

“It looks very distressing to see this rapid decline, but it’s again all against Omicron.”

However, they stressed that because few children were hospitalised, these estimates had wide margins of error.

“These results highlight the potential need to study alternative vaccine dosing for children and the continued importance of layered protections, including mask wearing, to prevent infection and transmission,” the researchers said.

The data is consistent with a report from Britain showing vaccine effectiveness against symptomatic infection in adolescents aged 12 to 17 drops to 23 per cent after two months.