Bahamas or… Bamburgh? Photos reveal eye-catching BRITISH beaches that can beat anything the Caribbean has to offer

A series of breathtaking pictures of England’s beaches have been shortlisted for this years Best of Britain photo competition – and are giving the Caribbean a run for its money.

Turquoise seas wash over white sand beaches across the UK’s coastline and show Briton’s they do not need to jump on a plane for a swim in the sea.

Cornwall has been given 58 per cent of the vote for the country’s best beaches – with beautiful shots of St Ives harbour and Kynance Cove included. 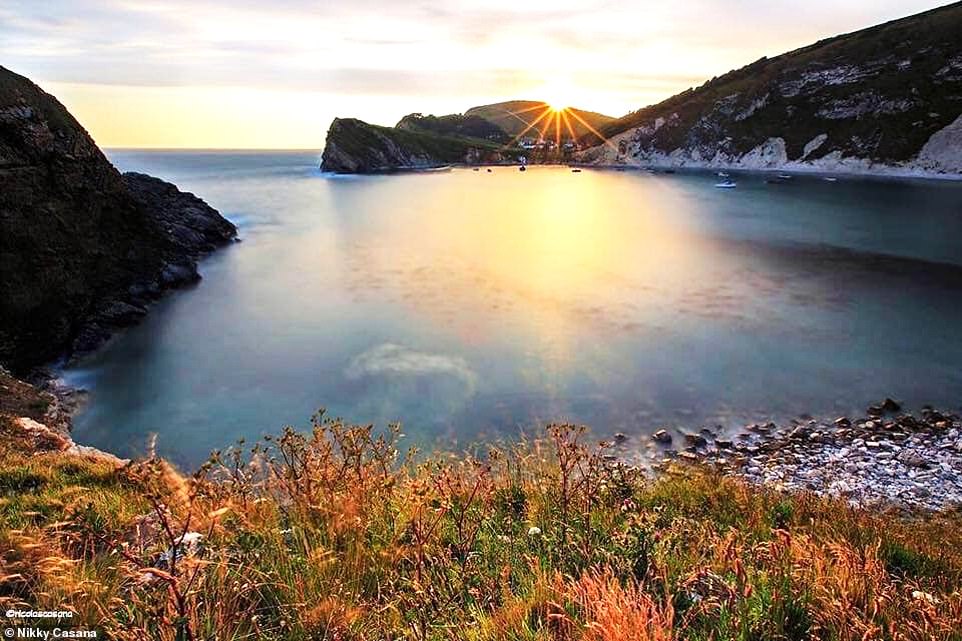 Lulworth Cove in Devon is pictured from the grassy banks as sun pours over the nearby hills and glimmers across the water in this spectacular shot. The horse-shoe cove formed about 10,000 years ago and people can take a boat from here to Durdle Door which has also been featured in Best of Britain 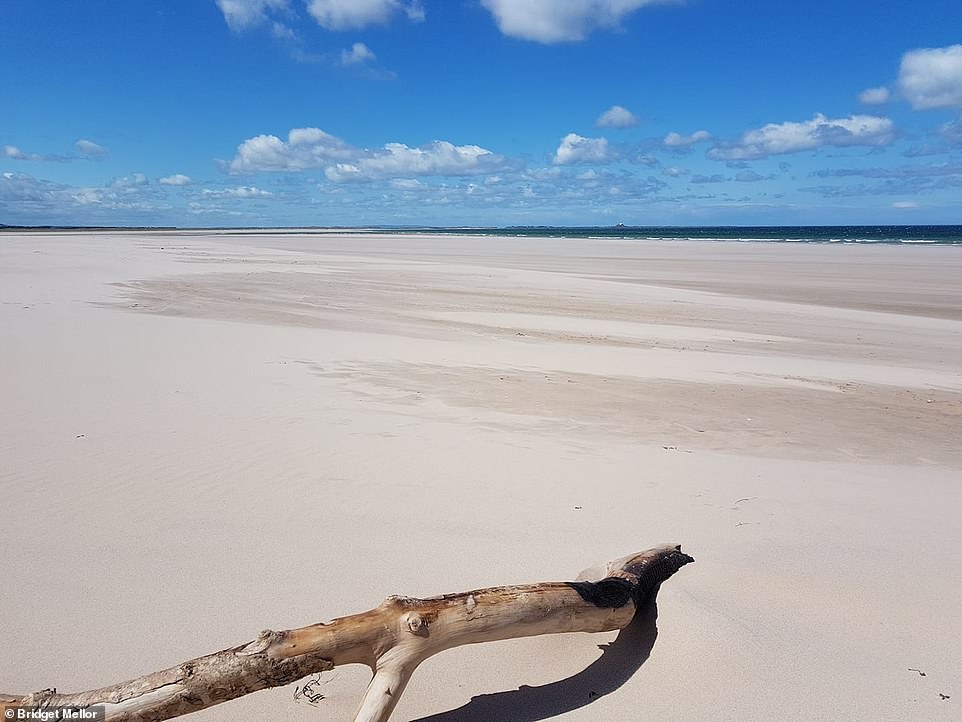 Bamburgh Beach in Northumberland was voted the UK’s overall favourite beach. The photographer Bridget Mellor told CEWE how she loves ‘the big open skies and the abundance of wildflowers, birds and hares’ in the area 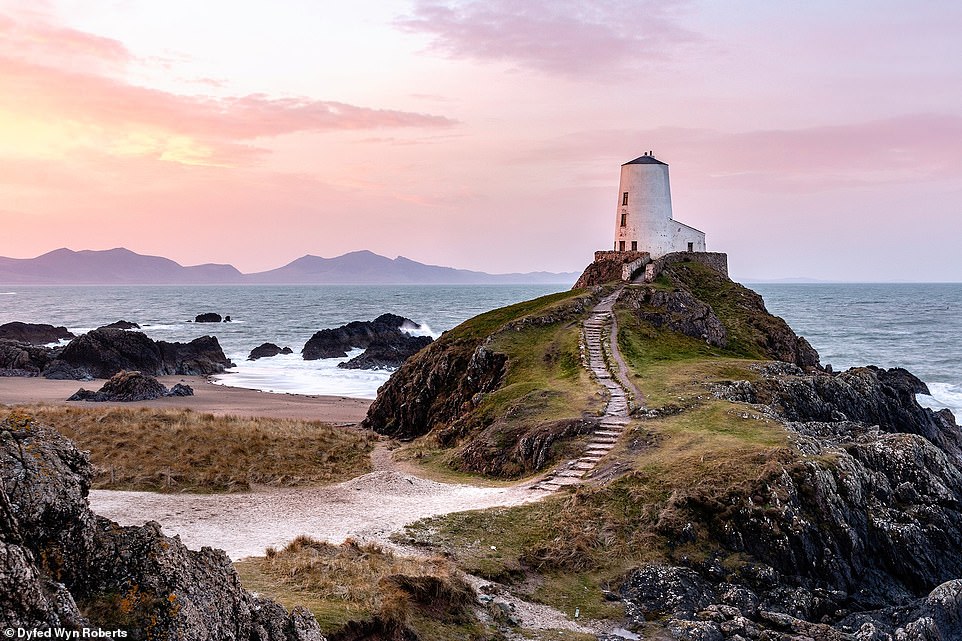 Shepherd’s delight: A rosy-hued colour washes across the rugged landscape and casts a dusty-pink over the Island of Anglesey in Wales in this stunning picture which won the competition 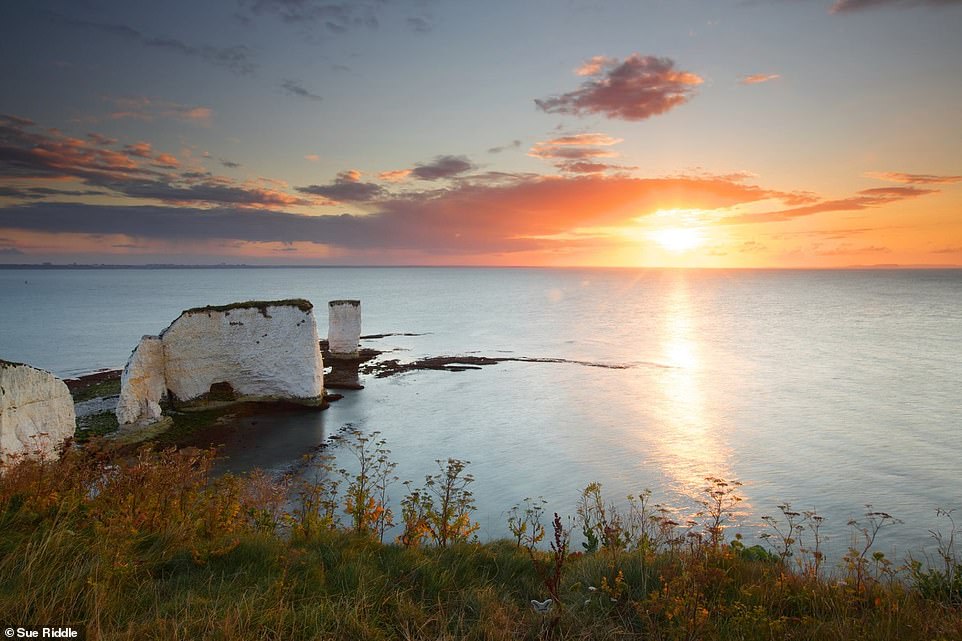 Majestic: The three chalk formations at Old Harry’s Rock in Dorset are sublime in the evening sun which dazzles across gentle sea. These ivory-white mounts used to be part of a long stretch of chalk between Purbeck and the Isle of Wight before erosion 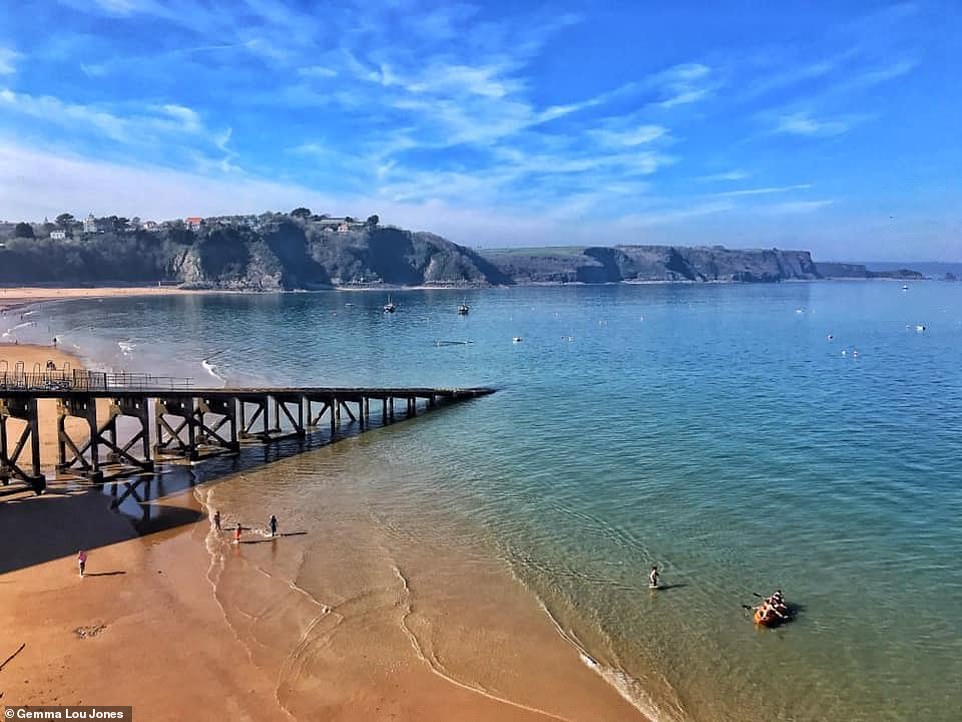 Groups of people take to the water for a canoe or kayak trip on the gentle sea as the lifeboat station is captured jolting out of the water, at Tenby Beach in Pembrokeshire, Wales. The boat is kept within the modern slipway station and ready for any curious children who want to grab a peek 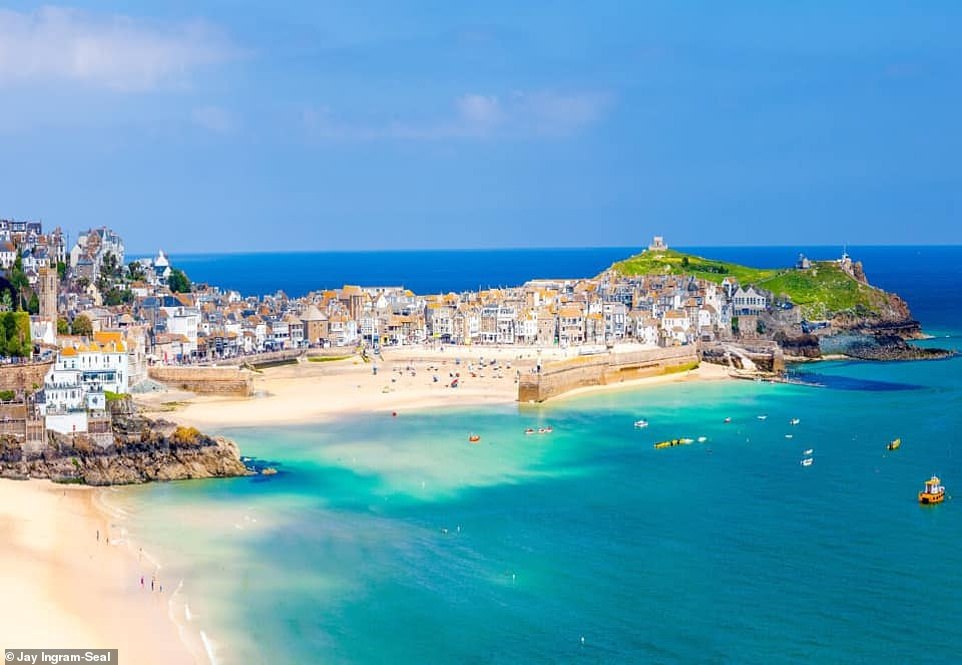 Jay Ingram-Seal shows the gorgeous coast of St Ives in Cornwall which has a coastline that wraps around to Carbis Bay. When the tide is out, holiday-markers can meander their way along to the other beach

Cate Williams captured Kynance on holiday last year and said: ‘[It is] a real gem with a great cafe, part of the beach is submerged as the tide comes in, but is accessible at low tide. The area surrounded is owned by the National Trust. It’s a great place to chill, swim, snorkel or just watch the world go by.’

While Nicky Cassana captured a more romantic shot of Lulworth Cove in Dorset, at sunset with the rays glimmering across the water.

She said: ‘This amazing place allows you to enjoy nature and the environment relaxes your mind and worries. It’s also a good location to stay out of the city. It’s an amazing experience to look at the beautiful scenery when the sun is slowing down. I love the very calm foreground of the cove and changing colours of the grass.’

Devon was given 42 per cent of the 2,000 people who voted for Britain’s best beaches while Dorset received a meager 24.

But the real winner was Dyfed Wyn Roberts for his gorgeous shot of the lighthouse at the Island of Anglesey in south Wales. The rosy-hued colour washes across the sky over the rugged landscape in this stunning picture which won Dyfed £300 worth of vouchers towards a cottage holiday in the UK with a £50 voucher towards creating a photobook with Cewe. He said he was ‘chuffed to bits’ at his fantastic win. 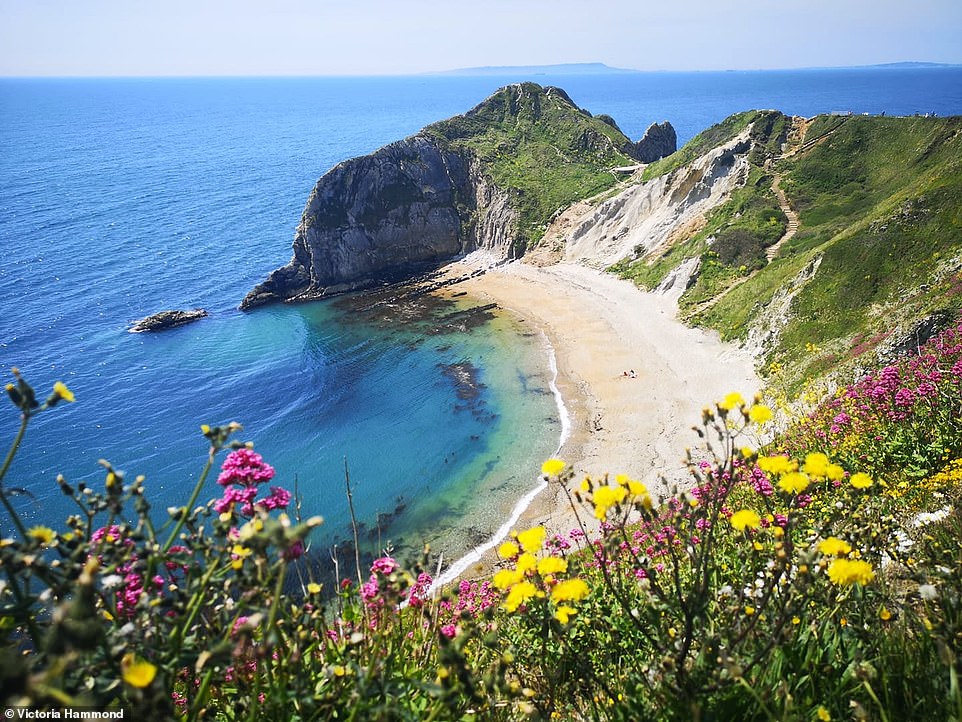 Hidden paradise: The iconic hooked cove of Durdle Door tempts swimmers in the sunlight behind a cluster of golden and magenta pink wild flowers. Dorset’s coast is one of the richest parts of Britain and Ireland for plants with more than 800 species recorded Seabird’s haven: The jagged Bempton Cliffs in Yorkshire have also been given recognition in the competition and are popular with local wildlife – attracting nearly one million seabirds every year 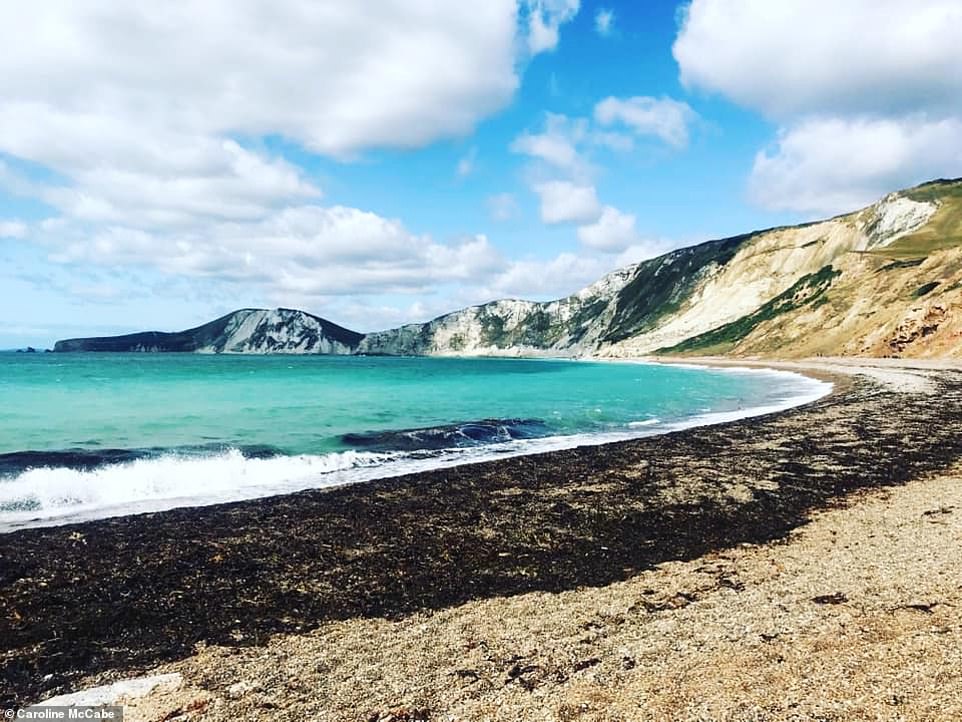 Worbarrow Bay is nestled along the Jurassic Coast in Dorset and is designated by UNESCO as England’s only natural World Heritage Site. Here the luminous blue waves swallow up the beach which lies below the chalk cliffs

The UK is ‘spoilt for choice when it comes to beauty spots’, according to Clare Moreton, Digital Marketing Director at CEWE.

This means the Bahamas could be traded in for the Yorkshire coast with a barren strip of Filey Beach snapped up in a mesmerising shot. The beach stretches five miles with a Sculpture Trail and beach chalets – with a rugged landscape providing an alternative to the leafy palms in the Caribbean. 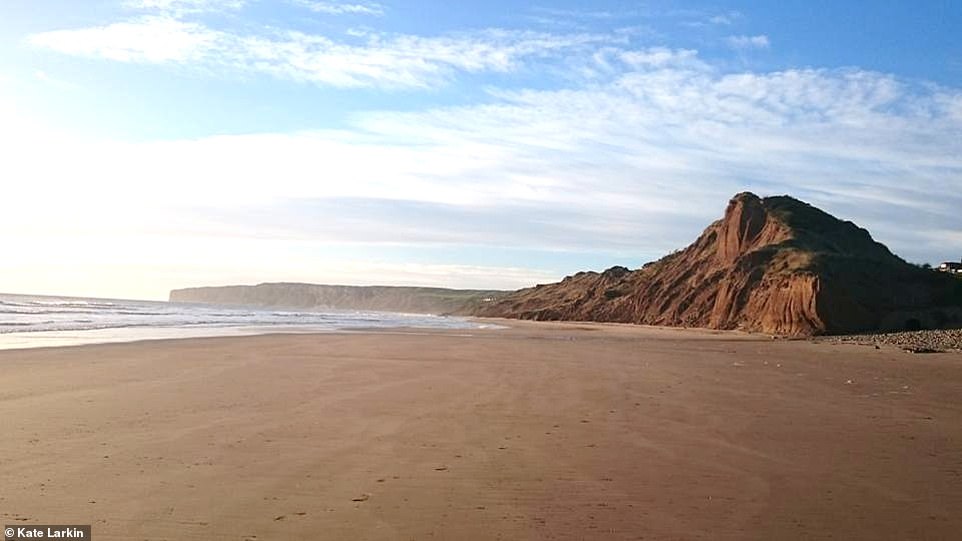 Breathtaking: Filey Beach in Yorkshire is captivating and a regular spot for beach-goers in the summer as it stretches five miles with a Sculpture Trail and beach chalets 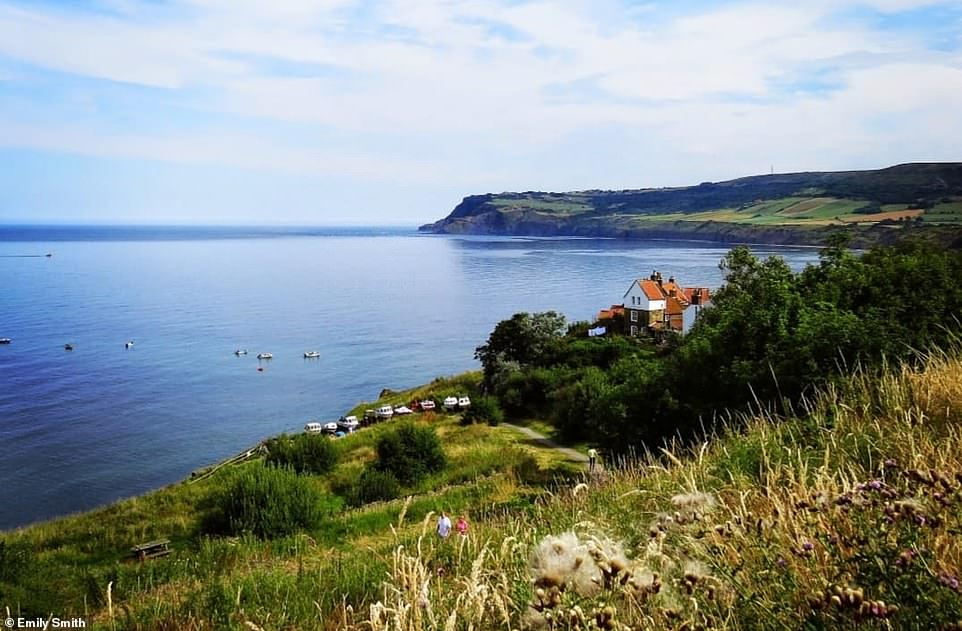 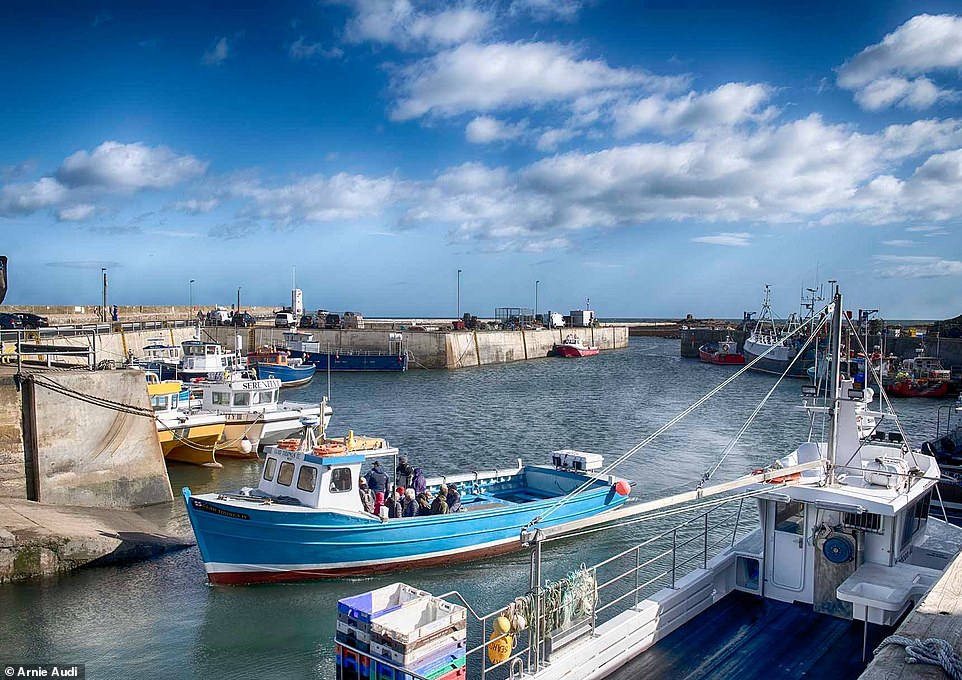 A baby-blue fishing boat approaches the harbour-side in Seahouses, Northumberland, after tourists are taken on a trip to the Farne Islands 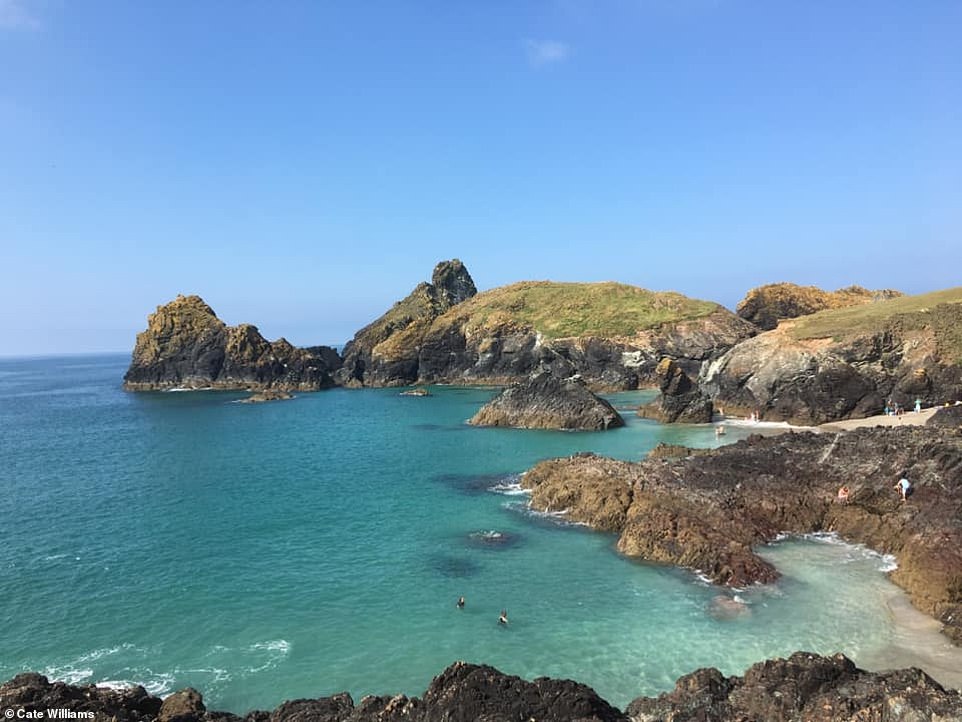 ‘A real gem’: Kynance Cove is also a favourite spot in the county and is a ‘great place to chill, swim, snorkel or just watch the world go by’ according to the photographer Cate Williams. The TV series Poldark was filmed here and has pulled in more visitors 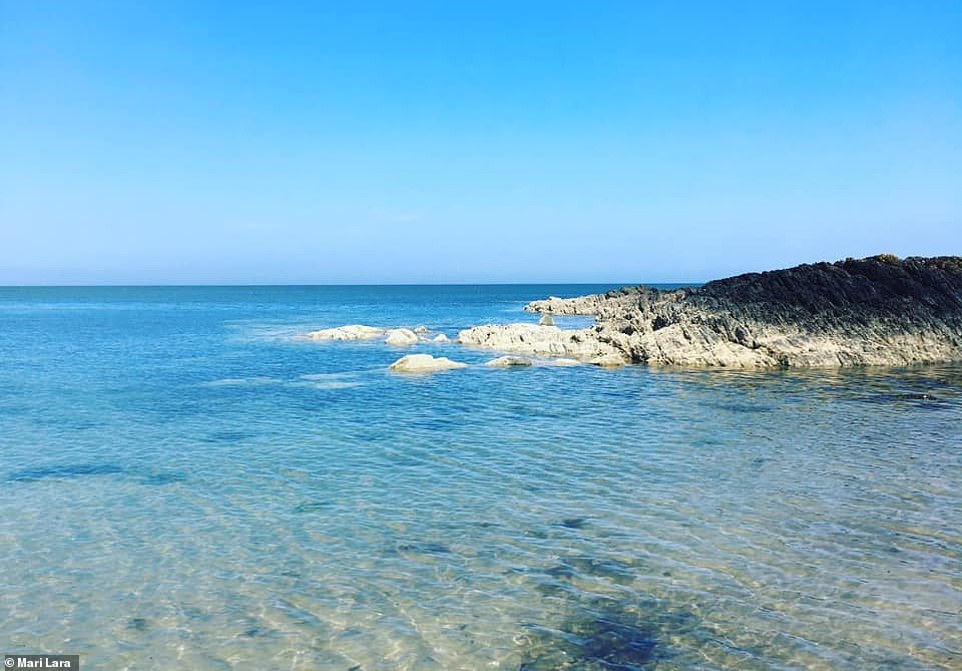 Helen’s Bay in Northern Ireland is a popular spot with crystal clear seas and is overlooked by the Crawfordsburn Country Park. Holiday-makers should look out for Eider Ducks and terns in the summer – and some may even see Porpoises and seals