David Wilcken, who has died at the age of 93, was a pioneering cardiologist who was able to combine groundbreaking research with the meticulous and compassionate clinical care of his patients. Among his many professional achievements, Wilcken spearheaded the use of ultrasound in Australian cardiology.

David Emil Leon Wilcken was born in Sydney and initially grew up in Vaucluse. When his mother contracted tuberculosis, the family moved to the then rural district of West Pennant Hills, on the medical advice of the time, which was that TB patients benefited from the country air.

Wilcken had to get up early to milk the cow before he and his brother rode their horses to school, let them out in a field, and later caught them, sometimes with difficulty, to ride back again. At school, Wilcken was a keen athlete and a state champion hurdler – but he also did well academically, going on to study medicine at Sydney University.

To get specialist medical training in those days, it was usual to do post-graduate study in Britain or the United States. Wilcken spent a year in the Northern Territory, in part with the Flying Doctors, to earn the money to go to London in 1956 for further study at the Hammersmith Hospital. But his trip was interrupted by the Suez crisis, and the small vessel on which he was the ship’s doctor had to turn back at the canal and go the long way round, via Cape Town. Because of this he missed the course he was about to take in London – a lucky accident, because on the following course, he met his wife Bridget, a young trainee doctor from Leicester.

After their first date at a picturesque pub by the Thames, things moved at speed and they married months later. The newlyweds set off for San Francisco, where Wilcken studied cardiology with Julius Comroe at the renowned Cardiovascular Research Institute.

After that, the plan had been to return to London to spend a year with the equally renowned Paul Wood, but this was scotched by Wood’s sudden and untimely death. Wilcken returned to Sydney as a senior research fellow at the University of NSW and a physician at Prince Henry Hospital in southeast Sydney. There, he was a well-loved clinician with a genuine interest in everyone he worked with, whether they were patients, colleagues, students, sonographers, nurses or the tea lady who used to bring tea and scones to start his unforgettable ward rounds at Prince Henry.

Wilcken’s wide-ranging research career led to the publication of more than 200 articles, mostly in leading medical journals. His initial research was on aspects of cardiac physiology, working mainly with dogs, but he also became involved in the development of ultrasonography in cardiology.

He worked with George Kossoff and Michael Dadd from the National Acoustic Laboratories on the very early development of echocardiography in Australia. Echocardiography, which uses ultrasound to generate images of the heart, is now an essential part of routine cardiac assessment. It allowed Wilcken to visualise an abnormality of a heart valve, known as mitral valve prolapse, on which he became one of the world’s leading experts. 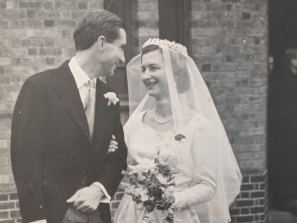 David Wilcken and his bride Bridget.

Wilcken was fascinated with the causes of heart disease, and this interest led in several directions. He investigated a number of different biological markers for disease and was the first to show that levels of the protein ApoB predicted high cholesterol in later life. This discovery allowed for the development of a cheap population screening test in newborns for the condition known as hypercholesterolaemia.

He retired from the university and from the Prince of Wales public hospital in 1992, but responded to a plea to come back in 1993 for a few more clinics, as so many of his patients wanted to see him for a last time. He continued to see some patients privately, charging them the Medicare rebate only – he had spent his career in public teaching hospitals and was something of a sceptic when it came to private medicine. 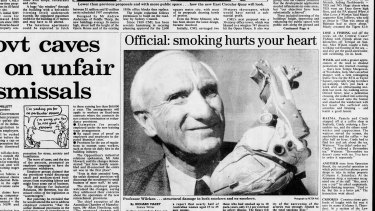 The Herald front page from 1994 featuring Wilcken and his finding about the link between smoking and heart disease.Credit:Fairfax

And he continued to undertake research, with one project landing him on the front page of the Herald in 1994. This was for work that for the first time confirmed the link between smoking and the diseased arteries which lead to heart failure. Wilcken was in the media again in 2000, when he sat down with Dr Norman Swan at the ABC to sound the alarm about weight gain in Australian children. He retired completely at the end of 2009.

In to bat: Wilcken loved to play and watch cricket.

His interests in life were far from just professional. Wilcken had an abiding love of classical music and was a regular attendee at the Sydney Opera House. He had been a keen cricketer in his youth and loved to watch the test cricket over the long summer holidays.

He swam in Sydney Harbour most days, regardless of the season. But above his achievements and interests was his enduring love for his wife and four sons, the eldest of whom followed him into medicine. He always felt he had been extremely fortunate to have been able to spend his working life doing something which he loved, while at the same time enjoying a loving and happy family.

Wilcken died peacefully on July 25, after a long illness. He is survived by his wife Bridget, sons Nicholas, Jonathan, Hugo and Patrick and seven grandchildren.