A pharmacist faces life in jail for strangling his wife to death so he could cash in on her life insurance and start a new life with his gay lover in Australia.

Mitesh Patel, of Middlesbrough, hoped to make £2million from his wife’s death and use her frozen embryos to have the family with Dr Amit Patel, who had emigrated to Sydney.

Mitesh tried to pass off his wife’s murder as a botched burglary of their home, which is not far from the pharmacy they ran together.

But his lies were undone when investigators examined his movements using the iPhone Health App, which both he and his wife used, in a legal first for the UK. 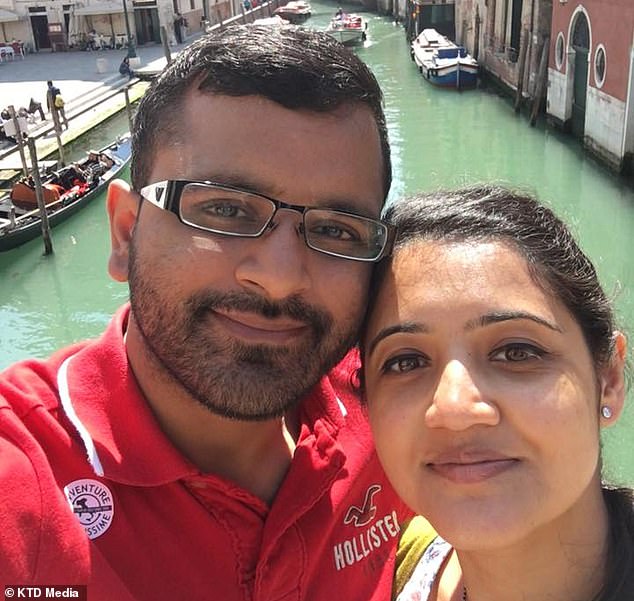 Mitesh Patel, 37, denies strangling his wife Jessica, 34, at their home in Middlesbrough 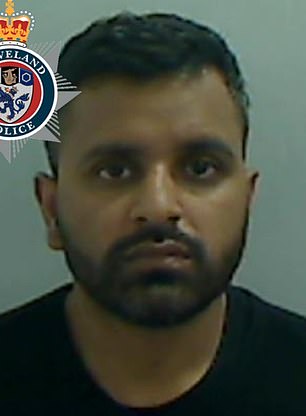 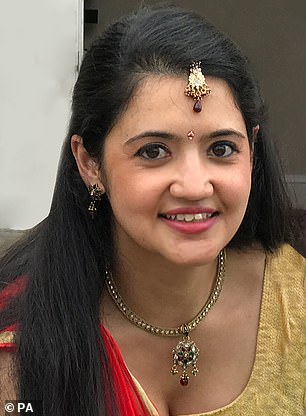 The app tracks a person’s steps throughout the day and it disproved Patel’s lie that Jess was murdered by an intruder.

In the minutes that followed her death Patel’s phone monitored frantic activity, racing around the house as he staged the burglary, running and up and down the stairs, while hers stayed still.

Only after her death, her phone moved exactly 14 paces as her husband took it from her body and deposited outside to make it look as though the ‘burglar’ had dropped it as he left.

Jessica, 34, had suffered in silence for six years, aware that her husband was in love with another man and was also having casual sex with strangers he met on the Grindr dating app. 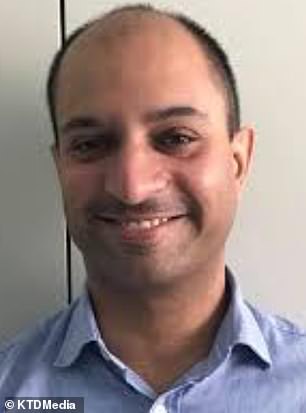 There were cries of ‘yes!’ from the public gallery as Patel was found guilty today. Mr Justice James Goss told him he faces a life sentence and will only be released ‘in many years to come’.

Patel had also made a series of internet searches before her death, including ‘I need to kill my wife’ before strangling her with his bare hands and a Tesco plastic bag on May 14 this year..

His motivation had always been to escape his strict Hindu upbringing and flee to Australia to be with Amit Patel and for the couple to bring up a family.

Even while he and his wife were going through three unsuccessful rounds of IVF, he was planning to kill her and take the baby to Sydney, asking Amit Patel: ‘Would you love it like your own?’

The fourth IVF cycle had resulted in Jessica’s embryos being harvested and held in frozen storage in a fertility clinic in Darlington.

With access to the embryos Patel had no more use for her, prosecutor Nicholas Camopbell, QC, told the court and he brought forward his plan to murder her. 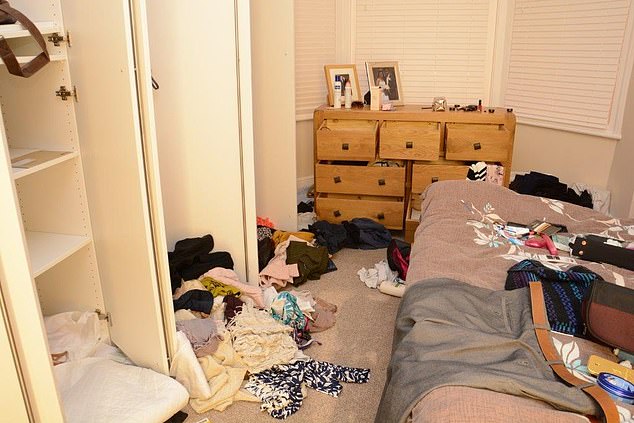 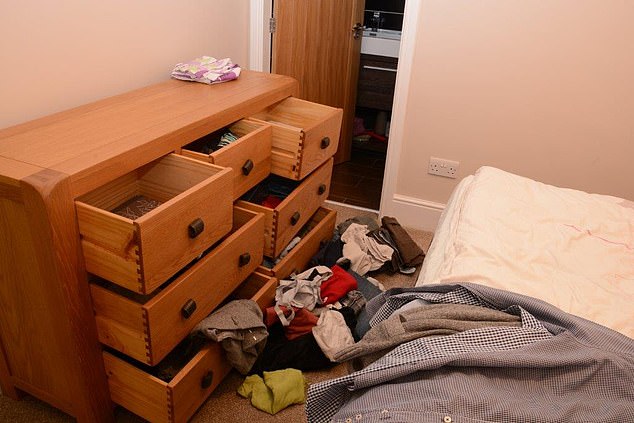 He was snared after police discovered a step-counting app on their phones showed him frantically running around before calling 999, while her phone stayed still

Teesside Crown Court was read messages between Mitesh Patel and his wife which showed she was resisting continuing with IVF because she knew he was having sex with other men.

In some cases he was bringing them back to their home and having sex in their spare room, using lubricant and condoms he kept in the marital bedroom.

He also invited Amit Patel to the couple’s previous home in West Yorkshire, leaving his wife in the middle of the night to be with his lover in the guest room.

Patel’s Google searches also helped to give him away. In the weeks leading up to the murder he searched: ‘Can 3mm of insulin kill?’, ‘How to complete a coroner’s report,’ and ‘Hindu funerals for a murdered woman’ and was looking at properties for sale and rent in Australia.

During the course of the trial Patel admitted: ‘I should have been honest with myself and I should not have married Jess.’

He added: ‘I cannot explain how I felt. It was the fear of being exposed as an Asian gay man, that was one thing and the other was that I was not going to let Jess down. I had married Jess and all her dreams were going to come to a crashing end.’ 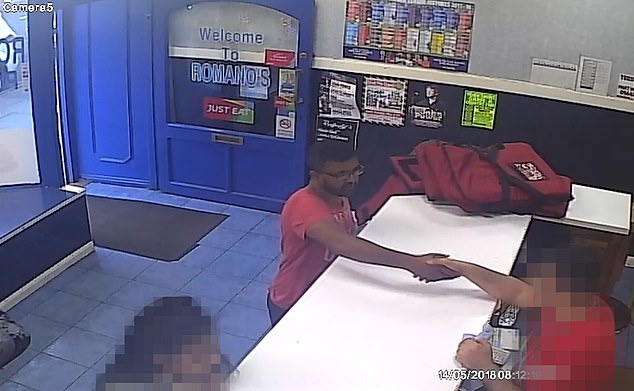 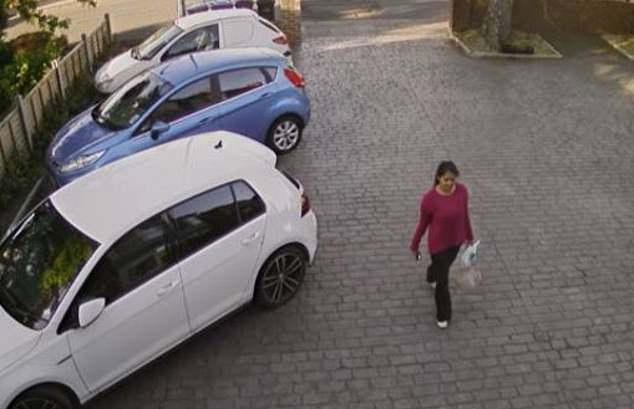 The victim was pictured, in her final moments, returning home, before her husband killed her

Cleveland police say that Dr Amit Patel, a GP who worked at a health centre, has only been spoken to as a witness, although the enquiry into all the circumstances leading up to Jessica’s murder is ongoing and does not end with her husband’s conviction.

DCI Matt Murphy-King, who led the investigation said: ‘we have spoken to Amit as a witness. It would not be proper for me to go into any detail it could unduly prejudice any future proceedings should there ever be taken against him.’

Mr Justice Goss told the jury a life sentence was mandatory and he will determine the minimum term Patel must serve behind bars on Wednesday morning.

He will hear victim statements from Jessica’s grandmother, father and a joint one by her siblings and cousins before he sentences.

The jury unanimously found Patel guilty after deliberating for around three hours on the 12th day of the trial. 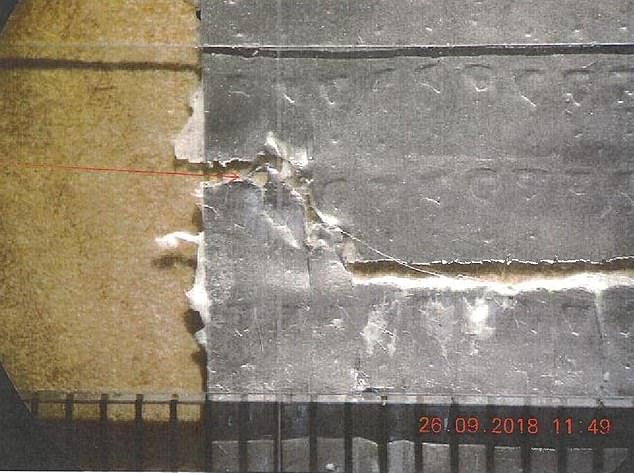 He wrapped duct tape around her mouth, which he claimed burglars had used to silence her

The health app that snared the pharmacist: Detectives used steps to show he staged burglary

The killer pharmacist’s iPhone health app helped convict him in what was thought to be a legal first in the UK.

After his arrest, police seized Mitesh Patel’s handset and downloaded critical information about his movements, including when the phone moved and where.

The health app uses motion processors in the phone to monitor a user’s steps and when the handset is taken up a flight of stairs, and that evidence was used in court to show the killer’s frantic movements around his home, going upstairs to ransack rooms to stage a break-in after he had strangled his wife in the living room.

It also showed that after he returned from a trip out to buy food that night, he had gone upstairs after he pretended to find his wife’s stricken body, dashing into a bedroom to hide the house’s CCTV hard-drive in a suitcase full of clothes.

Research of Jessica Patel’s health app showed the handset moved 14 steps at 7.44pm – the exact time Mitesh Patel left her lifeless body and fled the house to create an alibi.

He claimed his wife was still alive when he ventured out, but his story crumbled when the health app showed her phone remained motionless outside the couple’s Middlesbrough home until 8.40pm that night.

That was when a police officer picked it up near their front door, where it had been left by Patel, 37, to make it look like it had been dumped by an intruder.

A legal source said it was thought to have been the first use of such in-depth iPhone health app analysis in a major UK trial.

‘All she ever wanted was to fall in love’: Family’s heartbreaking statement about betrayed wife 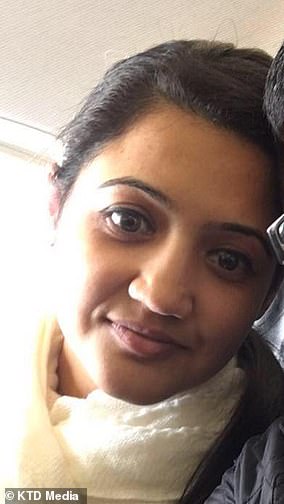 Following Patel’s conviction today, the victim’s family said: ‘Jessica was a beautiful person both on the inside and out.

‘Her soul was pure, her heart ever so kind and the love and generosity she afforded to everyone in her life was second to none.

‘She had simple dreams, all she ever wanted was to fall in love, have a family of her own and live happily ever after.

‘Losing Jessica has devastated our family. Over the last 6 months we have agonised over what could have happened and the truth we have learnt over the last few weeks is truly painful and traumatic.

‘Never could we have ever imagined anything like this. The man we welcomed into our family, who promised to look after and protect her, betrayed her in every sense of the word, cheating her of her dreams, robbing her of her life and robbing us of her.

‘No one in this world has the right to take someone else’s life. Although even a maximum life sentence is not punishment enough, we are relieved at the outcome of the trial and this will help to bring us a little peace.

‘We would like to thank everyone associated with this case who have worked tirelessly in aiding our fight to get justice for Jessica.

‘All we really want is to have Jessica back in our lives; something we will never get but we hope now she is finally at peace.’