This is the first picture of a mother-of-two who won a dream £3million mansion in a raffle – only to be told she wasn’t getting it because ‘too few tickets were sold’.

Carina Alcock, from Christchurch, Dorset, thought she’d won the riverfront mega-home, near Ringwood in Hampshire, in a raffle put on by millionaire couple Mark and Sharon Beresford. 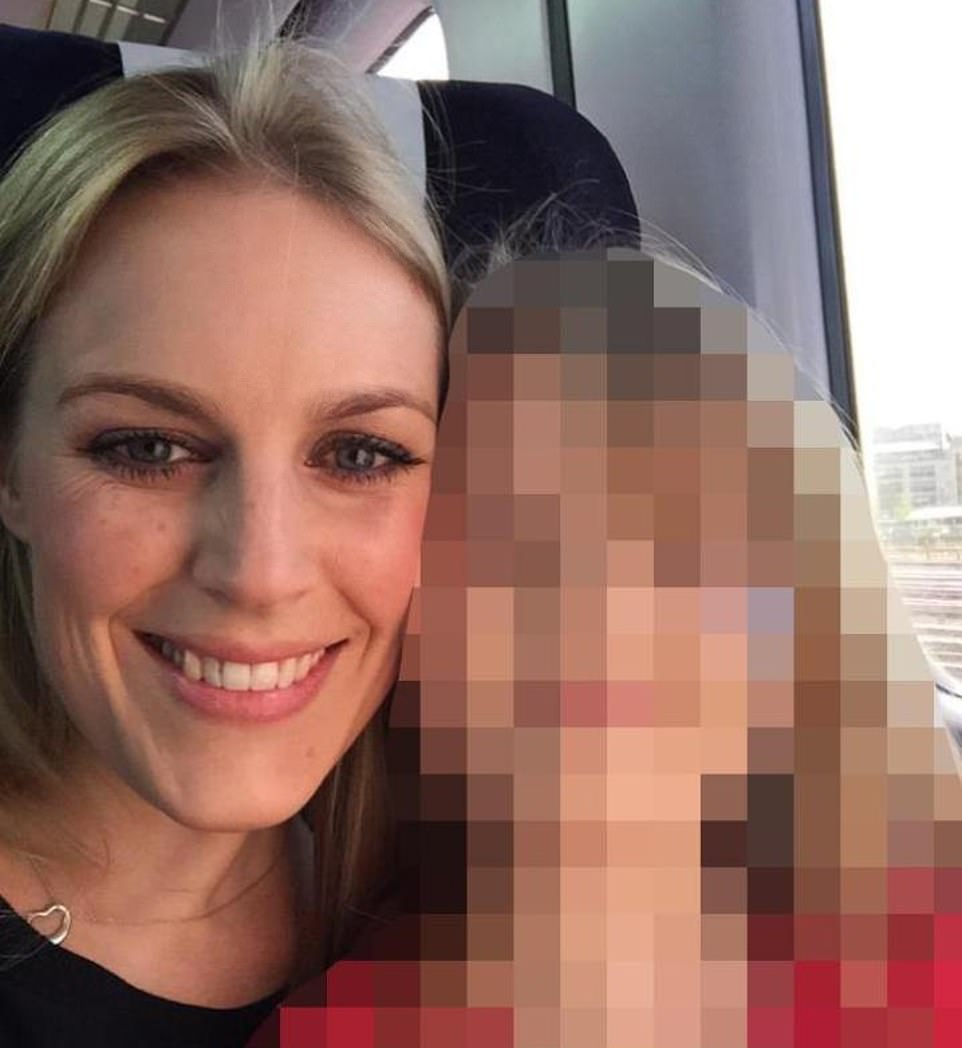 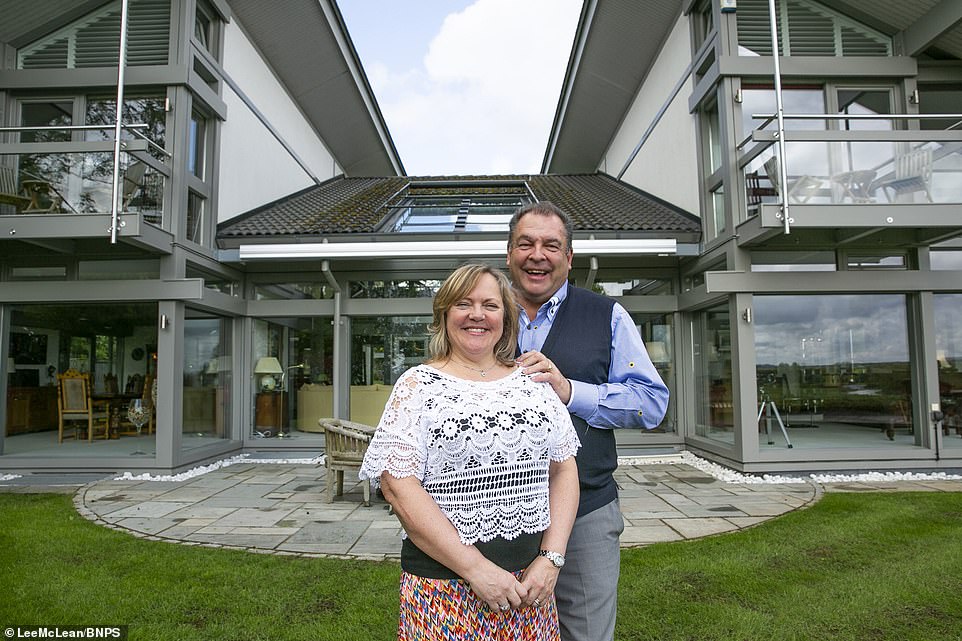 Mark and Sharon Beresford (in front of the property) failed to sell enough £25 tickets to make the house giveaway viable but still raised £750,000 – and pocketed up to £640,000 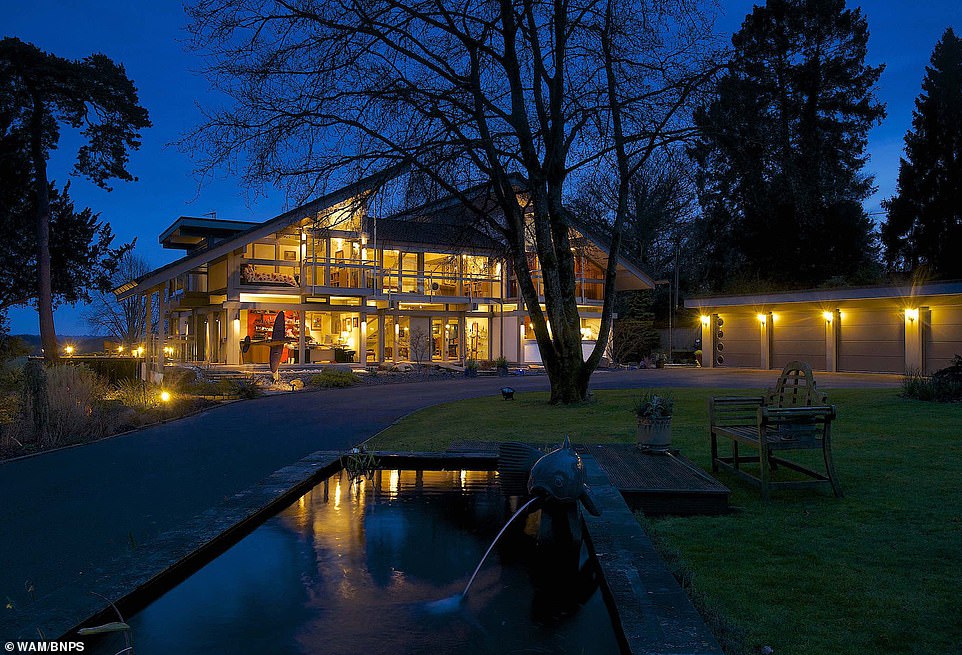 The house in Ringwood, Hampshire, is a Huf Haus, meaning it is a distinctive glass and wood property built by the German company of the same name, which can be constructed within days. The couple will keep the house now but are still trying to sell it with a view to moving to East Sussex to be closer to family

The couple claimed the had to slash the prize fund because they spent the rest on  ‘running’ and ‘promotional costs’.

They say they’ve made ‘just above minimum wage’ from the competition since launching it last year.

Ms Alcock was announced as the winner in posts on the competition’s social media pages – but they were suddenly taken down shortly after. Ms Alcock declined to comment.

Contestants were promised they would win the six-bedded Hampshire mansion if they sold 250,000 tickets at £25 each. 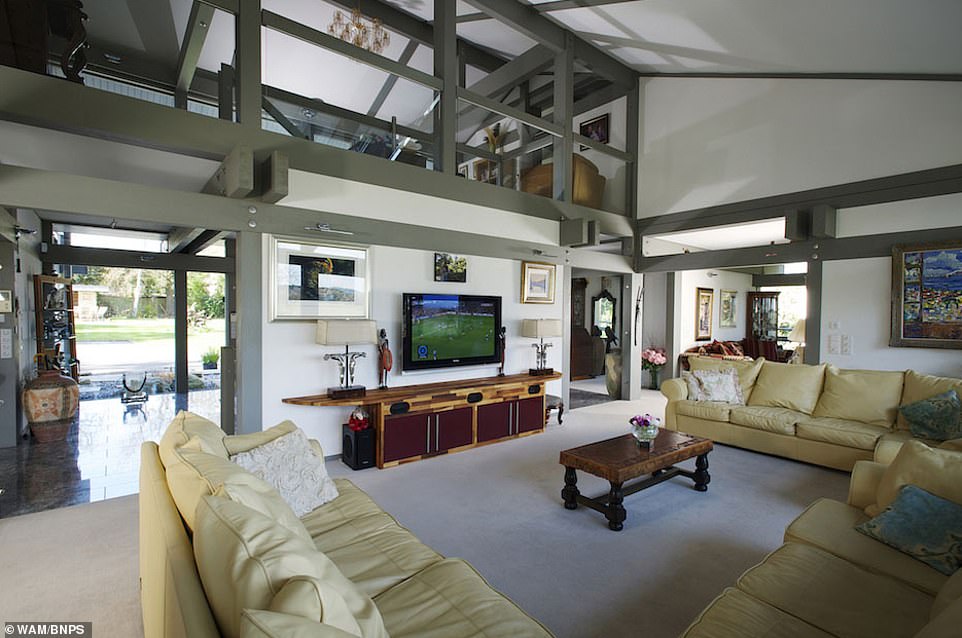 The stunning six-bedroom property has a large sofa in the main living area on the ground floor, with open plan rooms providing a sense of space 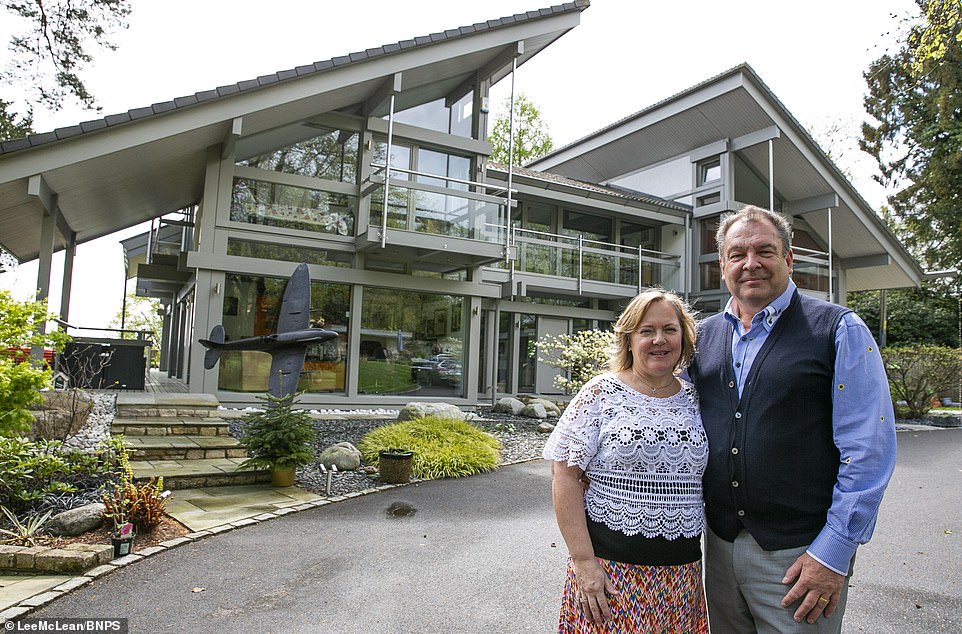 The couple, pictured outside the luxury home, have dismissed criticism against them and said the raffle was followed according to laws and regulations

What are the rules on raffling a home – and what happens if they don’t sell enough tickets?

What is a house raffle and how is it legal?

Raffling off a home is becoming more and more popular with dozens taking place every year in the UK.

For the seller, the idea is to sell enough raffle tickets to cover their asking price – plus cover the cost of running it.

Most set up a website to advertise their competition and charge between £2 and £5 a ticket in order to attract as many entrants as possible – but more expensive properties can be raffled at £25 a ticket.

Once they hit their target total, they then select a lucky winner at random – but the draw must be carried out by a regulated lotto firm not the owner.

Those who want to keep the money gained for themselves must either hold a free prize draw or add a competition element to the raffle.

Competitors should have to prove their skill, knowledge or judgment in order to win the top prize.

Many people get around this by asking an incredibly simple question such as ‘what style of property is this house: A – Victorian, B – Tudor or C – Georgian’ when people pay for their raffle ticket.

Others have run spot the ball games to decide the winner.

How often do house raffles fail?

More and more raffles are failing to hit ticket targets as people become suspicious of them.

In this case the organisers will fall back on their terms and conditions.

These usually allow them to keep 25 per cent of total sales to cover their time.

They can also deduct further reasonable running costs such as legal or PR spending.

The remaining money is then given away – but it is always smaller than the value of the home that was up for sale.

In their terms and conditions, the Beresfords stated that in these circumstances the first prize would be cash to the value of 75 per cent of the final ticket sales – but only after their promotion costs were taken out.

The couple maintain they racked up around £450,000 in advertising, marketing, PR and legal bills and were also entitled to keep up to 25 per cent of the ticket sales – about £187,000

The remaining £110,000 from the £750,000 pot was won by Carina Alcock from nearby Christchurch, whose ticket was drawn two days ago, she refused to comment on her victory.

In the face of criticism, Mr Beresford, a 61-year-old company director who made his money turning around failing businesses, defended the veracity of the draw and the costs they racked up.

He said yesterday: ‘If we charged our time on an hourly rate we would be a little bit above minimum wage’ and threatened to call the police if the reporter did not leave.

Mr Beresford set up the company Win A Mega Home Ltd as a platform to stage the house raffle.

The company is legally obliged to file its costings for the competition with Companies House in the near future.

The Gambling Commission said they could not comment on the case today. It does have the power to levy a fine of up to £5,000 and up to a year in jail for the raffle organiser.

Mr Beresford said in the statement: ‘We made sure everything was legal and above board and satisfied the Gambling Commission.

‘Of course we’re disappointed that the house hasn’t been won as we want to move to Sussex to be near family.

‘When we called the winner, they were overcome and we’re so happy for them and can’t wait to present them with the money.’

The draw was made by a random number selector computer at Sterling Lottery Management, which is approved and audited by the Gambling Commission.

It selected 100 tickets and local MP Christopher Chope drew the winner from that number.

An independent solicitor was also present at the time to oversee the procedure.

The Beresfords decided to launch the raffle after several offers for their Huf Haus-style home called Avon Place home fell through. 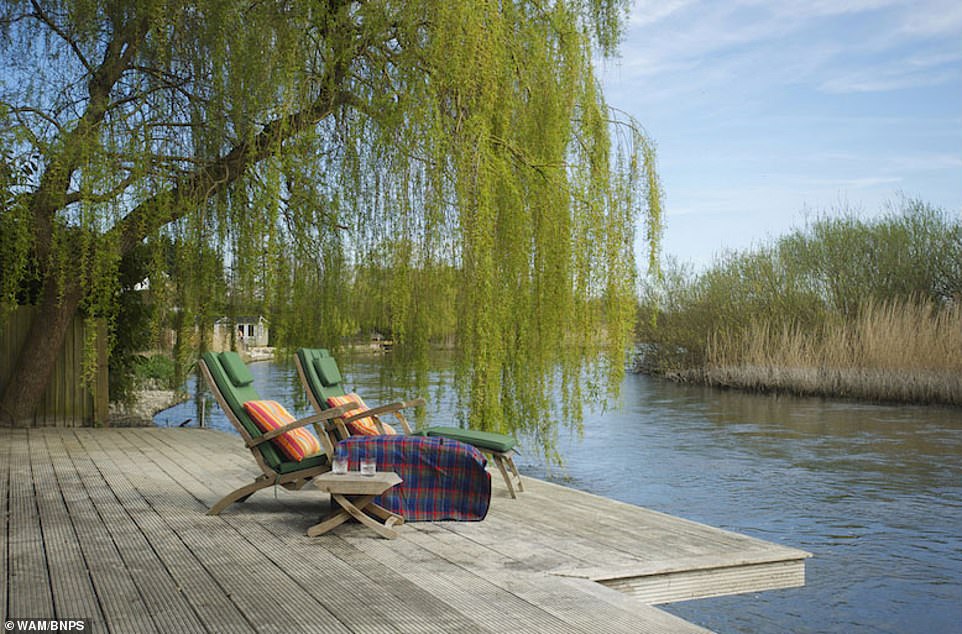 The Beresfords property, Avon Place, is set in around an acre of private grounds and offers 7,000 sq ft of open plan living with views over the River Avon (pictured) and Avon Valley

The couple had even received interest from an England international footballer but had been unable to find a buyer.

The couple still intend to sell the home as they are planning to move to East Sussex to be nearer their family after their three grown-up children moved out.

However, they will now do so through more conventional means by listing it on the market.

Despite being unable to sell their home through the raffle, the couple said they don’t regret their decision. 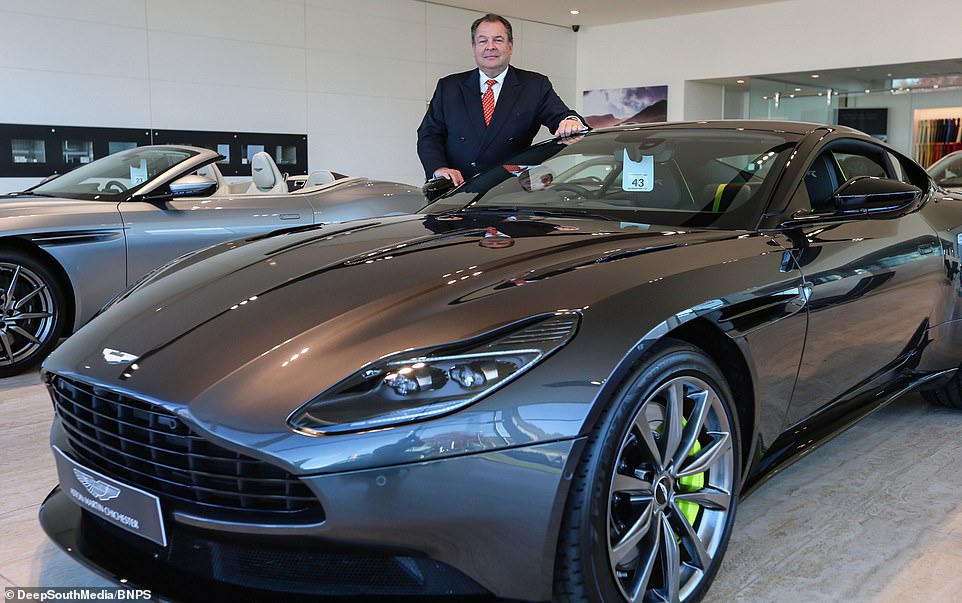 They also denied any wrongdoing and said they had complied with both competition rules and relevant laws.

‘We calculated the prize exactly as described in the terms and conditions, which all entrants had to accept.

‘We have spent huge sums of money on advertising that failed to cover its costs.

‘The costs incurred were very high and began in 2016 with extensive legal advice and opinions about the interpretation of the rules covering prize draw competitions.

‘By the time the competition was launched, costs were already into six figures – to do this properly is neither cheap nor for the faint of heart. 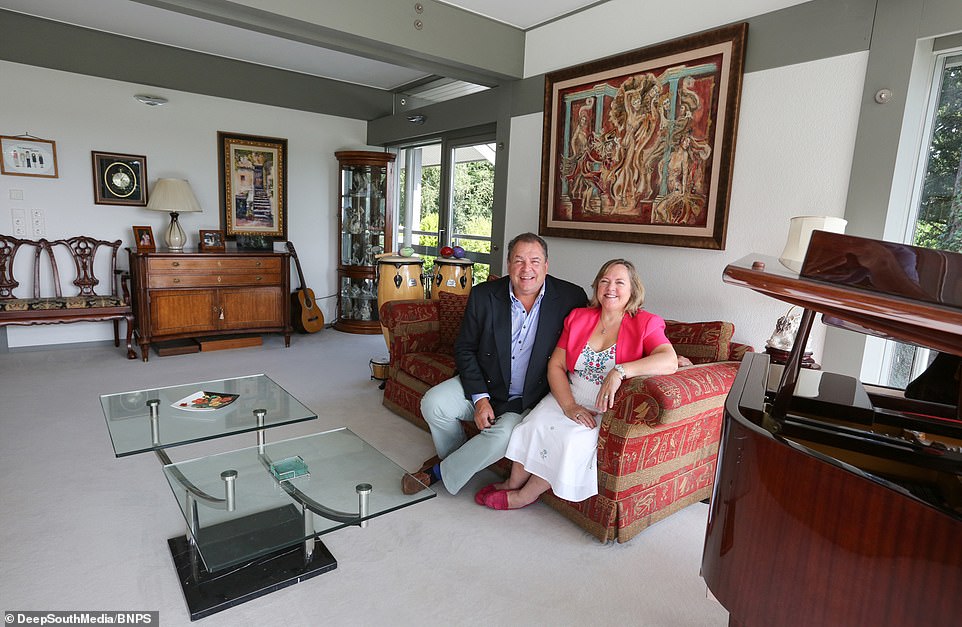 Mr Beresford, pictured with his wife in one of the property’s many sitting rooms, said: ‘Of course it’s disappointing not to be handing over the house to the winner, but we gave it our best shot’

‘We will file our accounts in line with statutory requirements.’

She said: ‘From a buyers perspective it is not hard go see the appeal. Imagine bagging yourself a brand new home in return for just a few pounds spent on a raffle ticket.

‘From a sellers’ perspective it is an opportunity to get a bit more money out of the sale than had they put the property on the market.

‘But the number of failed house raffles far exceeds the number of successes and that is often because they don’t sell enough tickets.

‘If you have entered a raffle that is later withdrawn then you should get your money back.

‘The Gambling Commission already takes action against any listings that it thinks are in breach of its rules.

‘But there is certainly a case to be made for additional scrutiny and earlier intervention to prevent potentially unscrupulous listings going live in the first place.’