Boris Johnson will tell public to ‘stay alert, control the virus and save lives’ as government drops ‘stay at home’ message in battle against coronavirus

Boris Johnson will tell the British public to ‘stay alert, control the virus and save lives’ as the government drops the ‘stay at home’ message in the next phase of the war against coronavirus.

The PM is expected to drop the slogan ‘stay at home, protect the NHS, save lives’ in a televised address to the UK tomorrow at 7pm in an effort to reopen parts of the economy.

A five-tier warning system, administered by a Joint Biosecurity Centre, will be used to monitor the virus risk around the country and encourage public adherence to the new measures.

The alerts will range from Level One (green) to Level Five (red), with Britain currently on Level Four.

It will be administered by a Joint Biosecurity Centre, which will be responsible for detecting local spikes of Covid-19 so ministers can increase restrictions where necessary to help reduce the infection rates. 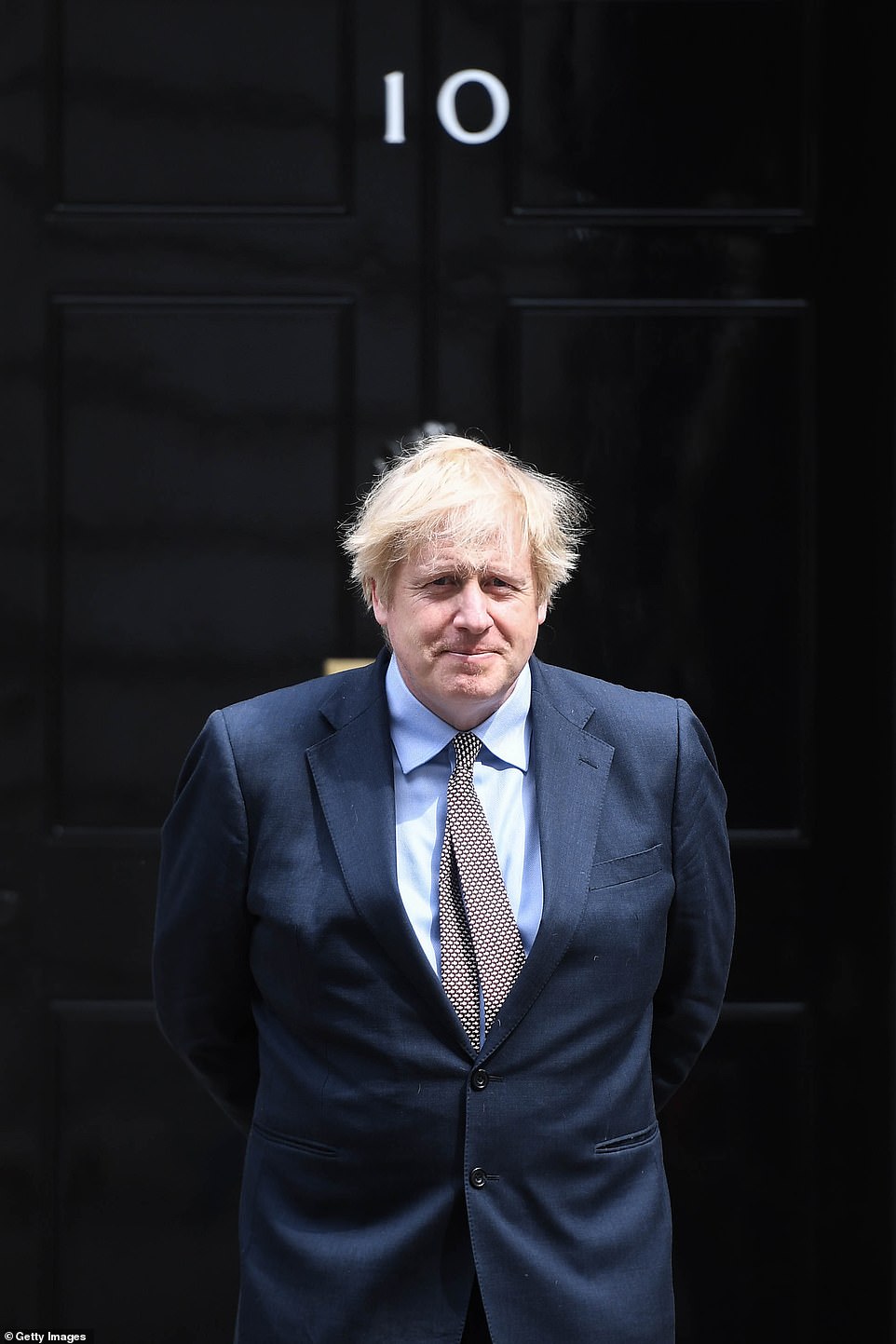 Boris Johnson will tell the British public to ‘stay alert, control the virus and save lives’ as the government drops the ‘stay at home’ message in the next phase of the war against coronavirus (pictured, outside No 10 Downing Street) 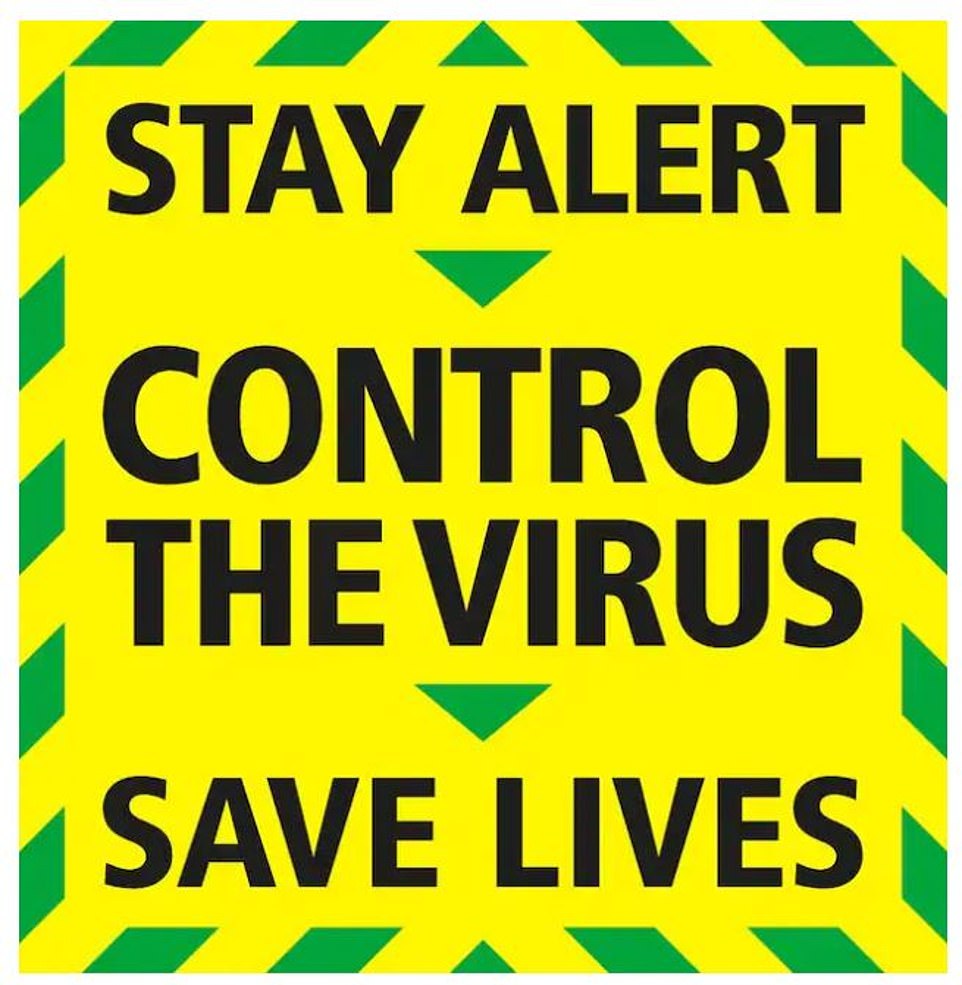 The PM is expected to drop the slogan ‘stay at home, protect the NHS, save lives’ in a televised address to the UK tomorrow at 7pm in an effort to reopen parts of the economy (pictured, new government pandemic slogan)

Mr Johnson is expected to announce tomorrow that England is on the verge of moving down to Level Three, in a sign that there is no significant increase in the Covid-19 infection rate.

It is believed that the new slogan was drawn up by advisers to the Conservative Party’s 2019 election campaign amid fears the earlier instruction to ‘stay at home’ had been too effective.

A No 10 source said that Mr Johnson, who is facing growing calls from Tory MPs to steer Britain clear of a severe economic recession, is ‘proceeding with maximum caution and maximum conditionality’.

The government’s road map for bringing the country out of lockdown will be published in a 50-page document tomorrow. It is understood that MPs will be briefed on the strategy.

The PM is also expected to say that social distancing rules will save livelihoods as well as lives. The change in messaging reflects concerns that Britain faces an economic contraction not felt in 300 years.

His broadcast will be his second national address of the crisis, and the first since he was hospitalised. Beforehand, he will chair a Cobra meeting with leaders of the devolved administrations and London Mayor Sadiq Khan. 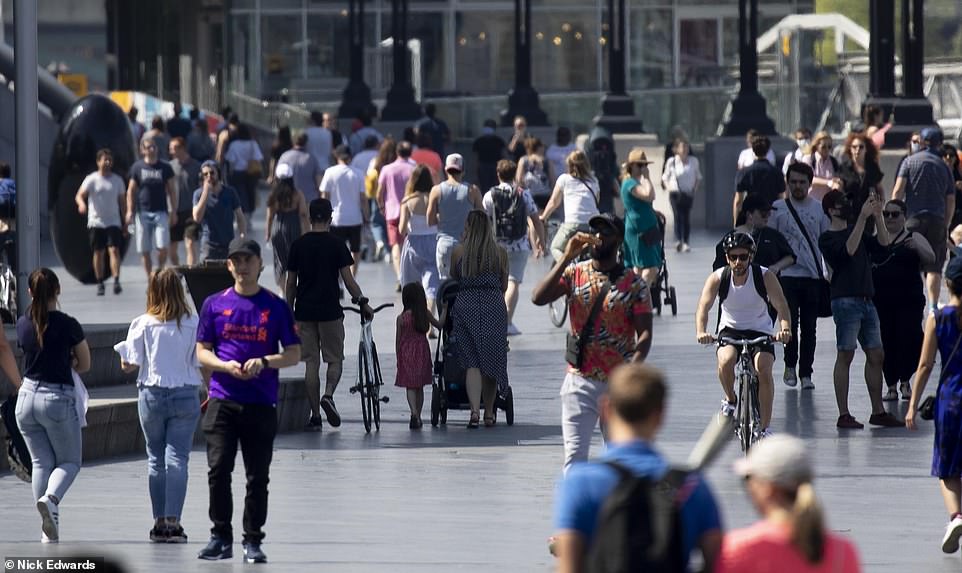 A No 10 source said that Mr Johnson, who is facing calls from Tory MPs to steer Britain clear of an economic recession, is ‘proceeding with maximum caution and maximum conditionality’ (pictured, people by Tower Bridge, London) 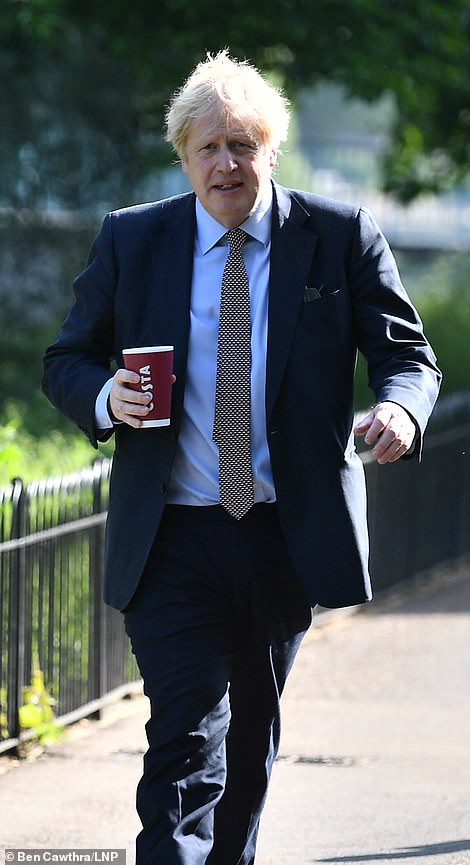 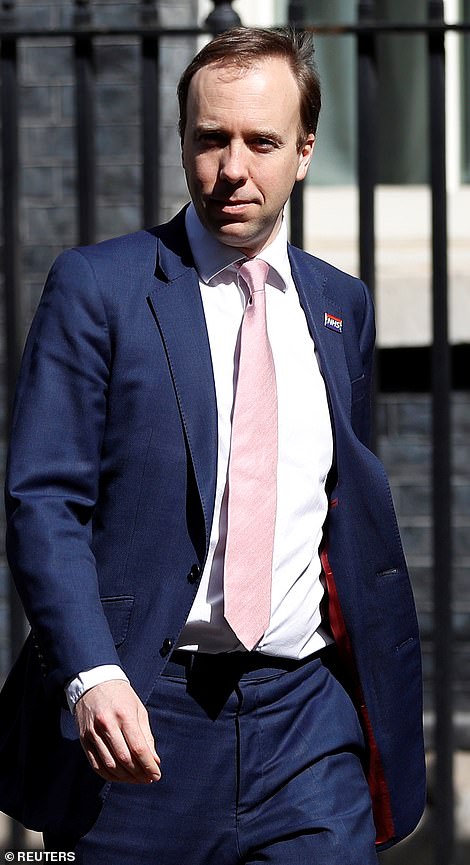 By Glen Owen, Political Editor for the Mail on Sunday

Matt Hancock is living on ‘borrowed time’ as Health Secretary following clashes with the three most powerful members of the Government over the Covid crisis, the Mail on Sunday has been told.

Mr Hancock is understood to have pleaded ‘give me a break’ when Boris Johnson reprimanded him over the virus testing programme – leading to open questioning within Downing Street over Mr Hancock’s long-term political future. His run-in with Mr Johnson follows battles with both Rishi Sunak and Michael Gove over the best strategy for managing the pandemic.

Shortly after Mr Johnson returned to work at No 10, he and Mr Johnson had a tense exchange about the the Health Department’s ‘grip’ on the crisis, during which Mr Hancock said to the PM, in what has been described as a ‘petulant’ tone: ‘That’s not fair – give me a break.’

He is also being blamed in some government quarters – or scapegoated, according to his allies – for not moving quickly enough to do more to protect care homes.

Whitehall officials knew as early as the first week of March that the projected death rate among the over-90s was expected to be as high as 50 per cent.

The change in messaging comes as the Johnson government’s united front is cracking under the pressure of the Covid crisis, with Health Secretary Matt Hancock and the PM at blows.

Mr Hancock, who has come under fire for missing testing targets, urged Mr Johnson to ‘give me a break’ in a furious bust-up which will raise questions over the beleaguered Ministers Cabinet future.

Mr Hancock’s spokesman said Ministers were ‘furious’ about the mistake with the goggles, which they said had been ordered by Labour in 2009.

A Health Department source dubbed them ‘Gordon’s goggles’ and added they were bought against 2001 standards of protection which were superseded by the time they were purchased. ‘Even a decade on, we are still having to clear up Labour’s mess’, they added.

The latest PPE fiasco will be damaging to the Health Secretary, coming days after it emerged that surgical gowns ordered from Turkey and flown into the UK amid great fanfare did not all meet British safety standards.

‘The feeling is that Hancock is on borrowed time,’ said a senior government source.

‘He has fallen out with the most powerful figures in the Government, from the Prime Minister down. Nothing will change immediately. But once we have beaten this thing, expect him to be moved.’

A source said tensions had run high in the run-up to the deadline for hitting the 100,00 tests a day target, but said ‘the PM was full of praise for his performance’. A No 10 source said: ‘This is a critical moment so, having assessed the evidence carefully, the Prime Minister will ask for the public resolve as we continue to do whatever is needed to defeat this devastating virus.’

He tweeted: ‘Thank you for all you are doing to protect our NHS and save lives. This bank holiday weekend, please stay at home, so we don’t undo everything we’ve done so far.’

Yet people still poured into the nation’s beauty spots to soak up some bank holiday sunshine – including the PM who this morning strolled through St James’s Park, where he was accosted by a finger-jabbing passer-by.

It compounded existing accusations that the government is sending mixed messages following a flurry of reports it is preparing to ditch its ‘stay at home’ slogan.

And further casting a cloud of a confusion, a second tweet from the official Downing Street account said: ‘If you are leaving the house this weekend you need to keep two metres apart from others.’

The owner of the MoS, Daily Mail, Metro and the i is giving away £3,000 of advertising in its newspapers – and on Mail Online and metro.co.uk – to 1,000 small businesses.

The groundbreaking giveaway, launched in collaboration with the Federation of Small Businesses, will open for applications from Wednesday at grants.fsb.org.uk.

It is The Mail on Sunday’s way of doing our bit to help firms that provide incomes for more than 17 million people and comes hot on the heels of the hugely successful Mail Force initiative.

That charity, set up by MoS owner Daily Mail and General Trust (DMGT) and its partners, has already raised over £6 million to fly in millions of items of vital protective equipment for NHS staff and care workers.

Today, a survey by accountancy software giant Sage finds one in three firms expect sales to be 50 per cent lower after lockdown is eased. Separate research from legal firm Buckworths found a quarter of small firms do not think the Government’s existing support measures will be enough for them to survive.

Mike Cherry, chairman of the Federation of Small Businesses, said: ‘Our members will be hugely grateful to The Mail on Sunday for this generous support. It’s fantastic.

‘The pandemic is likely to have an impact on businesses for months – if not years – to come and they’ll need a lot of help to get back on their feet. It won’t be enough to rely on word of mouth to attract new customers.

‘We urge every eligible member to apply for this advertising giveaway.