This is the moment a Christian preacher was handcuffed and arrested outside a London underground station and accused of being racist.

Police snatched the elderly man’s Bible from him outside Southgate station on Saturday and when he complained one officer said: ‘You should have thought about that before being racist.’

Video shows two officers approach the man as one warns that he will be arrested for breach of the peace if he does not leave the scene in Enfield, North London, voluntarily.

The man says he will not go, adding: ‘I need to tell them the truth because Jesus is on the way’.

One of the officers told him ‘nobody wants to listen to that’ after the preacher waved his hand in front of the other officer’s face while shouting.

The officer tells him ‘I don’t want to listen to that’ and the evangelist shouts ‘you will listen when you are dead’, at which point he is arrested.

As he is being handcuffed, one of the officers takes his Bible and when the preacher says ‘don’t take my Bible away’ the police officer responds: ‘You should’ve thought about that before being racist’.

Friends of the man claimed passers-by complained to police that he was being ‘Islamophobic’.

Officers arrived just before 2pm and began arguing with the flat-cap wearing Christian preacher who told them ‘I am preaching’.

One officer told him: ‘You’re causing problems, you’re disturbing people’s days and you’re breaching people’s peace. If you won’t go away voluntarily, I will have to arrest you.’

The preacher, wearing a headpiece microphone, talks about Jesus before the officer adds ‘nobody wants to listen to that, they want you to go away’. 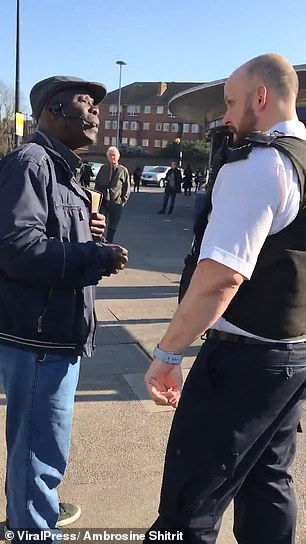 Ambrosine Shitrit, who recorded the video, and is the co-founder of the pressure group Eye on Anti-Semitism, said: ‘The police told him the arrest was because members of the public had said he was being Islamophobic. We’re actually collecting donations now to help with with his legal costs.’

The clip she took does not show the police officer accusing the preacher of ‘Islamophobia’.

Outraged viewers of the video have argued that the Christian preacher was treated differently by the police than Muslims who read from the Koran in public places.

Lawyers from the Christian Legal Centre – which has previously helped to get charges against Christian street preachers dropped – are working to help the man.

Anglican clergyman and former chaplain to the Queen, Rev Dr Gavin Ashenden, said: ‘Perhaps the Archbishop of Canterbury and the House of Church of England bishops might like to protest in favour of the poor and marginalised street preacher at the hands of policemen who neither know nor apply the law?’

Church of England priest in Hereford, Fr Matthew Cashmore said that the arrest was ‘deeply, deeply concerning’ and said the officers should be ‘ashamed of themselves’.

He added: ‘The way his bible was removed is horrendous.’

A Metropolitan Police spokesman said the preacher was later released without charge.

They said: ‘Police were called to Southgate Underground Station at 1.52pm on Saturday, 23rd February in response to concerns raised about a man’s behaviour.

‘An arrest was made to prevent a breach of the peace. The man was then de-arrested and no further action was necessary.’