Police are using a Minority Report-style computer system to predict who is likely to commit crimes and who may become victims.

The £48 million National Analytics Solution analyses vast quantities of data from force databases, social services, the NHS and schools to calculate where officers can be most effectively deployed.

A detailed report about the programme, obtained by The Mail on Sunday, estimates that it could save the public sector up to £1.5 billion and claims that ‘wider societal benefits could exceed £3 billion’. 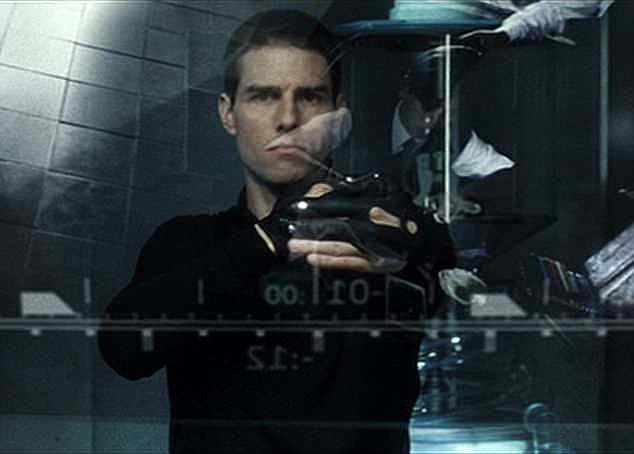 SEEING THE FUTURE: Software like that used by Tom Cruise in Minority Report, above, could soon be used by forces

But it admits to ‘ethical challenges’ about storing and sharing huge amounts of data on individuals and warns of ‘damaging consequences’ if those risks are not tackled.

The project – which has echoes of Minority Report, the 2002 film in which Tom Cruise plays the head of the PreCrime unit that can predict offences and arrest people before the crimes are committed – is being funded by the Home Office and led by West Midlands Police.

In one pilot scheme, officers will try to predict who will be drawn into modern-day slavery, such as migrants forced to work at car washes, nail bars or brothels.

Another possible use would be to identify vulnerable individuals at risk of going missing.

An initial trial combined data on crimes, custody, gangs and criminal records to identify 200 offenders who were getting others into a life on the wrong side of the law.

In an effort to address privacy concerns, those behind the trial say it will ‘not create a centralised law enforcement database’ that would allow any officer to search for information on individuals.

…as Yard bosses star on ‘Metflix’

They are unlikely to garner the viewing figures of crime dramas such as Luther, Line Of Duty or Bodyguard, but Scotland Yard officers are starring in their own films on a website called Metflix.

Police chiefs have set up the ‘mini-YouTube’ to allow officers and staff to share skills and information.

Topics include advice on how to breathalyse a suspected drink-driver, how to safely store forensic evidence, and interview techniques.

About 100 clips have been uploaded so far and watched by a total of 1,200 people.

Met officers are warned to make their videos ‘public-proof’ and to ensure that they ‘don’t criticise particular people or make it personal’.

Scotland Yard said: ‘The website was designed and developed in-house as a pilot by the team in their spare time and has not incurred any costs. Owing to its success, the Met has invested £4,000 in the site to incorporate it as part of our strategy for learning and development.’

Despite that, academics warned such use of ‘big data’ posed huge questions for police. ‘We see the National Analytics Solution as moving law enforcement away from its traditional crime-related role and into wider and deeper aspects of social and public policy,’ said a study by the Alan Turing Institute for artificial intelligence.

It added that the project raised concerns about ‘surveillance and autonomy’, ‘the potential reversal of the presumption of innocence’, and the impact of ‘inaccurate prediction’.

Another pilot, entitled ‘workforce wellbeing’, intends to identify which police officers are at highest risk of being signed off sick or attacked while on duty. The report claims the software could improve efficiency, saving almost £20 million if sickness rates are reduced.

Britain’s first experiment with predictive policing recently ended after five years. Kent Police used a computer system created by an American firm called Predpol to analyse the time and location of previous incidents to work out where future street crime might take place.

However, the force revealed last month that the contract of about £100,000 a year had ended because it was unclear whether it was reducing crime. The Mail on Sunday revealed earlier this year that Norfolk Constabulary was using technology to help detectives decide if burglaries should be investigated fully. The force created a ‘solvability algorithm’ that examined 29 factors to determine whether it was likely that a suspect would be traced.

Silkie Carlo, director of civil liberties campaign group Big Brother Watch, criticised the new idea. ‘This would be a remarkable change in policing,’ he said. ‘Every one of us would risk being monitored, judged and having our lives intruded upon.

‘Predictive policing conflicts with the presumption of innocence that our justice system is built on and invites authorities to keep tabs on innocent citizens. It’s extraordinary that police have spent millions on a Minority Report-style scheme.’