The son of one of Britain’s police and crime commissioners has been jailed after his father decided he had no choice but to press charges after he destroyed his TV during a drunken rampage.

Sherinder Dhindsa picked up a £400 LED smart TV in the bedroom of his parents’ house in Allestree, Derby, and threw the gadget at a radiator, smashing it to pieces.

His father Hardyal Dhindsa, who became the PCC for Derbyshire in 2016, said he and his wife had no choice but to pursue a prosecution as it was the latest in a string of alcohol-fuelled incidents involving their son. 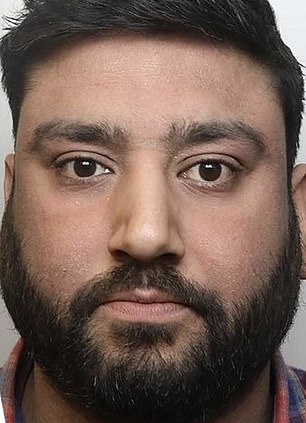 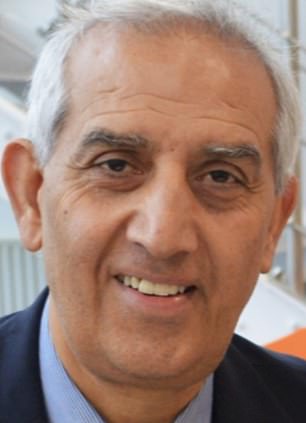 Sherinder Dhindsa (left) picked up the TV in his father Hardyal Dhindsa’s house, leading to him being convicted of criminal damage. Both of these images are undated

Weeks before, the 31-year-old had been charged for refusing to take a police breathalyser test following a car accident.

That incident in September saw him handed a suspended jail sentence and a 40-month driving ban.

After Sherinder was jailed for 19 weeks following the second incident, Mr Dhindsa used the case to highlight the need for more resources to help fight the scourge of addiction on society.

On November 30, he turned violent so his parents went into their bedroom, Southern Derbyshire Magistrates’ Court heard.

But he came inside and put his fist through the wall-mounted TV before throwing it at a radiator.

The court heard how Sherinder Dhindsa had become ‘addicted’ to alcohol after splitting from his partner and taking over a pub.

Prosecutor Mark Fielding said: ‘On this particular evening, he had been drinking again, which rather disappointed his parents.

‘He was making various threats to them, so they adopted their usual tactic of disengaging with him by retreating to their bedroom.

‘He followed them and they continued to ignore him. He then turned his attention to a television. He initially put his fist through the screen and continued to generate an argument with his parents.

‘He then picked the TV up and threw it at a radiator, smashing it into pieces.’

Mr and Mrs Dhindsa were so ‘frightened’ they called the police and had their son arrested.

They also applied for a restraining order as they have ‘simply had enough’, according to Mr Fielding. 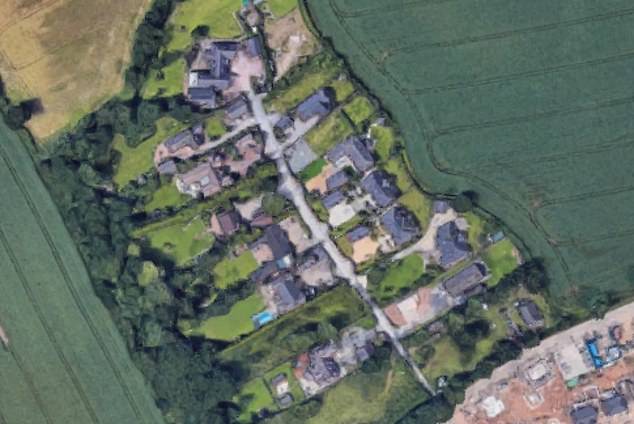 On November 30, Sherinder turned violent so his parents went into their bedroom, Southern Derbyshire Magistrates’ Court heard. Pictured: A GV of their road

Mr Dhindsa provided a statement to the court that explained their decision to press charges.

This said: ‘We still love him. I want to help him – we want our son back but we can’t have him living with us, for our own safety.

‘We do want to support him, but in a structured way outside of our home. We hope he continues to get help for his addiction and problems inside his head.

‘We still want to have contact with him. We just don’t want him to come to our own home.’

Magistrates imposed a two-year restraining order on Sherinder Dhindsa that prohibits him from going to his parents’ house.

He was jailed for eight weeks. In addition, magistrates activated an 11-week suspended sentence handed to him during his previous court appearance.

He told the court: ‘Rehab is something he knows he needs. He went into a rehabilitation unit last year. It did work for a short period of time, but unfortunately he relapsed.

‘He has been living with his parents for most of his life. There have been ups and downs – that happens in most houses.

‘He appears to be at a point where he is no longer welcome at that address, but that is not the end of the relationship.

‘He knows alcohol has to be defeated and he is keen for it not to win over him.’

Presiding magistrate Keith Robinson explained to Sherinder why he was being sent to prison.

‘This incident was carried out only ten days after a suspended sentence was given to you,’ he said. ‘You would have been fully aware of what would happen if you failed to stay out of trouble.

‘Therefore, we are going to activate the suspended sentence and add a further eight weeks [for the criminal damage].

‘That amounts to 19 weeks. You will serve half of the time in custody and the rest on licence.’

Following the hearing, Mr Dhindsa said of his son’s sentencing: ‘This is a personal matter for my son who will of course take responsibility for, and accept the consequences of, his actions.

‘Those consequences are, rightly, a matter for the criminal justice system. That is as it should be and I hope that you understand that I do not wish to say anything further about this incident.’

‘This is why I will continue to call for more resources to be invested in local and national support programmes,’ he said.

‘Enforcement alone will never solve the problem, this is a health issue which unfortunately can turn into police matter.

‘As I’m sure you will appreciate this has been a particularly stressful time for my family and we would all be grateful to have some privacy in which we can come to terms with recent events.’