A former police officer who allegedly sexually assaulted his young stepdaughter has been extradited from Britain after a judge criticised Victoria Police's "snail's pace" investigation.

Robert Scott, 88, has been charged with four counts of indecent assault and one count of gross indecency allegedly committed while he was serving as an officer in country Victoria from 1965 to 1975. 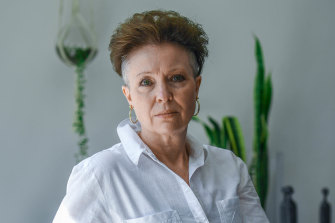 Sexual assault survivor Kim Elzaibak has been given permission by the courts to publicly identify herself.Credit:Joe Armao

Investigators said the charges followed an investigation into the sexual assault of Kim Elzaibak between 1974 and 1979 when she was a child.

In January a senior British judge who approved the extradition sharply criticised Victoria Police's inaction in investigating the case over two decades.

Ms Elzaibak first went to police in 2000 to report her former stepfather, who had moved to England 15 years earlier. But police believed there was no chance of interviewing Mr Scott because he lived overseas, and the investigation was dropped.

Her case was reopened in 2013 when she went to police after she was contacted by Mr Scott’s stepson. It took another 22 months before police issued an arrest warrant.

Ms Elzaibak has successfully sought an order in the magistrates court so she can talk openly as a victim about the alleged offending.

Mr Scott denies the allegations that he sexually assaulted his then-stepdaughter when she was aged between three and nine.

Senior district judge Emma Arbuthnot, the chief magistrate of England and Wales, found Victoria Police was at fault for the investigating delays and had no explanation. She found the investigation should have been completed within a few years after 2000.

"The complainant [Ms Elzaibak], who attended the Westminster Magistrates Court for the extradition hearing, would have every reason for criticising the handling of the investigation in Australia," she found. 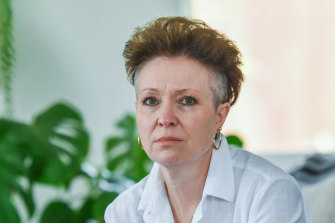 "The attitude of the police to this allegation may well explain why a Royal Commission into Institutional Responses to Child Sexual Abuse was required.

"The delay between 2000 and 2013 is the fault of the police, who for one reason or another, having received the complaint, did not pursue the investigation.

"The delay between 2013 and today is also the fault of the police, who seem to have investigated these allegations at a snail's pace. The delay from 2000 is rightly described by [Mr Scott's lawyer] as culpable delay."

Mr Scott opposed extradition because of the passage of time and argued it was oppressive for him to leave his northern England home given his physical and mental health.

He has back and prostate problems, uses a pacemaker and has been diagnosed with mild dementia, though refuses treatment. A medical assessment found his memory was patchy.

He claimed he was fearful of flying and claustrophobic, but had no supporting medical evidence.

Judge Arbuthnot found Mr Scott's symptoms were not as serious as he said. She acknowledged he would experience hardship in returning to Australia and being held in custody, but it would not be unjust or oppressive.

Mr Scott was to appeal that decision too, but abandoned the challenge.

Lawyers acting for Australia argued the charges were serious, that Mr Scott could be properly cared for in prison and that he would receive a fair trial.

"I am dealing with a lot of anger at the moment; I am so angry at the police," she said. "The whole time I was there [in England] I was on a knife-edge, thinking, 'I am going to lose this because of their actions.' It was heartbreaking. Every time they mentioned the timeline of this case, it was like the knife got twisted a bit more."

Ms Elzaibak is also angry that Mr Scott for years received a pension from Victoria Police after he left the force in the 1970s following a motorcycle crash, despite being under investigation.

"I have done nothing wrong and he is still getting rewarded," she said. "Where's the justice in that?"