A Good Friday service at a Polish church was shut down by police for breaching Covid rules as worshippers were threatened with £200 fines.

Officers shut down the religious ceremony in Balham High Street, south London, at around 5pm yesterday.

Footage shared on social media shows an officer tell worshippers that the gathering is ‘unlawful’ and that they have to go home.

But the parish Parafia Chrystusa Krola — Christ the Believer — has issued a statement saying it believes police ‘brutally exceeded their powers’.

And people on social media have slammed the police’s ‘disgraceful’ handling of the situation, with some describing it as ‘deeply offensive’.

Official coronavirus guidance states communal worship or prayer can be attended by as many people as a place of worship can accommodate, as long as they are socially distanced.

People are also encouraged not to mingle after a service and go back to their homes as quickly as possible. 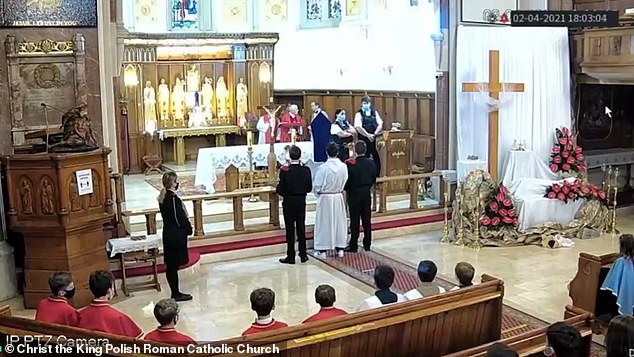 Police shut down a Good Friday service at a Polish church in Balham High Street, south London, at around 5pm yesterday, with officers threatening worshippers with £200 fines

In the video, a police officer tells a church full of worshippers wearing face masks that they have to stop the Good Friday service.

He says: ‘You are not allowed to meet inside with this many people under law. At this moment in time you need to go home.

‘Failure to comply with this direction to leave and go to your home address, ultimately could lead you to be fined £200 or, if you fail to give your details, to you being arrested.

‘It’s Good Friday and I appreciate you would like to worship, but it is unlawful.’

The church criticised the police for interrupting the service, reported Sky News.

In a statement, the parish said: ‘The policemen found our liturgical assembly illegal, ordering everyone to leave our temple immediately on pain of a £200 fine for each parishioner present or even arrest.

‘The faithful obeyed this order without objection. All government requirements had been complied with.

‘We regret that the rights of the faithful have been wronged on such an important day for every believer.’

It said it believes the officers ‘brutally exceeded their powers by issuing their warrant for no good reason’ because ‘all government requirements were met’.

The incident has been reported to the superiors of the Polish Catholic Mission in England and Wales, the church added.

People on social media have slammed the police for shutting down the service, labelling the handling of the situation ‘disproportionate’.

One wrote: ‘I’m actually ashamed of what you did on Good Friday of all days.

‘Stop hiding behind Covid transmission, when we see large scale protests being facilitated at this very minute in London.’ 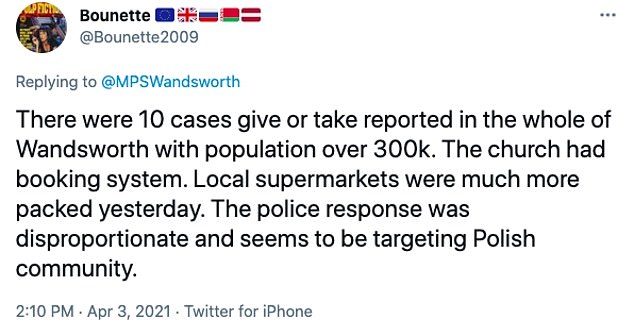 Teresa Wilkins said: ‘Disgraceful, disproportionate and deeply offensive on the most solemn day of the Catholic calendar.’

Another wrote: ‘Absolutely disgraceful behaviour by the police.’

And another use said: ‘Another example of the UK police having a dreadful pandemic.’

London Metropolitan Police said it was called to reports of large crowds gathering outside the church before the congregation.

A spokesperson said: ‘Officers attended and found a large number of people inside the church.

‘Some people were not wearing masks and those present were clearly not socially distanced.

‘Understanding the sensitivity of the situation, officers engaged with the priest outside the church and were invited inside to address the congregation.

‘No fixed penalty notices were issued.’