Polish firemen pull 100 TONS of dead fish from Oder river amid fears of mass poisoning: Officials desperately try to work out what is killing the marine life

The Polish government fear 100 tons of dead fish were poisoned, prompting the country to send river samples abroad in a desperate bid to find out the cause.

More than 500 firefighters have been needed to recover the dead fish in the Oder river, which have also been found floating into Germany since Friday.

Polish officials have confirmed that they suspect chemical waste was dumped in the river, and they are sending samples to the UK, the Czech Republic and the Netherlands to find out the exact cause.

Due to the amount of dead fish, dams, oats, quad bikes and even drones have been used to help recover them. 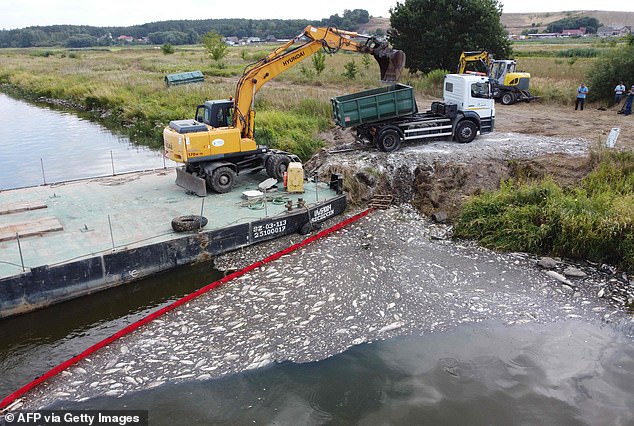 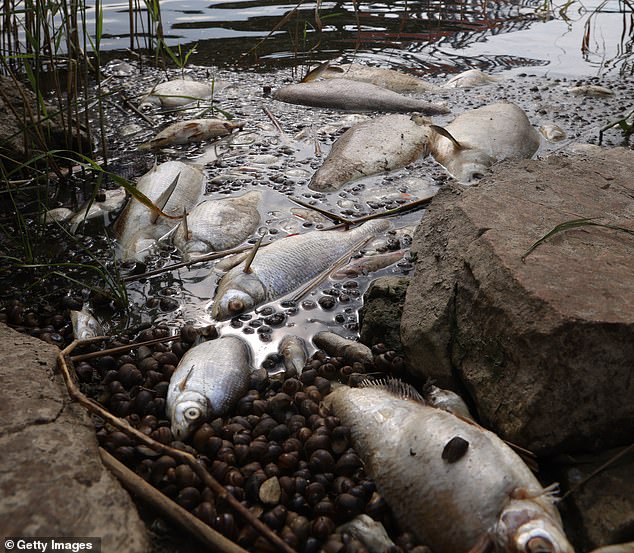 The fish (pictured) have been seen floating through Poland into Germany, prompting the German government to accuse Polish officials of not taking ‘swift action’

German officials have accused the Polish government of failing to take swift action, as fishermen first reported mass fish deaths at the end of July.

Poland’s government have now vowed to find the cause and punish whoever is responsible for polluting the river water.

Polish Prime Minister Mateusz Morawiecki said: ‘It is likely enormous quantities of chemical waste was dumped into the river in full knowledge of the risk and consequences.’

The Prime Minister’s Chief of Staff Michal Dworczyk added: ‘We are determined to make every person and every establishment responsible for this kind of incident bear the consequences.’

In response to the deaths the Prime Minister has fired the CEO of Polish Waters, which is the state-owned company in charge of water management, and the head of the environmental protection inspectorate.

Poland’s government has now offered £180,0000 to anyone who can ‘help find those responsible for this environmental disaster’. 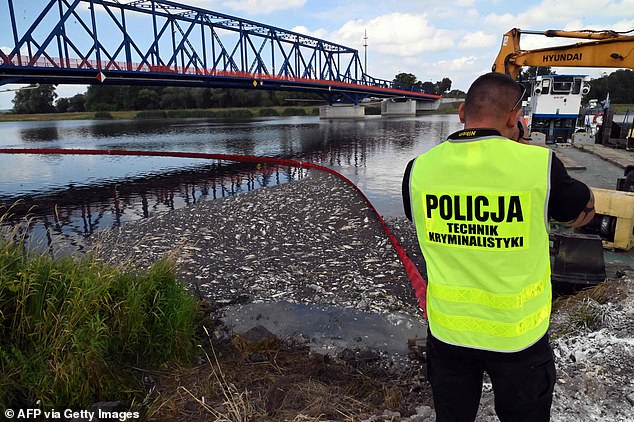 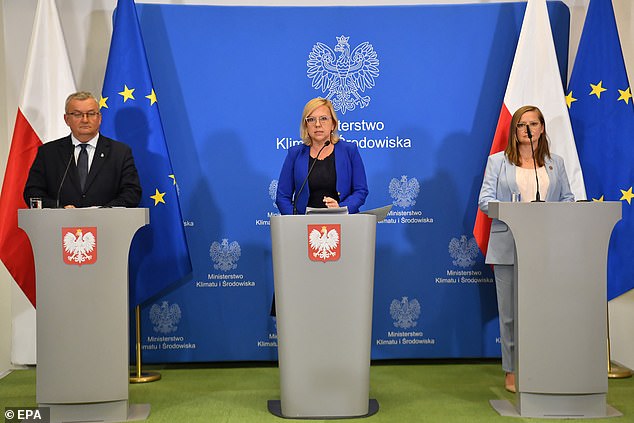 Anna Moskwa (centre), the Climate and Environment Minister, has said that none of samples tested so far have been toxic but they still suspect chemical waste is involved

But Climate and Environment Minister Anna Moskwa said that ‘none of the samples tested so far have shown the presence of toxic substances’ and the government are looking at alternative causes such as natural causes and higher temperatures.

Others have expressed their fears over what the mass death mean for the local eco-system.

Karina Dork, who is a district administrator of Germany’s Uckermark region, told the Tagesspiegel newspaper: ‘We have to see how the bird population develops and what will happen to the racoons and otters.

‘It is a catastrophe that will stay with us for years.’

The Oder was known as a clean river, and 40 domestic species of fish are found in the waterway.