Armenia’s first registered trans woman has faced threats from politicians to burn her alive after she gave a speech on trans rights in parliament.

Lilit Martirosyan spoke out against violence and stigma directed at trans people in a speech to parliament three weeks ago, and called for greater protections.

Since then she has received a string of death threats and abuse, and has seen her address published online leading to protests outside her house. 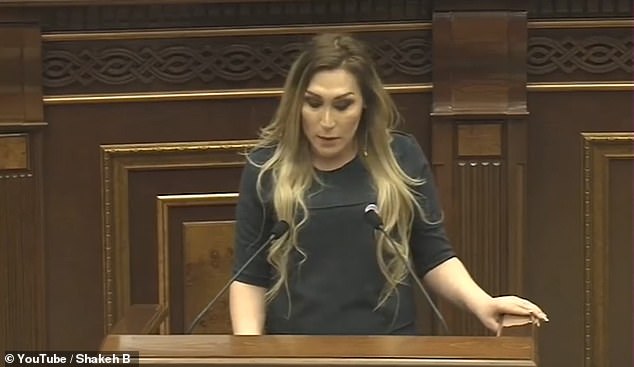 There have been anti-LGBTI protests in front of the national assembly and some parliamentarians have called for her to be burned alive, according to The Guardian.

Speaking to the newspaper, she said: ‘This was the first time in Armenia when a transgender woman spoke from a high podium… of violence against transgender people.

‘[A] transphobic man with a knife came to the national assembly to announce that he would kill me and that others like me must be killed, too.

‘I have received many messages via Facebook and email from various people telling that they will find and kill me.’

Martirosyan was invited to speak during an April 5 sessions on human rights reforms on behalf of the Right Side campaign she founded.

But it appears politicians were unaware of the content of her speech, which she used to draw attention to the violence faced by the LGBT+ community in Armenia.

She said: ‘I am delivering this speech to you as a transgender woman, but I ask you to see me as a collective figure.

‘I call upon you to carry out reforms and policies to achieve gender equality, and to ensure human rights for everyone.’

Martirosyan was subsequently kicked out of parliament, with politicians from both sides blaming the other for allowing her to take the podium in the first place. 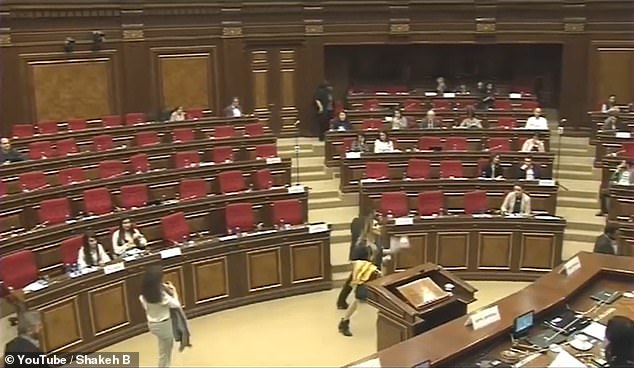 Martirosyan was ejected from parliament and has since faced a wave of abuse, including calls from politicians to have her burned alive

A protest of around 100 people gathered in front of the building three days later to denounce the speech, joined by religious figures who asked that the floor of the house be consecrated.

Prominent politician Gagik Tsarukyan subsequently denounced ‘perverts’ saying: ‘This is a vice, we must hide the vice, as it was before.

‘We will never allow this phenomenon to spread.’

The EU and UN have since come to the defence of Martirosyan, condemning discrimination and threats of violence against her.

Armenia is a deeply religious society which is home to one of the world’s oldest Christian communities, the Armenian Apostolic Church, with more than 90 per cent of the population identifying as followers.

While the country decriminalised homosexuality in 2003, attitudes towards gay people in the country have been slow to change.

In a 2012 survey, 55 per cent of people said they would cut off interactions with a friend or relative who came out as gay.

The country ranks second-bottom in Europe in terms of rights and support for the LGBT+ community, according to data gathered by the International Lesbian, Gay, Bisexual, Trans and Intersex Association.