‘He’s going to show up loaded for bear’: Pompeo warns that Putin will make short work of Biden at today’s showdown and that America’s enemies can ‘smell’ the president’s weakness

Former Secretary of State Mike Pompeo has accused President Joe Biden of ‘weakness’ and predicted that Russian President Vladimir Putin will put the screws on him during their showdown meeting.

‘I expect tomorrow Putin will press, he will see how far he can push President Biden,’ Pompeo told Fox News host Sean Hannity hours before the summit on Wednesday in Geneva.

‘He’s going to show up loaded for bear, because the actions of Biden’s administration to date suggest that will be successful,’ Pompeo said of Putin.

Pompeo urged Biden to ‘hold Russia accountable for its malign activity, and to make clear there are red lines,’ but accused accused the U.S. president of showing an ‘enormous sign of weakness’ by refusing to hold a joint press conference with Putin. 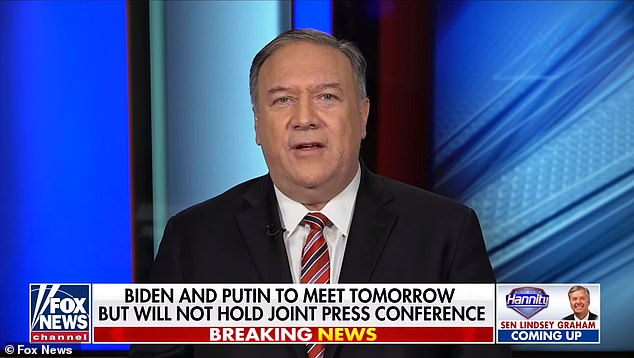 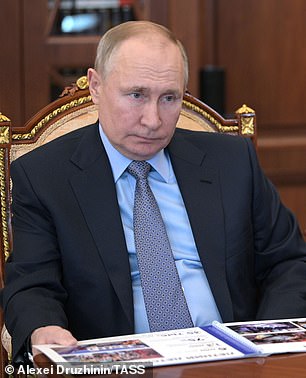 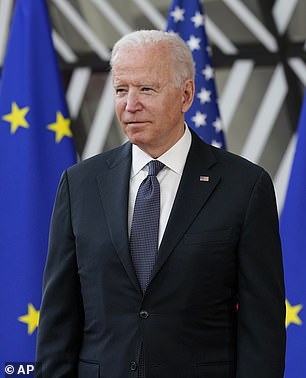 Putin and Biden are scheduled to meet on Wednesday in Geneva, in a major foreign policy test for Biden at US-Russian relations reach an all-time low

‘The fact that you’re not prepared to stand six or eight feet from your adversary and tell the world what it is you talked about, the things you care about and why you care about them, shows enormous weakness,’ Pompeo said.

‘Whether it’s Chairman Kim, or the ayatollah or Xi Jinping, they’re watching this too, and when they smell weakness, when they can sniff it, the deterrence model that America’s successful defense depends upon will walk away,’ he said.

Pompeo slammed Biden for perceived weakness in his dealings with Russia so far as president, claiming the Trump administration took a tougher line.

‘They re-entered the New START treaty at the very beginning, a nuclear treaty, and we didn’t ask for anything, they wanted it desperately and we gave it up,’ he said. 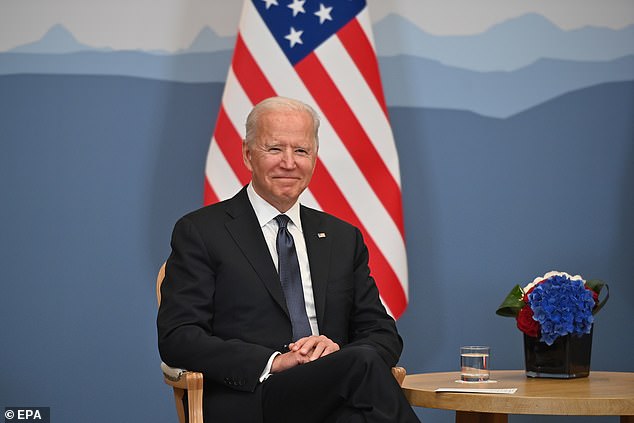 It comes as U.S. senators issue public calls for Biden to confront Putin on Havana Syndrome

It comes as U.S. senators issue public calls for Biden to confront Putin on Havana Syndrome, the plague of directed-energy weapon attacks on U.S. diplomats and CIA personnel that have left dozens with debilitating symptoms.

Russia is considered by the intelligence community to be the prime suspect in the attacks, though no conclusive evidence has emerged to definitively name the perpetrator.

Experts speculate that the incidents, which were first recorded in Havana, are the result of powerful microwave beams directed at U.S. officials in an attempt to gather data from their electronic devices.

‘Certainly the Russians are one of the key suspects. We don’t know for sure, but keep in mind there have been more than a hundred American public servants who have been injured by these directed energy attacks,’ said Senator Susan Collins, a Maine Republican, during an interview with CBS News’s Face The Nation.

‘We need not only to take care of their medical needs, but also to find out who it is,’ she said. ‘I hope the president will bring up this issue with President Putin directly.’

Biden and Putin’s sit-down in the Swiss capital comes at a time when both leaders agree that U.S.-Russian relations are at an all-time low. 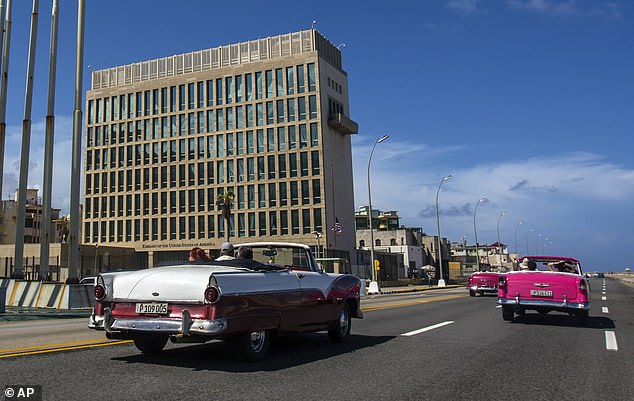 Biden faces increasing pressure to confront Putin on suspected directed energy weapon attacks on US officials. The problem has been labeled the ‘Havana Syndrome,’ because the first cases affected personnel in 2016 at the U.S. Embassy in Cuba (seen above in a file photo)

For four months, the two leaders have traded sharp rhetoric. Biden repeatedly called out Putin for ransomware attacks by Russian-based hackers on U.S. interests, a disregard for democracy with the jailing of Russia’s foremost opposition leader and interference in American elections.

Putin, for his part, has reacted by going on the offensive, insisting that the Russian government hasn’t been involved in any election interference or cyberattacks and claiming there is no evidence to support such allegations.

Pressed on his government’s treatment of political dissidents, Putin turned the tables and pointed to the arrests of hundreds of participants in the January 6 U.S. Capitol riot, accusing the Biden administration of punishing them over their ‘political demands.’

Now, they will meet for their first face-to-face as leaders – a conversation that is expected to last four to five hours. In advance, both sides set out to lower expectations.

Even so, Biden has called it an important step if the two nations are able to ultimately find ‘stability and predictability’ in their relationship, a seemingly modest goal from the president for dealing with the person he sees as one of America’s fiercest adversaries.

‘We should decide where it’s in our mutual interest, in the interest of the world, to cooperate, and see if we can do that,’ Biden told reporters earlier this week. ‘And the areas where we don’t agree, make it clear what the red lines are.’

Both sides have said they hope their talks in a stately lakeside Geneva villa can lead to more stable and predictable relations, even though they remain at odds over everything from arms control to Ukraine.

‘We’re not expecting a big set of deliverables out of this meeting,’ a senior U.S. official told reporters aboard Air Force One as Biden flew to Geneva, saying the two are expected to talk starting at around 7am ET.

‘I’m not sure that any agreements will be reached,’ said Putin’s foreign policy adviser Yuri Ushakov. 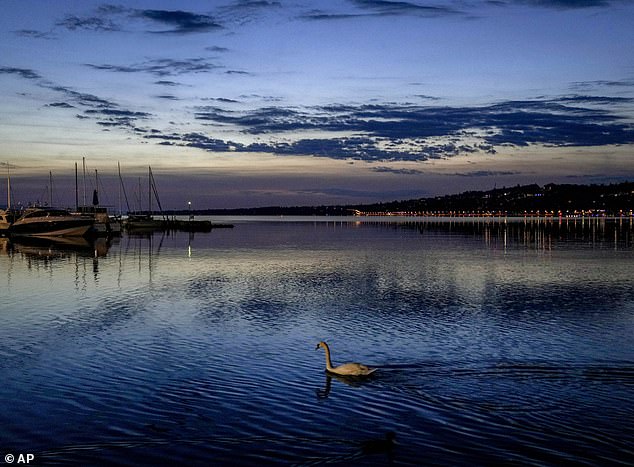 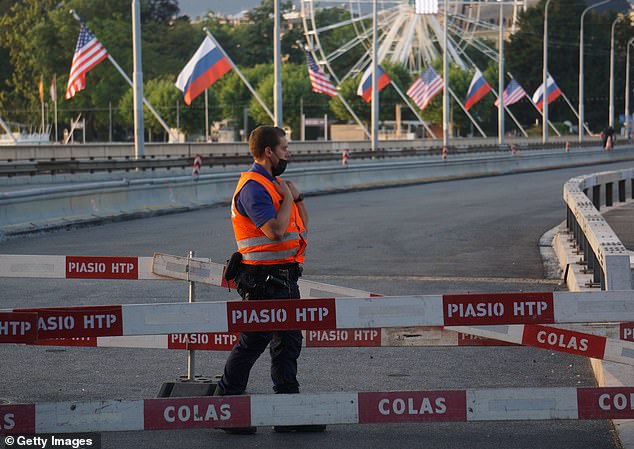 A Swiss police officer stands watch at a bridge near Geneva Lake early Wednesday in Geneva, securing the area where Biden and Putin are set to meet

Relations have deteriorated for years, notably with Russia’s 2014 annexation of Crimea from Ukraine, its 2015 intervention in Syria and U.S. charges – denied by Moscow – of its meddling in the 2016 election that brought Donald Trump to the White House.

They sank further in March when Biden said he thought Putin was a ‘killer’, prompting Russia to recall its ambassador to Washington for consultations. The United States recalled its ambassador in April. Neither has since returned.

The senior U.S. official said the United States aimed for a set of ‘taskings’ – Washington jargon for assigning aides to work on specific issues – ‘about areas where working together can advance our national interests and make the world safer.’

Arms control is one domain where progress has historically been possible despite wider agreements.

In February, Russia and the United States extended for five years the New START treaty, which caps their deployed strategic nuclear warheads and limits the land- and submarine-based missiles and bombers to deliver them.

Vladimir Frolov, a former Russian diplomat, told Reuters Putin wanted respectful ties and to be treated like members of the Soviet Politburo were in the 1960s-1980s, with ‘a symbolic recognition of Russia’s geopolitical parity with the U.S.’

‘In exchange, they (Moscow) would be willing to cut back on some of the loony stuff,’ Frolov said, saying he meant ‘no poisonings, no physical violence, no arrests/kidnappings of U.S. and Russian nationals. No interference in domestic politics.’

‘The principal takeaway, in the positive sense, from the Geneva meeting would be making sure that the United States and Russia did not come to blows physically, so that a military collision is averted,’ he said.

In a sign of the strained ties, the talks will not include any meals and Putin and Biden are expected to hold separate news conferences rather than a joint one.

‘No breaking of bread,’ said the senior U.S. official.