Christians should forgo the greed, gluttony and materialism of Christmas and focus on charity and love, Pope Francis says as he addresses thousands at his traditional Christmas Eve mass

Pope Francis has urged the world’s Christians to reject gluttony and materialism as he ushered in Christmas with a late-night Mass at St. Peter’s Basilica.

Francis, marking the sixth Christmas of his papacy, led a solemn service for nearly 10,000 people in the Vatican church for his traditional festive.

During the Mass the Pope urged people in the developed world to seek a simpler, less materialistic life and condemned the yawning gap between the rich and the poor.

Worshippers who want to catch a glimpse of the Pope at Christmas were advised to request tickets up to six months in advance.

Meanwhile his deputy is traveling to Iraq to celebrate with the country’s long-suffering Christians. 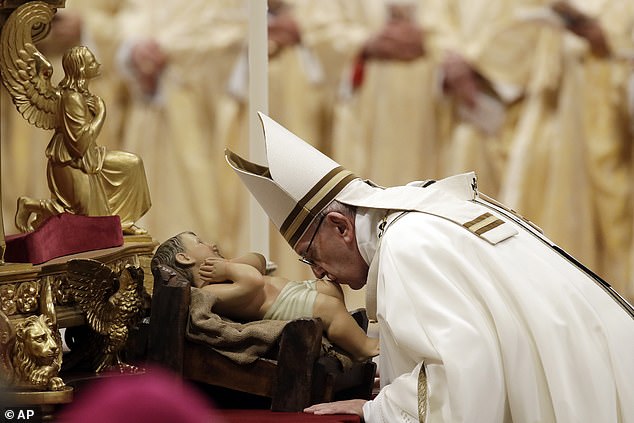 Pope Francis kisses a statue of Baby Jesus as he celebrates the Vatican’s Christmas Eve Mass tonight, at the start of a busy festive schedule for the 82-year-old pontiff 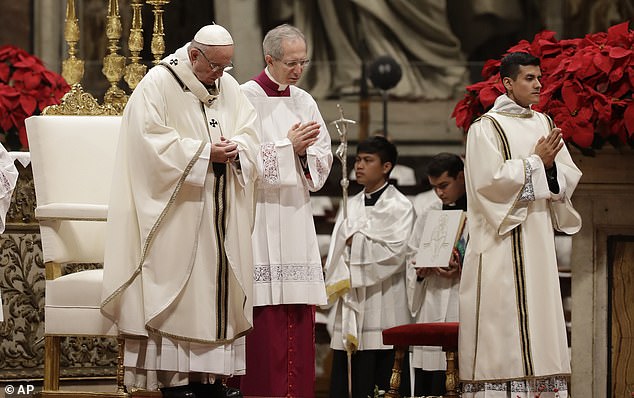 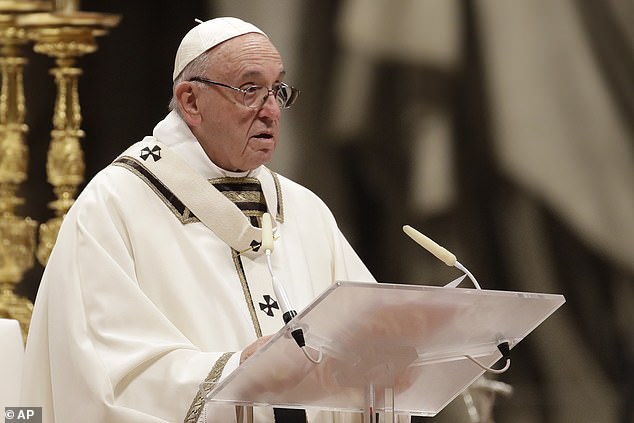 The Pope delivers his message at the festive Mass during which he urged people in the developed world to seek a simpler, less materialistic life 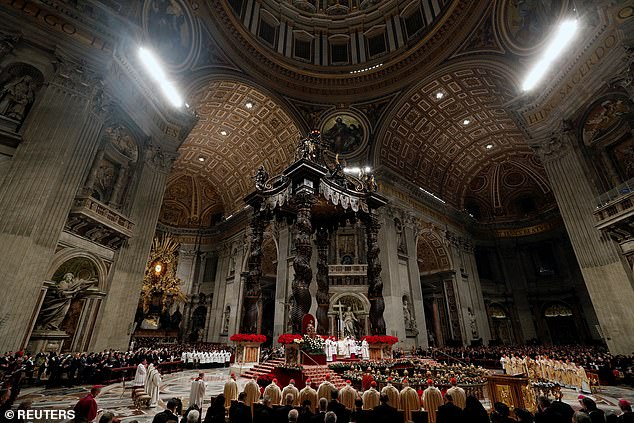 In his homily, Francis said the infant Jesus, born in poverty in a stable, should make everyone, particularly those who have become ‘greedy and voracious,’ reflect on the real meaning of life.

‘Let us ask ourselves: Do I really need all these material objects and complicated recipes for living? Can I manage without all these unnecessary extras and live a life of greater simplicity?’ Francis said.

‘In our day, for many people, life’s meaning is found in possessing, in having an excess of material objects.

‘Standing before the manger, we understand that the food of life is not material riches but love, not gluttony but charity, not ostentation but simplicity.

‘An insatiable greed marks all human history, even today, when, paradoxically, a few dine luxuriantly while all too many go without the daily bread needed to survive.’

Meanwhile Vatican Secretary of State Cardinal Pietro Parolin was in Baghdad today in an effort to signal Rome’s solidarity with the struggling religious community there.

Catholics are among the religious minorities devastated by Islamic State-inspired violence that has driven tens of thousands from their homes.

He is scheduled in the coming days to travel to northern Iraq to meet with Kurdish leaders in Irbil and to celebrate Mass in Qaraqosh in the Nineveh plains, near Mosul, according to the Vatican.

The Vatican has for years expressed concern about the exodus of Christians from communities that have existed since the time of Jesus.

This year, Francis joined Orthodox leaders to decry what he called the ‘murderous indifference’ of world powers to violence and suffering in the Middle East. 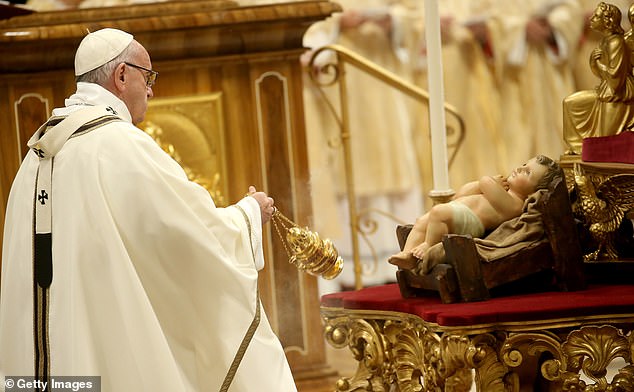 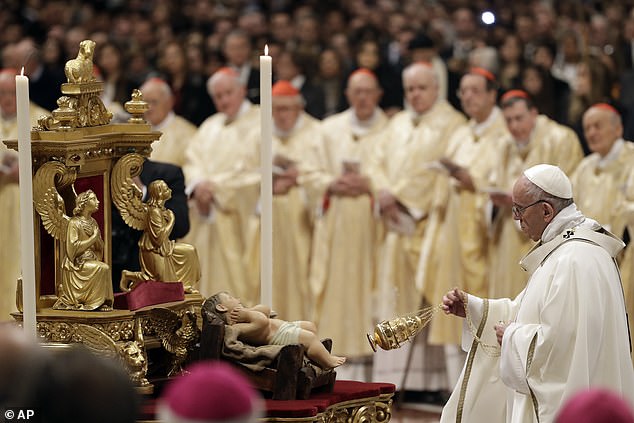 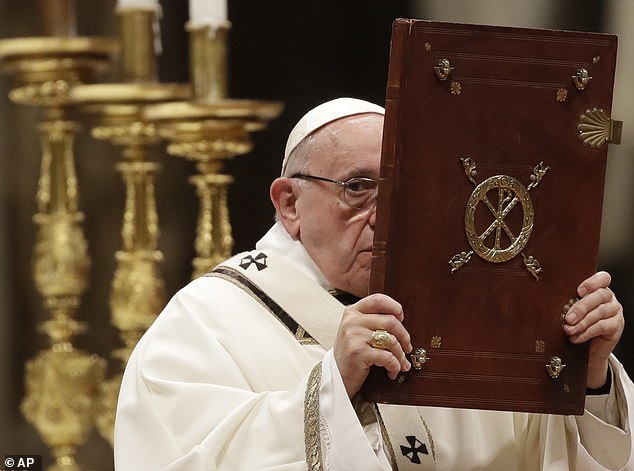 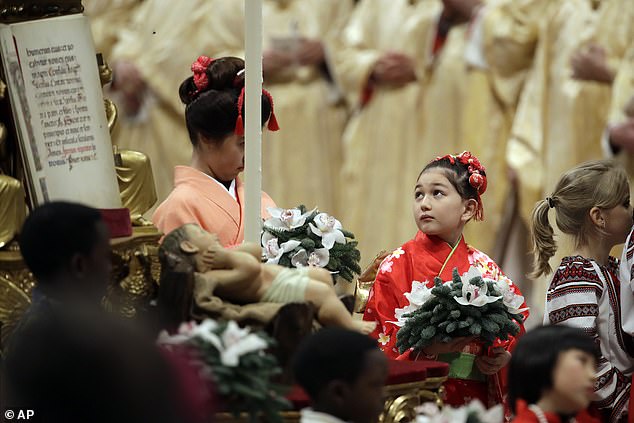 Francis, the first pope from Latin America, has made defending the poor a hallmark of his papacy.

On Saturday, the Vatican said he had given the homeless in Rome a Christmas gift of a new clinic in St. Peter’s Square where they can get free medical help.

The Catholic charity Caritas estimated late last year that there are more than 16,000 homeless in Rome and their number congregating near the Vatican has grown visibly in recent years, especially at night when they cluster under arcades to sleep.

Monday night’s Christmas Eve papal Mass was the first held with a new, energy-saving lighting system for the largest church in Christendom.

The modern system in the centuries-old church employs 100,000 LEDs, using only 10 per cent of the energy of the previous system.

On Christmas Day on Tuesday, Francis will deliver his twice-yearly ‘Urbi et Orbi’ (to the city and the world) message from the central balcony of St. Peter’s Basilica, the same balcony where he first appeared after his election on March 13, 2013. 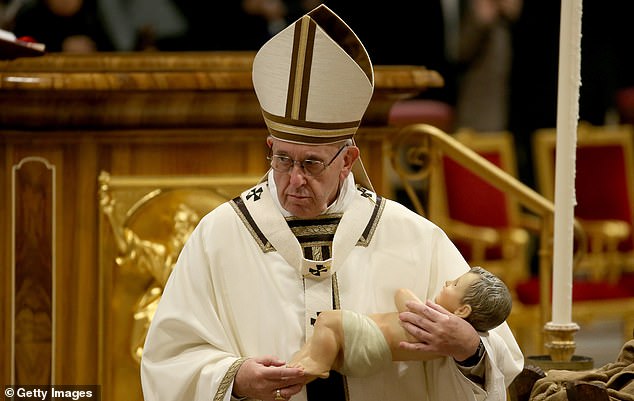 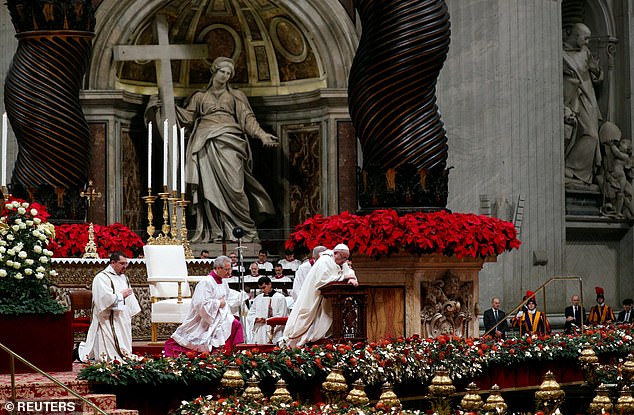 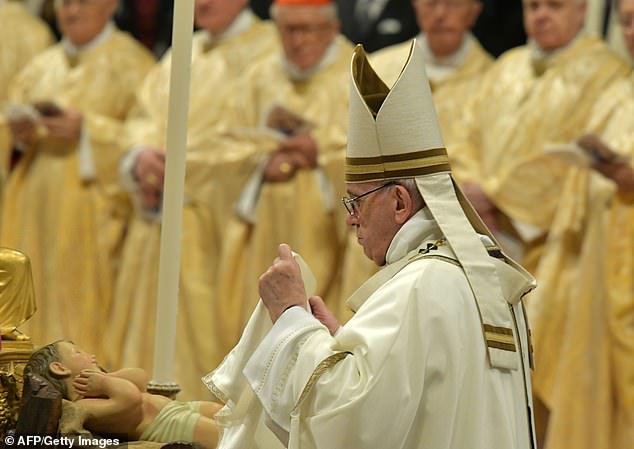 The pontiff uncovers a figurine of baby Jesus during a mass for some 10,000 worshippers 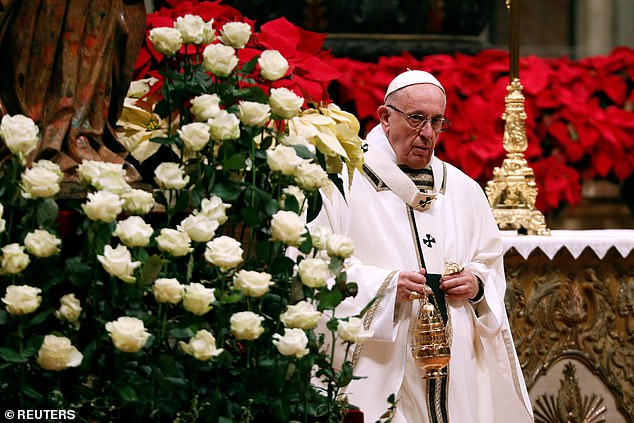 The Pope leads the Christmas Eve mass, one of the highlights of the Vatican’s liturgical year