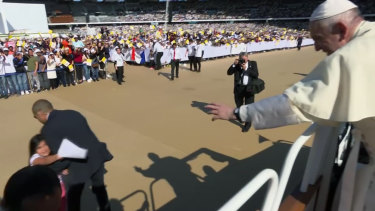 Pope Francis reaches for a letter from a girl who has broken through police barriers, in Abu Dhabi,Credit:AP

"It is true … there have been priests and even bishops who have done this,'' Francis said. ''I think it is still going on because something does not stop just because you have become aware of it.

"We have been working on this for a long time. We have suspended some priests because of this," he said, adding that the Vatican was in the process of shutting down a female religious order because of sexual abuse and corruption. He did not name it. 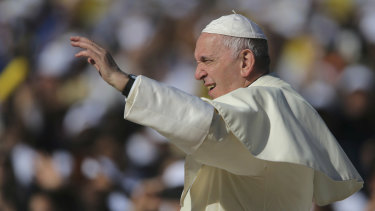 Pope Francis blesses worshippers during a Mass at the Sheikh Zayed Sports City in Abu Dhabi.Credit:AP

Francis, speaking after his historic three-day visit to the Gulf, said former Pope Benedict had dissolved a religious order of women shortly after his election as pontiff in 2005 "because slavery had become part of it [the religious order], even sexual slavery on the part of priests and the founder".

He did not name the group but Vatican spokesman Alessandro Gisotti said it was a French order.

Before he became pope, Benedict was Cardinal Joseph Ratzinger, the head of the Congregation of the Doctrine of the Faith, the Vatican department that investigates sexual abuse. The pope at the time was John Paul.

Then-cardinal Ratzinger wanted to investigate the religious order in which women were being abused but he was blocked, Francis said, without saying who prevented the probe.

After he became pope, Ratzinger reopened the investigation and dissolved the order, Francis said.

Pope Francis has summoned key bishops from around the world to a summit later this month at the Vatican to find a unified response on how to protect children from sexual abuse by clergy.

Asked if there would be some kind of similar action to confront abuse of nuns in the church, he said: "I want to move forward. We are working on it."