POPE for the best! Pontiff warns about the dangers of ‘pessimism’ as world emerges from lockdown in first noon address to St Peter’s Square in three months

Pope Francis advised people not to be pessimistic as the world makes a slow departure from the coronavirus lockdown and adjusts to a new way of life during his first noon address for three months.

During Mass in St Peter’s Basilica, Vatican City, to mark Pentecost Sunday, Francis departed from a prepared script – speaking of how people are more important than the economy as countries prepare to reopen.

Standing in his window he noted people’s tendency to say ‘nothing will return as before’ and that that kind of thinking, he said, guarantees ‘the one thing that certainly does not return hope’. 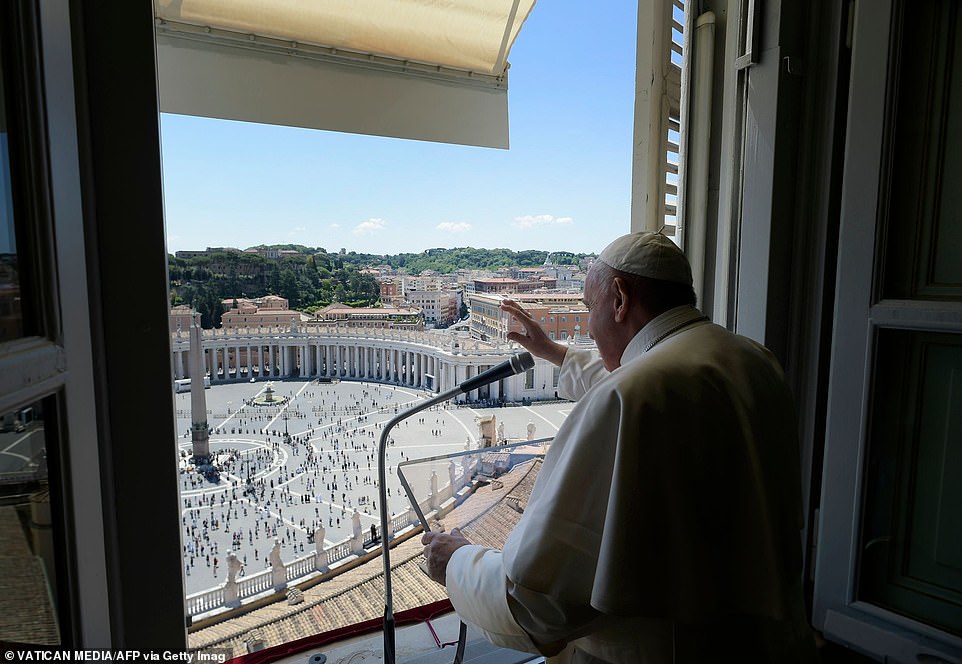 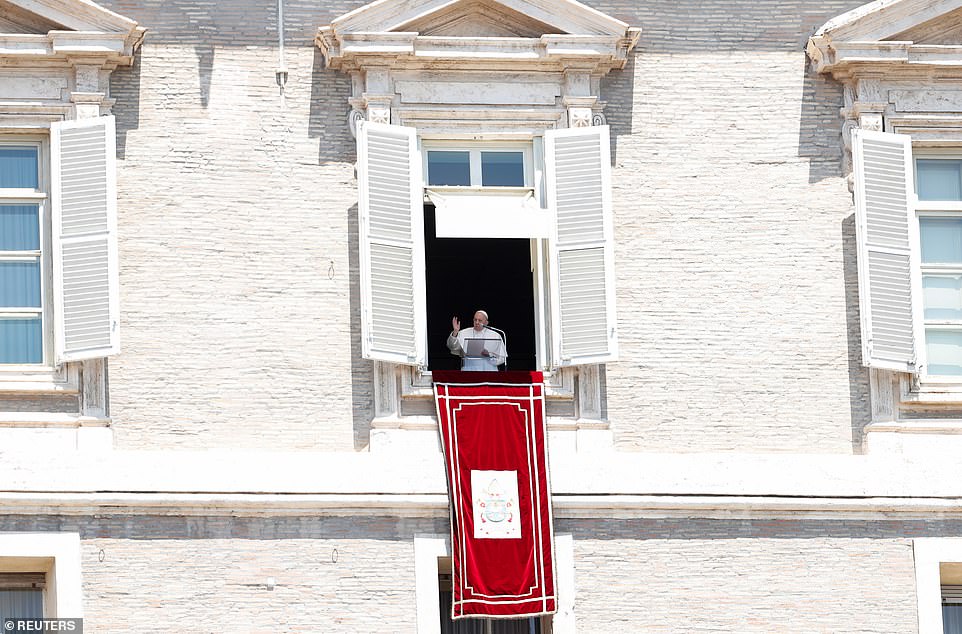 Speaking from a window, Francis departed from a prepared script encouraging people not to be pessimistic as we enter into a new post-coronavirus era

During the address, which was possible for the first time in three months as Italy’s lockdown draws to an end, he took to task his own church for its fragmentation, saying it must pull together.

‘The world sees conservatives and progressives,’ he said, but instead all are ‘children of God’.

Instead of being pessimistic about the future holds, Francis told the faithful to focus on what unites them, he added: ‘In this pandemic, how wrong narcissism is.

‘The tendency to think only of our needs, to be indifferent to those of others, and to not admit our own frailties and mistakes.’ 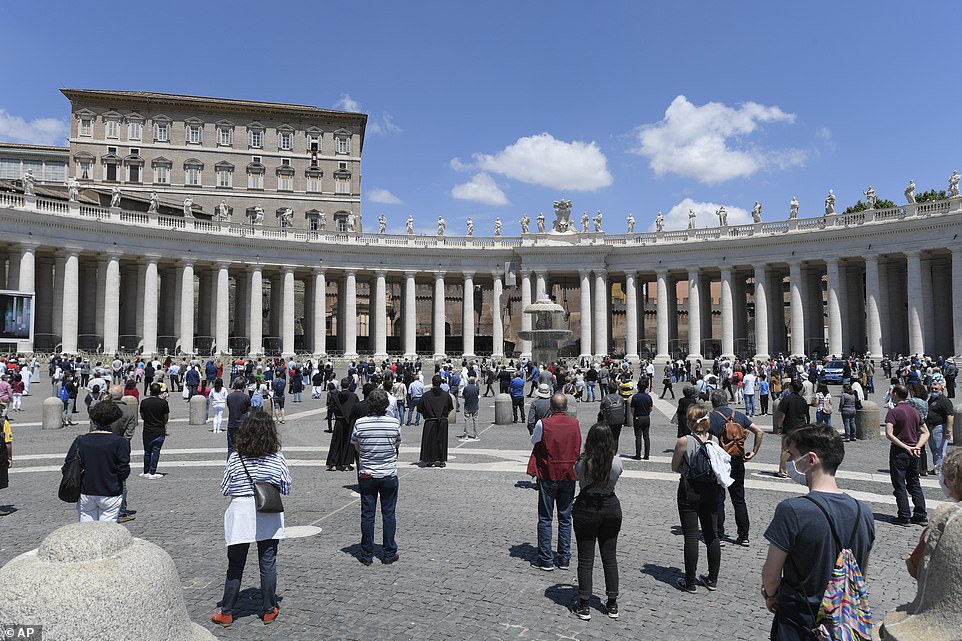 Pope Francis was greeted by people in St. Peter’s Square as he resumed his practice of speaking to the faithful there for the first time since lockdown began in Italy 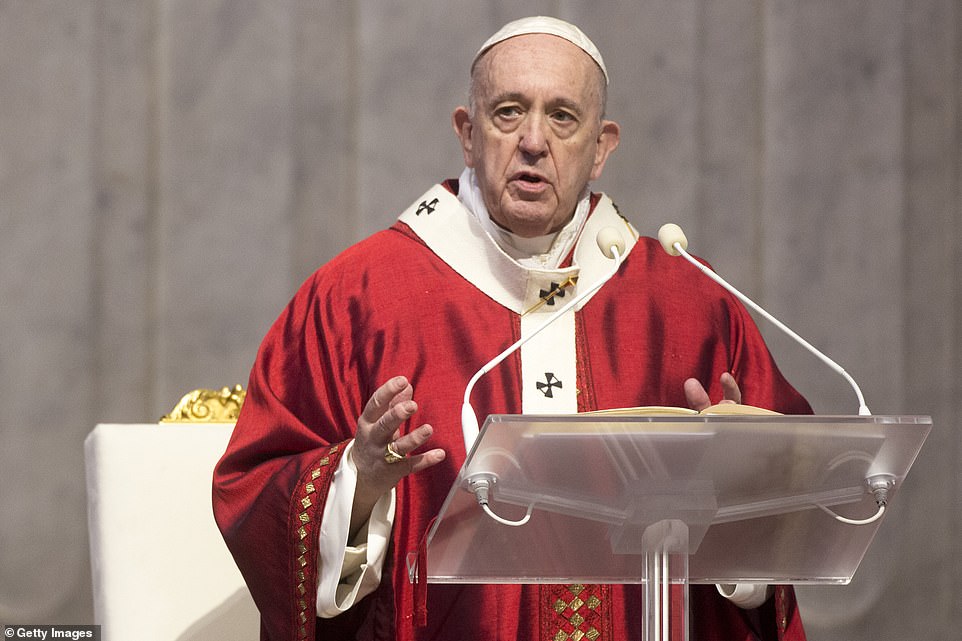 Pope Francis celebrated the Solemnity of Pentecost with a Mass in St. Peters Basilica, with a limited number of the faithful in attendance

Francis did not mention any countries. Many governments are deciding whether to reopen their economies to save jobs and living standards, or whether to maintain lockdowns until they are sure the virus is fully under control.

The pope’s words were met with applause by hundreds of people in the square, many of whom wore masks and kept several metres from each other. The square was reopened to the public last Monday. Normally tens of thousands attend on a Sunday.

While the Vatican has reopened the basilica to tourists, the rank-and-file faithful are still not allowed to attend Masses celebrated by the Pope to avoid crowding.

The last time the pope delivered his message and blessing from the window was March 1, before Italy, where more than 33,000 people have died from the virus, imposed a lockdown. The last restrictions will be lifted on Wednesday.

Francis led the crowd in silent prayer for medical workers who lost their lives by helping others.