A mother whose eight-year-old daughter posted a touching Father’s Day letter addressed to her father in heaven has told how she was overwhelmed when it was returned to her by a kind-hearted postman.

The postman, who lost his own father last year and does not wish to be named, managed to track down Sarah Tully after making a Facebook appeal – fearing the letter would have been thrown away.

The letter, which was written by Sianna Tully and posted in the evening on Father’s Day, was found in a postbox in Braunstone, Leicester the next day – and was addressed ‘To Daddy’ in ‘Heaven, Cloud Nine’.

The postman posted a picture of the envelope on Facebook, where it attracted thousands of comments. Within 15 minutes, he had been put in touch with Miss Tully, and arranged to take the letter to her. 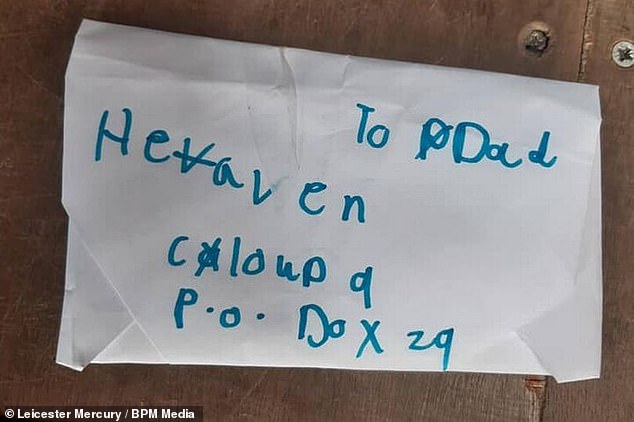 He told the BBC he was ‘taken aback’, adding: ‘Obviously without a stamp or an actual address on it, if it got put in with the rest of the stuff to be delivered it would just end up getting thrown away in transit somewhere.

‘I spoke to my manager and asked if I could try to get hold of the family to find out more about it and get it back to them.’

Miss Tully said she was ‘overwhelmed’ by the social media reaction and has decided to keep the unopened letter in a special box for Sianna when she is older.

She told Leicestershire Live that Sianna was just four months old when her father Tony Tully passed away, and had ‘really struggled’ without him.

The postman’s Facebook appeal states: ‘I’m a postman in the Braunstone area. Earlier today I emptied the red pillar box on Bewicke Road and there was a letter in a child’s handwriting addressed to their dad in Heaven, Cloud 9’

Sianna learned to cope by writing him letters and posting them to him, telling him that she loves him and misses him, Miss Tully said.

‘She was so small and she’s only just starting to understand,’ she said. ‘I think this year it might have hit her the hardest because she was more emotional.’

Miss Tully went on: ‘I am absolutely overwhelmed by the response of the postman and of everyone who has seen the post.

‘I haven’t stopped crying since. I never thought for one second that anyone would find it or do anything with it. I just thought it would go in the bin.’

The postman’s Facebook appeal states: ‘I’m a postman in the Braunstone area. Earlier today I emptied the red pillar box on Bewicke Road and there was a letter in a child’s handwriting addressed to their dad in Heaven, Cloud 9.

‘I’m trying to find the parents of the child as I would like to reach out to them and with their permission sort out a little something for the child.

‘I myself lost my dad last year and as an adult found it hard, so I can only imagine what this child is going through.’