YouTuber ‘Jarvo’, who has 21 convictions including a prison term for various pranks, necked free beer after easily hiding a phone in the Match of the Day studio, bragging: ‘There was no one to stop us’.

The BBC is investigating how he walked on to Gary Lineker’s set – but West Midlands Police decided that no crime was committed despite him spending 90 minutes wandering inside the Premier League stadium.

Jarvis, who claims he strolled in with the BBC crew, said today: ‘We got in because we made it look like we were meant to be there, so no one bats an eyelid’. 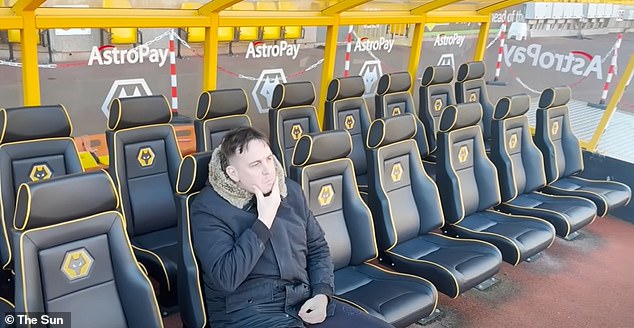 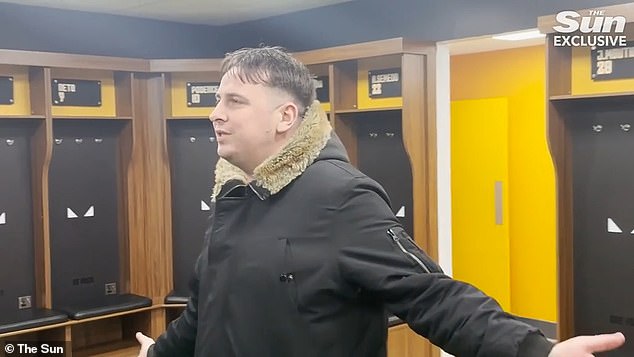 He even was able to walk into the home dressing room in a security breach that will worry Wolves, the FA and the Premier League 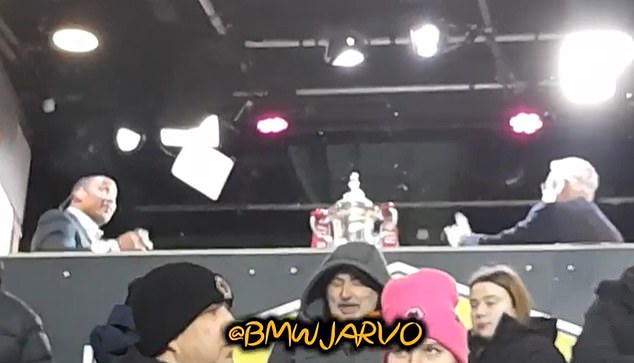 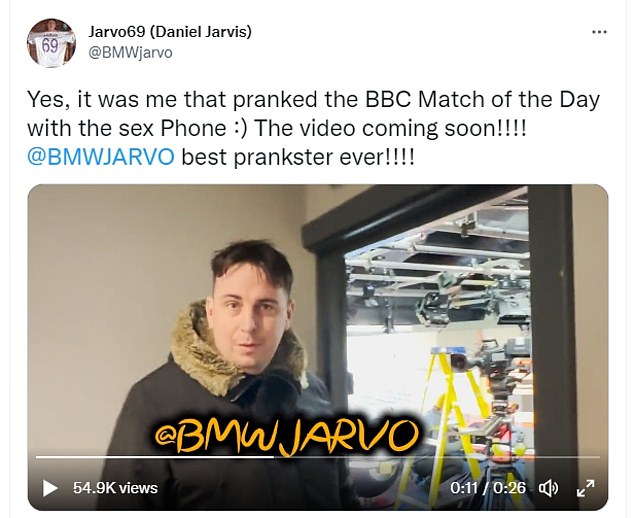 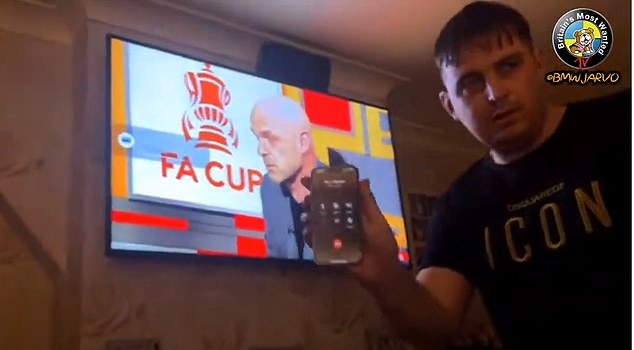 MailOnline revealed yesterday that he made a mockery of security at Molineux and just walked in with a friend from Manchester before sticking the phone on the studio wall and raiding the free bar for some lagers. 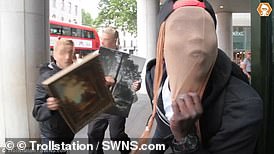 Today in a new interview and video, the Kent prankster shared images of him posing in the stadium’s dugouts and walking around the pitch. He was also able to wander freely around the home and away dressing rooms, using the toilets and claiming he almost used Wolves’ ice bath but couldn’t find a towel.

In an account that will worry Wolves and  the Premier League, Jarvis said that he walked into the stadium on Monday with the BBC crew preparing for the live FA Cup broadcast on Tuesday night. He claims that the BBC thought he worked for Wolves, but ‘people from Wolves thought we were with the TV’.

He said that the phone with the sex noises ringtone was £20 and has the loudest volume on the market.

‘So we strapped it to the top of the wall and because of the colour no one could see it. We had a cheers with the beers afterwards then it was a waiting game, hoping no one had found the phone’, he told The Sun.

‘Staff didn’t say anything. I was tempted to jump in the home changing room ice bath but didn’t have a towel. I also used the toilet in the away dressing room, which is terrible — it’s like a PE changing room from the ’90s. After we planted the phone, we had a beer and got out.’

He said that he tested it at 1am on Tuesday and then called it 10 times during Gary Lineker’s broadcast using a ‘burner phone’ from his cousin’s house, believed to be in Kent.

Mr Lineker has spoken out again the prank, and revealed that he was so tickled by it he kept trying to think of innuendos to drop into his broadcast.

He told The Sun: ‘At half-time every question I asked about the analysis, my comments were some kind of reference to it.

‘Things like ‘Wolves huffed and puffed’ or ‘the only goal was a screamer — and not the only screamer we had’, and ‘Liverpool pressed really hard in trying to get behind them’ — all that kind of thing’.

He added: ‘It’s a security issue, and there is a serious side to it; if someone can do that, they can do something else with something that could be more dangerous. But, in this instance, I felt that universally people were finding it really funny’.

A friend from Manchester apparently drove down to pick Jarvis up from his £200,000 home in Gravesend on Monday morning.  They then went north to Wolverhampton so they could hide a phone in the BBC’s temporary studio before raiding the free bar.

Describing what happened at the Premier League stadium, Jarvis, known as Jarvo69 on YouTube, said: ‘All the boxes were open and we just walked in there – there was no one to stop us. We both had a Corona and just chilled out’. 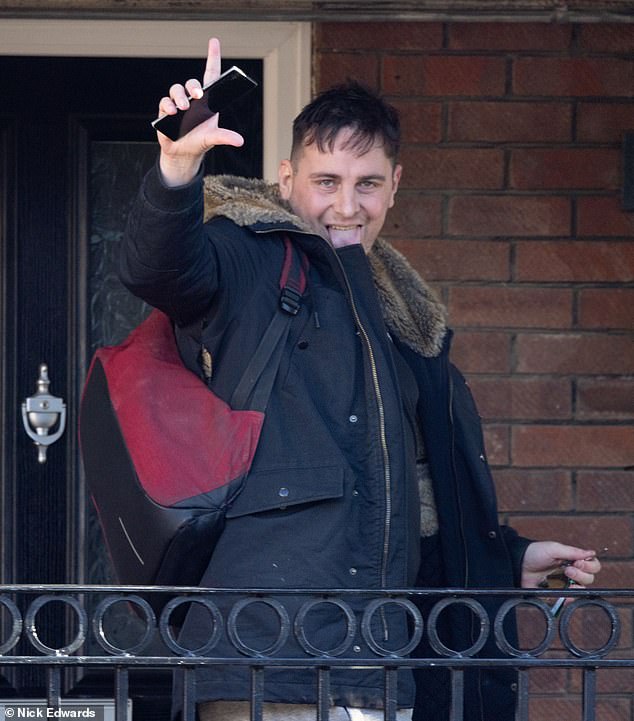 A judge handed Jarvis, who has 21 convictions for multiple stunts, a two-year ban from all UK sports stadiums last September after he disrupted an England test match a year earlier when he ran on the pitch and crashed into talisman Jonny Bairstow.

But the ban is only in force in the hour before kick off until an hour after the match ends, so he went to Molineux in the afternoon instead.

In a major security breach, YouTuber Daniel Jarvis managed to get into Wolverhampton Wanderers’ Molineux stadium and tape the mobile to furniture on set.

The embarrassing moaning noises began shortly after the Match of the Day’s coverage started on BBC1, leaving the pundits visibly confused and viewers incredulous, especially those watching with children.

Lineker said afterwards that it was a ‘good prank’ and quite amusing, and that the BBC should not have to apologise. But the fact Jarvis was able to get on to a set and plant a phone raises major security questions over the corporation’s outside broadcasts.

Jarvis, from Gravesend, Kent, whose multiple pitch invasions have led to arrests, posted a picture of himself outside the studio as it was being built in recent days.

MailOnline can reveal that last year Jarvis was banned from all UK sports stadiums for two years – from an hour before any event begins through to an hour after it has concluded. He appears to have bypassed this by visiting Molineux to hide the phone earlier yesterday. 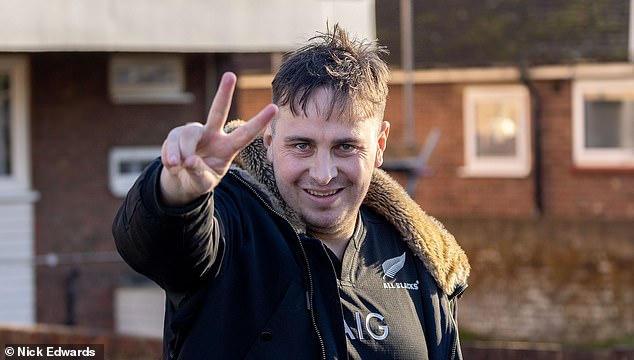 Jarvis gives the victory sign to the press yesterday 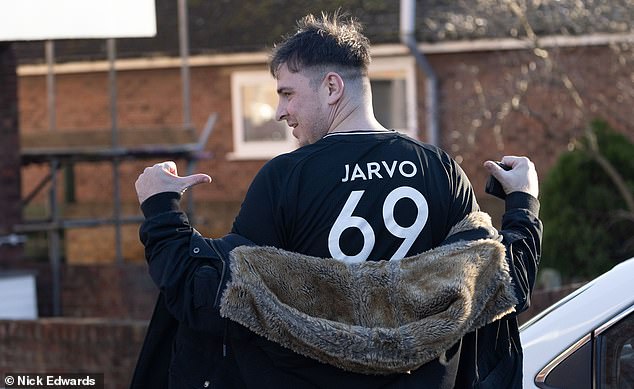 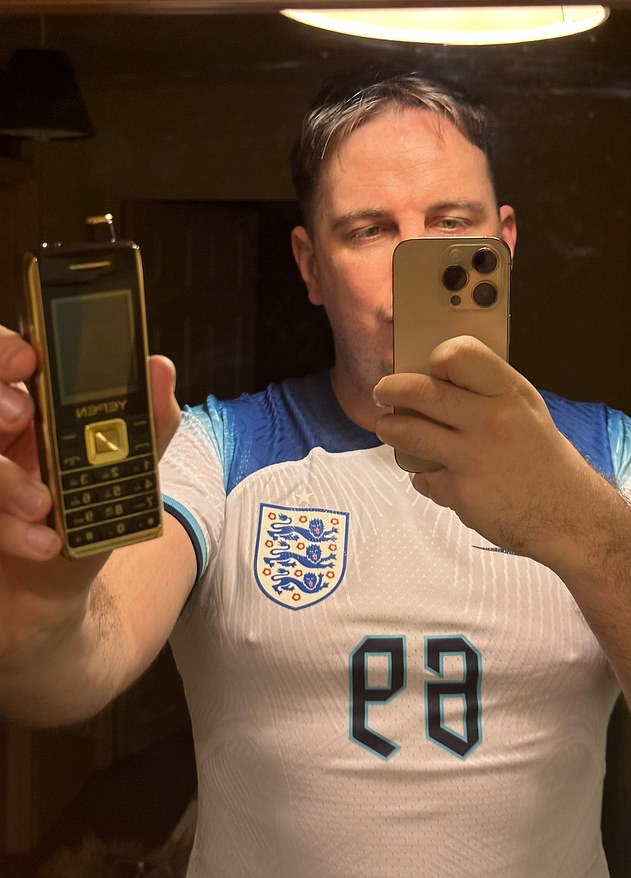 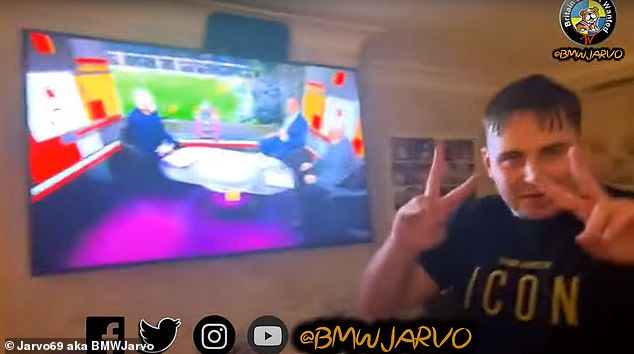 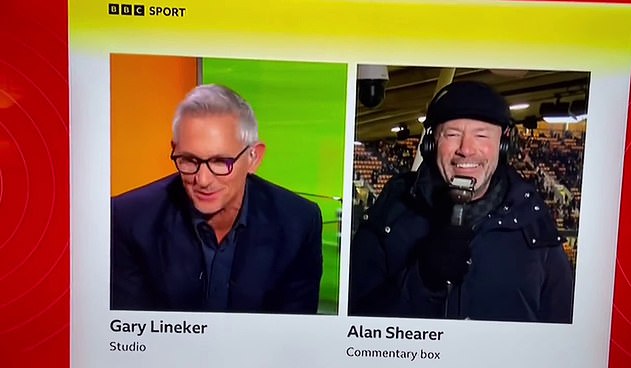 Lineker and Alan Shearer appeared to be tickled by the prank, with Shearer joking that it was all Danny Murphy’s fault. The BBC quickly cut away for a pre-match interview with Jurgen Klopp, but after returning to the studio the noises continued to disrupt the show for around ten minutes.

It is not yet known how Jarvis managed to get into Molineux stadium and tape the mobile to the set.

Jarvis, 34, whose stunts have led to 21 convictions, plotted the escapade at his £200,000 housing association flat in Gravesend, Kent.

He is said to spend hours locked in his upstairs bedroom at the 1960’s block of flats where he lived with his step-dad and mother Denise, who died from cancer last year.

Daniel’s pal, called Tommy, is believed to have driven down from Manchester before picking Daniel up from his home at 10am yesterday.

They drove to Wolverhampton Wanderers’ Molineux ground before sneaking into the stadium and making their way to the BBC studios.

His step-father, Tony, told MailOnline: ‘He just went out with his bag yesterday then he was gone.

‘He obviously planned this very carefully but he didn’t say a word to me.

‘He still hasn’t said much. He just does his bit then you hear about it afterwards.’ 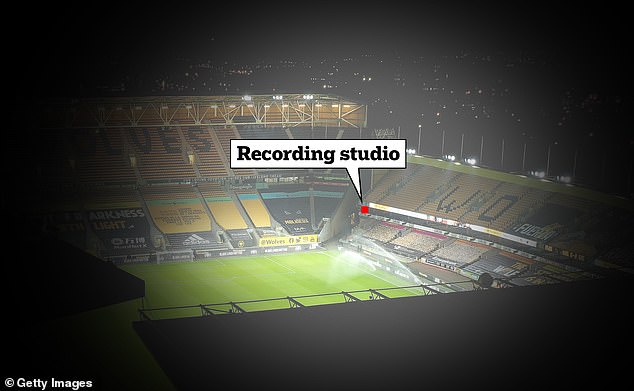 MailOnline understands that the prankster managed to get into the studio on Monday, according to his stepfather 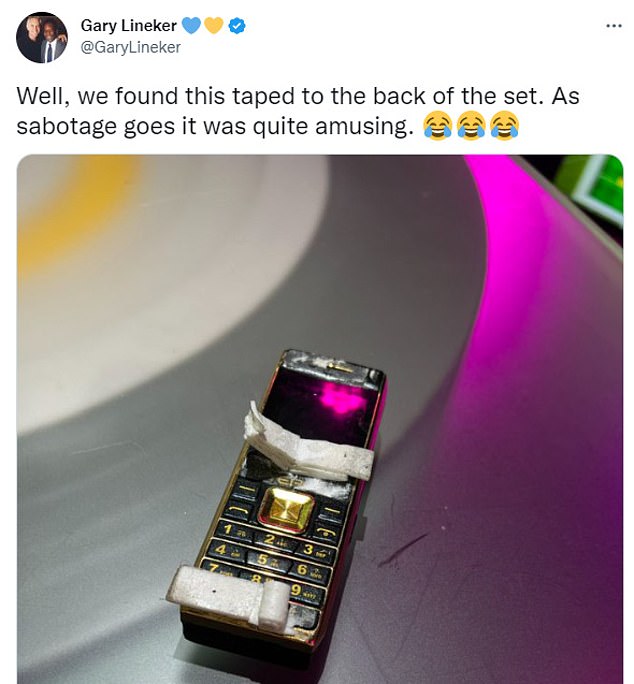 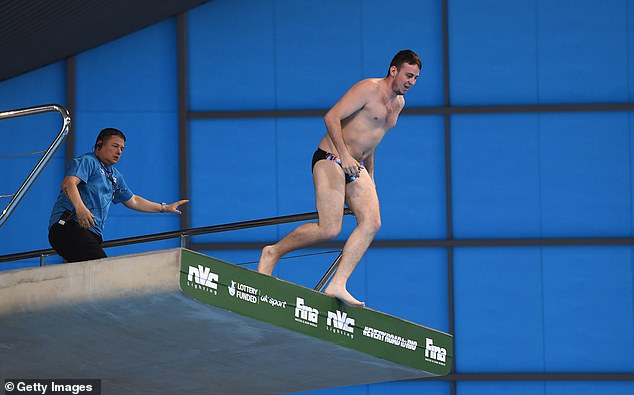 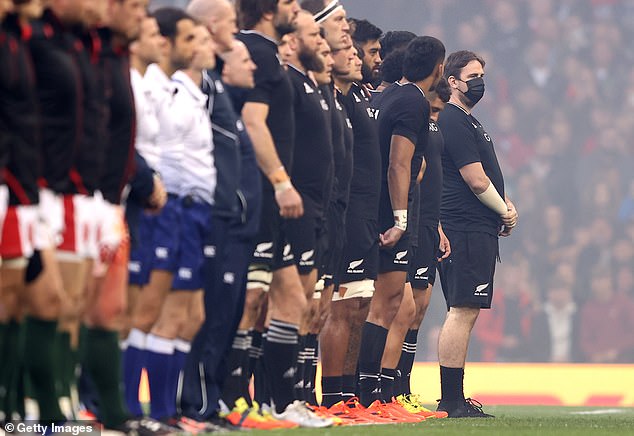 Jarvo, in a mask, joins the New Zealand team for the anthem ahead of a match between Wales and New Zealand at Principality Stadium on October 30, 2021 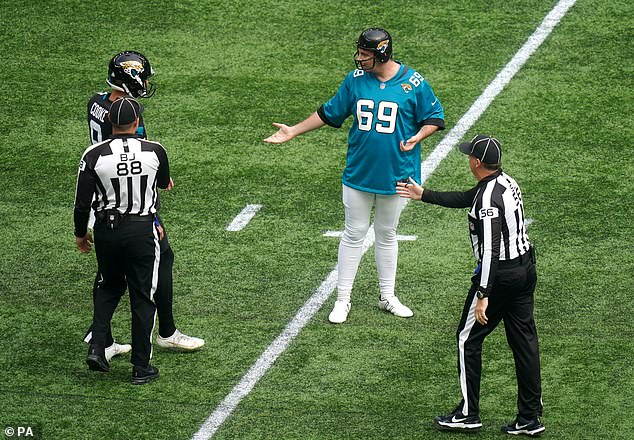 Daniel Jarvis, known as Jarvo 69, is confronted by Jacksonville Jaguars’ Logan Cooke (left) as he invades the pitch during the NFL match at Tottenham Hotspur Stadium on Sunday October 17, 2021