Prince Andrew is ‘broken’ after his ‘reputation was left in tatters’ by £12million settlement with rape accuser Virginia Giuffre, claims old military friend

Prince Andrew is reported to be ‘broken’ after his ‘reputation was left in tatters’ following the multi-million pound out-of-court settlement with his accuser Virginia Giuffre, his old military friend has claimed.

A source said the Duke of York, who turned 62 last Saturday, has been struggling with the public humiliation of the £12million sex case settlement.

Before the case was settled, the Queen decided to strip her son of his remaining military affiliations and patronages and forced him to stop using the His Royal Highness title in any official capacity.

However, a source said Prince Andrew was allowed to keep his title of Vice Admiral in a bid to cheer him up.

The source – who served with Prince Andrew during the Falklands War – told the Mirror: ‘He is down, he is broken. If he wants to dress up once in a while in a naval uniform, then let him.

‘His reputation is in tatters, his public life is over. He is a walking embarrassment.’ 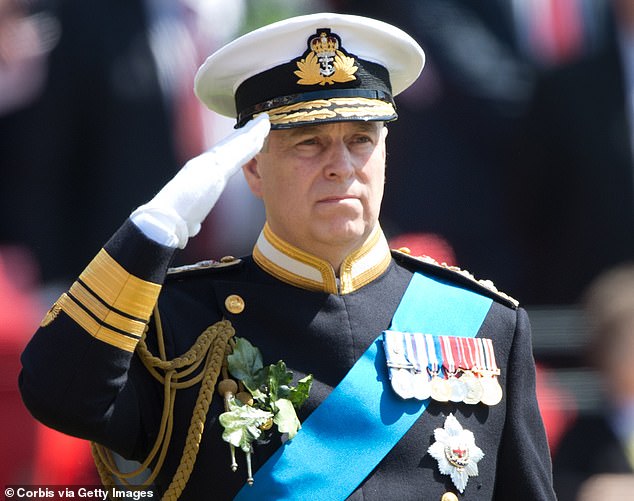 A source, who served with Prince Andrew during the Falklands War, said the duke is ‘broken’ after agreeing an out-of-court settlement with his accuser Virginia Roberts and claims he was allowed to keep his title of Vice Admiral in a bid to cheer him up

The Vice Admiral rank is Prince Andrew’s only armed forced honorary title and is the equivalent of an Army Lieutenant General, which the source said was ‘effectively the same as an honorary degree’ for serving in the Royal Navy during the Falklands War.

The source described Andrew as ‘actually not a bad person’ when they knew him, but said he had a ‘few entitlement issues’.

They added: ‘He hasn’t been convicted of anything. I have no idea whether he is guilty or innocent, so I think he has paid quite a heavy price.’

Ms Roberts and Andrew reached an out-of-court settlement earlier this month, but questions remain over whether the Queen – who is said to favour Andrew – is helping him foot the bill, which includes a £2million donation to Ms Roberts’ charity, which helps victims of sexual assault and trafficking.

Despite vowing to fight Ms Roberts’ allegations directed against him in the civil case filed in New York – and repeatedly protesting his innocence – Andrew agreed to pay the large sum to settle the case before it reached a jury.

The Telegraph reported the total amount that the victim and her charity will receive will actually exceed £12m, with the funds coming from her private Duchy of Lancaster estate, which recently increased by £1.5m to more than £23m.

Although the agreement contained no formal admission of liability from Andrew, or an apology, it said he now accepted Ms Roberts was a ‘victim of abuse’ and that he regretted his association with Epstein, the disgraced financier who trafficked countless young girls. 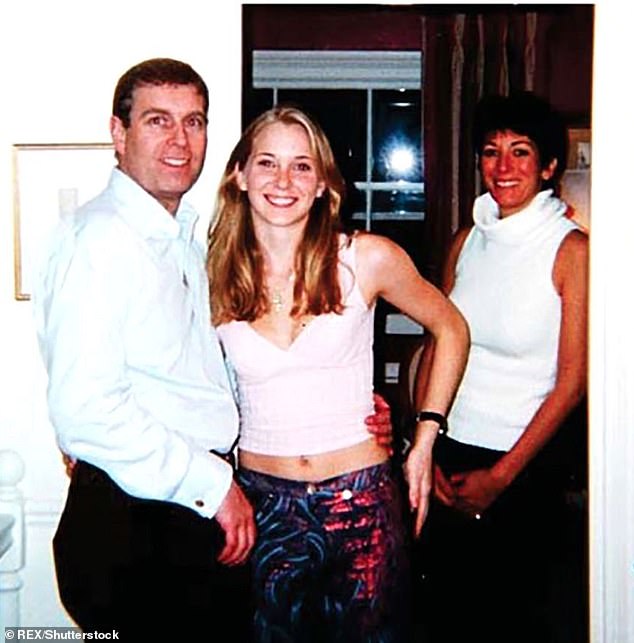 Andrew and Ms Roberts (pictured together, alongside Ghislaine Maxwell in 2001) reached an out-of-court settlement earlier this month

A statement announcing the settlement read: ‘Virginia Giuffre and Prince Andrew have reached an out of court settlement.

‘The parties will file a stipulated dismissal upon Ms Giuffre’s receipt of the settlement (the sum of which is not being disclosed). Prince Andrew intends to make a substantial donation to Ms Giuffre’s charity in support of victims’ rights.

‘Prince Andrew has never intended to malign Ms. Giuffre’s character, and he accepts that she has suffered both as an established victim of abuse and as a result of unfair public attacks. It is known that Jeffrey Epstein trafficked countless young girls over many years.

Ms Roberts – who brought the lawsuit under her married name Virginia Giuffre – launched her legal action against Andrew in August, seeking unspecified damages for battery, including rape, and the infliction of emotional distress.

Her legal team were said to be surprised at the suddenness of Andrew’s decision to settle the case.

The prince, who was stripped of his remaining patronages earlier this year, had faced pressure from senior royals to resolve the lawsuit ahead of the Queen’s Platinum Jubilee later this year.

And while Buckingham Palace was said to be breathing a sigh of relief that the case would not go to trial, senior royal sources indicated there was now no way back to public life for the disgraced duke.