Prince Harry’s nightclub boss friend has racked up a £35,000 legal bill after a court battle with a millionaire polo player and his weather presenter wife.

Howard Spooner, 50, ran a string of London venues with Guy Pelly, another friend of the Duke of Sussex, but was unsuccessful in recouping funds from associates over a failed joint venture for a posh hotel.

Mr Spooner, Charles ‘Brook’ Johnson and Sally Faber Johnson agreed over a lunch to become equal partners in The George, a prestigious 17-bed townhouse on the Isle of Wight.

However, the relationship turned sour after they fell out over spending, Swindon County Court heard.

Mr Spooner’s barrister, Josh Lewison, told the court the two men agreed Mr Johnson, 73, of Marlborough, Wiltshire, would stump up £150,000, with £65,000 paid immediately and the remaining £85,000 invested as and when it was needed.

This account was disputed by the Johnsons, however, with Charles’ wife Sally, 55, claiming she had bought furniture with the £85,000 which had been loaned to the hotel.

Attempts at mediation between the partners came to nothing and the case ended up in court.

Emma Williams, for Sally Johnson, alleged the flamboyant nightclub owner had tried to exclude her husband from the management of the company and transfer £100,000 out of the hotel company bank account into the account of a firm controlled by him alone.

On March 20, the Johnsons’ solicitors sent Mr Spooner a pre-action letter, to which he replied claiming to be owed £85,000, telling lawyers their clients should ‘come to the table to buy out, sell out or stump up what they owe’.

The solicitors responded on March 24 warning the claimed debt was disputed.

Mr Spooner issued a formal statutory demand for the cash on behalf of the firm on March 27, effectively warning the Johnsons they could be hauled before the courts if they did not pay up.

A month later, he issued a second statutory demand for payment for £16,612 plus interest, which it was claimed was owed to a directors’ loan account.

This was served on both Johnsons and a company jointly owned by the couple, Sarcen Ltd.

The Johnsons’ lawyers had been preparing to fight both demands for payment and a hearing was fixed.

But last Thursday, five days before the hearing – Mr Spooner withdrew the demands.

And in a two-hour hearing on Tuesday he was ordered to pay £35,000 in legal costs to the Johnsons.

Ms Williams, for the couple, argued that the celebrity club owner had acted improperly in making the demands for payment, describing his conduct throughout the legal proceedings as ‘utterly deplorable’, and that he should have known he did not have the relevant authority to do so.

It was also alleged that Mr Spooner sent Mrs Johnson WhatsApp messages that were ‘tantamount to blackmail’. 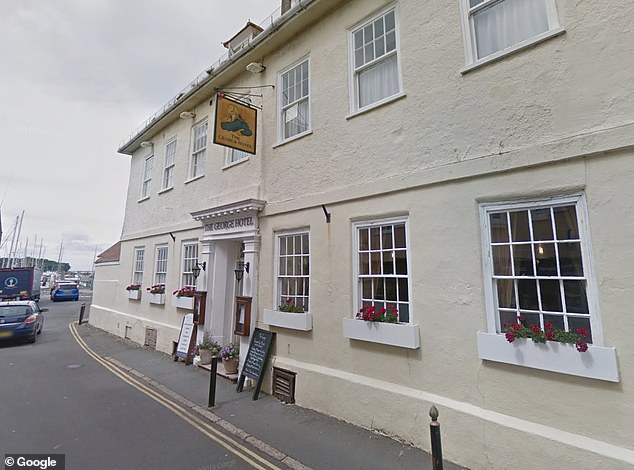 The trio agreed over a lunch to become equal partners in The George, pictured, a prestigious 17-bed townhouse on the Isle of Wight, but the relationship turned sour after they fell out over spending

One of which appeared to suggest he would sell the alleged debt to ‘your daughter’s drug dealer’, adding: ‘Somebody else can come and collect it from you. I’m bored of trying to get you to be honest and reasonable.’

Josh Lewison, for Mr Spooner, said his client had been trying to do his best for the company in trying to collect what he saw as a debt owed by his former business partners.

He argued the money would ensure the hotel could come out of the lockdown period in a comparative financial good health.

He added: ‘In this case Mr Spooner was not going to derive any personal benefit from the litigation. He was simply trying to collect a debt he saw as due for the company.’

Contrary to the claims of the Johnsons, Mr Lewison said his client genuinely believed he had the authority to issue demands for payment and that it was Mr Spooner being threatened with warnings by the couples’ lawyers.

Deputy District Judge Napier acknowledged he was not being asked to rule on whether the statutory demands should be set aside.

But he told the lawyers in his view Mr Spooner had used the statutory demand process improperly and there were ‘very serious irregularities’ in the administration of the company.

He ruled Mr Spooner should pay a contribution to the Johnsons’ legal costs of £35,000.

Following the hearing, Mr and Mrs Johnson said: ‘Whilst we regret that this dispute had to come to court, we are delighted by the judgment. Deputy District Judge Napier has fully vindicated our position.

‘This is a satisfying conclusion to a challenging period and we look forward to putting it behind us.’