REVEALED: Prisoner, 18, whose baby girl died in her arms had called for help FOUR times and was ignored by three officers – as it emerges ANOTHER baby died in the same jail

A teenage prisoner whose baby died in her arms had called for help four times and was ignored by three officers, according to a watchdog which found a string of failings in her care.

The 18-year-old mother, known as Ms A, should never have been allowed to give birth without medical assistance at HMP Bronzefield in Ashford, Middlesex, prisons and probation ombudsman (PPO) Sue McAllister said.

Ambulance crews were called to the scene in September 2019 but the child did not survive. Police launched an investigation, treating the death as ‘unexplained’.

According to the watchdog’s report, published on Wednesday, Ms A made two internal phone calls and pressed her bell twice to ask for a nurse before giving birth.

The first call lasted around one minute while the second, made 25 minutes later, went through to the communications room and was ‘immediately disconnected’.

Ms A also pressed her bell to tell an officer she needed a nurse and ambulance, then rang again later when no nurse arrived, but received no response.

It has also come to light that another prisoner from HMP Bronzefield gave birth to a full-term stillborn baby in an ambulance on the way to hospital, in December 2017.

In addition, there have been two other unexpected births at the prison – one in October 2017 and one in March 2019. One baby required neonatal intensive care in hospital but survived.

No less than 10 separate investigations have been launched into the latest incident, with the PPO conducting the overarching probe.

A pathologist has been unable to determine whether the baby was born alive or was stillborn, and so far no inquest has taken place.

The findings highlight a catalogue of ‘troubling weaknesses’ in the way the prison and healthcare services handled the mother’s care and makes a series of recommendations for improvements in the care of pregnant prisoners. 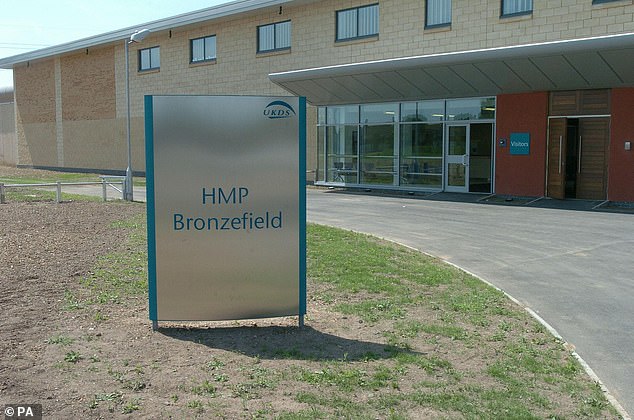 The 18-year-old mother on remand, known as Ms A, should never have been allowed to give birth without medical assistance at HMP Bronzefield (pictured above) in Ashford, Middlesex, prisons and probation ombudsman (PPO) Sue McAllister said

Ms A had a ‘traumatic childhood’ and was on remand in prison for the first time, facing a charge of robbery. The findings said she was regarded as vulnerable, ‘sad, angry and very scared’ that her baby would be taken away from her.

She engaged ‘minimally or not at all’ with the midwifery team at Ashford and St Peter’s Hospitals NHS Trust (ASPH) in Surrey, and all ante-natal care, including refusing to attend appointments for scans.

The report states that a prison officer, referred to as PCO 4, ‘answered a cell call from Ms A who said “get me a f***ing nurse”‘ at 8.07pm.

It continued: ‘PCO 4 said he asked her why she needed one, but she would not tell him. He said he did not know Ms A.

‘She was rude and abusive and did not sound in distress. The call lasted for one minute five seconds.’

A second call came in at the same time, queuing Ms A’s call, with the officer saying he was then called to another house block to attend a prisoner who had self-harmed.

The officer said he told another member of staff, known as PCO 3, that Ms A wanted a nurse, but PCO 3 said he could not remember any information being handed over by PCO 4 that evening or speaking to the prisoner.

Ms A made another call at 8.32pm, but this was not answered so went through to the communications room.

The report says: ‘The records showed that Ms A’s call was answered in the communications room at 8.45pm and immediately disconnected.’

It adds: ‘[Ms A] said she pressed her bell and asked for a nurse and the officer asked her why she needed one.

‘She said she told him that she needed help and a nurse and an ambulance. She rang again a bit later when no nurse came but got no reply. After that she gave up.’

The report found ‘some similarities’ between births from other HMP Bronzefield prisoners and that of Baby A. 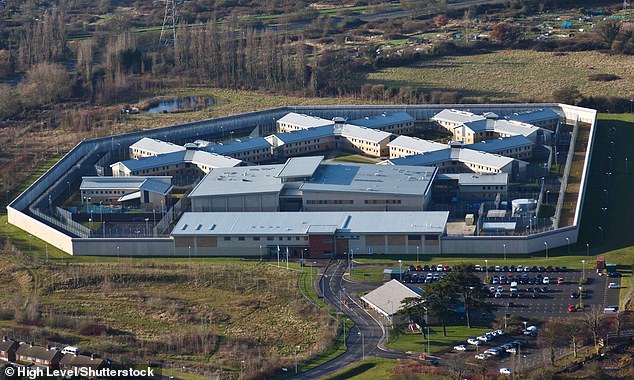 An aerial view of HMP Bronzefield, taken in 2012. According to the watchdog’s report, published on Wednesday, Ms A made two internal phone calls and pressed her bell twice to ask for a nurse before giving birth

It states: ‘There have been two previous unexpected births at Bronzefield, one in October 2017 and one in March 2019. Both babies were delivered by prison nurses in the prisoner’s cell.

‘The baby born in October 2017 required neonatal intensive care in hospital but survived. In addition, in December 2017, a full-term stillborn baby was born in an ambulance on the way to hospital.

‘We found some similarities across these cases with the birth of Baby A.’

According to the report, staff at Bronzefield appeared to regard Ms A as ‘difficult and having a ‘bad attitude’, rather than as a vulnerable 18-year old, frightened that her baby would be taken away’.

Ms McAllister said: ‘Ms A gave birth alone in her cell overnight without medical assistance. This should never have happened.’

Ms A fell unconscious at around 2am, waking to find she had given birth but the newborn was purple and not breathing.

She then bit through the umbilical cord and got into bed with the baby before two other prisoners raised concerns.

All pregnancies in prison should be treated as ‘high risk’ because the women are ‘locked behind a door for a significant amount of time’, she said, adding that there was likely to be a higher percentage of ‘avoidant’ mothers who were ‘fearful of engaging with maternity care’.

Prisoners do not have direct access to their midwives, compared to pregnant women who are not in custody.

The report found maternity services at Bronzefield were ‘outdated and inadequate’ with limited visits from health professionals. 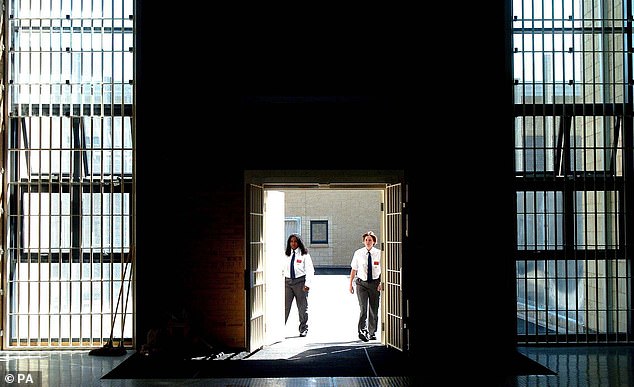 No less than 10 separate investigations were launched into the incident, with the PPO conducting the overarching probe (file photo of HMP Bronzefield)

Although Ms A was considered a ‘challenging person to manage’, the approach to her care by midwives was found to be ‘inflexible, unimaginative and insufficiently trauma-informed’, while there was no plan for dealing with a pregnant woman who refused to accept the usual procedures.

There was also ‘lack of clarity’ about the due date, and staff working on Ms A’s block did not know she might give birth imminently.

In the days leading up to the birth, there were ‘several missed opportunities’ to increase observations which might have led to her labour being discovered, the findings said, adding that the response to her request for a nurse the day before was ‘completely inadequate’.

Elaine Macdonald, of Tuckers Solicitors, who represents Ms A, described the failings identified in the report as ‘truly shocking’, and said: ‘The number of significant concerns raised about her treatment while in custody need to be urgently and fully examined.’

Justice Secretary Dominic Raab described the events as ‘harrowing, unacceptable and should never happen to any woman or child’.

He added: ‘We have put in place important improvements to the care received by women in custody, and across government we must make sure that expectant mothers in prison get the same support as those in the community.’ 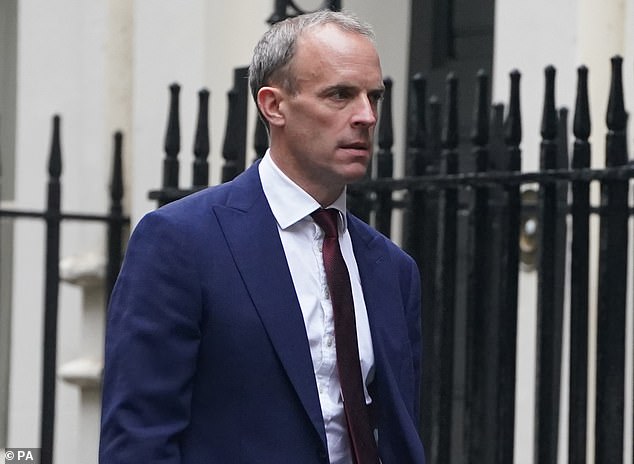 Justice Secretary Dominic Raab (pictured above) described the events as ‘harrowing, unacceptable and should never happen to any woman or child’

The Ministry of Justice (MoJ) stressed it was exceptionally rare for a woman to give birth in prison. Since the death, women have been given phone access to advice services, offered social services support and welfare checks are being carried out for pregnant women in their third trimester, the department said.

The NHS has since taken over the healthcare budget for maternity services at the prison, increasing its budget in this area by 87 per cent and putting an ultrasound scanner inside the jail as part of a range of improvements, a spokeswoman said.

Prison director Vicky Robinson said Sodexo was ‘deeply sorry’ the incident occurred and was ‘absolutely dedicated’ to working with all other bodies involved to address the recommendations and ‘ensure the actions that needed to be taken have been taken’.

The hospital trust’s chief executive, Suzanne Rankin, said: ‘We are deeply sorry for the devastating loss Ms A experienced and the lifelong impact this will have.

‘The ASPH maternity team pride themselves on providing the highest level of care and are deeply distressed by the death in such tragic circumstances of Baby A.’

The trust made a series of changes in light of the death – including providing training and dedicating more staff and resources to this area of care – and will take ‘further action’ as a result of the PPO report, she added.