Pro-Putin rapper deletes music video slamming anti-Kremlin protest rallies after it gathers 1.5MILLION dislikes on YouTube – making it one of the most disliked clips ever on the site

A Russian rapper has deleted a music video in which he literally sang the praises of Moscow authorities after it gathered almost 1.5million dislikes on YouTube.

Timati, a 36-year-old rapper known for his fervent support of President Vladimir Putin, posted the video ahead of contentious Moscow elections on Sunday.

Simply titled ‘Moscow’, the song declares that ‘I don’t go to rallies, I don’t b******t’,’ in a rebuke to the thousands who had protested to demand fair elections after opposition candidates were barred from the ballot.

The video had gained 1.48 million dislikes when Timati took it down on Tuesday, writing on Instagram that he did not intend any offence. 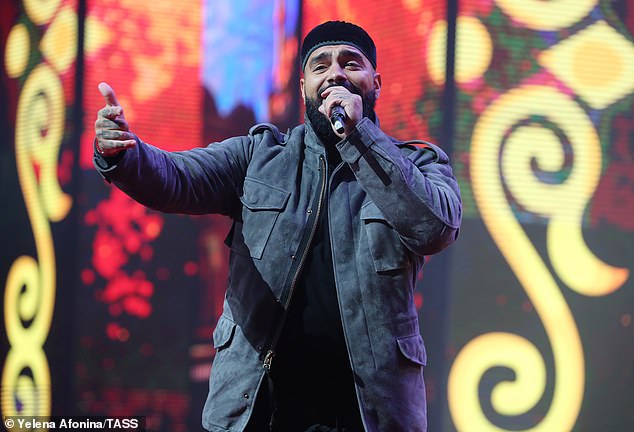 Russian rapper Timati (pictured in a concert last October) declared that ‘I don’t go to rallies, I don’t b******t’,’ in a rebuke to the thousands who had protested to demand fair elections 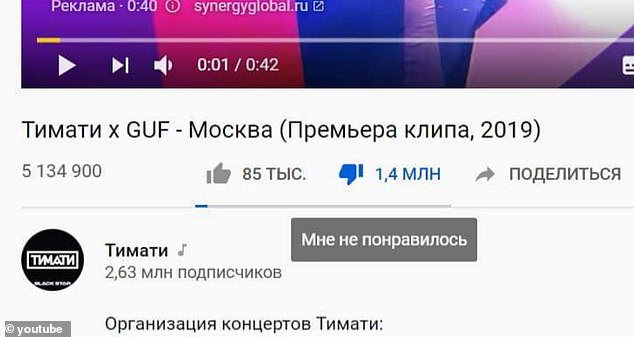 The video gathered almost 1.5million dislikes, compared to less than 100,000 likes, and was deleted on Tuesday

Further lyrics praise the Russian capital as a wealthy city that has become ‘world standard’ and ‘doesn’t hold gay parades.’

‘I will down a burger for Sobyanin,’ the song says, referring to Mayor Sergei Sobyanin, a Putin ally who has been in charge since 2010.

The mayor is detested by the opposition for refusing permission for rallies and cracking down on protesters.

Timati, who is ranked the seventh wealthiest celebrity under 40 in Russia by Forbes magazine, made the video together with another rapper, Guf.

The rapper, real name Timur Yunusov, is known for his support of the Kremlin and in 2015 released a track containing the lyrics ‘President Putin is my best friend’.

‘I’m deleting the video to stop this wave of negativity,’ he wrote. ‘I made a record. Only I didn’t have such a goal.’

‘The world’s first government rapper. I’m sorry for his fans,’ one scathing commenter wrote on Instagram. 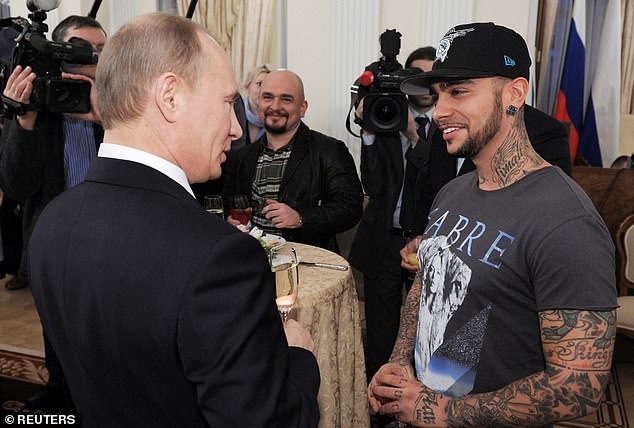 The Moscow protests sparked the Kremlin’s biggest crackdown on dissent since Putin returned to the presidency in 2012.

Police detained several thousand and while most were released quickly, some faced serious charges.

Opposition leader Alexei Navalny, who called the first summer protests after his allies were kept off the ballot paper, put the results down to his calls for tactical voting.

Guf for his part posted an apologetic expletive-ridden video assuring his fans that he was ‘used’ and ‘didn’t get a penny for this, I swear.’

‘I am proud of our young people who understand politics,’ he says. ‘I’m sorry that I don’t follow the political situation in the country.’

The video, which critics have suggested was a paid job ordered by the Russian government, is believed to be the 30th most disliked in YouTube history.

The Russian opposition has accused celebrities of engaging in paid propaganda before.

Last year a wave of nearly identical messages praising the positive changes in Moscow appeared on celebrities’ social media ahead of the mayoral polls swept by Sobyanin.

Other Russian rappers have performed at opposition protests and expressed solidarity with people arrested over the summer.