Probation officers will hold doorstep interviews with released paedophiles, murderers and other serious offenders outside their homes in avoid breaching coroanvirus lockdown measures

Probation officers will have doorstep interviews with serious offenders to keep them amid the coronavirus lockdown.

Officers will be expected to adhere to the ‘two metre rule’ as they conduct interviews at the homes of released murderers, paedophiles and other criminals.

Staff at probation offices, where interviews typically take place, are key workers but are still being encouraged to work from home, the Daily Telegraph reports.

Officers will be able to use their phones – provided the offender remains visible – if they cannot be heard due to the location, meaning some interviews could take place through a window.

Face-to-face interviews will still take place with terrorists, those without phones and for initial appointments.

Offenders considered lower risk will have more frequent supervision – over the phone or through video messaging services.

A probation service spokesman said: ‘The public rightly expects us to have plans to continue keeping them safe whatever the impact of Covid-19 – and that’s exactly what we are doing. 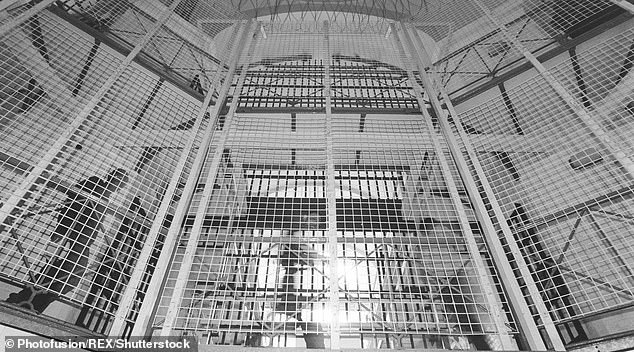 Face-to-face interviews will still take place with terrorists, those without phones and for initial appointments (file image: HMP Winchester)

‘Probation officers will continue supervising in person those who pose the highest risk ensuring the monitoring of high-risk offenders remains as tough as it always is. If staff believe it is the right thing to do, offenders can always be recalled to prison.

‘At the same time, we will use technology more to supervise lower-risk offenders to reduce the spread of the virus. These measures will be regularly reviewed.’

Calls between probation divisions, local authority social services and police forces will be scheduled to maintain the flow of intelligence and review police callouts.

The latest figures, which the Ministry of Justice (MoJ) said was accurate as of 1pm on Wednesday, show that some 19 inmates have now tested positive for coronavirus in 10 different British prisons.

The number of cases has jumped up by six in 24 hours.

Jails in England and Wales were put on immediate lockdown on Tuesday with all visits cancelled as it emerged thousands of staff were in self-isolation.

Jo Farrar, chief executive of the Prison and Probation Service, told the Commons Justice Committee around 4,300 prison and probation staff overall were self-isolating at present.

Some 3,500 were prison staff – representing about 10% of the workforce – and four have tested positive for Covid-19, each in separate jails.

There have been three prisoner escort and custody services staff and eight probation staff who have also tested positive.

Around 50,000 protective masks have been delivered for staff to use and a ban on bringing hand sanitiser into the prison had been lifted.

Justice Secretary Robert Buckland has hinted he may have to consider some forms of early release for prisoners in a bid to ease pressure on jails during the crisis.

Peter Dawson, director of the Prison Reform Trust, said: ‘The risks of infection for people who live and work in prisons are acute, as the Justice Secretary has said.

‘So while it is obviously right that the way of life in prisons should change dramatically, just as it has in the wider community, Robert Buckland is right to be considering forms of early release.

‘In a chronically overcrowded system, this will help keep people safe by reducing the pressure on both space and staff resources.

‘For this to work, there will need to be support to organisations, many of them charities, that help prisoners on release.

‘And it’s vital that while creating some headroom through releases, the flow of people into prisons is also drastically reduced.