New York: Harvey Weinstein used his "power and prestige" in the film industry to bully women he sexually assaulted into silence, his crimes spanning decades, prosecutors said at the beginning of his trial Wednesday.

Weinstein lived "a lavish lifestyle that most of us will never know," but trial evidence "will also show that man was a sexual predator and rapist," Assistant District Attorney Meghan Hast told a captivated jury in the trial's first moments. The proceedings are expected to last two months. 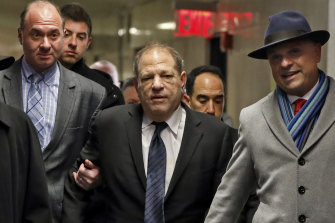 Harvey Weinstein, centre, is accompanied by attorney Arthur Aidala, right, as he arrived at court for his trial.Credit:AP

The prosecutor put photos on the screen – of Weinstein smiling for cameras on the red carpet and of the women he allegedly abused.

"At the end of this trial, the evidence will be clear that the man seated right there was not just a titan in Hollywood; he was a rapist, sexually assaulting these women when they refused to comply with his desires and his orders and then using his power and prestige in the entertainment industry to ensure their silence."

Finally, Hast said, "These women will have their voices heard."

Actress Annabella Sciorra, one of the alleged victims, was allegedly blindsided when Weinstein showed up at her apartment as she was readying for bed one night in the 1990s.

"He pinned her arms above her head and despite her verbal and physical attempts to stop him, he continued to hold her down … and raped her," Hast said. Sciorra was shaking as the unwanted encounter continued and the Sopranos star was tormented for decades by Weinstein's attack.

"It took 25 years before she was able to confront her nightmare and tell her story," Hast said.

Opening statements started on Wednesday morning in front of a packed house of reporters, attorneys and members of the public. A line to get into New York State Supreme Court in Lower Manhattan started forming in the early morning hours. 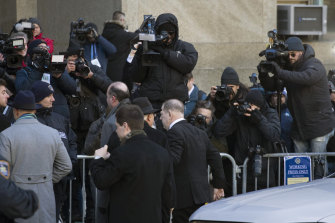 A line had formed early in the morning to see Weinstein, centre, arrive at the Lower Manhattan court. Credit:AP

The judge spent about 20 minutes instructing jurors on their obligations concerning evidence and testimony.

"Throughout these proceedings, the defendant is presumed to be innocent," Justice James Burke said.

Weinstein, 67, is accused of forcing a sex act on his one-time production assistant Mimi Haleyi in 2006 and raping another woman in a Manhattan hotel room in 2013.

He faces the most time in prison on the top counts, predatory sexual assault, which covers a pattern of sexual misconduct and includes the Sciorra rape charge. If convicted on those charges, he could face 10 years to life in prison.

The former filmmaking powerhouse entered the courtroom around 9.15am without the aid of the walker he has been using for several weeks following a recent back surgery.

A reporter in the hallway asked if he'd "get a fair trial" as he made his way down the 15th-floor hallway into the crowded courtroom.

"Of course," Weinstein said, ignoring other questions shouted in his direction. Entering the courtroom, he limped down the centre aisle and latched onto the arm of one of his handlers.

"We're going too fast," Weinstein said. "I have to sit down."

Weinstein's trial started on January 6, and jury selection spanned two weeks. Although the sides were originally going to select six alternate jurors, they settled on three rather than going through detailed questioning, a process known as voir dire, of another set of 20 prospects.

It remains to be seen whether the relatively small number of alternates will present a problem. Should a juror have an emergency illness or unforeseen conflict, it could potentially derail the case.

Weinstein came under fire in October 2017 when investigations published in the New York Times and the New Yorker prompted scores of women to accuse him of sexual assault and sexual harassment spanning decades.

Allegations against Weinstein are credited with igniting the #MeToo movement.