Wearing ear protectors and safety glasses, Putin ay under a net and fired several shots from the Russian SVD sniper.

The Kremlin did not explain whether or not he hit the targets, which were nearly  1,000ft away.

But visible on his visit was a uniformed officer carrying what appeared to be the Russian president’s so-called ‘nuclear football’ — a briefcase containing the codes needed to authorise a nuclear attack remotely.

He was also filmed speaking to officers, shaking hands with them and wishing them ‘good luck’.

Shoigu, by Putin’s side during the visit, gave him an update on the training of those called up in the draft, news agencies said.

The training camp is for newly mobilised Russians, with the state video seemingly aimed at boosting moral as the war in Ukraine continues. 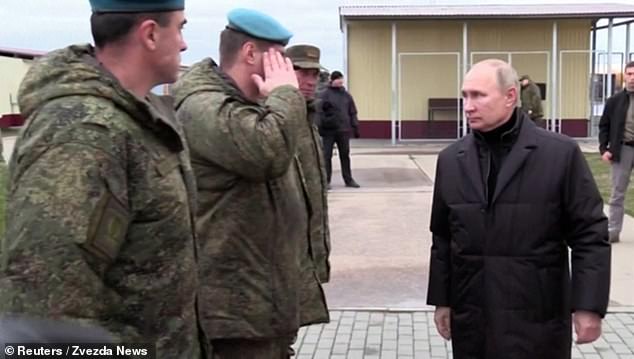 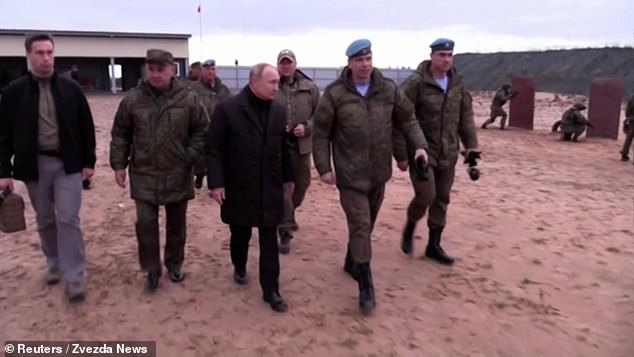 A second man holding a different bag may have been carrying medical supplies potentially vital for the 70-year-old Russian leader’s survival.

There are claims that Putin is suffering variously from several types of cancer, early Parkinson’s disease and a schizoaffective disorder.

The Kremlin denies he has health problems, with the shooting video appeared to be aimed at showing Putin’s macho image.

Russian state media has previously spread images and video of Putin hunting, dipping into icy cold water, or other material aiming at boosting his strongman persona.

The new footage appeared as Putin is feared in the West to be pondering using tactical nuclear weapons following his failure to invade more than a few fringe areas of Ukraine.

He watched mobilised soldiers tackle an obstacle course, and stage a practice in a fight against a mock enemy’s armoured vehicles — far away from the frontline.

In a wooden exchange, Putin is heard asking the mobilised men: ‘How long have you been here?’

He was told since 7 October.

Putin asked: ‘Do you feel confident…are your skills returning?’ 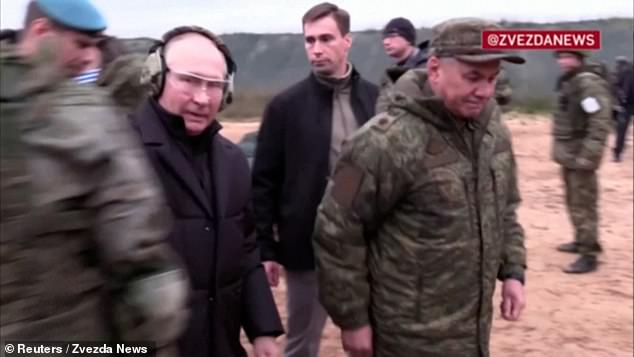 The Shoigu sighting came amid Western speculation that the defence minister is being edged out, perhaps at the expense of hardline new war commander General Sergei Surovikin.

Putin seemed to convey the message that Shoigu remains in his top team.

The visit happened a day after Putin raised Russia’s war footing and declared martial law in four occupied regions of Ukraine that he moved to annex last month in a step condemned as illegal by Ukraine, its allies and the United Nations General Assembly.

Faced with a series of defeats in the war, Putin last month declared a ‘partial mobilization’ to call up hundreds of thousands of extra troops.

It has proceeded chaotically, with frequent cases of call-up papers going out to the wrong men, and even Putin has been forced to acknowledge mistakes. Hundreds of thousands of Russians have fled abroad to escape being drafted.

Putin said last Friday the mobilization would be over within two weeks. On Thursday, he ordered all Russia’s regions to do more to support army needs and stressed that all mobilized men needed to be sent to the front with proper equipment. 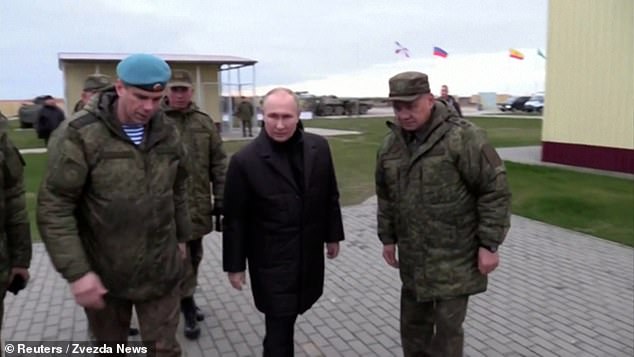 Defence Minister Sergei Shoigu, pictured on the right by Putin’s side during the visit, gave him an update on the training of those called up in the draft

More than 200,000 people have been conscripted into the Russian army since Putin announced the mobilisation drive, the defence ministry said.

Russia’s mobilisation is aimed at propping up Moscow’s forces in Ukraine after a series of military setbacks.

The news comes after video emerged of children as young as four and five being given war lessons in Russia.

Children at Kindergarten No. 31 in Korolev, near Moscow were taught the ‘qualities that distinguish a true defender of the Motherland’.

Firsov, from a militaristic pro-Kremlin movement called Combat Brotherhood, is a ‘veteran of military operations’ and regularly gives military lessons to older children.

In Russia, children attend kindergartens before transferring to schools at the age of seven.