Moscow: A meeting between Russian President Vladimir Putin and Turkish counterpart Recep Tayyip Erdogan ended in Moscow on Wednesday without an announcement of a potential deal on a planned Turkish-controlled zone in northern Syria.

Turkey has been pursuing the so-called "safe zone" along its border with northern Syria to provide security and stem the flow of migrants as the United States withdraws troops from the war-torn country.

Talks will continue, Erdogan told reporters. Turkey is seeking a "safe zone cleansed of terror", he said, standing alongside Putin at a televised press conference. 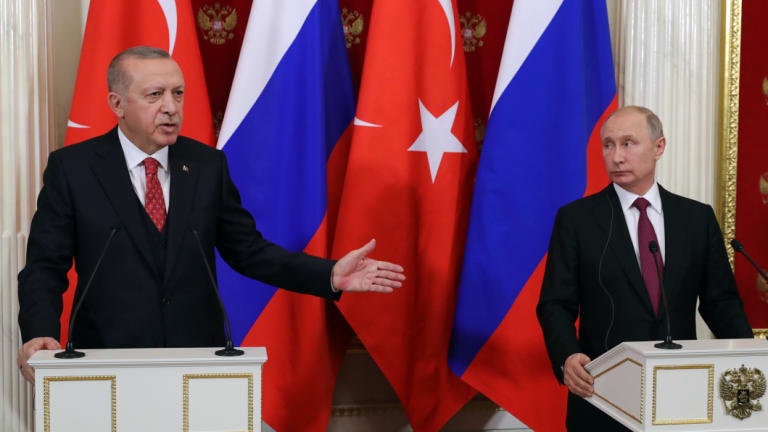 Turkey has received a positive response about the planned safe zone from the US and does not have a problem with Russia on the issue, Erdogan said. Russia has previously suggested transferring control of all Kurdish-held areas in northern Syria to the government of Syrian President Bashar Assad. Turkey opposes that government.

Despite backing conflicting sides, Russia and Turkey reached a deal last year to create a demilitarized buffer zone in the northern Syrian rebel stronghold of Idlib, staving off an assault by Syrian government forces.

Erdogan said that he and Putin discussed the ceasefire in Idlib and the US withdrawal decision, adding that they would not allow a power vacuum to be created as US troops leave Syria.

Russia and Turkey are convinced that anti-terrorism efforts in Syria need to continue, particularly in Idlib, Putin told the press conference.

The US and Russia have been collaborating on anti-terrorism efforts, including in Syria, and such work should continue, Putin said.

However, he welcomed the US decision to withdraw troops from Syria, saying such a move would have the potential to facilitate a restoration of stability.

Russia has repeatedly denounced the US military presence in Syria as an occupying force. Putin emphasized that additional measures are needed to stabilize the situation in Idlib. 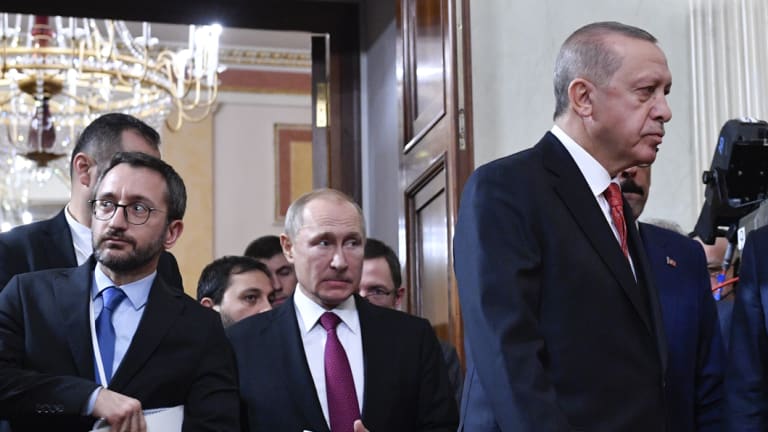 Erdogan, right, and Putin, middle, are jockeying for clout in Syria.Credit:AP

The area is now controlled by extremist group Hayat Tahrir al-Sham, which has "ousted the forces of the moderate armed opposition", Zakharova said in comments carried by Russian state news agency TASS.

Putin, in opening comments at his meeting with Erdogan, said that Russian-Turkish relations have improved to a large extent because of Erdogan's "personal merit".

The countries have previously faced off over Syria, where Russia supports the government and Turkey has supported certain rebel groups. Relations plummeted in late 2015, when a Turkish fighter jet shot down a Russian warplane.

The improvement in ties can be considered "your personal achievement", Putin told Erdogan, "because you focus a lot of attention on this". Putin called the Turkish leader a "dear friend".

Last week, Turkish state news agency Anadolu published a map of the planned safe zone, starting at the pro-Turkish rebel-controlled border town of Jarabulus and extending to the Iraqi border. The zone would be about 460 kilometres long and 32 kilometres wide, Anadolu said, also including important Syrian Kurdish cities such as Kobane.

Syrian Kurds, who have played a major role in battling Islamic State in Syria, control large parts of northern Syria. Erdogan has said this zone should be created with "logistic and financial" support from US coalition forces.

He has been discussing this with President Donald Trump, who, in December, shocked allies when he announced the withdrawal of US troops from Syria.