The king who needed a SEX COACH: Book claims Henry VI and his wife had a bedroom mentor – but RICHARD KAY reveals medieval monarchs often had staff to give them a boudoir boost

Few royals appear to have suffered from lack of privacy more than the current generation. When the Duchess of Sussex complained about the indignity of her private correspondence (with her father) being revealed to the world, it was hard not to be sympathetic.

Unpleasant though the intrusion was, the Duchess should be grateful she wasn’t born in the 15th century.

Then, every aspect of the Royal Family’s lives was monitored — including their most intimate moments, where they were surrounded by attendants, courtiers, priests and ministers. 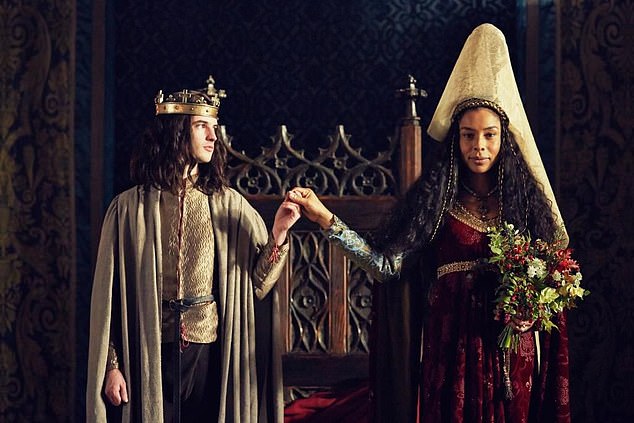 The BBC’s The Hollow Crown – War of the Roses showed King Henry VI’s wedding to Margaret of Anjou. In the 15th century, royal marriages were traditionally blessed with ‘bedding ceremonies’

Even the most reticent kings and queens had to conduct their sexual lives in front of onlookers. What they did, with whom, and how often was known to the entire court by the following morning.

The detailed retelling of every act of love-making was regarded not so much as salacious gossip, but constitutional business.

On a royal wedding night, the ritual of the bedroom was observed to ensure that the marriage had been consummated and was thus legally binding. As a monarch’s first duty was to provide an heir, any sexual failure had political consequences.

It was partly, of course, because royal marriages were largely dynastic and the begetting of a legitimate heir could save a country from bloody struggles of succession.

Never was this more perilous than during the reign of Henry VI, who succeeded to the throne in 1422 at the age of nine months, and was the only English monarch to have also been crowned king of France.

A virgin until he married at 24, he was also mentally unstable. Unlike his father who crushed the French at Agincourt, Henry loathed warfare and was timid and shy.

Yet his lack of passion for conquest and military success were unimportant when offset against his eight-year struggle to produce an heir. Without a successor, the kingdom’s future was in jeopardy. And it was for his endeavours — or lack of them — in the royal bedchamber that he was judged. 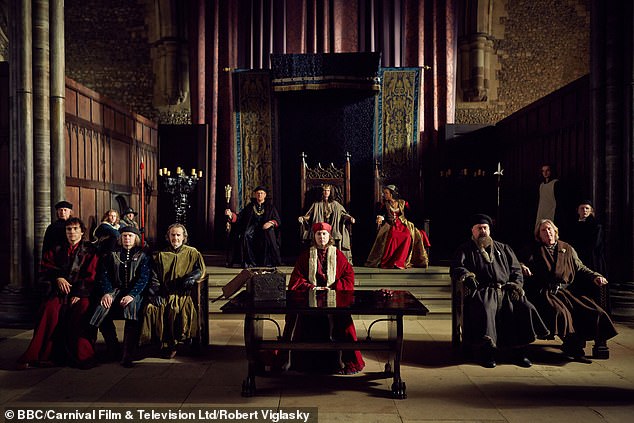 Every moment of the Royals’ lives was monitored as they were constantly surrounded by attendants, courtiers, priests and ministers 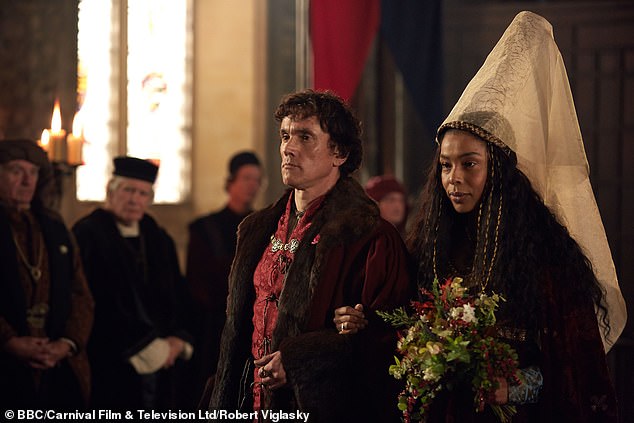 Historian Lauren Johnson has suggested that the court took matters into its own hands.

She has uncovered evidence in the National Archives and Royal Household accounts showing that when his wife, Margaret of Anjou, visited the king’s bedroom, they were sometimes joined by trusted attendants. ‘Was it because the famously chaste Henry didn’t know what he was doing?’ Johnson asks.

‘I think it’s entirely possible that it had reached a certain point where it perhaps became necessary to make clear to him what he should be doing.’

Royal marriages were traditionally blessed with ‘bedding ceremonies’ in which the newlyweds would be put to bed — the bride undressed by her ladies and the groom escorted to the bedchamber by musicians and priests.

Sometimes they demanded to see the couple’s naked legs entwined — an accepted sign of consummation. On other occasions the attendants did not withdraw until they heard the sound of passion.

The morning after, their bed-linen might be displayed as proof of the act, which in turn led the phrase ‘to air one’s dirty linen in public’.

But what Henry and Margaret experienced was different.

‘This was not just their wedding night, it was an ongoing thing,’ says Johnson, who suggests that Henry had a coach in his bed to teach him how to have sex.

She quotes the Ryalle Bok of court protocol that records how once the king was in bed, he would send for the queen.

Another witness described that when the king and queen lay together, his chamberlain lay ‘in the same chamber’. Johnson says it is not clear when the attendants left, ‘leaving open the intriguing suggestion that they remained to make sure the marriage bed was properly used. 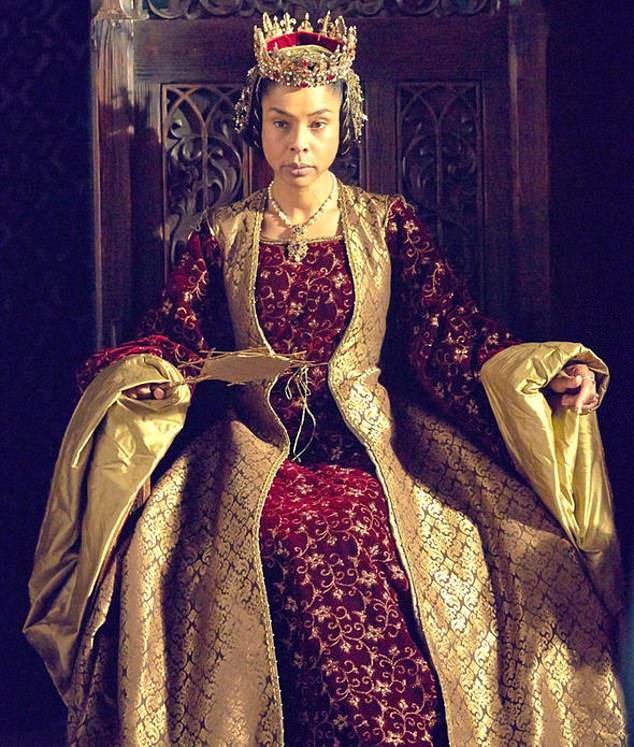 Sophie Okonedo plays Queen Margaret in the Hollow Crown which is set during the War of the Roses. Some historians believe that when Margaret went into her husband’s bedroom they were joined by trusted attendants

‘The evidence that there are people staying in the king’s bedroom potentially some years after he is married . . . is very odd.’

Her book, Shadow King: The Life And Death Of Henry VI, says the young sovereign’s inability to sire an heir undermined his masculinity and authority.

But eventually Henry did produce a son, Edward of Lancaster, who was killed during the Wars of the Roses — the only heir to the throne to die in battle.

Henry was not the only boy-king to need lessons in lovemaking.

Two centuries later, Louis XIV of France also was a student, albeit a more attentive one. The Sun King was a great royal philanderer, despite the size of his manhood, which, according to one spurned lover, was on the small side.

It all began at the age of 15 when his mother sought a woman to teach her beloved Louis that beds were not just for sleeping in.

The woman had to be discreet, experienced but not too experienced. Looks scarcely mattered — which was just as well for the Baroness de Beauvais, a lady-in- waiting of almost 40, who had one eye and was no beauty.

But ‘one-eyed Kate’ was an experienced courtesan and credited with the ‘picking of the royal cherry’, as the taking of his virginity was later described.

It was considered a service to the nation and she was rewarded with two houses in Paris, a hotel and a pension. Louis remained a willing student and frequently visited her over the years.

In 18th-century Europe, the sex lives of the royals continued to be a topic of discussion.

After seven years of marriage and no pregnancies, Joseph II, the Holy Roman Emperor, sought the advice of his worldly brother-in-law Louis XVI — soon to lose his head to the guillotine in the French Revolution.

Joseph told Louis of his sexual activities and the reason for his lack of offspring became apparent. ‘He has strong erections, he puts his member in, stays there without stirring for two minutes perhaps then withdraws without ejaculating, still with an erection and wishes her good night,’ Louis later reported.

The situation was no less different for queens. In Britain, the menstrual cycle of the virgin Elizabeth I was the subject of fierce debate. 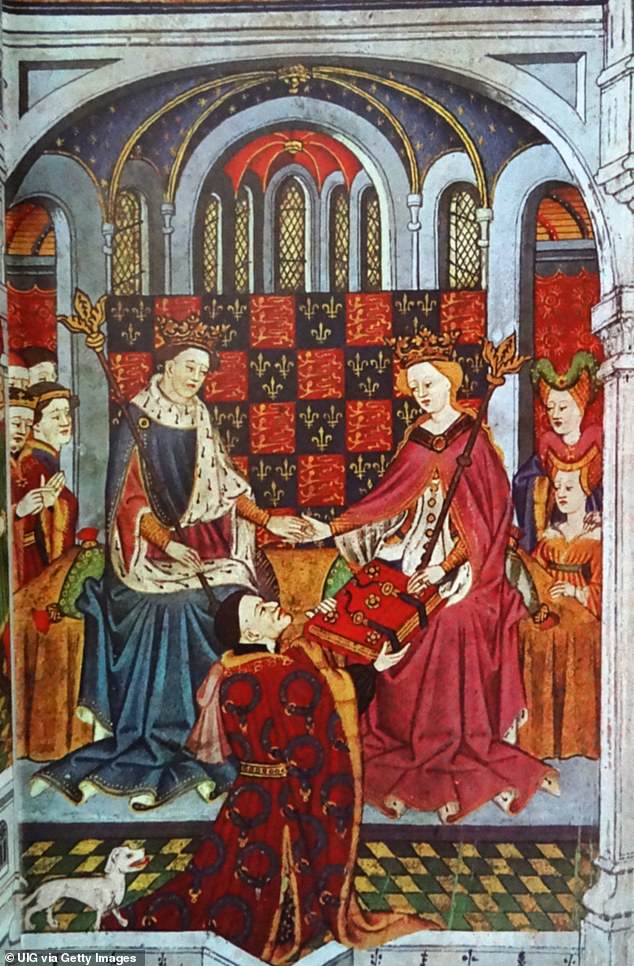 Henry VI and Margaret of Anjou with their courtiers while John Talbot, the Earl of Shrewsbury kneels before the Queen to present her with a book

Determined to know if she was fertile, Philip II of Spain was said to have bribed her laundress to supply intimate details.

It was carved with two small cherubs of unmistakeable gender — on the king’s side, one clutching his outsize codpiece. On the queen’s side, a female cherub in vulgar centrefold style.

Unfortunately, the aphrodisiac furniture had little effect. Henry found Anne so hideous that, as he told Thomas Cromwell, his chief minister, he was unable to make love to her and the marriage was swiftly annulled.

So WHATEVER anxieties the Duchess of Sussex is experiencing as the birth of her first baby draws near, she can console herself with the knowledge that they cannot compare with those of her royal predecessors.

Had she been carrying a king’s child 500 years ago, up to 70 people would be present in the birthing chamber, in part to ensure there was no sleight of hand with an infant imposter being installed.

This tradition of having senior dignitaries present continued well into the 20th century.

When the Queen was born in Mayfair on April 21, 1926, Home Secretary Sir William-Joynson Hicks was present, while his successor John Clynes was detained in Scotland for two weeks in 1930 awaiting the overdue arrival of Princess Margaret at Glamis Castle.

The last time a Home Secretary bore witness at a royal birth was for that of the Queen’s cousin Princess Alexandra in 1936. By the time the Prince of Wales was born in 1948. the practice had died out.

Mind you, the presence of fathers at births was even then still much too modern. When Charles arrived, Prince Philip was playing squash.