An ex-Navy officer has alleged in an open letter to Defence Chief Angus Campbell that she was raped three times during her time as a midshipman without indulging in the risk factors that he warned last week could make women a target.

General Campbell told new recruits at the Australian Defence Force Academy that they could avoid becoming “prey” to sexual predators by being aware of the four As: alcohol, alone after midnight, alone and attractive. 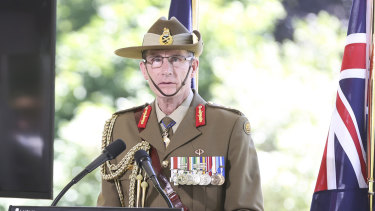 Chief of the Defence Force General Angus Campbell has come under fire over a speech given to cadets.Credit:Alex Ellinghausen

Erin Brown lost her virginity at the age of 17, one month after she had become a commissioned officer on a scholarship with the Royal Australian Navy, when she was raped by a more senior officer. She said that although there was alcohol involved, she not dressed provocatively, it was not after midnight and she was not alone.

The second incident occurred in divisional lines on the HMAS Creswell, where none of General Campbell’s risk factors were involved. The third occurred while she was asleep in bed when a midshipman entered her room, climbed into her bed and raped her with his hand held over her mouth to stop her from screaming.

“I was not alone in the division, I had not had any alcohol, was wearing my pyjamas and not anymore attractive than any other time,” she wrote.

Ms Brown, 37, told Nine News she was speaking out to support others who were not ready and to encourage General Campbell to be more careful with the words that he chose.

She said she reported the incidents to a senior officer who said it was her own fault and that she was everything that was wrong with females in the defence force. She left the force, her dream job, and has only told close friends and family members what happened to her in more than 20 years.

“Telling victims or potential victims that it is their responsibility to mitigate harm and therefore prevent bad people from raping them is a huge cop-out and quite frankly, everything that is wrong with rape culture in the Australian Defence Force,” she wrote in her open letter.

Since General Campbell’s comments came to light last week, he has been accused of victim blaming. He has since released a statement saying that the Australian Defence Force had zero tolerance for unacceptable behaviour.

“I’m aware that my comments have been interpreted by some in a way that I did not intend,” he said. “There is never an excuse for perpetrating sexual assault or sexual harassment and the perpetrator is always to blame.”

Catch all the day’s breaking news

At the end of each day, we’ll send you the most important breaking news headlines, evening entertainment ideas and a long read to enjoy.  Sign up here.