Reading triple murderer should not get life in jail because he only had ‘fleeting interest’ in Islamist extremism, judge hears as victims’ families describe ‘unbearable loss’

Reading triple murderer Khairi Saadallah should not be jailed for life over a ‘fleeting interest’ to Islamist jihad, his defence barrister has told a court.

The failed Libyan asylum seeker, who had photos of an ISIS flag, Jihadi John and the Twin Towers on his phone, launched the attacks in Forbury Gardens as the victims were enjoying a summer evening on June 20 last year after the first lockdown restrictions in England were relaxed.

Three others – Stephen Young, Patrick Edwards and Nishit Nisudan – were also injured before Saadallah threw away the knife and ran off, pursued by an off-duty police officer.

Saadallah, of Basingstoke Road, Reading, has pleaded guilty to three murders and three attempted murders and appeared at the Old Bailey on Wednesday as his sentencing continued.

The Crown is seeking a whole life order, meaning he would never be considered for release.

But today, ahead of the victims’ families paying tribute to their loved ones, Rossano Scamardella QC, mitigating, suggested the sentence should be one of life imprisonment with a starting point of 30 years. 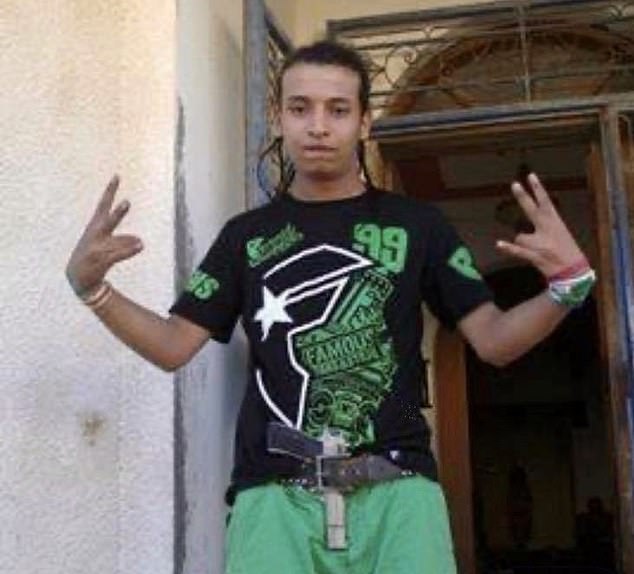 The defence for Reading triple murderer Khairi Saadallah say he should not be jailed for life for the despicable attack last year because there was a lack of serious premeditation, his ‘fleeting’ strength of his commitment to Islamist jihad, and his mental health issues

He said that Saadallah should receive a lenient sentence because there was a lack of serious premeditation, his ‘fleeting’ strength of his commitment to Islamist jihad, and his mental health issues.

He told the court: ‘None of the submissions I’m about to make are designed to downplay or dilute the seriousness of the incident … criminal offending is rarely more serious than this.’

Mr Scamardella went on: ‘In this case, significant planning or premeditation simply does not exist.

‘I concede the defendant took certain steps to facilitate the killing, putting himself in a position to commit the act, but nothing close in the issue of planning that would justify a whole life term.’

He said Saadallah had a ‘fleeting or occasional interest’ in Islamist extremism, but that ‘must be viewed in the wider context of his other behaviours at the time’.

Mr Scamardella said: ‘He smokes cigarettes, takes drugs, he is a heavy user of alcohol. He self-harmed, he had tattoos.

‘A person willing to kill for that cause would not behave in that way.’

He added Saadallah has a crucifix tattoo on his leg, has been pictured worshipping in a church, and had described himself in interview as ‘part Muslim and part Catholic’.

‘No radical Islamist would countenance adoption of another faith, it’s inconceivable’, the defending barrister added.

Mr Scamardella said portraying Saadallah as a committed jihadist was a ‘superficially attractive proposition’ based on ‘pieces of evidence that exist that demonstrate or at least might demonstrate a fleeting interest’. 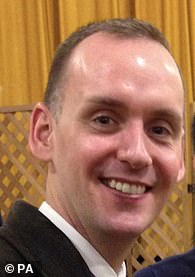 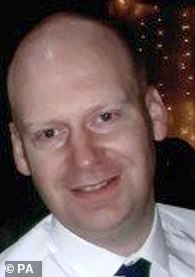 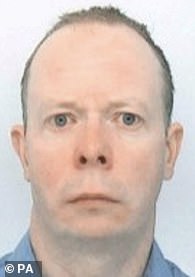 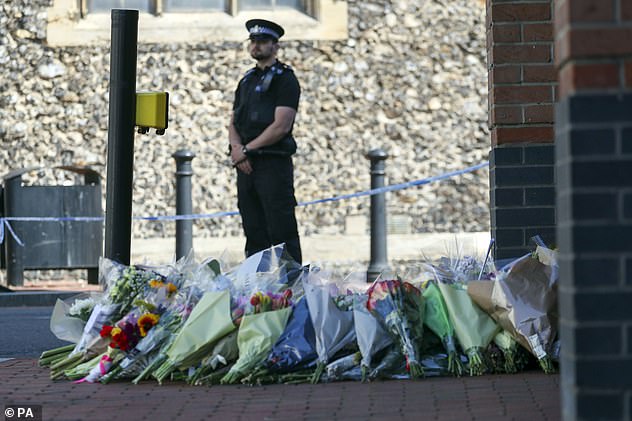 An examination of Saadallah’s mobile phone revealed extremist material, including the flag of so-called Islamic State, Jihadi John and an image of the Twin Towers.

Mr Scamardella said images can be ‘cached’ on to phones simply by visiting websites or Facebook, adding: ‘It is an unsafe conclusion to draw that the presence of images on his phone was evidence of planning.’

Since arriving in Britain in 2012, Saadallah had been repeatedly arrested and convicted of various offences, including theft and assault, between 2013 and last year.

He was released from HMP Bullingdon on June 5, just days before the attack.

Saadallah had developed an emotionally unstable and anti-social personality disorder, with his behaviour worsened by alcohol and cannabis misuse, the court has heard. 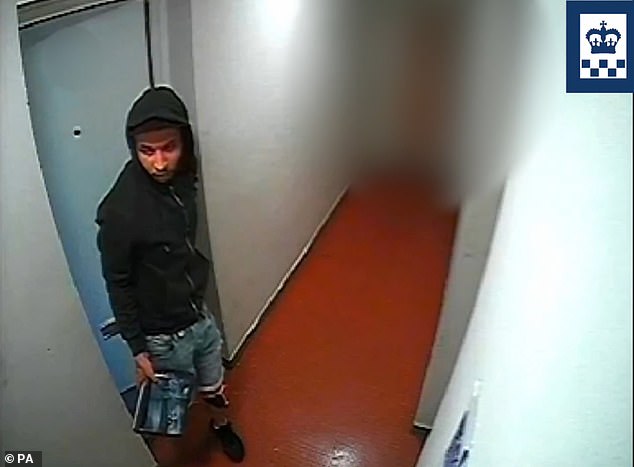 Rossano Scamardella QC, mitigating, suggested the whole life sentence should instead be one of life imprisonment with a starting point of 30 years. Pictured: Saadallah leaving his flat on the day of the murders 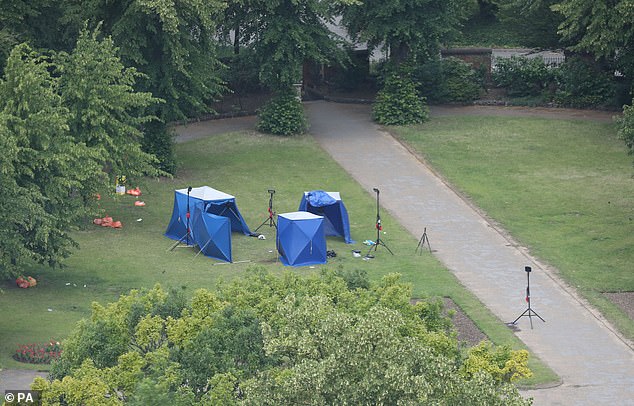 An examination of Saadallah’s mobile phone revealed extremist material, including the flag of so-called Islamic State, Jihadi John and an image of the Twin Towers. The defence claims Saadallah had a ‘fleeting or occasional interest’ in Islamist extremism. Pictured: Police tents in Reading town centre 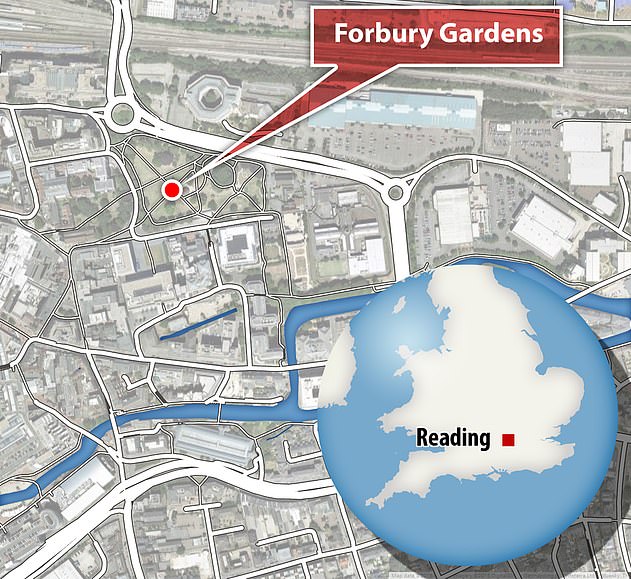 The incident took place in Forbury Gardens, in the centre of Reading, Berkshire, on June 20

Mr Scamardella said: ‘We are not suggesting that this was the cause of his offending.

The court heard that a psychiatrist had since concluded that the events of June 20 were ‘unrelated to the effects of either mental disorder or substance misuse’.

Mr Justice Sweeney has said the sentencing will conclude on Monday.

Saadallah, wearing a white and blue top and a woolly hat in the dock of court two, stared down as the statements were read over the course of more than an hour.

In a moving impact statement read to the court, Mr Furlong’s father Gary said: ‘James was a remarkable person, an unfailingly kind and compassionate man.

‘He was a gentle, a deeply caring soul and was a great support to those he knew.

‘He was a real gift to society. By all accounts he was an exemplary teacher who was passionately dedicated to his pupils and their success.

‘James lived a happy life and we were a very close family. He was the best son, brother partner and friend we all could have wished for. His life has been cut short at only 36 years of age in what was a completely unnecessary and senseless act of violence. 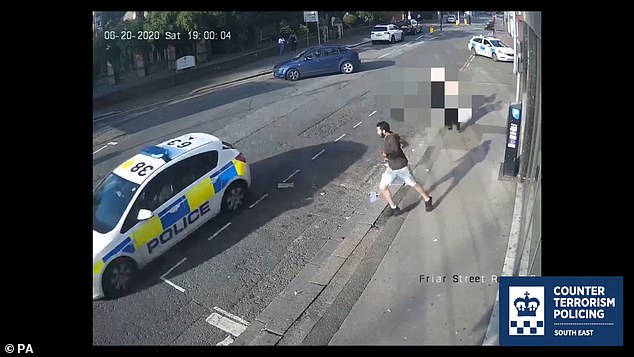 Khairi Saadallah being chased by police after his terror attack

‘We all now face the rest of our lives trying to adjust to this unbearable loss.’

He added that Mr Furlong was ‘kind-hearted’ and ‘fun-loving’ with a ‘passion’ for teaching, adding that the family had received hundreds of letters, cards and messages from current and former pupils.

‘James was gay. He first came out as gay to his mother and then later to the rest of his family. He was worried that it might change things, but it only made us all closer.

Mr Furlong’s partner, Tony Belicard, told the court the pair met in February 2019 and shared the ‘same hobbies and the same ideals’.

He said: ‘We had many plans, moving in together, meeting my parents, he was learning French, we even talked about adopting a child.

‘James was an incredibly kind person, and if this murderer had asked him for help instead of taking his life, James would have reached out without any hesitation.’ 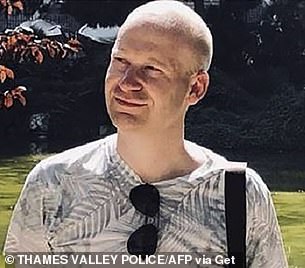 Saadallah, who has admitted three murders and three attempted murders, sat through the statement with his head bowed.

Mr Ritchie-Bennett’s family gave statements through video link from Philadelphia, where he had moved from in 2006 to marry Ian Bennett who died from cancer aged 32 in December 2014.

He worked for a law firm in London before taking a job at a Dutch pharmaceutical company in Reading.

His father, Robert Ritchie, is a retired chief inspector and his mother is also a retired police officer, while his brother, also called Robert, is a captain in the 7th district of Philadelphia.

Robert Ritchie, Mr Ritchie-Bennett’s older brother, wore a suit and a red tie as he told the court over a video link that his brother’s 40th birthday was due on January 22.

‘He was the only person that I have ever known in my life who was looking forward to his 40th birthday. My brother wanted to do three things for his 40th birthday: climb Mount Kilimanjaro; travel to Greece; and travel to Tanzania.

‘He was disappointed that he would not be able to do all three because of the restrictions placed upon us by the COVID-19 pandemic, however he said he had the rest of his life to do those three things. 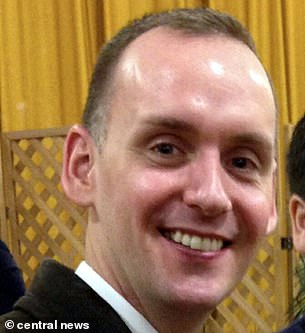 Mr Ritchie-Bennett (pictured) had been ill with coronavirus

‘Little did he know a terrorist was going to take his life from him, denying him the ability to achieve his dreams.

‘Well, I would like that terrorist to know today, that despite his actions and his entire life of failure, he has not, he cannot, and he will not take away the American nor the British spirit.’

Mr Ritchie said his brother had been ‘cheated out of the rest of his life by this terrorist’ and added: ‘My family and I have been cheated out of having Joe to love, to laugh with, to hold, to love, to share good times with, seek counsel from – all the good things in life, which is what my brother was. He should still be here.’

Addressing the judge, Mr Justice Sweeney, he said: ‘This life of crime that this terrorist has chosen for himself culminated in the savage murders of my brother Joe, his friends James and David; and the attempted murders of Stephen [Young], Patrick [Edwards] and Nishit [Nisudan].

‘Please do not give this terrorist the opportunity to do this to anyone else, ever again. I beg of this court. Thank you.’

Mr Ritchie-Bennet’s mother, Charlene, said that when Joe moved to the UK he went there to be with his ‘one true love’.

‘Our family calendar in our kitchen has never been turned, it is still in the month of June when Joe his friends were brutally murdered or wounded,’ she added.

‘I cannot and will not call you by name as you are nothing but a failure in your entire life and I guess your actions of that day made you feel powerful without thinking of the people whom would lose their loved one so tragically. 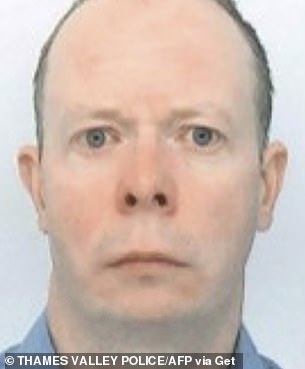 David Wails, 49, was a scientist who specialised in clean energy

‘With all the actions that led up to that beautiful day, you had every intent when you purchased the knife that was used to brutally kill three of the nicest men in the world.

‘You robbed these three perfectly good men [of life] and wounded others that day and for what reason? You are a failure always was and you always will be.’

Andrew Wails, his younger brother, said: ‘The rage and hatred I feel toward the coward that did this to David is indescribable.

‘This coward stabbed David in the back. David would not have seen this monster coming towards him.

‘David stood no chance of being able to defend himself or even put up any sort of fight. This is the most cowardly act anyone could undertake.

‘David was my elder brother. He was an amazing person, clever, hardworking, law abiding. He should not have died in the way he did all because of some evil individual.’

He pledged he would be in court on Monday to see Saadallah sentenced and added: ‘I will be there for my brother David, and I hope to see justice for what this coward has done.’