The Great Christmas clear out begins (but who’s going to collect it as staff shortages cripple UK?): Recycling bins pile high while trees line the streets as councils across UK battle absences caused by Covid isolation

Rubbish bins, recycling containers and bottle banks across the country are overflowing as severe staff shortages brought about by rising Covid cases have decimated council services.

Councillors in London, Gloucestershire, Somerset and Buckinghamshire have said bin collection services have been scaled back as workers continue to fall sick with the virus, just as families aim to get rid of an abundance of material following the festive season.

Several London boroughs have announced there may be future delays to services, with Manchester and Birmingham City Councils also declaring suspension and cancellation of services while apologising for disrupted collections over the Christmas period.

Chelmsford City Council confirmed 23 members of staff were absent and cancelled three days’ worth of food waste collections, while North Somerset Council said they had been unable to pick up 1,000 recycling bins on New Year’s Eve as crews remain ‘stretched due to staff sickness’.

Councils across the UK are having to redistribute staff between essential services to keep everything running, and the public sector has been asked to prepare for a worst-case scenario of up to a quarter of staff off work.

The Cabinet Office said that, so far, disruption caused by Omicron had been controlled in ‘most parts of the public sector’, but it said leaders had been asked to test plans against 10, 20 and 25 per cent workforce absence rates.

It comes as images from across the nation flooded in, showing mountains of waste and recycling piled up alongside overflowing containers and unwanted Christmas trees left to rot on the pavement. 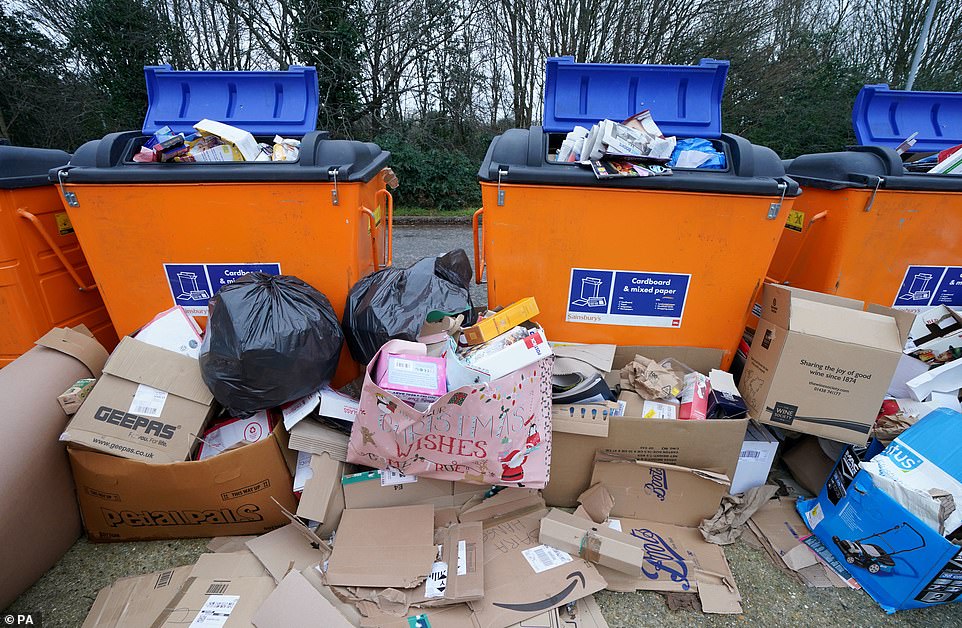 Rubbish bins, recycling containers and bottle banks across the country are overflowing as severe staff shortages brought about by rising Covid cases have decimated council services. (A view of an overflowing recycling point in Ashford, Kent. Picture date: Monday January 3, 2022) 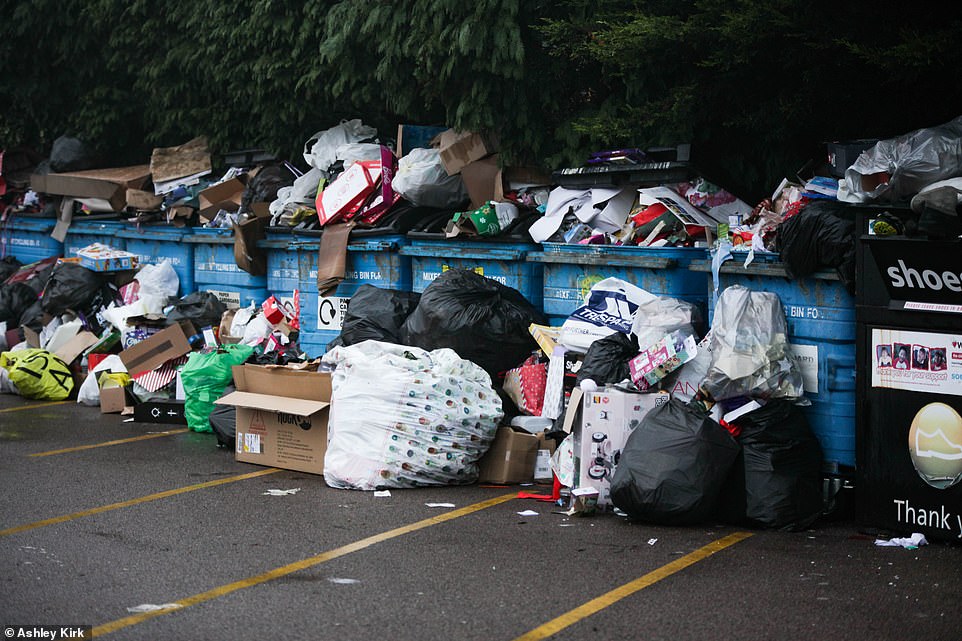 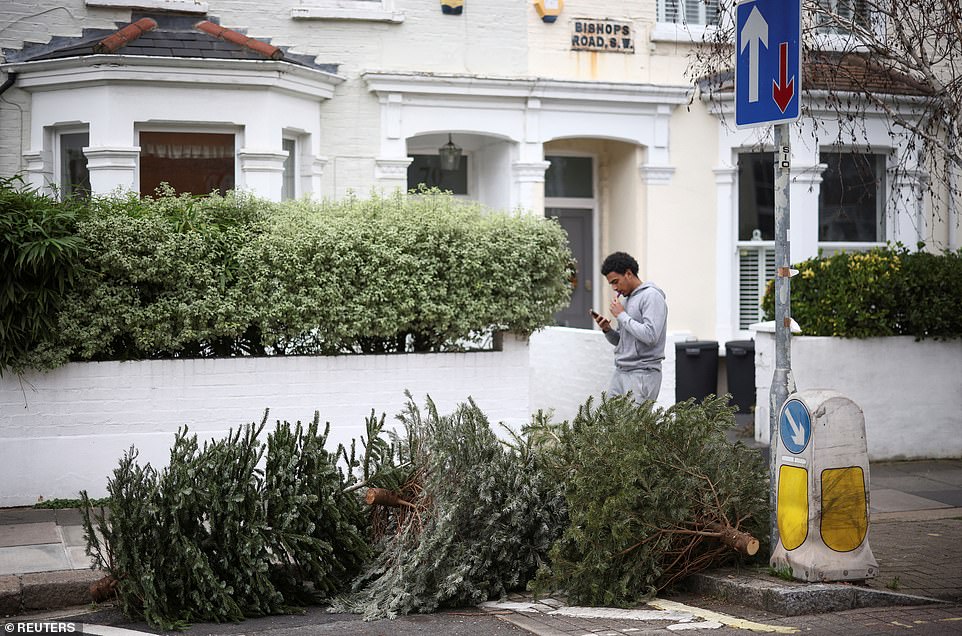 A person walks past Christmas trees discarded on the pavement, in west London, Britain, January 3, 2022. Many people are simply throwing their Christmas trees outside to rot 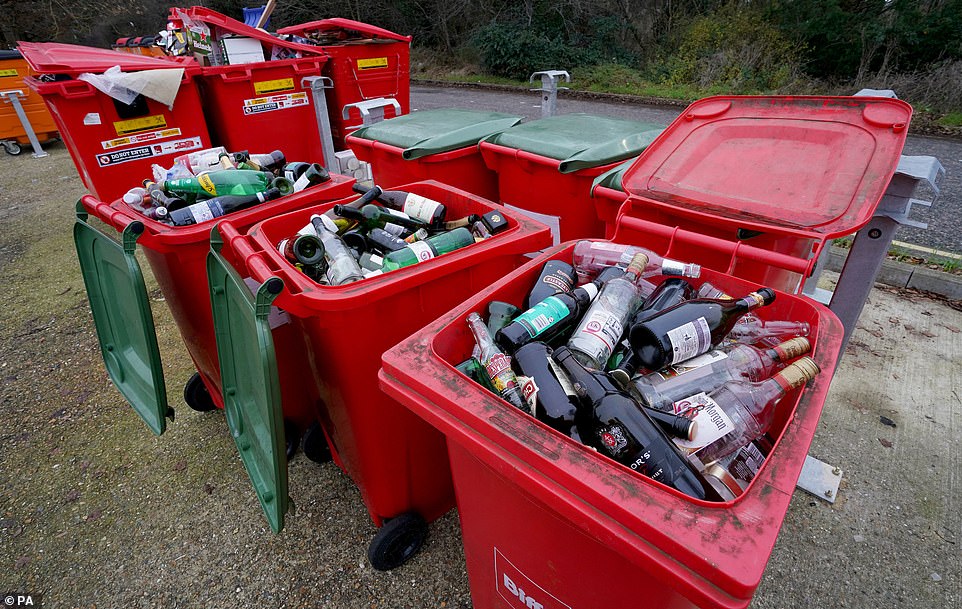 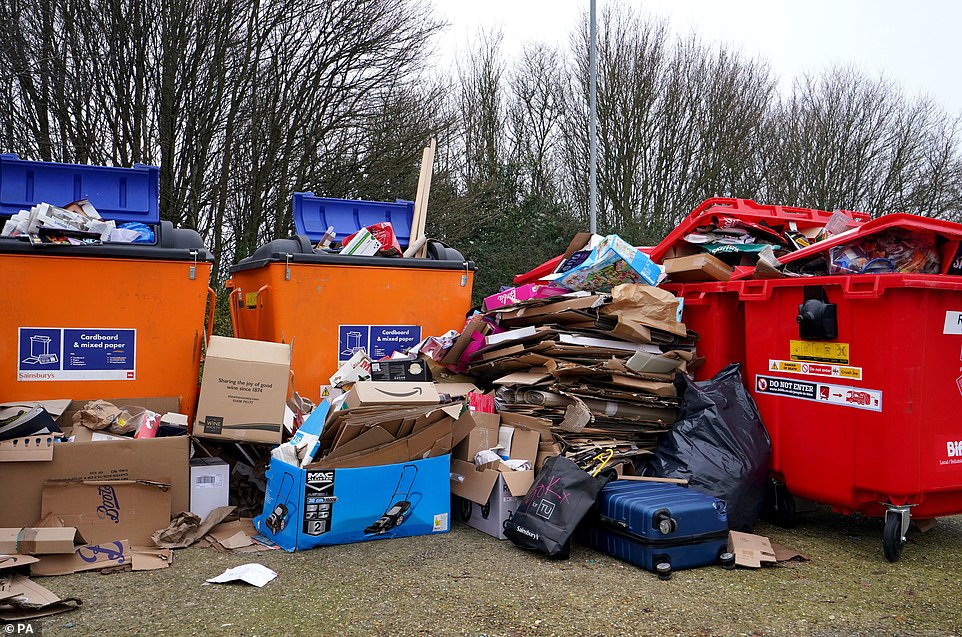 Overflowing bins at a recycling point in Ashford, Kent, after Christmas are pictured this afternoon 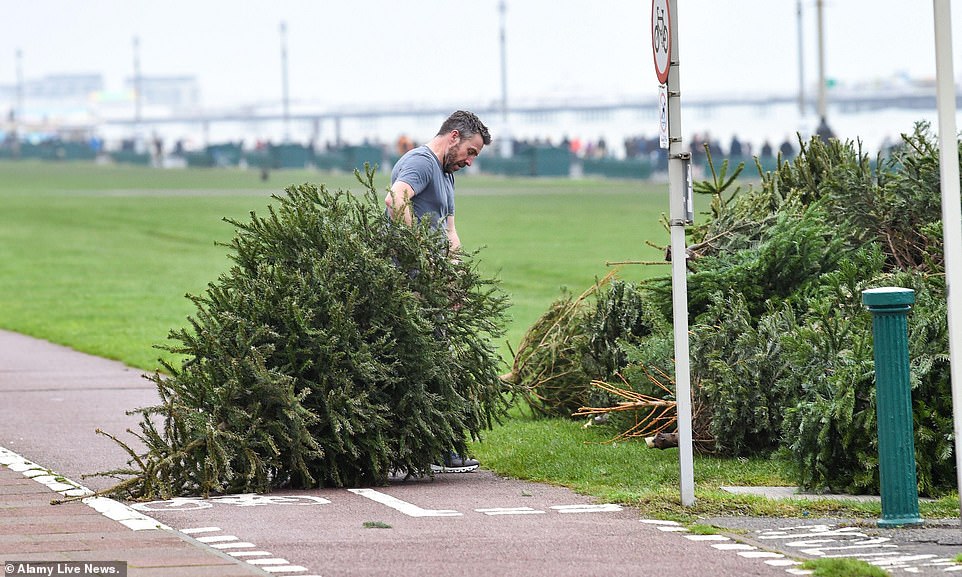 The Christmas tree recycling point on Hove Lawns in Brighton is busy as the festive season comes to an end on Bank Holiday Monday in England (pictured today, Jan 3) 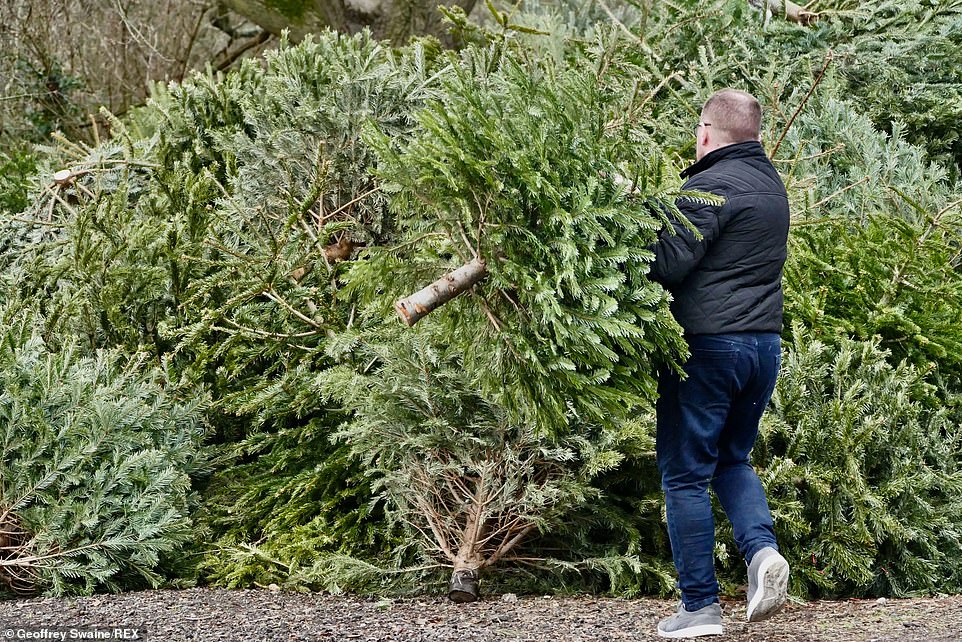 Christmas trees begin to pile up ready for the council to collect them and mulch them down, people discard their trees before twelfth night. Christmas tree recycling, Clayfield Copse, Berkshire, UK – 03 Jan 2022 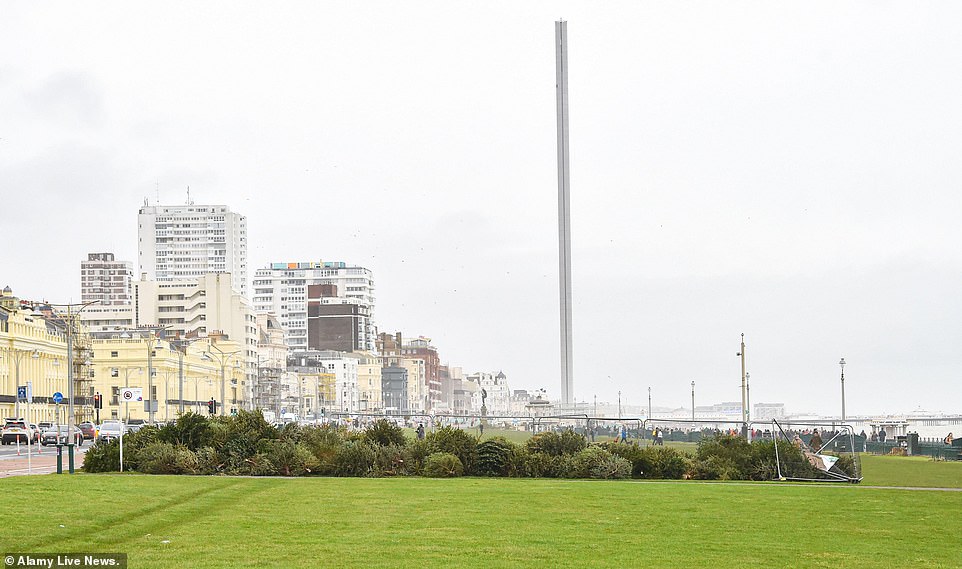 Stephanos Ioannou, a Conservative councillor in Enfield, said the number of complaints about missed bin collections was roughly double the average for this time of year.

‘I’ve been driving round my ward and seeing bins overflowing and Christmas trees are left outside,’ he told the PA news agency.

‘Over the Christmas period, usually I get on average 30 emails a week on waste services.

Gloucester meanwhile has been hit with ‘terrible problems’ as bin collectors work in close-knit teams and quickly pass the virus onto one another, multiplying the number of staff off sick at one time, Liberal Democrat councillor Declan Wilson said.

Mr Wilson said recycling collections were stopped altogether over Christmas, caused by a combination of Covid-related absences and driver shortages.

‘The reason for it is driver shortages and Covid as well.

‘It’s Brexit and Covid as well. We have brought this up in council meetings.

‘What they tell us is they’ve got the drivers working in cells so there’s two or three working together, so one of them gets Covid and that means two or three of them are off.

Several London boroughs have announced there may be future delays to services, with Haringey Council warning the ‘uniquely challenging times’ had impacted their workforce.

Newham Council has temporarily suspended the collection of bulky waste items due to ‘higher than normal levels of staff absence’.

Green food and garden recycling bin collections have been cancelled ‘until further notice’ by Manchester City Council due to the number of staff in isolation.

Meanwhile Birmingham City Council apologised for missed collections over the festive period, saying crews had been affected by Covid in the week leading up to December 30.

It comes after ministers asked public sector leaders to make ‘contingency plans’ for worst-case scenarios in which up to a quarter of staff would be absent.

Asked on Times Radio whether such shortages were likely to occur, Health Minister Edward Argar said: ‘I think we model a range of scenarios up to things we think are highly unlikely, but you still do it because that’s what a responsible Government does in preparing for all eventualities.’

The Local Government Association (LGA), which represents councils across England, said crews have been badly impacted by the spread of the Omicron variant and called for workers be prioritised for Covid tests.

An LGA spokesman said: ‘As cases of Covid-19 rise in light of the omicron variant, councils are concerned that these existing staffing issues may get worse.’ 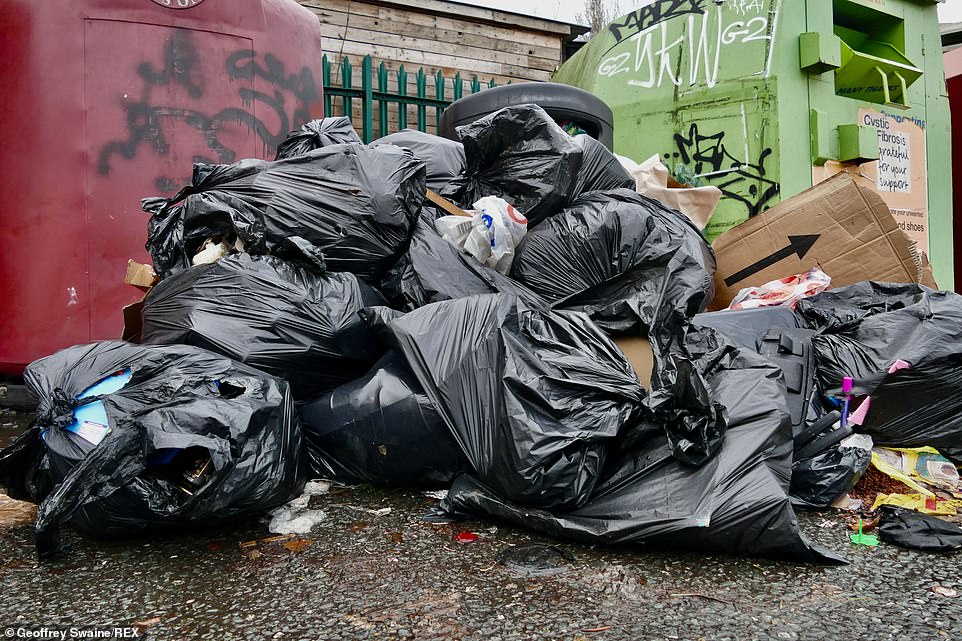 Festive rubbish begins to accumulate at waste points in the town. Some rubbish collection days over Christmas and New Year have been affected due to coronavirus cases (Reading, Berkshire, UK) 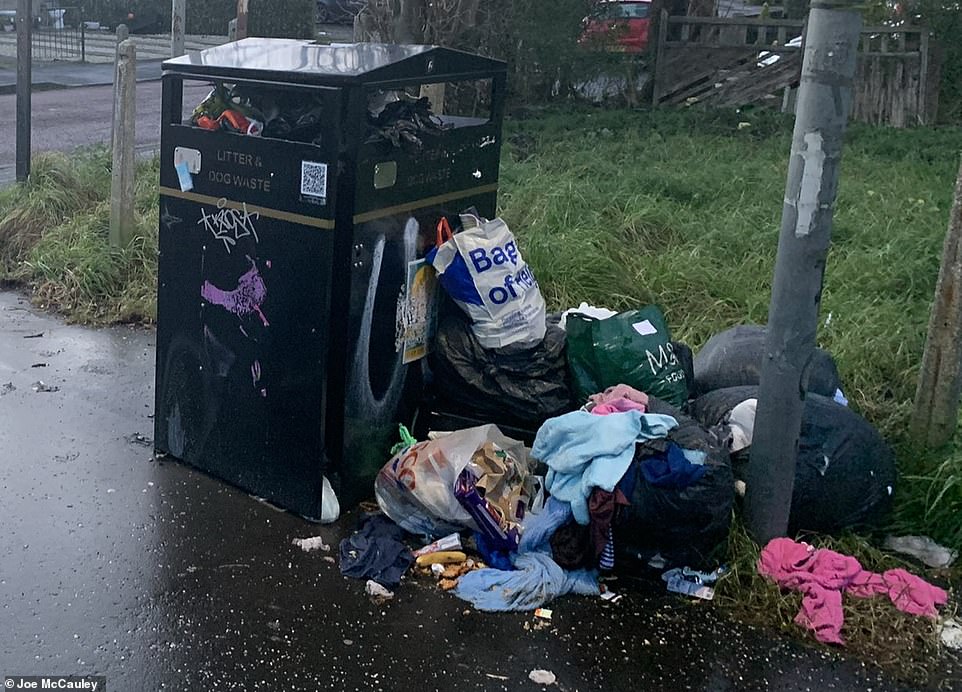 Glasgow-based Joe McCauley, culture spokesman for the Scottish Liberal Democrats, said there had been an ‘increase in reports of bins overflowing’ in recent weeks 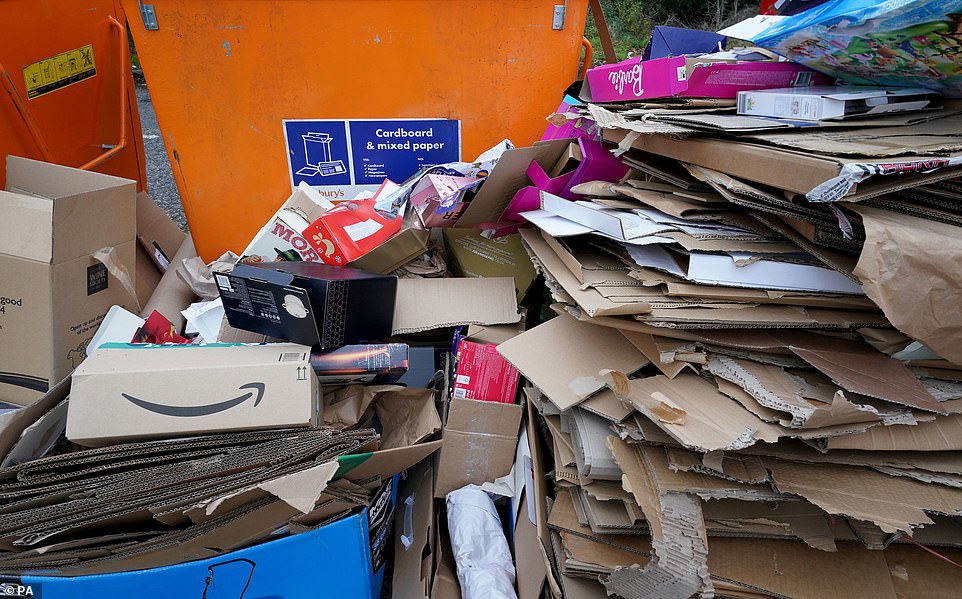 An overflowing recycling point in Ashford, Kent, is pictured this afternoon, with plenty of cardboard packaging 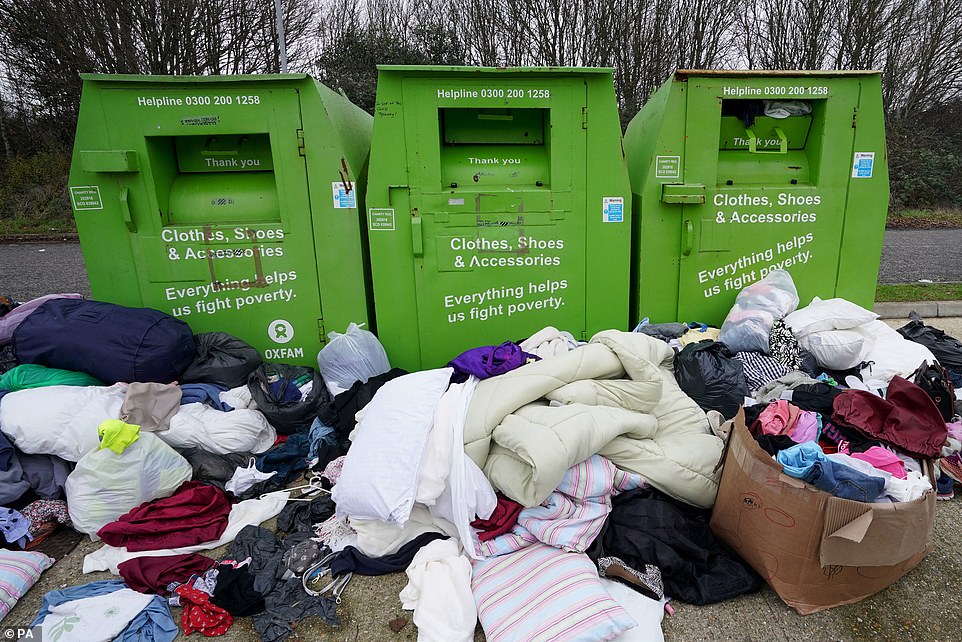 Clothes and other materials have been left outside Oxfam bins at an overflowing recycling point in Ashford, Kent, today 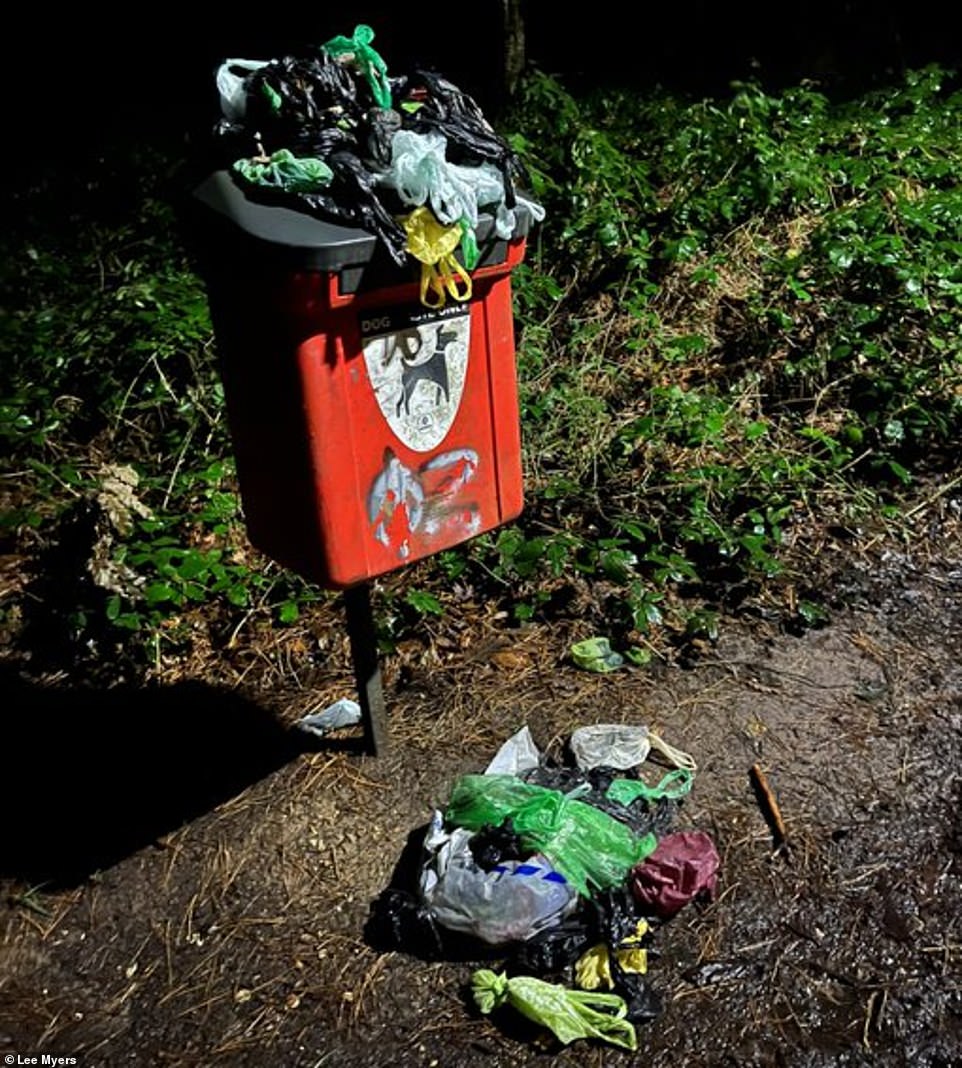 Covid-related staff shortages have also had a considerable impact on transport and healthcare, with many rail services cancelled and one in ten NHS staff off sick.

In the health service, one in ten NHS employees were not in hospitals on New Year’s Eve due to illness, according to official figures – but less than half had coronavirus, amounting to fewer than 50,000 of the 110,000 not in work.

Boris Johnson today batted away pleas for Covid self-isolation to be slashed to five days, warning it could make staff shortages even worse.

Calls have been mounting for the UK to emulate the US by trimming the period again to stop the economy and key services being crippled by absences.

However, the PM insisted that going below the current seven days could have the ‘perverse’ effect of speeding the spread, as three times more people would still be infectious when they return to workplaces.

On a visit to a vaccination centre in Stoke Mandeville today, Mr Johnson urged people to ‘stick to Plan B’ stressing that that Omicron is ‘plainly milder’.

But he cautioned that the health service will be under ‘considerable pressure’ for weeks to come, suggesting staff will be moved to plug gaps.

Asked about the idea of easing isolation rules – already reduced from 10 days as long as people are negative on lateral flow tests on day six and seven – Mr Johnson said: ‘We’ll continue to look at the infectivity periods, but the key thing is we don’t want to be releasing people back into the workplace when they’re still infectious.

‘And the risk is you’d increase the numbers of people going back into the workplace who are infectious by a factor of three. So you might perversely have a negative effect on the workforce if you see what I mean, so that’s the argument we’re looking at.’

James Jamieson, chair of the Local Government Association, told BBC Radio 4’s Today programme this morning: ‘There are existing pressures that were already there before Christmas – bins, due to a shortage of HGV drivers, that’s certainly been an area of pressure.

‘But our biggest concern is social care, because not only will we potentially see plenty more staff absences, we’re actually going to see more demand as the NHS seeks to discharge more people to hospital.’

He added that more ‘redeployment’ of workers would be required to minimise disruption to services in the event of a 25 per cent absence rate.

In recent days the number of NHS workers staying at home for Covid reasons has doubled.

NHS figures show that on December 12, NHS England recorded 12,240 staff absent due to Covid sickness or self-isolation. Two weeks later, on December 26, this had doubled to 24,632, and by New Year’s Eve it had doubled again to almost 50,000 – accounting for nearly half of all staff absences, The Sunday Times reported.

Chris Hopson, chairman of NHS Providers, said staff absences were having a greater impact than during last January’s Covid wave. He tweeted: ‘Staff flat out, especially given level of staff absences. We will need to ask them to perform flexible heroics again if hospital Covid numbers continue to rise. We can’t keep doing this.’

Rail firms all over the country have been removing hundreds of trains from their timetables in recent weeks as the Omicron isolation staffing crisis deepens for industries after days of short notice cancellations.

A total of 23 UK train companies from Southern to Merseyrail and Great Western Railway to Northern have either already reduced services or will do so in the coming days in response to pandemic-related staff shortages.

The Rail Delivery Group said nearly one in ten staff (8.9 per cent) across all UK train firms were off sick in the week to last Wednesday due to all causes including Covid – up from 8.7 per cent last week and 7.6 per cent last month.

It comes after analysis by ontimetrains.co.uk yesterday found passengers at Manchester Airport have been among the worst hit, where 30 per cent of scheduled services were axed on New Year’s Day.

On New Year’s Eve 30 per cent were also cancelled and 26 per cent on 30 December.

Operator Southern has announced that no trains will run into or from London Victoria, Britain’s second busiest station, until January 10. This is due to high levels of ‘coronavirus isolation and sickness’ among staff.

Many other operators have cancelled trains due to staff being off sick or isolating amid soaring Covid infections.

At least nearly one in ten rail staff across all train firms are thought to be off with Covid-related sickness.

He said this would avoid chaotic last-minute cancellations, adding: ‘These are harder for passengers to deal with and more likely to lead to overcrowding.’

A Rail Delivery Group spokesman said: ‘Our colleagues, like those in other industries, have been impacted by the virus.

‘While we’re working hard to provide a reliable train service to key workers and other passengers with reduced staff, some rail companies are introducing amended timetables owing to much less demand for train services.’